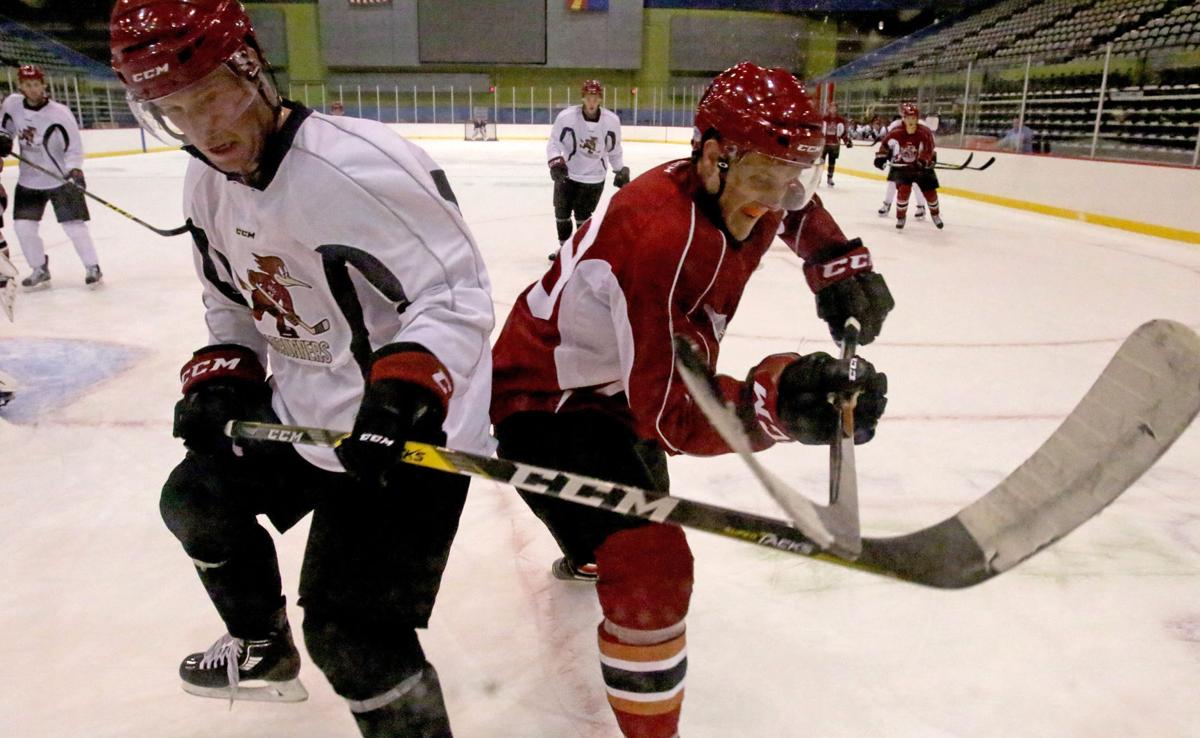 A couple of Tucson Roadrunners teammates crash into each other before skating into the glass while going after the puck during practice at Tucson Convention Center on Tuesday. The new AHL team will open its season Oct. 14 at the San Diego Gulls. 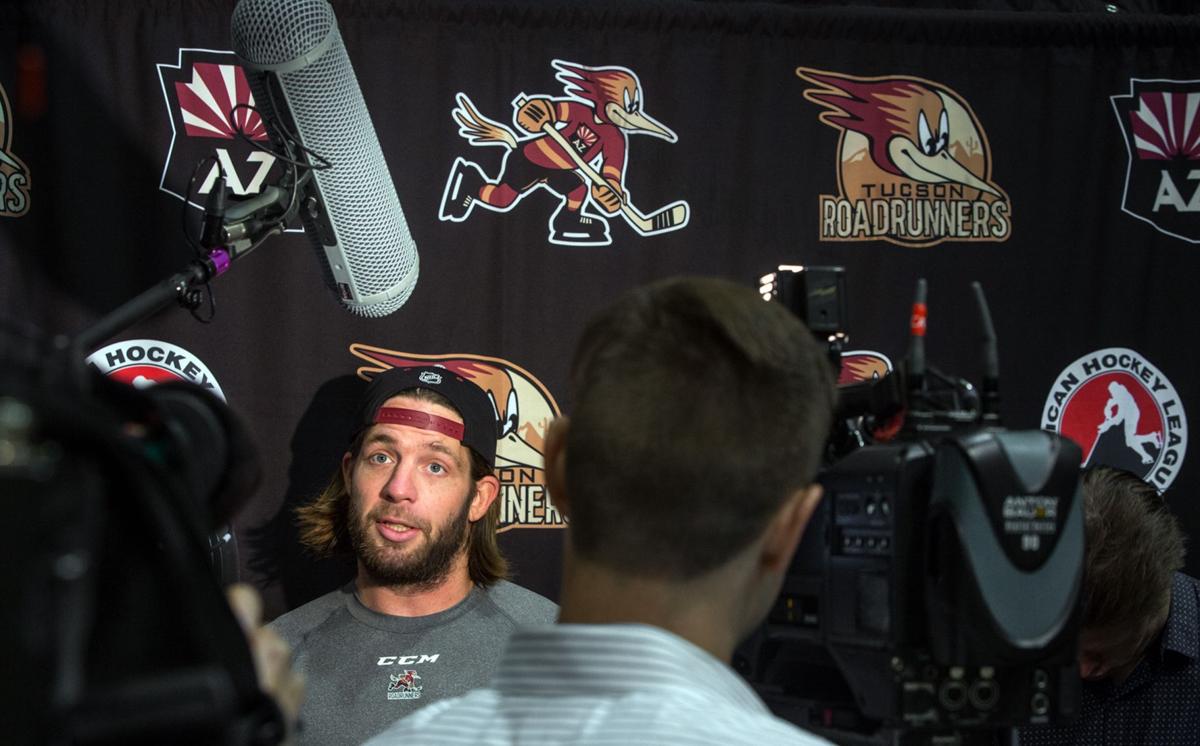 Tucson left wing Eric Selleck, talking to reporters on media day Tuesday, and the Roadrunners will start the season with three games on the road before the Oct. 28 home opener.

Nothing at the Tucson Convention Center Arena identifies the hockey team that is nine days from opening night. No logo. No pennant. No guy outside holding a 5-foot sign that says ROADRUNNERS TICKETS HERE.

The team’s first roster was printed early Tuesday morning. A goalie wearing jersey No. 31 was summoned for a press conference. The roster does not list No. 31.

A year ago, Hill played goalie for the Springfield (Massachusetts) Falcons of the American Hockey League. The Falcons went broke and went away, all the way to Tucson Arena.

Now they are called the Roadrunners.

They’re still working on the roster and a lot of other things.

“I came to Tucson for the first time in late May and walked through the arena and thought there’s not a chance they’ll get this place ready for opening day,” said Doug Soetaert, the freshly minted GM who arrived in Tucson on Saturday and, he said, “got the keys to the Cadillac.”

It does have the new-car smell.

On Tuesday, some of Soetaert’s words were unintelligible because ongoing construction at the Tucson Arena is often loud enough to disrupt a conversation.

The AHL kindly arranged a schedule to accommodate the Roadrunners’ move. They will take a mini-tour of California for two weeks, playing in San Diego, Stockton and Bakersfield, before opening at the Tucson Arena on October 28.

“You try to put names to faces,” said head coach Mark Lamb, who as recently as June 15 was the head coach and general manager of the Swift Current Broncos of the Western Hockey League. “A realtor asked me where I’m from, and I said Saskatchewan.

Bingo. This is all about hockey. The Roadrunners are the top affiliate of the NHL’s Arizona Coyotes, and to Soetaert, 61, and Lamb, 52, it’s all about developing players who will someday lead the Coyotes to a much-anticipated Stanley Cup.

As you would expect, the roster contains 18 Canadian-born players from such hockey-proud places as Trail, British Columbia; and Sault Ste. Marie, Ontario.

In three weeks, the hockey part of it will get a partner: Tucson. The Roadrunners will play 34 games at the Tucson Arena and if all goes well, about 150,000 Tucsonans, winter visitors and assorted puck-heads will pay to watch Tucson’s first pro hockey franchise since forever.

That’s being optimistic and then some, but the NHL brand carries weight in a town stocked with transplanted northerners.

This is a risky business in a town that did not support Triple-A baseball in big numbers ever. The Roadrunners are the hockey equivalent of a Pacific Coast League baseball franchise but there is one significant difference.

The Toros, Sidewinders and Tucson Padres played in the heat, during vacation time. That’s a business killer.

On Tuesday, Soetaert wore three layers as his new team practiced on the new ice at the Tucson Arena. He wore an outer jacket, an inner jacket and a polo shirt. Near the ice, it was probably no more than 55 degrees and dropping.

Hockey and Tucson. It seems like such an overdue idea.

The Coyotes couldn’t have hired more qualified people to run the Tucson operation. Soetaert and Lamb are hockey lifers.

Lamb grew up in Cadillac, Saskatchewan. Yes, that’s a place. It has about 80 people and the biggest establishment in the prairie town is the Cadillac Skating and Curling Rink.

Lamb became so good as a young hockey player that his family moved 50 miles to Swift Current where he could regularly play against talented juniors. Yada, yada, yada, Lamb played in 403 NHL games, was an assistant coach for seven seasons in the NHL and more recently went home to Swift Current to coach the hometown team.

Coaching in Tucson is a significant change. Swift Current has about 17,000 people, and although hockey is the undisputed king, the Credit Union iPlex seats about 2,500. If the Roadrunners don’t average closer to 4,000, this will be a disappointment.

Soetaert grew up in hockey-centric Edmonton, played 12 seasons in the NHL, including one as a goalie for the 1986 Stanley Cup champion Montreal Canadiens. He spent nine years as general manager of the WHL’s Everett (Wash.) Silvertips and knows what it is to put a good product on the ice.

Everett was so hungry for pro hockey that it built an $80 million, downtown arena that seats 8,000.

“It was the biggest thing in town,” said Soetaert. “Still is.”

Hockey won’t be the biggest thing in Tucson, but if all goes well, the Roadrunners will become the Next Big Thing.

Get a jacket. You’re gonna need one.

A couple of Tucson Roadrunners teammates crash into each other before skating into the glass while going after the puck during practice at Tucson Convention Center on Tuesday. The new AHL team will open its season Oct. 14 at the San Diego Gulls.

Tucson left wing Eric Selleck, talking to reporters on media day Tuesday, and the Roadrunners will start the season with three games on the road before the Oct. 28 home opener.