Hansen: Tucson Roadrunners' home opener, ready or not
Share this
1 of 2 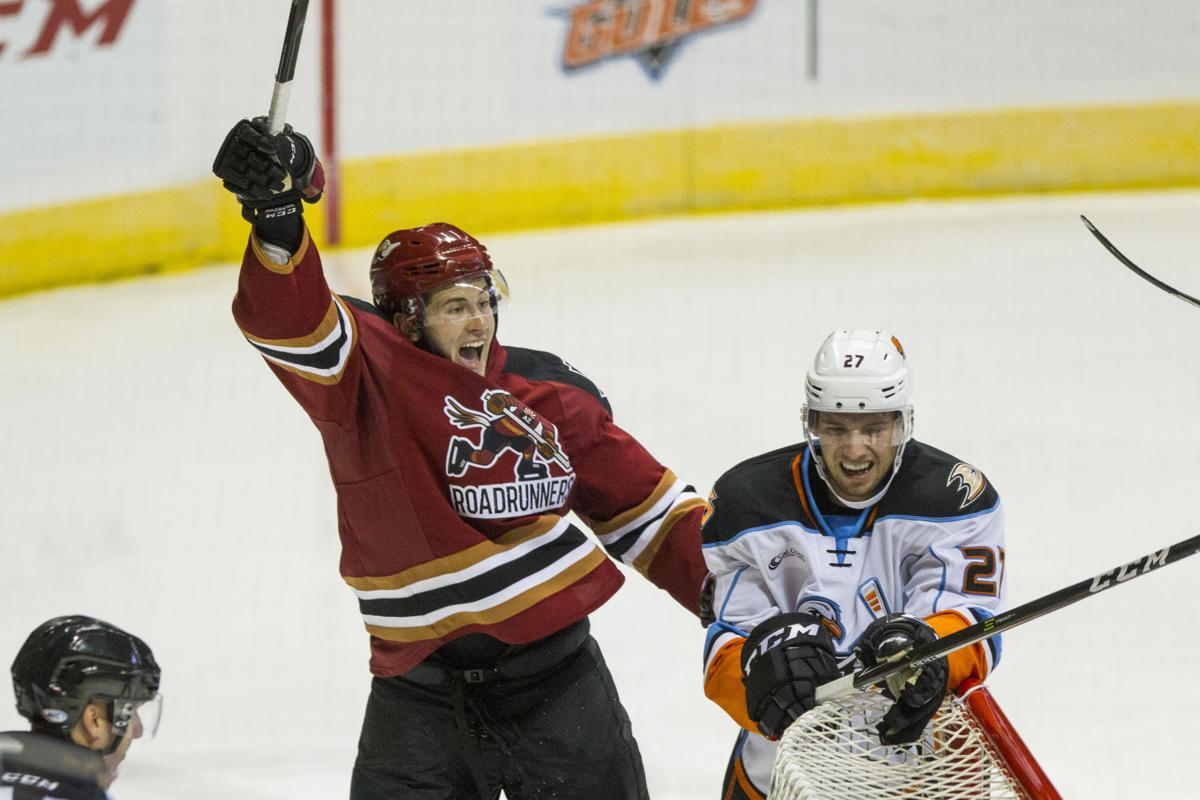 The Tucson Roadrunners, which began organizing as a franchise only in June, opened its schedule on the road Oct. 14 against the San Diego Gulls. Tucson’s home opener is Friday. 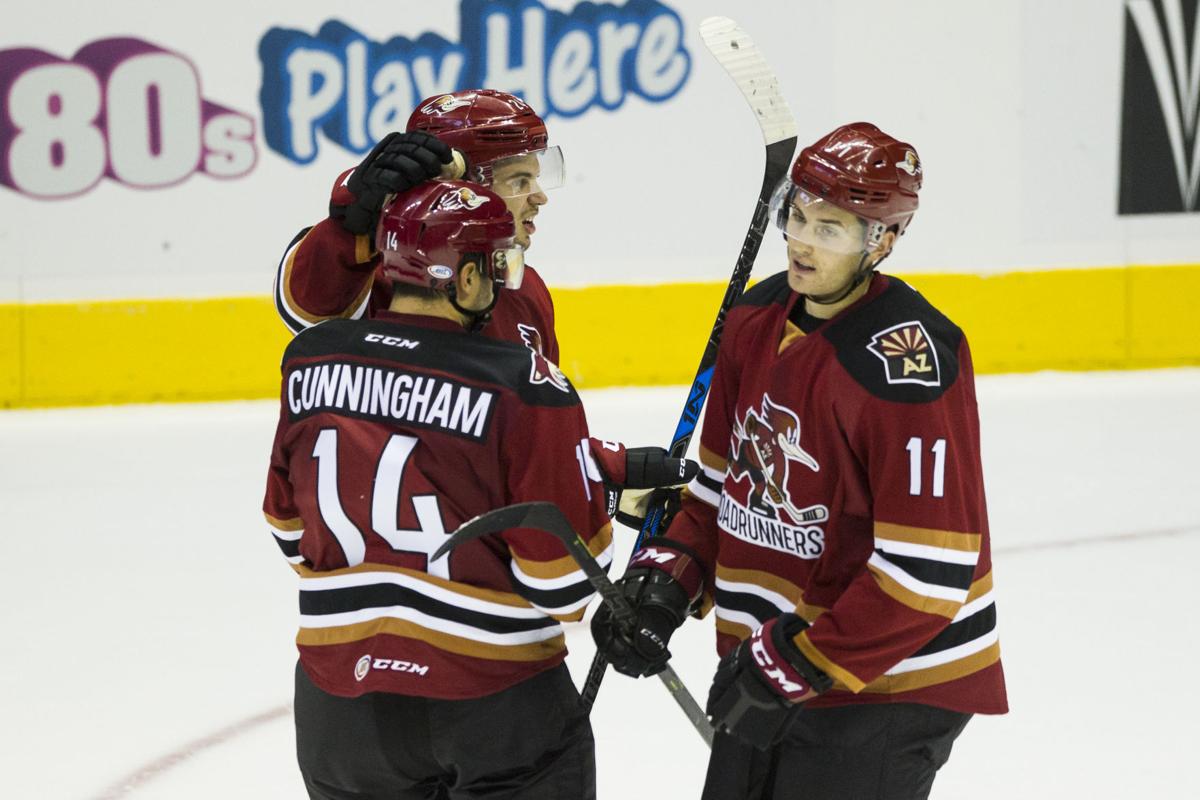 Because the Tucson Arena isn’t available every weekend, the Roadrunners will play six Wednesday-night games and have only two home games between Jan. 29 and March 16.

The president of the Tucson Roadrunners climbed his way through the hockey ranks by working for minor-league teams known as Mallards, Iguanas, GlacierCats, SteelHounds, Grizzlies and Fire.

Once, as executive vice president of the Quad City Mallards, Hoffman solved a day-after-Christmas marketing crisis by arranging for the Stanley Cup to be brought to the game. A sellout crowd of 6,591 attended.

Sometimes it didn’t work as well.

As a young broadcaster for the Arkansas GlacierCats, playing at an old fairgrounds pavilion, Hoffman learned the franchise was in jeopardy when another Little Rock hockey team, the Arkansas RiverBlades, became a key tenant at new Alltel Arena.

Hoffman arrived in Tucson in early August, was told that opening night was Oct. 28 and introduced himself to a franchise full of strangers.

The roster is a geographical puzzle, from 33-year-old Zbynek Michalek of Jindrichuv Hradec in the Czech Republic to 20-year-old Brendan Perlini of Guildford, England.

“I didn’t have any contacts when I got to Tucson,” says Hoffman, “but I’ve been thrilled with the response.”

Ready or not, the Roadrunners open Friday night at the Tucson Convention Center Arena against the Stockton Heat. Hoffman’s answer: “Ready.”

The Tucson Arena holds about 6,500 for hockey, not much different than it was in October 1975 when the city’s first minor-league hockey team, the Tucson Mavericks, opened to a crowd of 2,690 and averaged 2,187 in the old Western Hockey Association.

Tucson’s first foray into hockey was a sports disaster. The Mavericks opened the season 1-12-1 and fired coach Adam Keller. The Mavericks finished 14-53-9 and allowed the most goals in league history, 396.

A bare 1,451 attended the final home game. The Mavericks were dissolved.

That sad history lesson shouldn’t come into play for the 2016 Roadrunners, who are financed by the NHL’s Arizona Coyotes and have benefited from a $3 million redo of hockey facilities at the Tucson Arena. Moreover, Tucson’s population has probably doubled in the last 40 years.

This isn’t a Ma and Pa operation; the business side of the Roadrunners lists 13 sales/tickets employees and a front-office staff of 20.

The Roadrunners didn’t begin putting an organization together until June. That’s hardly a preferred way to do business, but the Coyotes don’t play by a traditional clock. Much like Tucson’s former Triple-A baseball franchises, Job 1 is developing players for the big leagues, not filling a minor-league arena.

But if done properly, it works both ways, for Tucson and Phoenix.

The Roadrunners are somewhat handicapped this season because, on short notice, the Tucson Arena wasn’t available every weekend. From March 3-5, for example, a Monster Truck Jam will displace hockey. From Feb. 9-12, a gem-and-mineral show, Mineral Treasures of the Midwest, will fill the Convention Center. And so on.

That’s why the Roadrunners will only have two home games in a 48-day period from Jan. 29 to March 16. And it’s why they will play six Wednesday-night games, beginning next week.

In 1975, Tucson Mavericks general manager Merle Miller, who was also the first general manager of the Tucson Toros, was asked to make a go of a hockey season on short notice — three months — which is exactly what Hoffman is asked to do now.

It was such a rush that the Mavericks even changed their name a few weeks before the opener — it had initially been the Banditos — and played in a not-ready-for-hockey TCC, which was not equipped with lockers for players’ equipment.

The ’75 Mavericks mostly piled their skates on the floor.

The ’16 Roadrunners have a new locker room that Hoffman says is “NHL quality.”

So at least the skates will have a proper home.

Initially, the Roadrunners hired Brian Sandy, an executive in Learfield Sports’ college marketing system, as their president. But after a few weeks, he resigned to attend to a health-related issue in his family.

On short notice, Hoffman became the club’s president. Talk about depth on the roster. For eight years, Hoffman had been the director of operations for the old Central Hockey League, a confederation of hockey towns all over the map, from the Saint Charles Chill to the Corpus Christi IceRays.

Now Hoffman can focus entirely on the Roadrunners. Advantage, Tucson.

The Tucson Roadrunners have a new mascot with a dirty name.

The Tucson Roadrunners, which began organizing as a franchise only in June, opened its schedule on the road Oct. 14 against the San Diego Gulls. Tucson’s home opener is Friday.

Because the Tucson Arena isn’t available every weekend, the Roadrunners will play six Wednesday-night games and have only two home games between Jan. 29 and March 16.