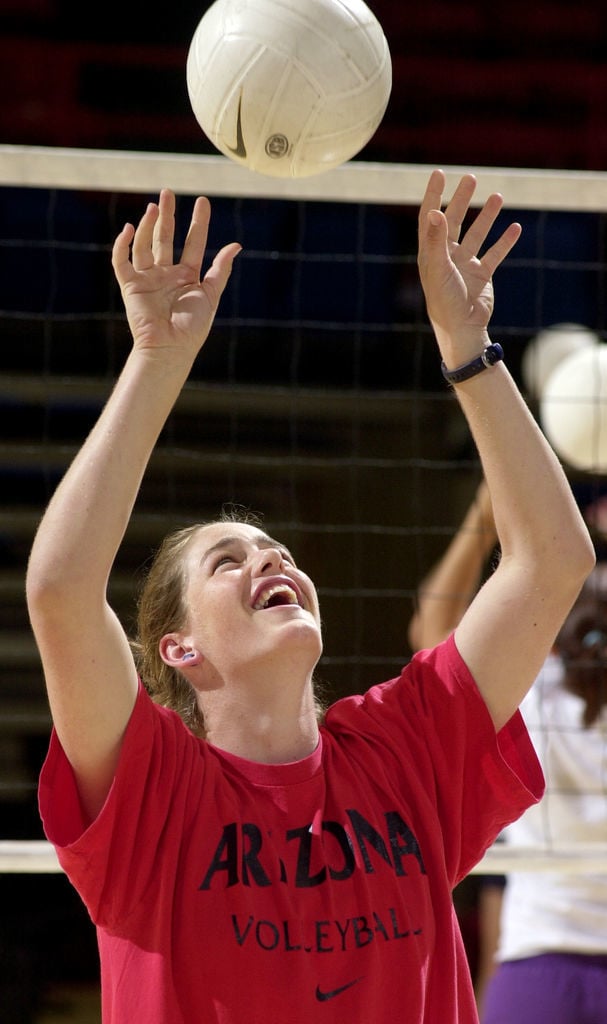 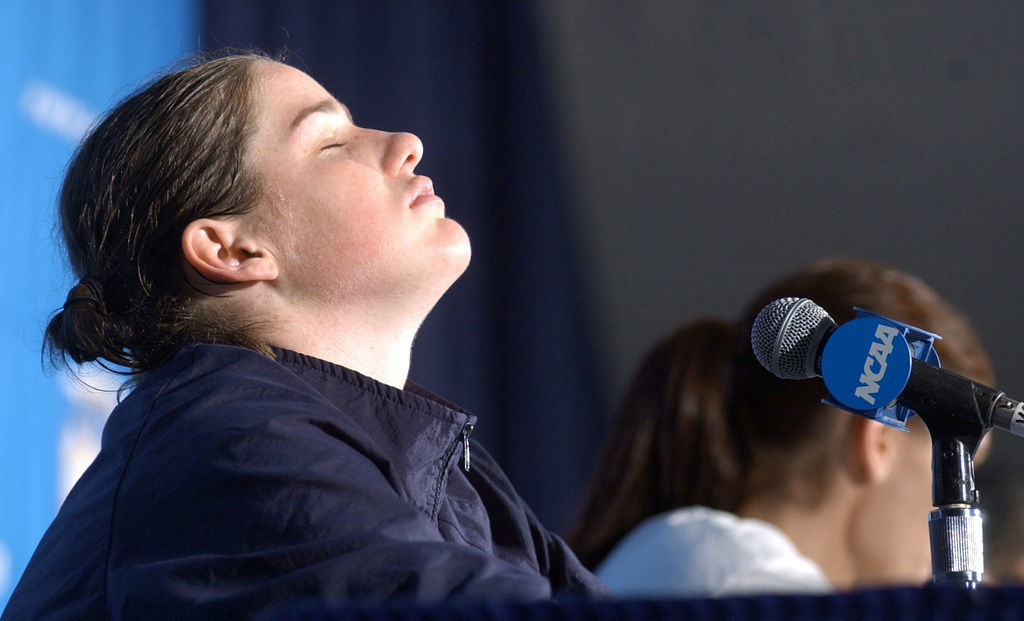 UA All-American Dana Burkholder suffers through a head cold during a press conference following the team’s practice Wednesday morning at the Cox Arena on the SDSU campus in San Diego, CA in preparation for the Wildcat’s Final Four semi-final game against Long Beach State. Photo by David Sanders. 12/12/01. #94090.

In the era of the fax machine, letter-of-intent day on college campuses were a lot like those in Dave Rubio’s Arizona volleyball office, 1998.

When Rubio entered his McKale Center office on letter-of-intent day, he expected a program-changing fax from Dana Burkholder, probably the nation’s No. 1 setter prospect, a Bakersfield, California, whiz who had told Rubio she planned to sign with Arizona over USC, UCLA, Ohio State and Wisconsin.

No fax arrived. On the worst possible day, the fax machine in Rubio’s office failed. It took a full day for Burkholder’s binding letter-of-intent to reach the coach’s hands.

Once delivered, Rubio compared Burkholder’s potential impact to that of Arizona basketball All-American Mike Bibby, who had helped the Wildcats win the 1997 national championship.

Bingo. Four years later, Burkholder, a two-time first-team All-American, led Arizona to volleyball’s Final Four. A year earlier, she was the key part of Arizona’s first (and only) Pac-10 championship.

It all came true.

Now, director of the vast Forza 1 volleyball organization in Southern California, a performance and training center with more than 60 coaches and 1,000 athletes, Burkholder speaks of her Arizona days modestly. True to her role as a setter, it’s about the team, not about Dana Burkholder.

But one thing does draw a tone of awe from the Bakersfield High School graduate.

When reminded she was the 2000 Pac-10 Player of the Year, sandwiched by 1999 winner Kerri Walsh and 2001 winner Logan Tom — perhaps the two leading volleyball players in conference history — Burkholder momentarily grows silent.

“They were at the top,” she says. “I’m fortunate to be in that type of company.”

Burkholder, now 39, graduated from Arizona with degrees in art history and creative writing but really never considered a life that didn’t include volleyball.

“I spent a year working for a newspaper — Bear Essential News for Kids — mostly in ad sales and as an ad rep, but I definitely wanted to be a coach,” she says. “Dave was such a good role model; it has been a rewarding way to make a living.”

Forza 1 is a titan of the youth volleyball industry in Southern California. Burkholder directs training centers in Pasadena, Hemet, Ontario and Temecula, which is her day-to-day headquarters.

There are so many moving parts — so many travel teams, training sessions and weekend tournaments — that Burkholder isn’t likely to be spotted on the beach near her childhood home in Mission Viejo.

“I’ve learned to create time and space for myself; I don’t have typical time off that others do — weekends are very busy — but I do my best to refuel,” she says.

“A lot of coaching is giving of yourself, it’s what I enjoy. It’s what I wanted.”

How did Arizona land a franchise-type recruit of Burkholder’s level?

Part of it was that Burkholder’s summer league club coach, Jennifer Nickels, played for Rubio’s Cal State Bakersfield teams of the early ’90s. Part of it was Burkholder was impressed by the way Rubio had built Arizona’s program into a steady Pac-10 contender.

The recruiting class of 1998 included Burkholder and San Diego’s Jill Talbot, who was also a first-team All-American in Arizona’s Final Four season of 2001. It was a right-place, right-time scenario.

The ’01 Wildcats went 14-4 in the Pac-10, surely the most difficult conference in women’s college volleyball, finishing No. 3 behind 17-1 Stanford and 16-2 USC. But the Wildcats got a second shot at USC in the Elite Eight. It was probably the most significant volleyball match in Arizona history.

“It was a one of those breakthrough moments you dream about,” Burkholder says now. “We were behind in the fifth game, and I don’t think many people gave us much of a chance. I remember thinking ‘I don’t know if this is going to happen,’ but all of a sudden we turned it around and won. I was awestruck.

Arizona will remember Burkholder, too. The Wildcats went 96-28 in her career. She ranks No. 1 in five career statistical categories, the most impressive of which is 5,424 assists. That’s 212 more than anyone else in school history. It would be almost impossible to pick the top volleyball player in UA history — Talbot, Kim Glass, Madi Kingdon, Caren Kemner and Melissa McLendon were either first-team All-Americans or Olympians — but Burkholder is in the conversation.

After graduating from Arizona in 2002, Burkholder became the boys and girls head volleyball coach at Mountain View High School, spent two years with the USA Volleyball program, played professionally in Italy and even served as one of Rubio’s assistant coaches, in 2005-06.

“I competed so hard in college that by the time 2004 rolled around, I felt like my competitive drive had subsided a bit,” she says. “As much as I enjoyed training with the national team — I felt I was at the level that I could’ve made the Olympic team — I just didn’t make the commitment needed. You have to give your life to the sport, and I had already done that in college. I moved on. I have no regrets.”

Throughout the summer, Star columnist Greg Hansen is catching up with some of the most notable names in Tucson history. This story is another in a series scheduled to run Sundays and Wednesdays in the Star.

Visit Tucson.com/Hansen to read Greg Hansen's summer-long series. So far, he has focused on

• Phil Ferranti: Golfer turned restauranteur might be the most interesting man in the world.

• Sheila Baize: Former TUSD administrator enjoying life on the links after a career spent being "the heavy."

Where are they now? Ron Beyer 'learned to deal through adversity' as UA football standout

JC football fallout: New league brings hope that the sport can be revived in Arizona

The Hohokam Junior College Athletic Conference, featuring four teams in Maricopa County and one in Tucson, is set to begin play Aug. 24.

Colin Schooler and Tony Fields have been paired together ever since their freshman season at Arizona in 2017. Recently the UA's junior linebac…

Where are they now? Jim Arneson played for Cats, Cowboys before becoming home-building titan

UA All-American Dana Burkholder suffers through a head cold during a press conference following the team’s practice Wednesday morning at the Cox Arena on the SDSU campus in San Diego, CA in preparation for the Wildcat’s Final Four semi-final game against Long Beach State. Photo by David Sanders. 12/12/01. #94090. 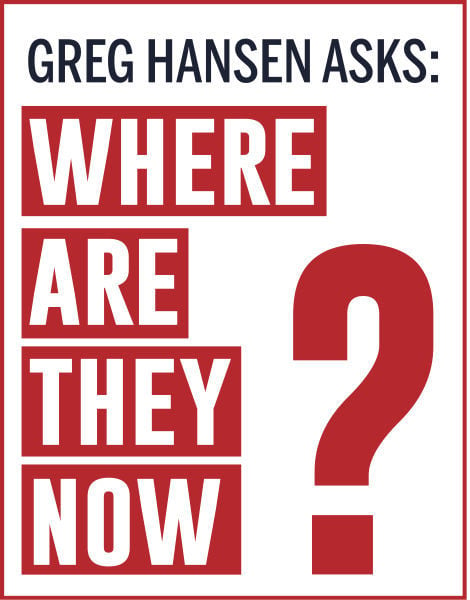