Editor’s note: The Star is counting down the 22 best high school football players in Southern Arizona.

Who he is: Ask any high school football coach whether they want players wrestling during the offseason, and there’s a good chance most — if not all — will say yes.

Cienega coach Pat Nugent couldn’t recall a running back ever wrestling before Levy, who was the state runner-up in his weight class.

“Gabe is a beast. … He’s gotten bigger, stronger, faster and is just an absolute animal,” Nugent said. “He’s going to run over you instead of around you. He’s so strong and physical and that’s his mentality. He breaks tackles and it’s tough to break him down.”

The elements of wrestling have improved Levy’s overall skillset as a running back.

“Wrestling helps me a lot with balance, conditioning, teaching me to shrug off tackles and stabilize when I get hit after contact so I stay on my feet,” Levy said.

Levy started the 2019 season playing linebacker and running back before moving exclusively to offense. In 11 games, Levy rushed for 982 yards and seven touchdowns.

Levy said although he performed at a high level as a junior, his “biggest weakness was not catching out of the backfield.”

During the offseason, Levy met with Cienega quarterback Ryan Swoger and other skill-position players to work on running routes and pass-catching.

The hard-nosed runner hopes to become a versatile weapon for the Bobcats and finally break 1,000 yards, which hasn’t been done by a Cienega running back since Francisco Dicochea in 2014.

“Last year was a decent season, we still need to work on some things, but I feel like this year will be a whole lot better,” Levy said. “I definitely could’ve rushed for over a 1,000 yards; I just needed to work on a couple things. … I’m just hoping I could rush for 1,000 yards.”

Proof he’s good: Levy was named the Star’s Player of the Week following his performance against Rincon/University on Sept. 20, 2019. Against the Rangers, Levy rushed for 145 yards and touchdowns on just seven carries. Levy currently holds scholarship offers from Washburn, Sioux Falls and the University of Mary.

He said it: “I don’t even know if we knew who he was as a freshman, and he’s just developed. We always looked at him as a wrestler-type kid, but in the last two years, he’s been one of our stars. … He’s got an opportunity to be a great player.” — Nugent.

Salpointe Catholic 29, Casa Grande 21: Running back David Cordero had the signature moment, scooping a low throw from Treyson Bourguet inches from the turf on fourth-and-8 from around midfield.

Cordero scampered across the first-down mark, and a few plays later Salpointe punched in a 1-yard touchdown to take a 29-14 lead.

Quarterback Treyson Bourguet, an Arizona commit, provided some awe-inspiring moments, including a 35-yard touchdown pass in the corner of the end zone to receiver Elijah Barclay. He finished 7 of 10 for 94 yards with one touchdown.

First-year coach Eric Rogers put the offensive workload on the shoulders of Cordero and running back Anthony Wilhite. They each had their moments, as Cordero ran for 115 yards on 14 carries and Wilhite added 51 on nine rushes.

Lovett carried the ball five time. Every rush went for either a big gain, first down or touchdown. He scored two touchdowns.

“It felt great to finally be back,” Lovett said. “Iron sharpens iron, so we’ve all been encouraging each other this week.”

The speedy three-star tailback took his first carry of the 2020 season 60 yards for a touchdown, and the Lions handily dispatched Eastmark in their season opener.

High schools countdown: Sabino's Luke Thompson is a ball-hawk with a chance to do more as a senior

Montana Neustadter’s passing statistics don’t jump off the page compared to some of the other quarterbacks in Southern Arizona. But there may not be a better dual-threat quarterback around.

Arizona brings in nine new players this year to go with only four returning players that have seen playing time for the Wildcats.

With Bijan Robinson gone, Salpointe Catholic is hopeful its one-two punch in David Cordero and Anthony Wilhite will lead the Lancers back to the Open Division playoffs this season.

The Lancers' game against Sierra Vista Buena, originally scheduled for Friday, has been rescheduled for Oct. 23. The team's Oct. 16 game against Phoenix Pinnacle may have to be canceled because of Pinnacle's full schedule, athletic director Phil Gruensfelder said.

The Star is counting down the best high school football players in Southern Arizona, in no particular order. Today: Sunnyside's duo of Anthony “Guero” Galvez and Andrew Gonzales.

High school football is back, and here's a look at every Tucson team's 2020 schedule

Canyon del Oro defensive end Chase Randall is expected to be one of the top defensive linemen in Southern Arizona this season.

Sahuaro High School running back Trevion Watkins started playing football just three years ago, but the Houston product has emerged as one of the top running backs in Southern Arizona.

Salpointe Catholic running back David Cordero waited his turn and now is in position to put up big numbers for the Lancers.

As a little boy, Skaggs dreamed of having his name on the back of a purple and gold jersey and the distinction of being QB1 for the Sabercats. Now, he's it. 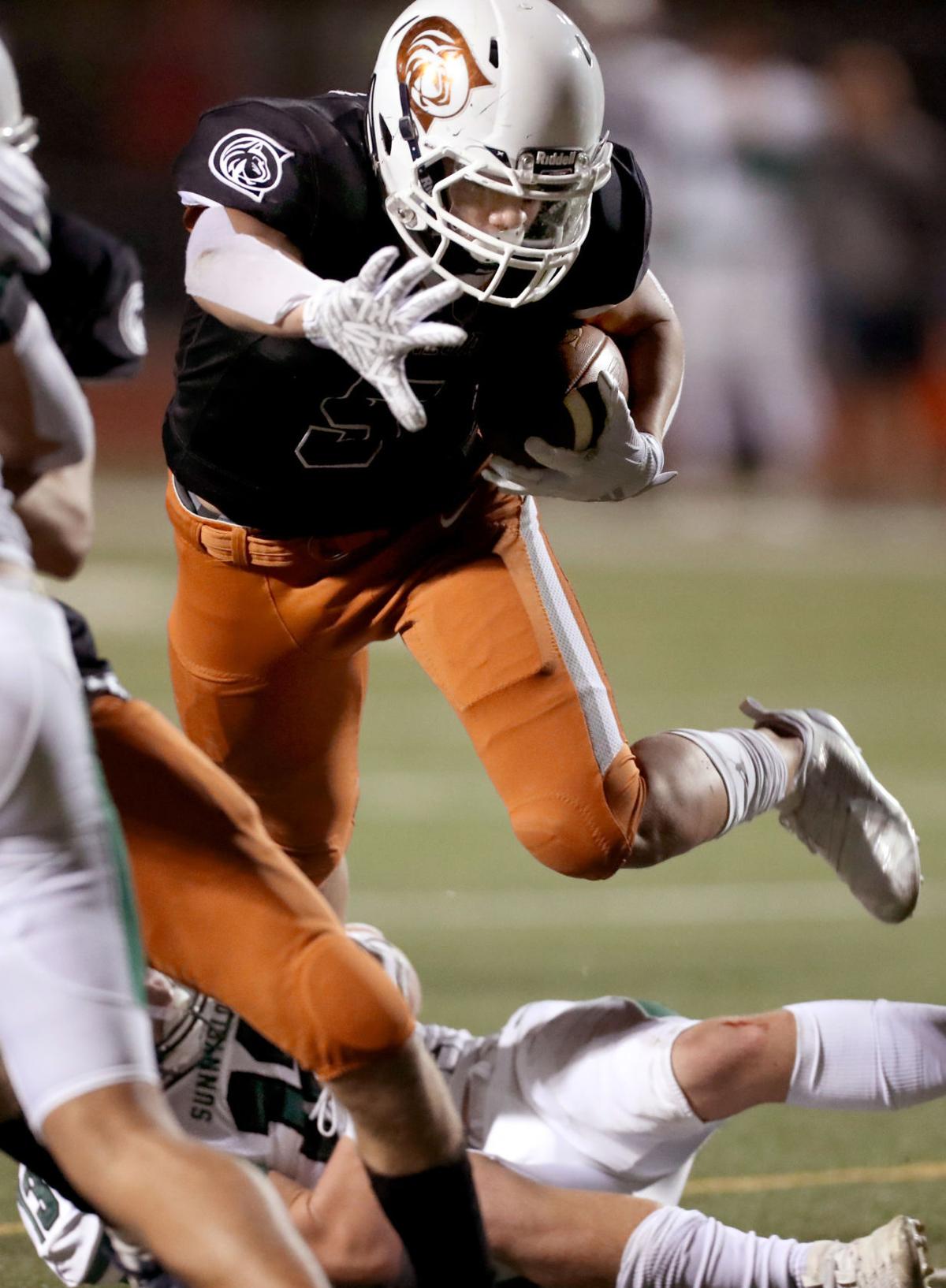 Cienega's Gabe Levy (5) sidesteps his way over Sunnyslope's Ashton Yurkiw (13) as he bulls inside the Viking five in the second quarter of their first round game in the 5A State Championships, Tucson, Ariz., Nov. 8, 2019. 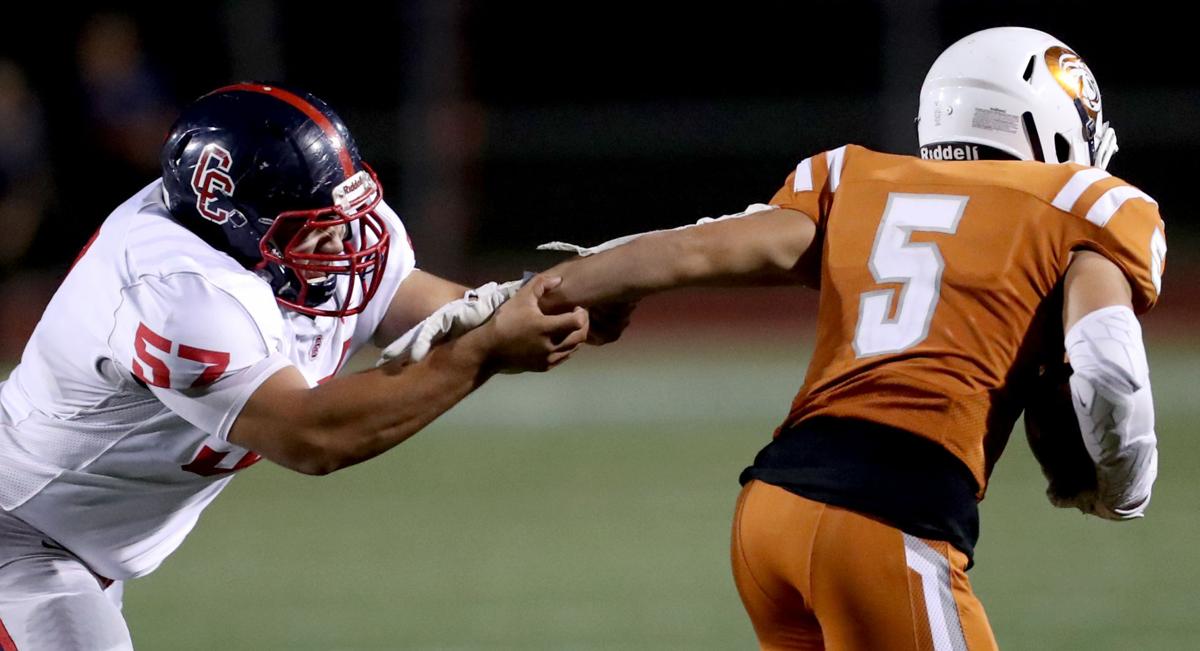 Cienega’s Gabe Levy (5) wrestles during the offseason, learning skills that help him run over — and not around — defenders.