From getting the lights to turn on to holding off a pesky Casa Grande team, everything was an adventure for Salpointe Catholic as it opened its football season Friday with a 29-21 victory at home.

Unlike last year's Lancers, often "Bijan (Robinson) or Bust," this year's opening win came on the back of countless key contributors. Robinson's protégé, running back David Cordero, had the signature moment, scooping a low throw from Treyson Bourguet inches from the turf on fourth-and-8 from around midfield.

Cordero scampered across the first-down mark, and a few plays later Salpointe punched in a 1-yard touchdown to take a 29-14 lead.

Already with a lead and his defense playing well, the decision to go for it was a curious one from new coach Eric Rogers with about four minutes left in the third quarter. But the message to his new team was unmistakable.

While Bourguet, an Arizona commit, provided some awe-inspiring moments, including a 35-yard touchdown pass in the corner of the end zone to receiver Elijah Barclay, he also seemed out of sync with his receivers, perhaps due to chaotic offseason due to COVID-19. He finished 7 of 10 for 94 yards with one touchdown.

That put the offensive workload on the shoulders of Cordero and running back Anthony Wilhite. They each had their moments, as Cordero ran for 115 yards on 14 carries and Wilhite added 51 on nine rushes.

"Those two are phenomenal running backs," Rogers said. "Bijan is obviously Bijan, but those two have worked their tails off. They're going to be great all year long, and we're going to keep using them."

Cornerback Kamden Gambrell gave Salpointe its first lead, 14-7, with a 35-yard interception return for a touchdown early in the second quarter, but Salpointe was never able to pull away. That might be a sign of things to come as Rogers hopes to get the most out of this gritty edition of the Lancers.

Since the Pac-12 allowed its teams to match college basketball’s new start date of Nov. 25 last week, the Wildcats have pulled out of the NIT Season Tip-Off while postponing marquee road games at Gonzaga and Illinois until 2021-22.

A Q&A with the four-year starter at right guard for the UofA, who is in the beginning stages of what hopes is a long coaching career.

FC Tucson president Amanda Powers and director of operations Jon Pearlman said this week that the incident involving Phoenix Rising FC with the parent club is in no way is reflective of their team's values.

Check out scores from the few Southern Arizona teams that played the first week of the high school football season Friday night.

The speedy three-star tailback took his first carry of the 2020 season 60 yards for a touchdown, and the Lions handily dispatched Eastmark in their season opener.

With Bijan Robinson gone, Salpointe Catholic is hopeful its one-two punch in David Cordero and Anthony Wilhite will lead the Lancers back to the Open Division playoffs this season.

The Lancers' game against Sierra Vista Buena, originally scheduled for Friday, has been rescheduled for Oct. 23. The team's Oct. 16 game against Phoenix Pinnacle may have to be canceled because of Pinnacle's full schedule, athletic director Phil Gruensfelder said. 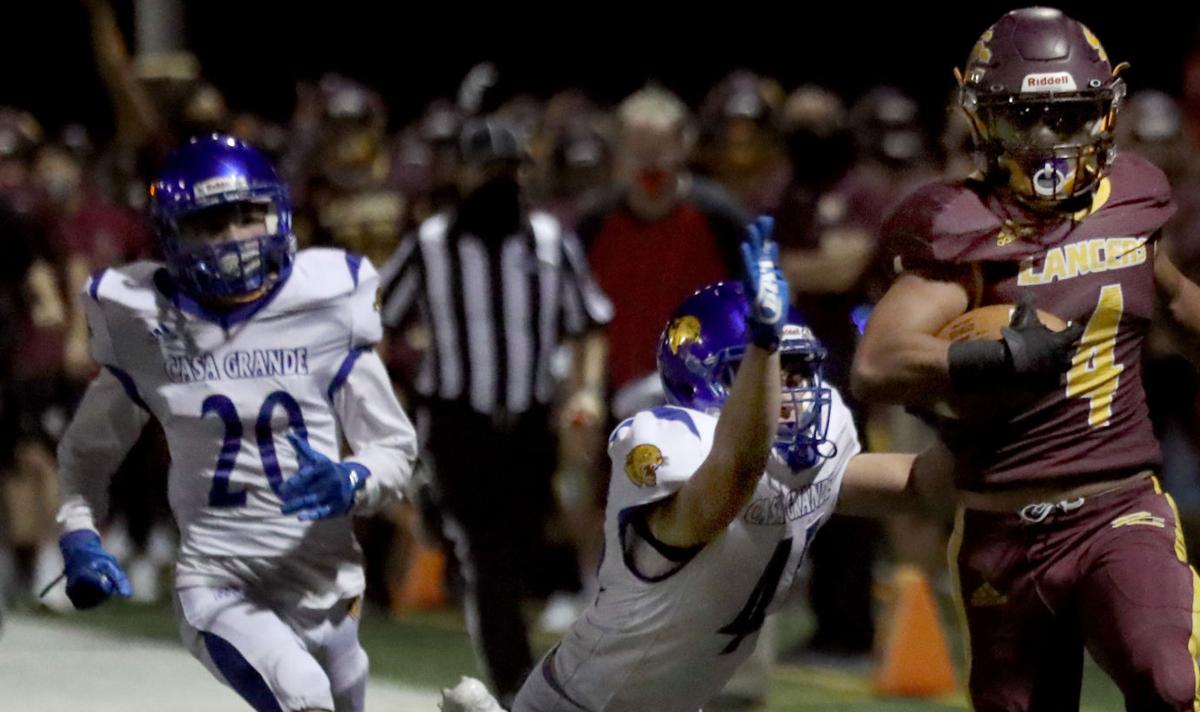 Salpointe's David Cordero (4) skips down the sideline to pick up 46 yards and get the ball inside the Casa Grande five in the third quarter of their game at Salpointe, the opening night of high school football, Tucson, Ariz., October 2, 2020. 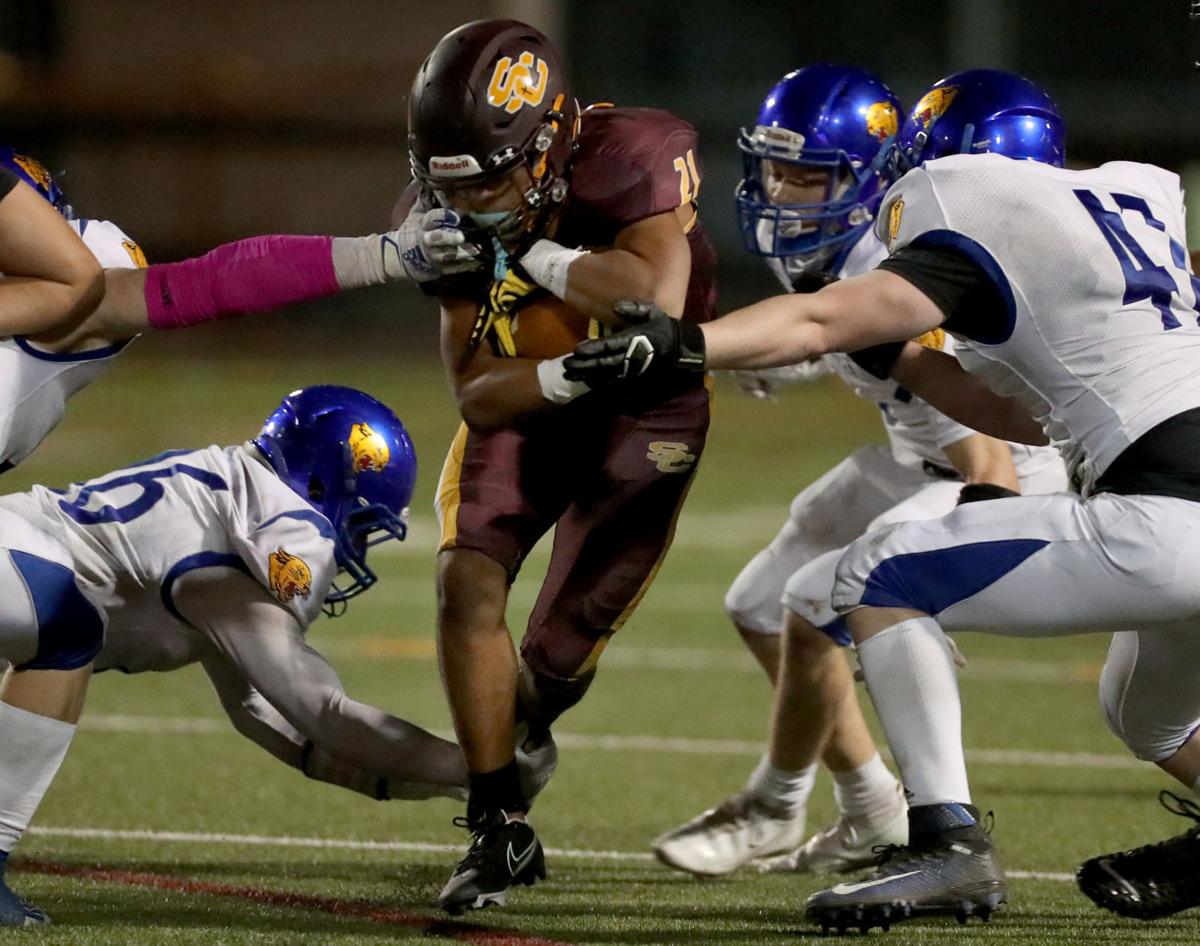 Salpointe's Anthony Wilhite (21) finds just enough daylight to squeeze out a first down late in the fourth quarter against Casa Grande at Salpointe, the opening night of high school football, Tucson, Ariz., October 2, 2020. 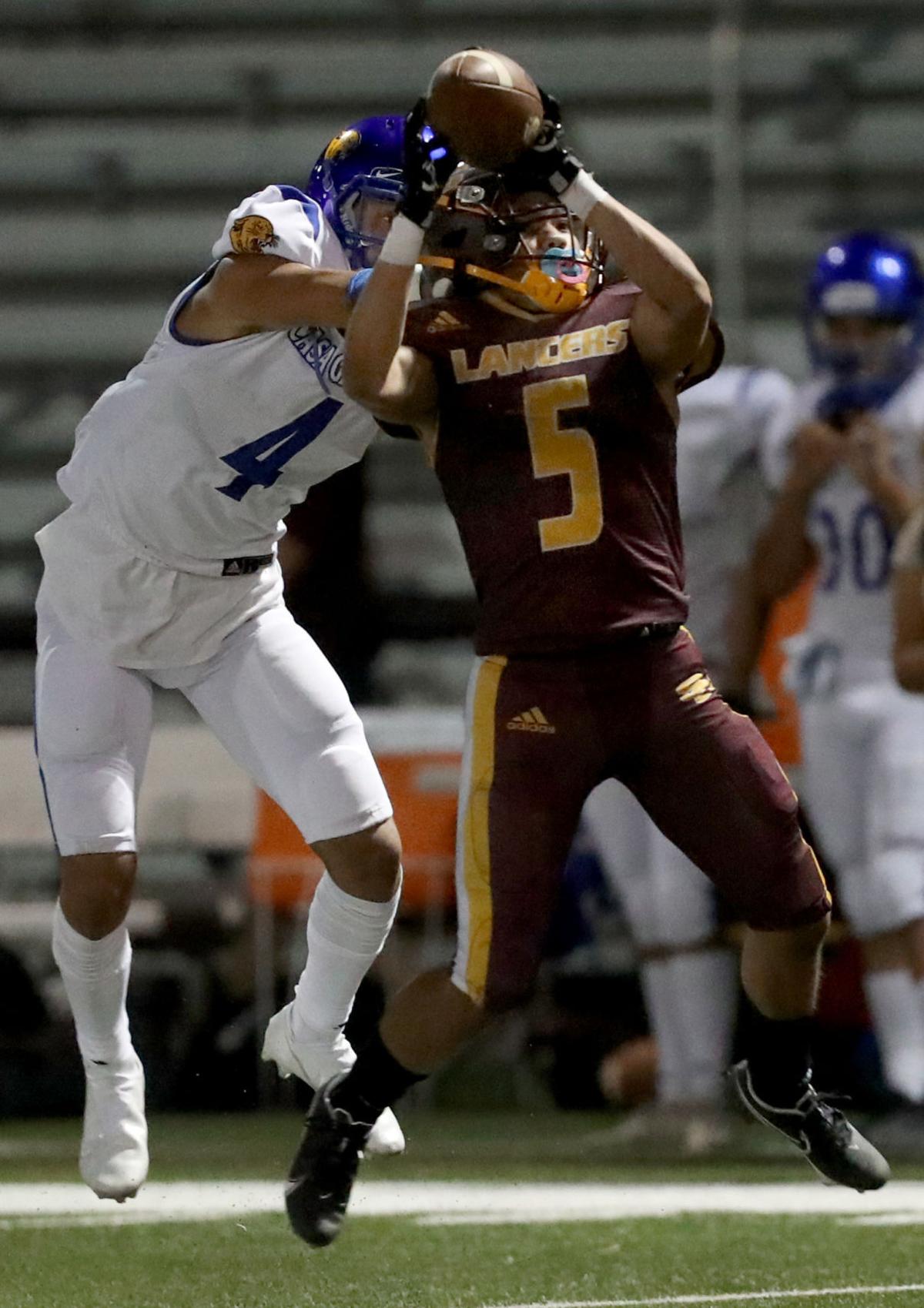 Salpointe's Kam Gambrell (5) steps in front of Casa Grande's Anthony Flores (4) for what turned into a pick-six in the second quarter of their game at Salpointe, the opening night of high school football, Tucson, Ariz., October 2, 2020.