With 31 seconds left in the fourth quarter and Cienega driving to tie the game, Bobcats coach Justin Argraves dialed up a throw to the end zone from Salpointe Catholic’s 26-yard line.

Just 11 minutes ago, his team was down 30-7. Now, they had a chance to send the game to overtime.

But Cienega quarterback Brayden Cherry lofted the jump ball in the end zone just a tad too far for his 6-foot-5 tight end Brody Kallman and the pass was intercepted at the goal line. A comeback for the ages ended just inches short.

Salpointe scrapped by 30-22 over Cienega in a frenetic finish during Thursday night’s tilt in Vail. Facing deficits of 23-0 in the third quarter and 30-7 in the fourth quarter, the Bobcats fought back in their third game under Argraves.

“They could have easily hung their heads tonight when we got down,” Argraves said. “But we battled. We grew up tonight as a team.”

Salpointe corner Antonio Martinez played defensive hero on the final drive. The 5-10 corner ran stride for stride with the taller Kallman and put himself in the right spot to have enough separation to grab the interception in the end zone and take a knee.

“They put their biggest receiver on me so I knew they were going to come my way,” Martinez said. “I just saw the ball, we both went up for it and fortunately I came up with it and ended the game.”

The Lancers survived their first scare of the season after the season-opening 56-0 thrashing of Canyon del Oro. It’s also the first time Salpointe’s been involved in a one-possession game since Oct. 30 of last season against Gilbert Campo Verde.

“That’s high school football at its finest,” Salpointe coach Eric Rogers said. “We knew we were going to be in a battle and we had to find a way to make a football play at the end of the game.”

After the first 2½ quarters, it looked like it was going to be another runaway Lancers victory. An 8-yard touchdown pass from quarterback Treyson Bourguet to running back Dailan Goodman put the Lancers up 23-0 with 6:03 in the third quarter.

But Cienega slowly started to claw back into it.

On the ensuing drive, Cherry led the team down the field on a 75-yard drive that ended with a 5-yard score from running back Ritchie McCormack to make it 23-7.

Salpointe answered back with a perfectly placed ball from Bourguet down the sideline to Bryce Robinson for a 48-yard touchdown to make it 30-7 at the beginning of the fourth quarter.

Bourguet ended the night 12 for 19 with 213 yards and three touchdowns. He also added a score on the ground in the first quarter. Robinson’s third-quarter TD marked his second of the night.

After a Cienega punt on the next drive, the game started to feel out of reach until the team’s defense made two game-altering plays. An errant snap out of the reach of Bourguet went up for grabs and the Bobcats defense pounced on it deep in Lancers territory.

Cienega’s offense responded with a McCormack punch-in near the goal line to make it 30-14 with just over six minutes to go.

On the next series, Cienega’s Cole McFarland sacked Bourguet on third-and-long to force a punt that was returned all the way back to Salpointe’s 20-yard line. A few plays later, Cherry hit receiver Keron Watson for a 10-yard TD and then converted the extra point to make it a 30-22 game with 5:14 left.

Neither team moved the ball on the next two series as the clock continued to run down and the Bobcats got the ball at their own 18 with 1:17 to go and one timeout with the game on the line.

Argraves’ game plan to move the ball down field was simple: Throw it up to the outside to the team’s two tallest receivers, either Kallman or the 6-2-inch Jimmy Diaz.

Cherry connected with Diaz down the sideline to get the ball into midfield, then hit Kallman to get the 26.

As the clock ticked under 35 seconds, Cherry picked the double-covered Kallman and it wound up in the hands of Martinez. A stunned, silent crowd at Cienega watched in disbelief as the Lancers walked off the field with a victory to move to 2-0.

“We needed to be battle tested like that,” Rogers said. “That’s a great football team we played. But we got a lot of stuff to work on.”

For Cienega, the loss drops it to 1-2 on the year. The team has a bye week before their Oct. 1 home game against Campo Verde.

Amphi’s big and bruising offensive linemen are treated like royalty on the northwest side of Tucson.

The reigning Pac-12 champs open their fall season this weekend at the Maui Jim Invitational in Scottsdale. 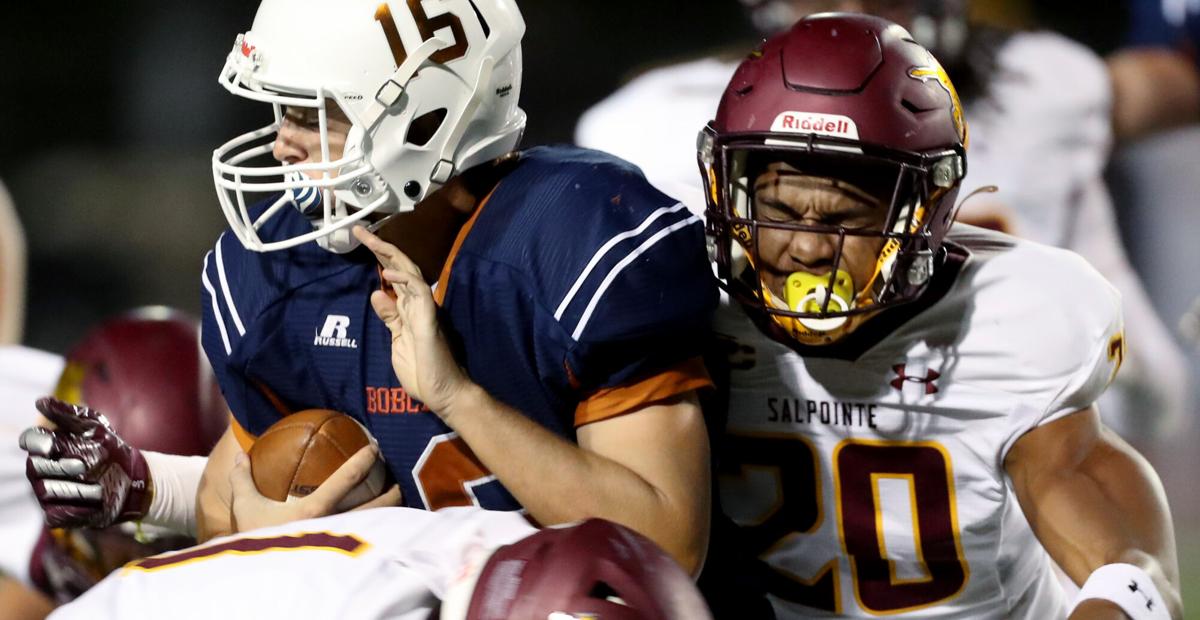 Salpointe's Cruz Rushing (20) comes in from behind to sack Cienega's Brayden Cherry (16) in the second quarter of their game at Cienega High School, Tucson, Ariz., September 16, 2021. 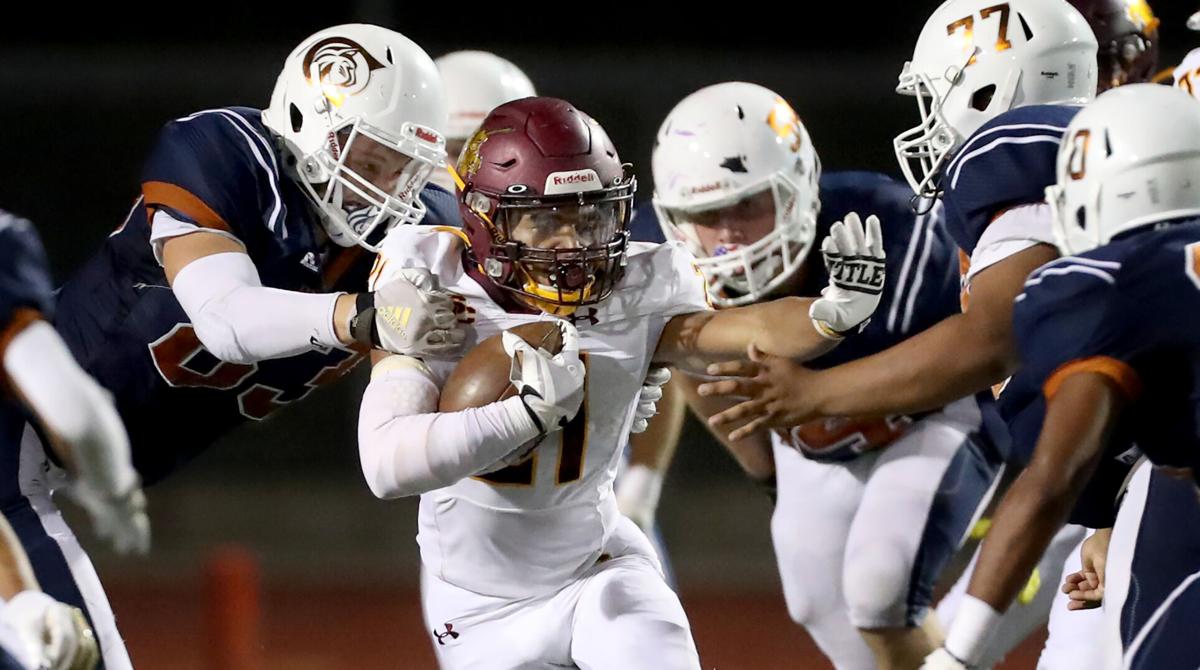 Salpointe's Anthony Wilhite (21) fights his way up the middle through the heart of the Cienega defense in the first quarter of their game at Cienega High School, Tucson, Ariz., September 16, 2021. 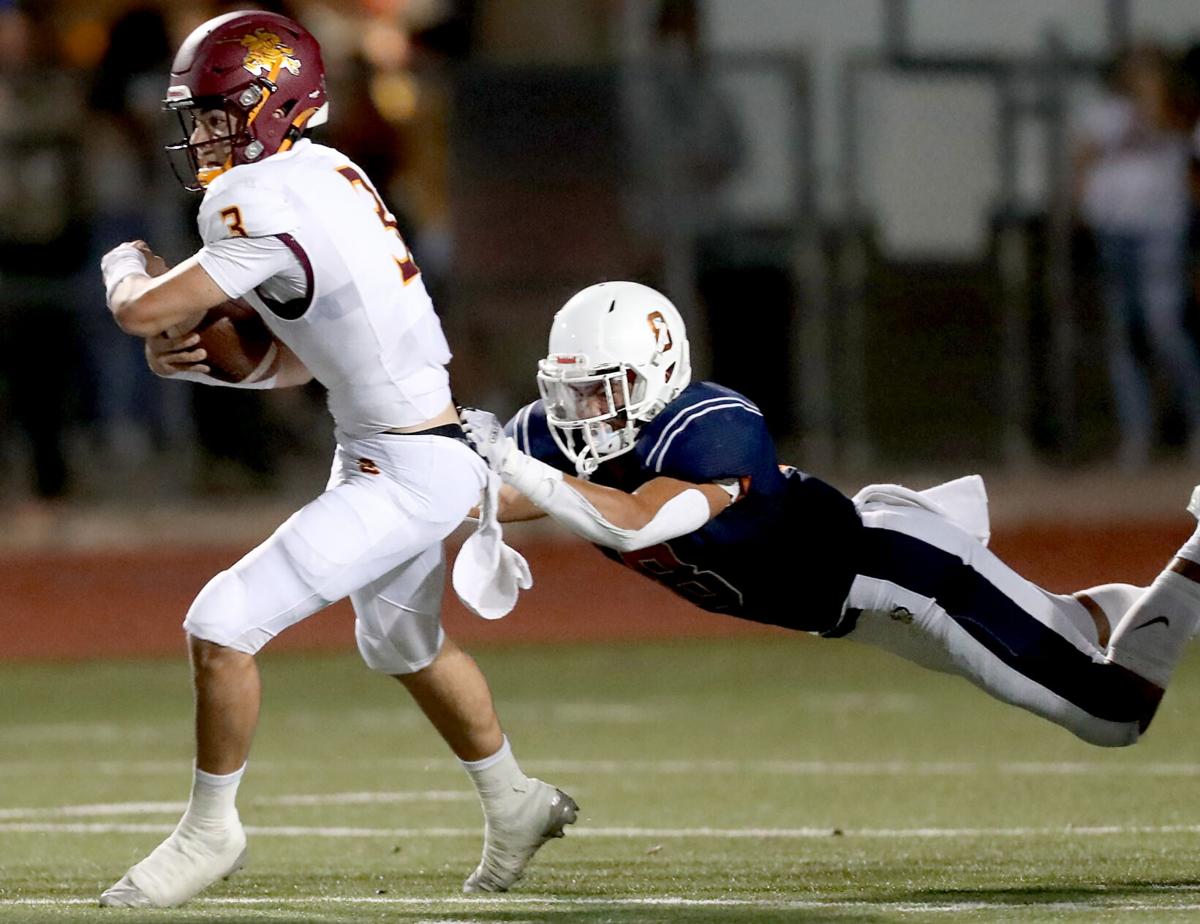 Salpointe's Treyson Bourguet (3) runs out of the reach of Cienega's Spiezio Gonzalez (8) to avoid a sack at Cienega High School, Tucson, Ariz., September 16, 2021.