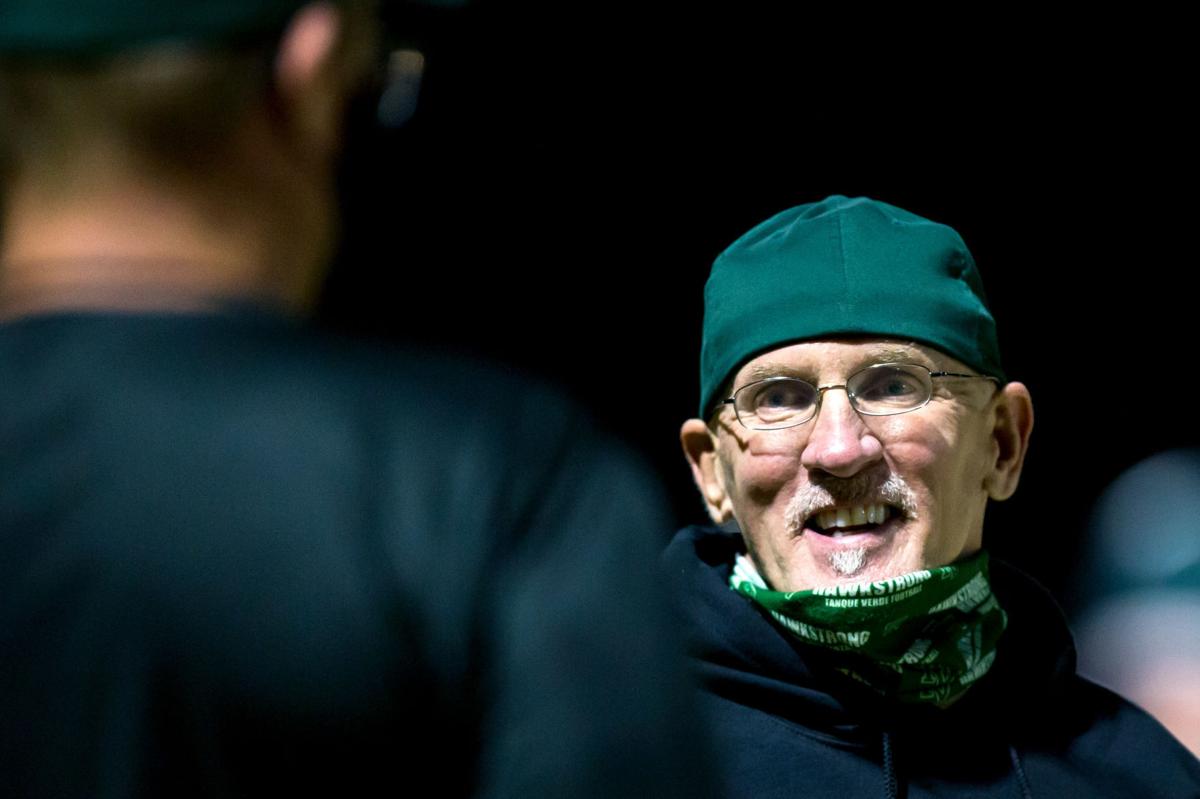 Tanque Verde coach Jay Dobyns talks to another coach on the sidelines during his team’s 49-10 win over Rincon/University on Nov. 6. 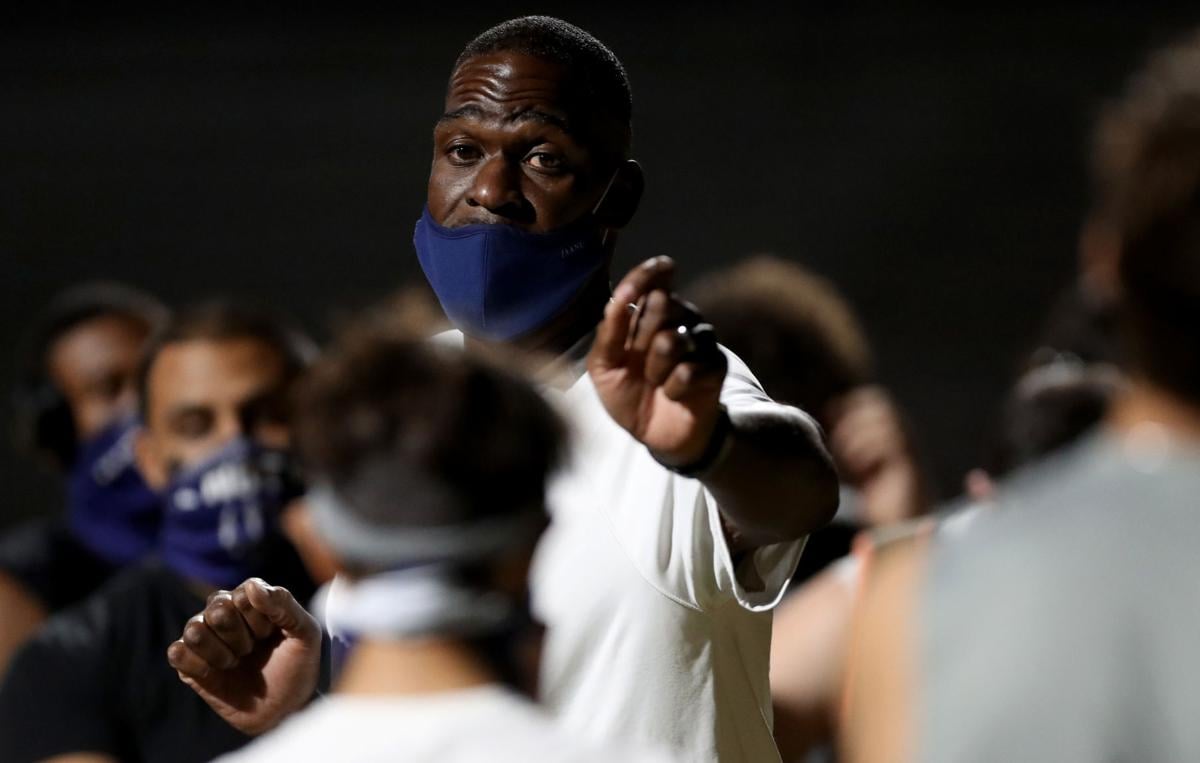 Ironwood Ridge coach James Hardy talks to his players shortly after their Nov. 6 game against Buena was canceled just before kickoff. The Nighthawks went on to play Cienega the next day.

After summer and fall marked by COVID-19 infection rates, delayed deadlines and uncertainties, Southern Arizona’s high school football players were relieved in the weeks leading up to Thanksgiving that they were even playing.

But on Nov. 24, everything changed. TUSD and other school districts canceled their seasons, one day after Pima County sent out a memo recommending that schools stop playing sports because of the spread of COVID-19.

Being private, Salpointe Catholic and Pusch Ridge Christian were able to continue on with their seasons. Coaches of the remaining 25 Southern Arizona teams were left helpless. Some coaches were unable to address their players face-to-face for a final time.

“I don’t think everyone truly realizes that high school football is the absolute end for the athletes in this sport. There is no club option and most don’t get to play in college,” said Canyon del Oro coach Dustin Peace. “For it to be ripped away like that was tough — and could have been prevented, in my opinion.”

The Star reached out to all 25 coaches whose seasons were cut short with questions about what they experienced this season. We’ll be running their answers over the next five days. Their responses have been lightly edited to reflect Star style.

Here’s what the coaches who responded had to say:

What was the highlight of your short season?

Cory Noble, Walden Grove: “The biggest positive was that our players had an opportunity to play and the commitment they made to play the game they love, taking advantage of each opportunity. The single biggest high point was probably our last-second win vs. Sahuaro and seeing the boys work together for a great win!”

Dustin Peace, Canyon del Oro: “The highlight of our season was keeping everyone safe and getting close to our potential on the field. We were luckily COVID-free for our nine-week duration, which our families should get a lot of credit for the sacrifice they all endured. Second, we played some tough teams this year and in Week 3 vs. IRHS, we showed how well we can play as a team and that is awesome to know that even with a short season we were able to show how great our team really was under the lights.”

Ryan McBrayer, Sabino: “I think everyone that was on the sideline for our Sahuaro game will remember our last two drives forever. From watching Sahuaro to go up 10 points with 50 seconds, to a big return by David Cordova to set us up at the 50, to AJ Skaggs throwing the perfect pass to Derek Sanchez for a one-play TD, to Steven Bishopp kicking a great onside kick and Gabe Garcia recovering it, to AJ hitting Derek again for the go-ahead score. Best ending I’ve been a part of so far.”

Jake Allen, Pueblo: “From Day 1, our Pueblo players, faculty and community welcomed me with open arms and treated me like family, which is something I will always remember and be incredibly thankful for.”

Jorge Mendivil, Amphi: “Watching the team come together in the second half of our second game vs. Sahuarita. We were able to pick them up on short notice, and playing a triple-option team is tough. We made adjustments at halftime after only being up 14-12. Our kids responded with a 41-19 win and a dominant second-half performance. That is when they all realized that they had a special group. We went on to go 4-0, posting two shutouts.”

Pat Nugent, Cienega: “Without question the biggest highlight was just the ability to play that first game. With everything that these kids went through and for them to get tested. That first game was so exciting for the main fact that we were playing.”

Jay Dobyns, Tanque Verde: “Our first game. Our program had not won a game in 778 days. The joy on our players’ faces after winning made a year of COVID heartache all worthwhile.”

Mike Wells, Palo Verde: “The highlight of our season was being with the students. The best and most important part of that this year was seeing their mental health improve from Day 1.”

Louie Ramirez, Marana: “I believe having the opportunity to step on the field with our team was a highlight in itself even though we were only able to get three games in before the Pima County Health Department shut us down. We were fighting an uphill battle the entire time merely trying to get our boys on the practice field until we finally got the green light to compete.”

Scott Cortese, Flowing Wells: “I was amazed by the focus and commitment of the players. We practiced a long time not knowing what was going to happen with the season, and they stuck with it. We only played three games, but they made the most of those games.”

Matt Johnson, Mountain View: “Just getting to see the ball in the air was a big highlight. Many kids quit because they didn’t think we would play any games.”

Justin Argraves, Tucson High: “Just being able to be out on the field with the kids and have a few hours of normalcy. Seeing smiles on the kids’ faces while doing what they loved was a constant reminder to not take the small things for granted.”()

James Hardy, Ironwood Ridge: “Having the opportunity to play Cienega Saturday afternoon after our game was canceled right before warmups against Buena the night before.”

Glenn Posey, Sunnyside: “The best part was everyone’s resiliency, our kids were great, hardworking, adaptable, and we got better as a football program!”

'The right thing to do': Organizers cancel soccer Shootout because of coronavirus

Organizers announced the tournament in October, citing multiple coronavirus-related safety precautions. On Wednesday, organizers said the decision to cancel "was just the right thing to do."

Mayor, chief seek to reel in city board often at odds with Tucson cops' discipline

Tucson Mayor Regina Romero will ask for a review of the city charter to examine the role of civilian groups like the Civil Service Commission that oversees discipline and terminations in the city.

Dr. Luis León, a surgeon with Pima Heart and Vascular, ran his first ultra or endurance race in 2014. He's run three since, with hopes of completing his fifth one in May.

Coyotes President Xavier Gutierrez: Diverse voices a must for NHL to grow

Gutierrez recently spoke to a virtual audience as part of a special series by the Arizona Town Hall in an effort to reach possible new fans.

From Adia Barnes to Alyssa Brown, here's a look at 20 (or so) of Southern Arizona's top sports figures of a pandemic-ravaged 2020

One of the most revered coaches on Arizona's staff has left the Wildcats.

The Star reached out to all 25 coaches whose seasons were cut short with questions about what they experienced this season. We'll be running their remaining answers over the next two days.

The Star reached out to all 25 coaches whose seasons were cut short with questions about what they experienced this season. This is the final question in our series of five.

Tanque Verde coach Jay Dobyns talks to another coach on the sidelines during his team’s 49-10 win over Rincon/University on Nov. 6.

Ironwood Ridge coach James Hardy talks to his players shortly after their Nov. 6 game against Buena was canceled just before kickoff. The Nighthawks went on to play Cienega the next day.