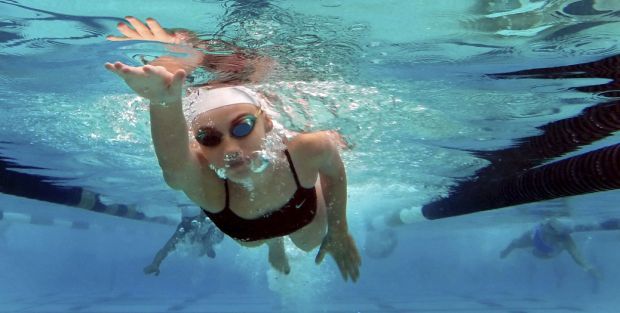 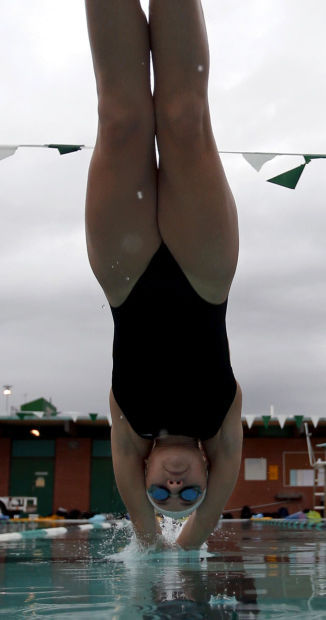 Mattingly pierces the water’s surface at practice. The sophomore is among a group of Lancers who are determined to claim this year’s state title. Salpointe came in third last season.

For most schools, a third-place finish at the state championship is considered a success, or at least a building block for the future.

That is, unless you’re Salpointe Catholic.

There’s reason to believe 2014 will be Salpointe’s year to bounce back. The Lancers have put together numerous impressive meets, including a dual win over Foothills. Sixteen of their swimmers have already qualified for the state meet. Salpointe will compete at the Marana Tiger Last Chance Invitational on Saturday. Here are three reasons why 2014 could be the Lancers’ year:

Teagan McGinnis made waves as a freshman last season when she finished third at state in the 100-yard freestyle and fifth in the 200 freestyle. She also help Salpointe to second- and fifth-place finishes in the 400 free relay and 200 medley relay, respectively.

Though she’s young, Salpointe coaches see the sophomore as a team leader. They say McGinnis works just as hard as her teammates — if not harder — and has also proved her dedication through another metric, posting the team’s fastest average times in practice.

“She gives positive leadership in a real subtle way,” said assistant coach Carly Croman, a member of Salpointe’s state title team two years ago. “She carries herself like a champion, but is constantly working to get better.”

Many Lancers use the word “determined” to describe this year’s team. The determination grew after Salpointe beat Foothills early in the season, McGinnis said. And the importance of staying driven is being pushed by coach Chad Castillo, who sets the tone at daily practices.

“It started from the moment we entered the pool for our first practice this season,” McGinnis said. “The coaches have really pushed us to understand that winning state is the goal and to make sure we treat every practice as if a championship is at risk, because we want to do better than we did last year.”

The Lancers understand that Foothills is their most dangerous opponent, and they know what it will take to win state.

With a victory over the defending champions under its belt, Salpointe also has an idea of what it is going up against when the two meet again at the state-championship meet next month.

“We’ve seen what they have, and we know who their best swimmers are,” Mattingly said. “We’re ready to go.”

Have a tablet? Download our free weekly Wildcat sports magazine

Go to Tucson.com/Insider on your tablet to download our Sports Insider magazine.

Mattingly pierces the water’s surface at practice. The sophomore is among a group of Lancers who are determined to claim this year’s state title. Salpointe came in third last season.