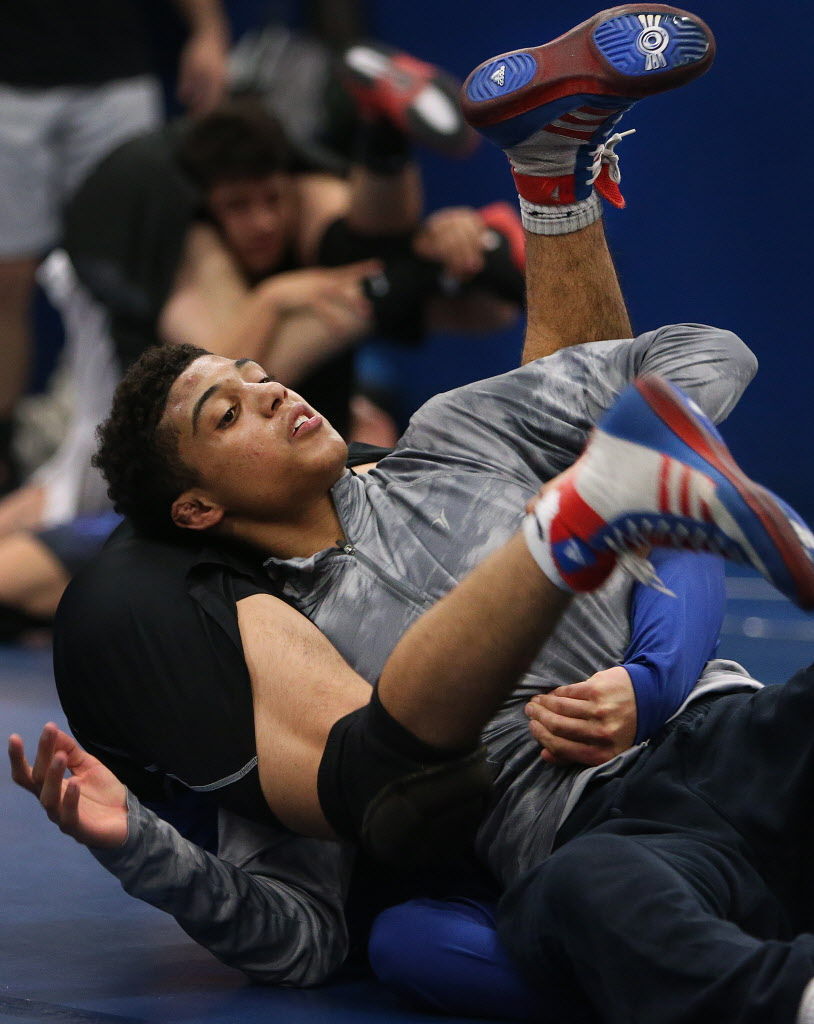 Roman Bravo-Young has won all 64 of his high school matches and took the state title at 120 pounds last season. 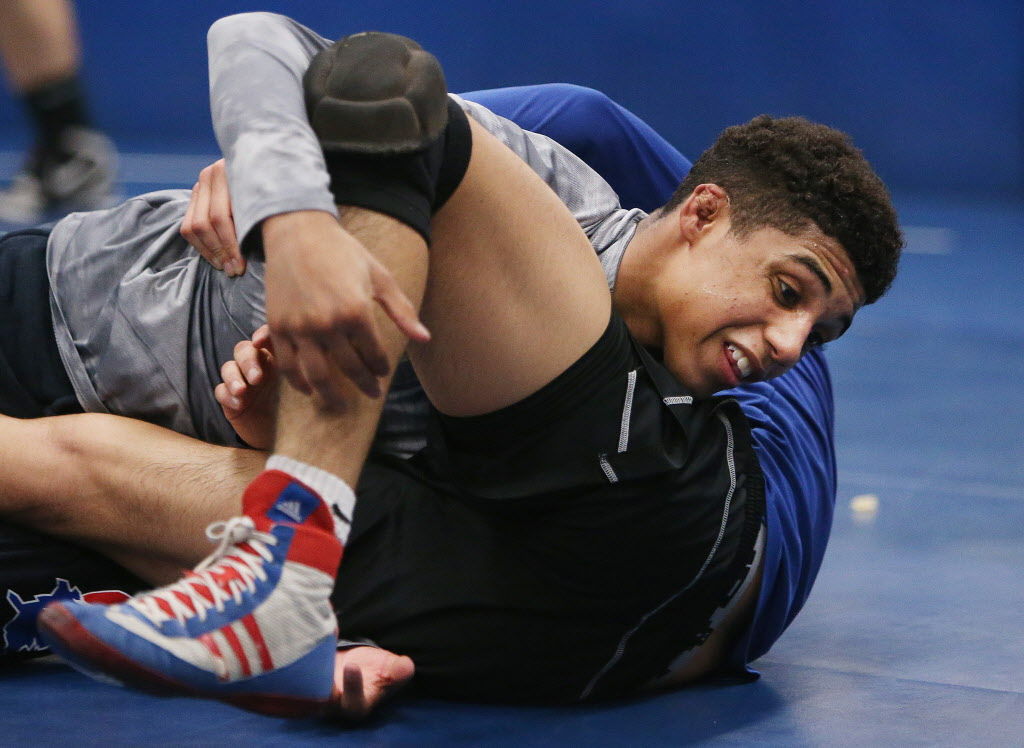 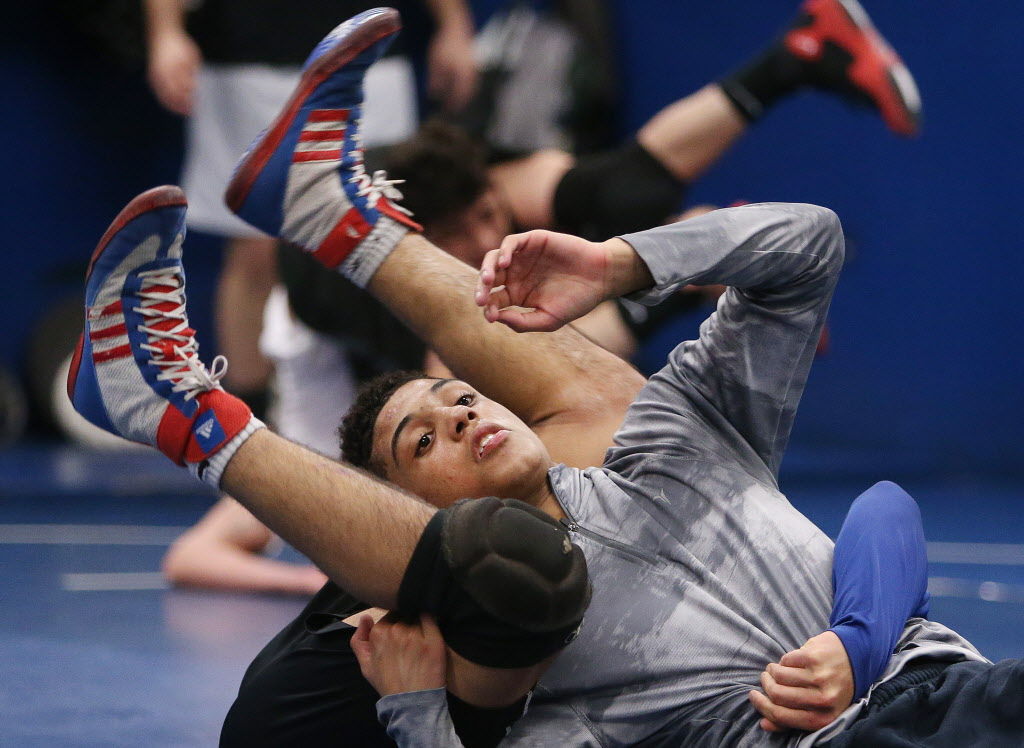 The 120-pound defending state champion finished the same way each of his 64 high school bouts ended — with a win. Bravo-Young stood just a level above his competition, alone on the first place podium, staring out at his smiling teammates, an ecstatic coach in Anthony Leon and, finally, his proud assistant coach and grandfather, Mike Bravo.

That’s a scene that will likely occur once again in Saturday’s Flowing Wells Invitational finals. The two-day event, celebrating its 50th anniversary, features 40 teams from Arizona, New Mexico and Texas.

“It never gets old,” said Bravo-Young, a sophomore. “For me, it feels like some relief sometimes.

“To me, it was just another match. Sometimes, I go into these matches and I have everything to lose, my opponents have nothing to lose. Win by one or win by 100 – as long as I’m still undefeated at the end of the day.”

On the outside, it seems Bravo-Young has everything going for him. He’s one of the top names in the sport nationally, he’s undefeated and is the heartbeat of a perennial power in Sunnyside. And with that, comes the responsibility of defending his name and record and stepping up to answer the call when its his turn.

“Here’s the thing: He’s the king of the mountain and everyone wants the mountain to fall and the king to fall off it,” Leon said. “And it’s just not going to happen.”

Bravo-Young won the 106-pound Division I state championship as a freshman but has loftier goals and expectations that center around national teams. For now, however, he’s focused on bringing a Division I state title to Sunnyside. The Blue Devils were the state runner-up last season but had to vacate the second-place trophy for using an ineligible wrestler.

Under the tutelage of Leon, Bravo-Young has learned how to perfect the high school grind, how to take care of his body, how to peak in his training at the right time and how to be a leader.

“I describe it kind of like, you got a brand new car, you got a sports car and you drive it off the lot,” Leon said. “You got to make sure it’s being taken care of as far as its oil changes and tune-ups, he’s incredible.”

Bravo-Young and the Blue Devils hope to use this weekend’s event as a dry-run for sectionals, and Leon likes the way his squad has been building toward a big finish.

“These kids want to win a team championship,” Leon said. “It’s not about Peoria or Flowing Wells, it’s about the Division I state championship. I’m proud of the guys, they do the right things and we’re headed in the right direction.”

Bravo-Young echoed Leon’s confidence as he spoke about bringing a team title back to the south side.

“The main things is, we know have the guys, we just have to win the close matches,” Bravo-Young said.

“Sunnyside is known as one of the best, and we fell off the last couple of years. We need to get back to bringing titles here. I’ll feel accomplished.”

Amphitheater's wrestling team returns five of six state placers from a year ago. The 2015 Division III stater runners-up are rounding into sha…

Roman Bravo-Young has won all 64 of his high school matches and took the state title at 120 pounds last season.