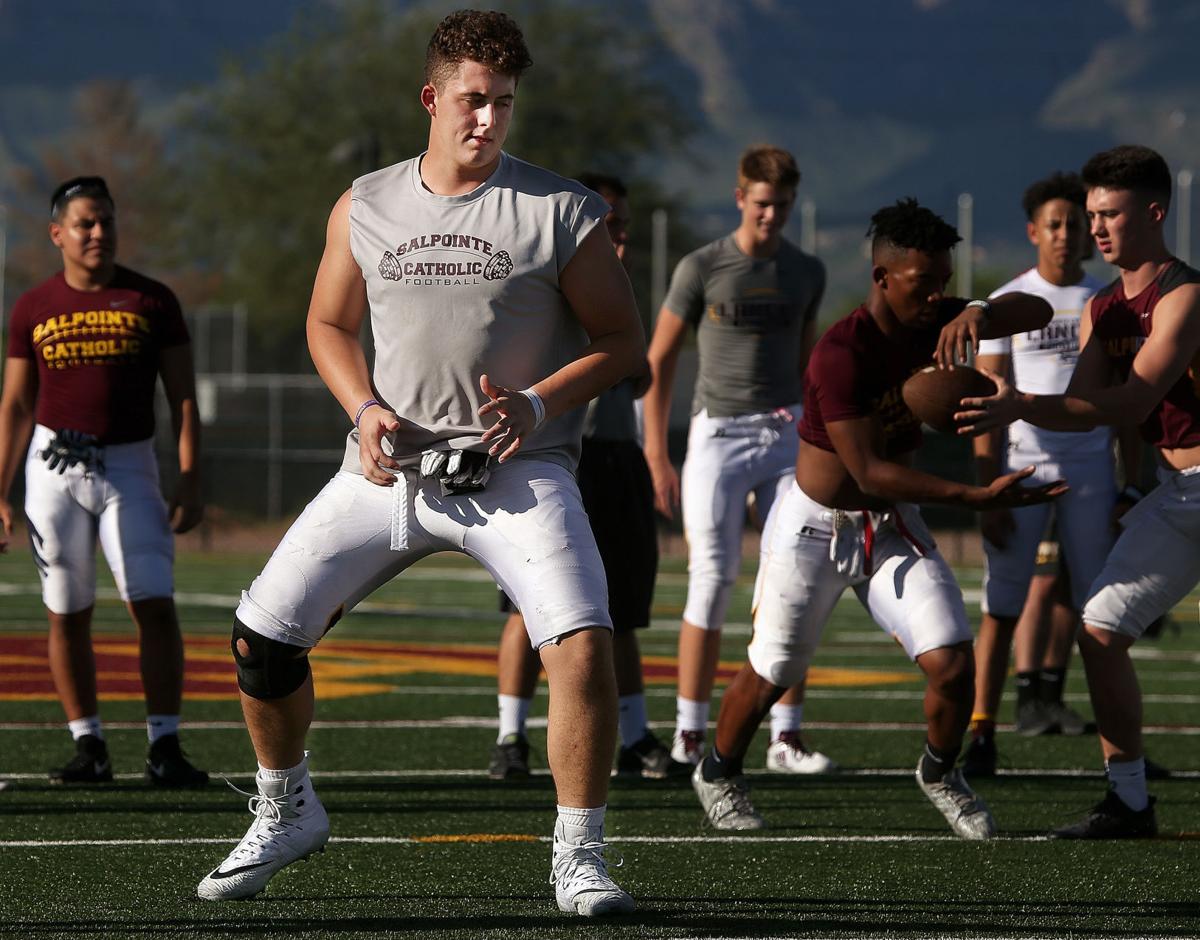 Matteo Mele was moved from tight end to the offensive line and got the attention of several Division I college recruiters. He is currently a redshirt freshman at Washington. 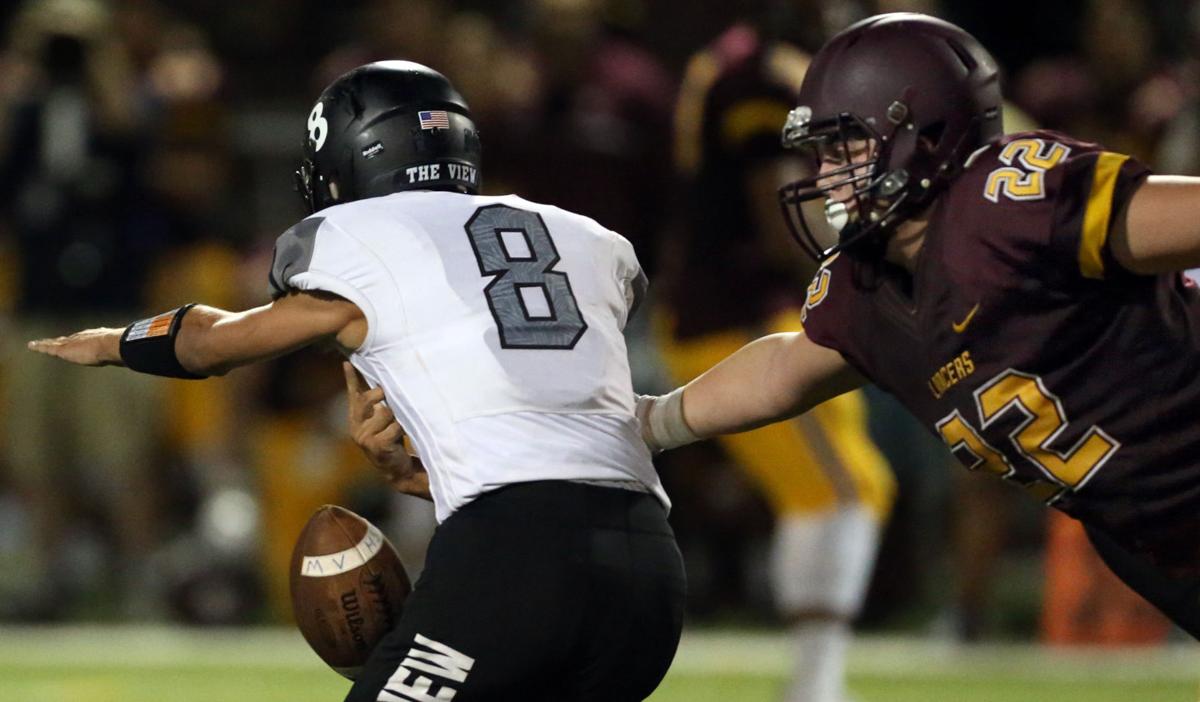 Salpointe’s Matteo Mele strips the ball in a game against Mountain View last season. The senior is the only Arizonan named a preseason All-American by MaxPreps.

Salpointe Catholic will open its high school football season Friday night. And, if things go right, the Lancers’ schedule will end with a state championship game sometime around Thanksgiving.

Running backs Bijan Robinson and Mario Padilla headline what Salpointe coach Dennis Bene calls “the best skill guys we’ve had in a while.”

Defenses are sure to stack the box to stop the Lancers’ vaunted rushing attack, meaning the offensive line play will be key to the Lancers’ success.

“I’m really excited,” Mele said this week. “I can’t wait to get out there and hit someone.”

This time last year, Mele was playing tight end. A lot has changed since then — Mele moved to the offensive line, grew to 6 feet 6 inches and 275 pounds, added 14 scholarship offers and a four-star rating from all the major online recruiting services. In June, the re-made Mele committed to play at Washington.

“It was a great feeling,” Mele said. “It’s always been in the back of my head that I wanted to play football at the next level. I always had the size and I’ve always been pretty athletic and I thought maybe if I work hard it’ll come true.”

Bene saw enough in Mele to move him to the line. It was, frankly, an easy sell.

Bene sent Mele’s highlights to Louisville and Kansas State, offers soon followed. Washington State was the first program to offer. It wasn’t long before Washington, Oregon and Oklahoma were all involved.

At first, Mele had visions of playing at Arizona. Mele’s grandfather is Bill Lueck, a former all-conference offensive lineman with the Wildcats and a first-round pick of the powerhouse Green Bay Packers in 1968.

Arizona was one of Mele’s earliest offers, but didn’t stay near the top of the list for long. Once Mele’s name started rising in the recruiting rankings — Scout.com rates him the No. 3 recruit in Arizona and the No. 23 offensive tackle in the country — and blue blood programs expressed their interest, the lineman realized he was ready to go somewhere else.

“I’d always had mixed feelings because I thought before I started getting offers, ‘How cool would it be to play for my home school, the University of Arizona?’ My grandpa went there so I’d carry on the tradition. Both my parents (went there),” Mele said. “Then these big offers started coming in. One thing my grandpa told me is, ‘You have to get out of your comfort zone.’ So towards the end it got into my head that I want to leave the state.”

Among the power programs, Washington did the most work to land Mele. Offensive line coach Scott Huff visited a Salpointe practice to evaluate the tackle, then offered a scholarship a week later. Mele committed to Washington just a few days after his first visit to the UW campus.

“They were one of the schools that actually sent a coach,” Mele said. “A lot of schools sent coaches after they’d offered me but they came and evaluated me before they pulled the trigger. Instead of seeing what other schools have done they actually thought I was a good fit … and it’s just the education you can get there, the area, I’ve always liked the Pacific Northwest, Seattle is awesome and I went for my visit and I loved it.”

Mele has been named a preseason All-American by MaxPreps, the only player in Arizona to receive the honor.

“That’ll be interesting to see” how he handles that, Bene said. “He’s going to be a matchup problem for some teams because he’s so big and he’s so long and he’s so athletic — (he’s) 275, 6-6 and he can move his feet. But with that said, if he goes up against a kid who’s not very athletic, that kid’s in trouble.”

High school football talent Tucson this season is as impressive as its been in a few years. Here's a look at some of the top prospects in town, and where they stand in terms of college recruitment.

Listed by year and in order of recruiting rankings, according to Scout.com.

(* means the player is already committed to that school.

Who are the Arizona Wildcats targeting on offense in the 2018 recruiting class?

An in-depth look at Arizona's recruiting targets for 2018.

Who are the Arizona Wildcats targeting on the offensive/defensive lines in the 2018 recruiting class?

Who are the Arizona Wildcats targeting on defense in the 2018 recruiting class?

At this point last season, Arizona had filled most of its recruiting class already. Well, at least verbally filled it. At this point, it'd be …

Akot sits in the second half and Kory Jones leaves with an injury during a 25-point win.

Mountain View's Kai Golden is the best player in Tucson nobody is talking about. Here's why

Mountain View’s Kai Golden is a disruptive force on the interior, and should be considered in the same breath as Tucson’s elite prospects.

Matteo Mele was moved from tight end to the offensive line and got the attention of several Division I college recruiters. He is currently a redshirt freshman at Washington.

Salpointe’s Matteo Mele strips the ball in a game against Mountain View last season. The senior is the only Arizonan named a preseason All-American by MaxPreps.