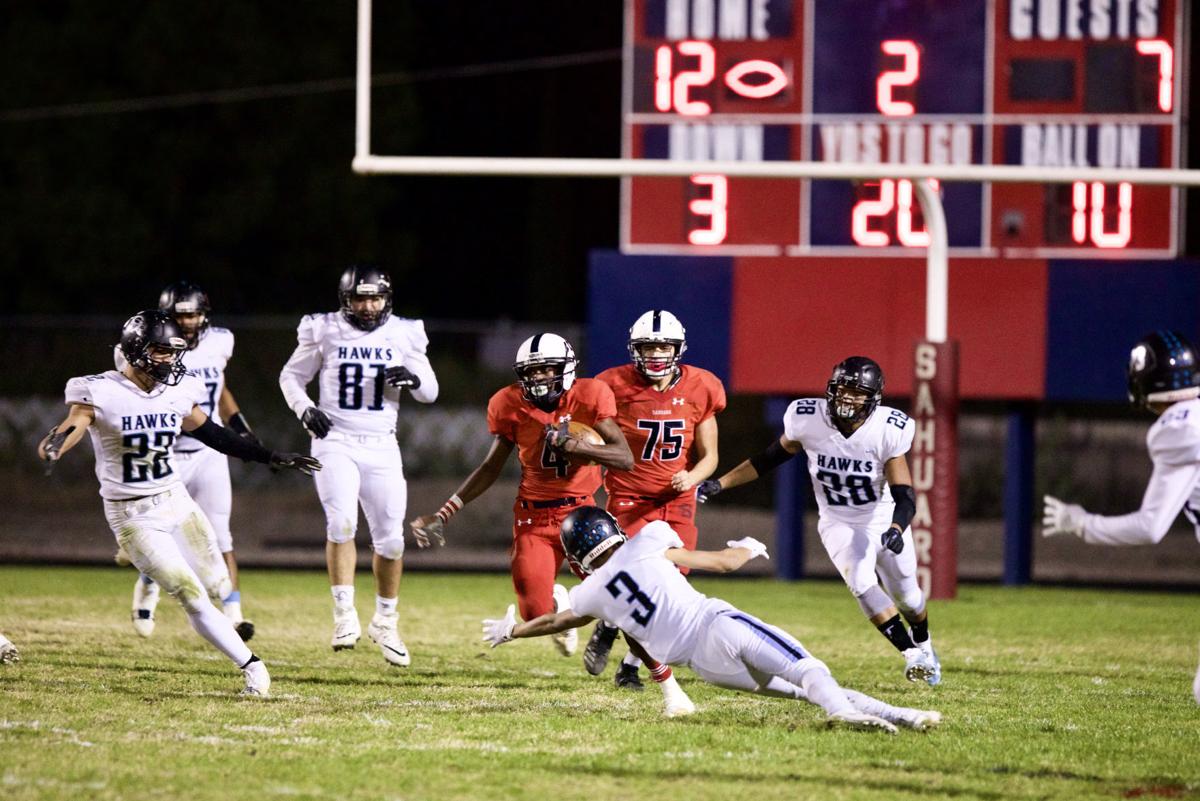 Sahuaro Jamir Gasaway, 4, runs a 90-yard run during the first half of the No. 1 Sahuaro Cougars verse the No. 9 Gila Ridge Hawks high school football game at Sahuaro High School on November 15th, 2019. 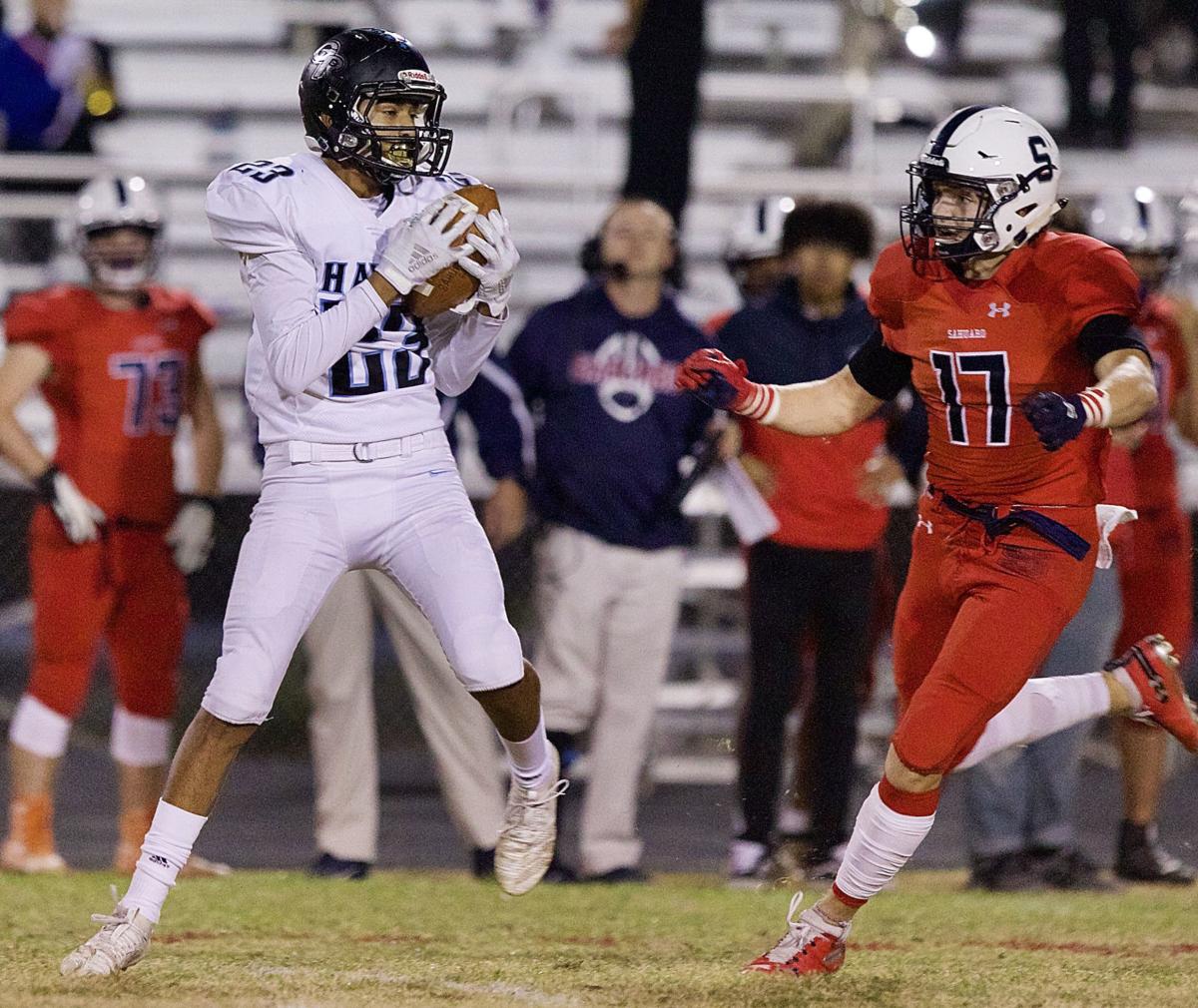 Gila Ridge Anthony Mejia-Acosta, 23, intercepts a pass intended for Sahuaro Calen McFarland, 17, during the first half of the No. 1 Sahuaro Cougars verse the No. 9 Gila Ridge Hawks high school football game at Sahuaro High School on November 15th, 2019.

Sahuaro junior running back Jamir Gasaway took a sweep to the left side 90 yards for a touchdown with 7:23 to go in the second quarter. The touchdown was already his third on an evening where the Cougars’ offense was cruising, giving them an 18-7 lead.

The Cougars added a field goal before halftime to take a 21-7 lead in the Class 4A state quarterfinal game.

But hose would be the final points of the season for the No. 1 seed, as visiting No. 9-seed Yuma Gila Ridge (11-1) would score 21 unanswered points in the second half to leave Tucson with a victory, crushing the hopes of a Sahuaro team that was looking for a second straight trip to the 4A semifinals.

“We didn’t execute offensively,” Sahuaro coach Scott McKee said. “We had to get first downs and keep on the field. They’ve got a really, really good front seven and credit goes to them on that side.”

Gasaway scored on runs of 8, 46 and 90 in the first half, but was banged up after halftime and was never the same, finishing with just five carries for 17 yards in the second half.

“His ankle got banged up a little bit the second half, but there’s no excuses,” McKee said. “They did a good job of game planning and making some defensive adjustments.”

The turning point came early in the fourth quarter, as Gila Ridge QB Cassell Wiggins made a one-handed grab on a trick play that set the Hawks up inside the Sahuaro 5. Running back Renan Duarte then scored to tie things up at 21.

A crazy sequence then saw Sahuaro QB Devyn Roberts complete a 51-yard pass to Ahmad Hunter on 3rd-and-22 to set Sahuaro up at midfield, before fumbling the ball two plays later. Gila Ridge struck quick, with Wiggins completing a 67-yard touchdown to give the Hawks the lead for good.

The Cougar offense was forced to punt, but the defense held and got the offense the ball back with 1:33 remaining. But Roberts threw an interception on third down to seal the game for the Hawks.

“We knew that they were a good second-half team and tried to prepare for that, but we got beat tonight,” Sahuaro senior running back Izaiah Davis said.

Sahuaro threw three interceptions and lost a fumble on the evening, having to throw the ball more this game after not completing a pass last week in their victory over Glendale.

A Cougar rushing attack that finished with 471 yards last week was held to just 168 against Gila Ridge, with Gasaway accounting for 139 yards on 10 carries.

“It’s not what you want,” McKee said. “I want to take these guys and allow them to have the ultimate success of being in the final four and a chance to win it, but there’s a lot of teams that feel that way today, too.”

Sahuaro finishes the season 9-3, with McKee giving high praise to a senior class that stepped up after losing so many players to graduation last year.

“After losing 28 guys from last season, I’m really proud of my players and coaches,” he said. “It wasn’t the way we wanted it to be or how we wanted to finish it, but I have a lot of pride in what those guys did.”

Sahuaro Jamir Gasaway, 4, runs a 90-yard run during the first half of the No. 1 Sahuaro Cougars verse the No. 9 Gila Ridge Hawks high school football game at Sahuaro High School on November 15th, 2019.

Gila Ridge Anthony Mejia-Acosta, 23, intercepts a pass intended for Sahuaro Calen McFarland, 17, during the first half of the No. 1 Sahuaro Cougars verse the No. 9 Gila Ridge Hawks high school football game at Sahuaro High School on November 15th, 2019.