A Tucsonan planned and held Southern Arizona's first in-person race during a pandemic. Here's how.
Share this
By Tom Tronsdal Special to the Arizona Daily Star

Runners sprinted down Kinney Road as they prepared to start their final kick to the finish line. Just as they turned into the Old Tucson parking lot, they were greeted by a 6-foot rooster and the race director reminding each runner to put on their mask before running to the finish. One by one, every runner pulled out the mask they had been carrying, covered their faces and kept pushing through the final 200 yards toward the finish line of the 5-mile race.

As they crossed, runners raised their arms high in the air to celebrate the completion of a tough course. Cheers from other racers rang across the parking lot. It wasn’t until the runners made it to their cars that anyone would be able to see the huge smiles that had been hidden behind their masks.

The Aug. 23 Run with the Roosters Kinney Road 5-Miler road race was the first local run held since the coronavirus pandemic forced sports throughout the country to be canceled.

For the 149 runners who competed, it was the same. But very different.

As sports began to shut down this spring, running groups around the nation looked for a way to continue their live events. Initially, some races planned for 2020 were canceled. Others were moved to virtual-only, a way to keep crowds from gathering. The TMC Meet Me Downtown 5K in early June was one of those races; 522 runners paid to be a part of the virtual version, down from the 1,735 who ran in person last year.

Johanna Goode of RunSignUp, the nation’s leading race timer software, said communities are adapting with most large sporting events shut down. Some, like the Meet Me Downtown 5K, simply converting existing races to virtual versions. Other races, like Run with the Roosters, have moved to a hybrid model, where competitors have the choice to either race in person or do it virtually. Others are creating socially distant running “challenges” that occur over an extended time period, such as an entire month.

Still the goal is to be in-person, said Goode.

“People prefer to run regular races with other runners,” she said. “It is all about engaging with the community and having a fun time.”

In fact, most of the calls to RunSignUp offices in New Jersey are from race directors looking for ways to safely hold in-person races. Most runners say they’re tired of running virtually.

“Every day I run virtually,” Janell Jackson of Sierra Vista said before the Run with the Roosters. “I miss the social part of running.”

Jackson ran with Linda Wright, her longtime running partner. Wright said she was so eager to run with her friend that she didn’t mind the long (and early) drive in from her home in Tombstone.

Throughout the United States, few in-person races have been held. Even rarer are races that are run at a single start time and not over the course of a day or two. Run with the Roosters was one of the first.

From the beginning, Landau knew he needed to do three things: establish strict protocols, be clear in sharing those protocols with runners and enforce those protocols on race day.

Landau began by researching the appropriate protocols from the Centers for Disease Control and Prevention and national running organizations such as Running USA. He then prepared his own list of safety practices that he could present to Pima County officials for their approval.

Maintaining proper social distance was the biggest challenge. Racing events bring crowds, whether it’s the groups of people waiting near the start, the runners who stand shoulder-to-shoulder along the starting line, those who sweat and breathe heavily during the race or the crowds that congregate afterward. Landau also considered the spectators and volunteers who help make the race happen. He decided right away that the event would be closed to fans.

To prevent crowding at the start, Landau instituted a “wave start.” Groups of 12 runners would be assigned a time slot to start. They would have to wait in their cars until three minutes before the designated time, then line up 6 feet apart.

The start taken care of, Landau turned his attention to the finish. He arranged for finishers to receive a bagged, pre-made breakfast burrito and a T-shirt on their way to the parking lots. No loitering would be allowed; the awards ceremony would be shown on Facebook Live.

Runners would be asked to keep at least 10 feet between themselves and other competitors while racing. Spitting and nose-blowing would be forbidden. The traditional water stops would also be eliminated; runners would be responsible for carrying their own water or holding on to a sealed water bottle provided by the race.

All runners would be required to wear a mask from the time they left their vehicle until they reached the starting line. Masks could be removed once the race began, but they had to be put on before entering the finish area.

With the myriad of safety protocols in place, there was one more consideration. How many runners to allow on the course? Landau capped the in-person race at 190 participants — 57% of last year’s total of 330. The virtual component would allow anyone who didn’t feel comfortable attending an in-person race to participate.

Landau submitted his request, along with the protocols, to Pima County in June. The county accepted, then offered Landau and his company multiple dates.

Landau initially aimed for Aug. 2, after Gov. Doug Ducey’s limits on public gatherings would expire. As July progressed, Landau decided to move the race to Aug. 23.

Two questions remained: Would anyone show up to Tucson’s first in-person race since the pandemic began? And would the runners follow the new rules?

The Old Tucson parking lot began to fill like it usually would for an early-morning race. Runners stretched by their cars in the predawn darkness. Instead of gravitating toward the start, runners stayed near their cars while waiting for their names to be called.

Tucson’s Adele Youmans showed up because “I really missed running with people.” Ed Berkley, her running partner, put it simply.

To help runners remember the protocols, Everyone Runs sent an email chain stressing the expectations for everyone on race day.

Several runners said the message from Landau was clear. Tucson’s Gina McRostie said he was “upfront about what to expect on the rules and what would happen if you don’t follow them.”

Many racers appeared tentative as they reached the starting line. But with each stride, their nervousness seemed to be left behind.

Twenty-seven minutes after the first wave took off, the lead runner turned the corner into the parking lot from Kinney Road. Orlando Velazquez wrapped the straps of his mask around his ears as he sprinted to claim his second straight victory. Velazquez posted a time of 27 minutes 22 seconds — 1 minute faster than last year.

It wasn’t long before more runners trickled in, grabbed their food and T-shirts and headed to the parking lot.

When the final runner crossed the finish at 7:38 a.m., Landau could finally take a deep breath.

He called the race — and the participants’ willingness to follow the protocols — “a testament to the whole community.”

“They showed that if you want something badly enough, they will follow the rules,” he said.

Landau has already received approval from the required government agencies to hold his next event, the Sept. 27 Catalina State Park Trail Race. Getting the necessary government approvals is seen by race directors as the most significant hurdle for holding live races again.

Getting the right sign-offs can be a challenge. Randy Accetta, director of Run Tucson, applied for a permit to hold the TMC Tucson 10K on Sept. 13 at Pima College. Accetta needed the approval of three separate jurisdictions: Pima County, the city of Tucson and Pima Community College. The county approved, while the city declined the permit and Pima College did not respond to the request.

Accetta, who is also the National Director of Coaching Education for the Road Runners Clubs of America, believes that the size of the races will be key. Most of Run Tucson’s events are significantly bigger than 144 runners who took part in Run with the Roosters.

“How do we determine what is the right size and still have as many participants as possible?” Accetta asked. His Oct. 23 event, TMC Get Moving Races, already has 500 registrants but can’t be held as usual because it is in the city limits. He is attempting to rework the course outside the city limits.

Size also matters for races in Tucson because most are tied to fundraising for local nonprofits. Run Tucson’s Meet Me Downtown 5K in May annually raises about $20,000 for charities and provides great exposure as well for those groups. This year’s race, which was held virtually, raised $8,000.

When races return, they could look vastly different. The courses could, too. “Loop” courses will likely be incorporated to keep people further separated. When possible, courses might also be moved to a trail away from major thoroughfares. The trail option is one possibility, among many, for Run Tucson’s October race.

Whatever races do look like in the future, the runners at Run with the Roosters were happy to have the choice to be out there with others.

“I just love to run,” Wesley Cohen said. “It feels good to be here.”

At the end of the day, finisher Janell Jackson was simply happy to race again because “it offered a little bit of hope.”

Guest opinion: Every day is National Baseball Card Day for a father and son who bond over boxes

Baseball cards, while always present in Tom and Mac Tronsdal's home, have taken on a new significance during the coronavirus pandemic.

Through the kindness of friends — and the power of Ebay — cards have been steadily filling their house since the COVID-19 shutdown began.

Friday nights were our night.

Arizona wins 5-2 in Phoenix for just its third victory in 21 games. 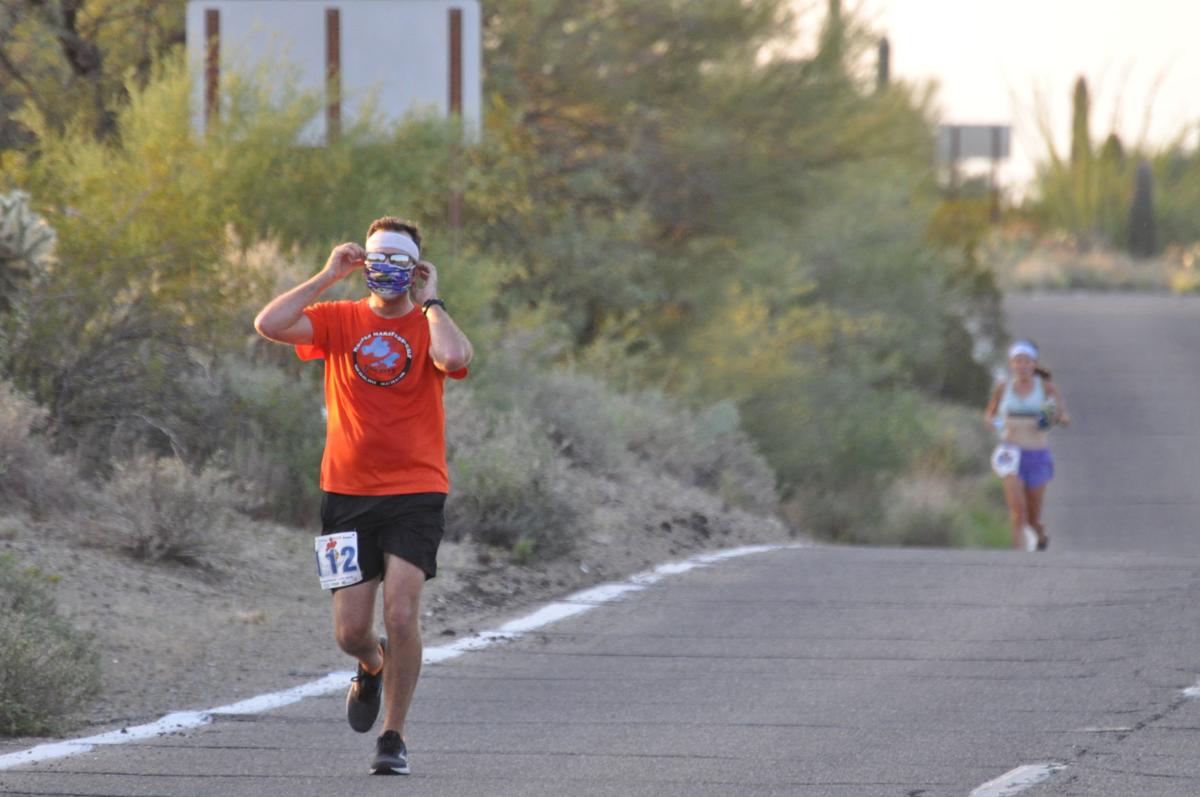 A runner puts on his mask as he nears the finish of the Aug. 23 Run with the Roosters Kinney Road 5-Miler. The first outdoor race since the start of the coronavirus pandemic attracted 149 socially-distant runners. 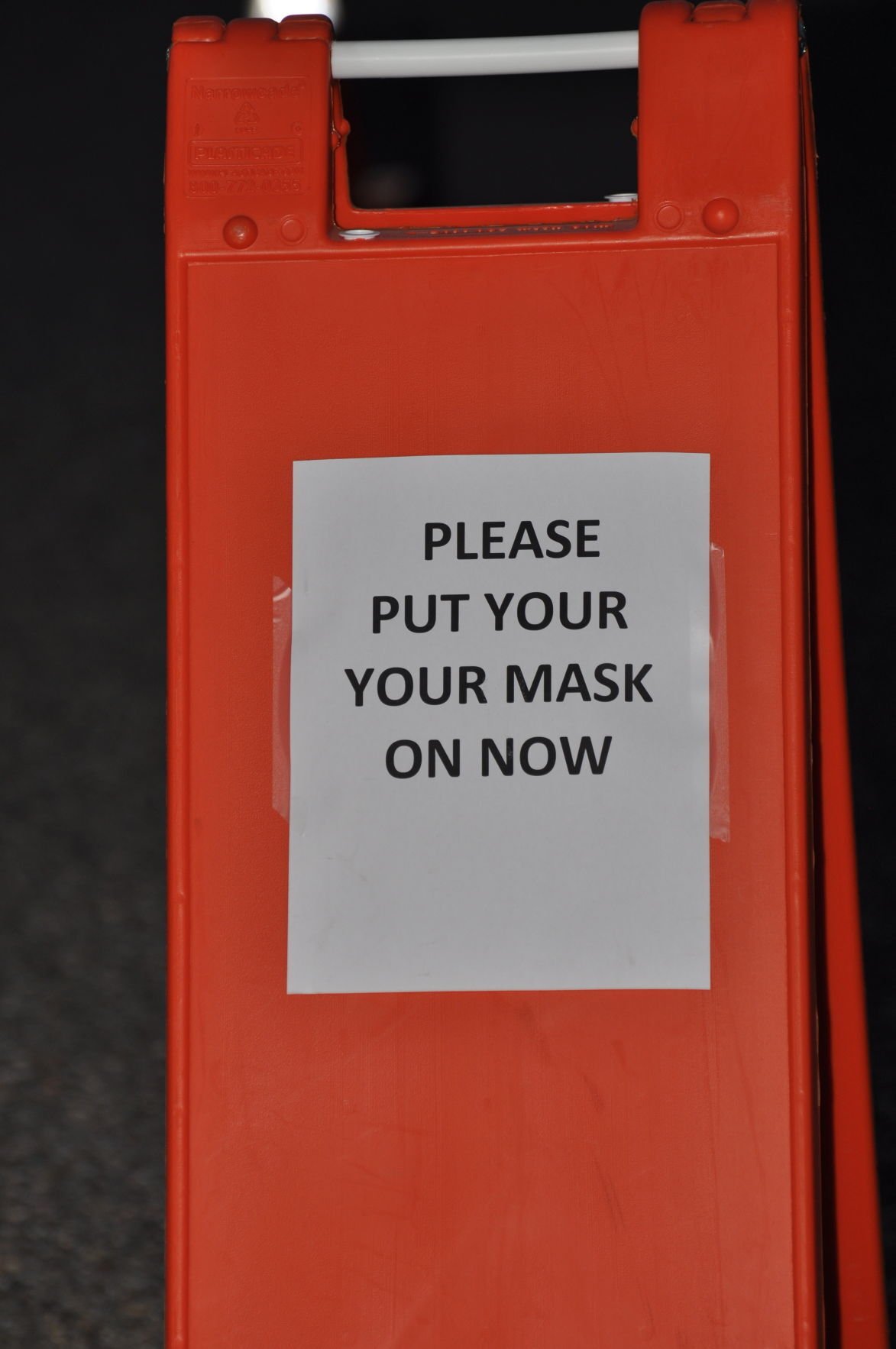 A sign reminds competitors in the Aug. 23 Run with the Roosters Kinney Road 5-Miler to put on their masks. 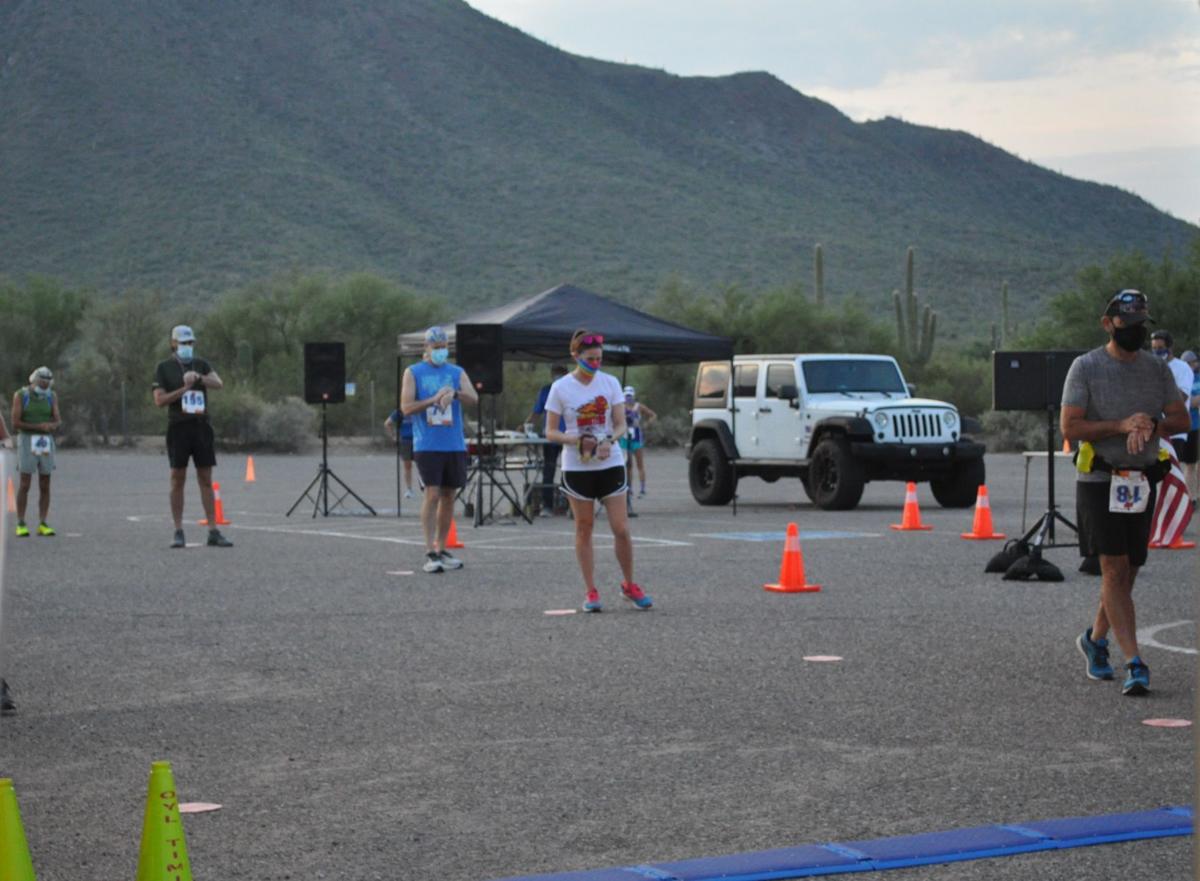 Runners line up to start the Aug. 23 Run with the Roosters Kinney Road 5-Miler.