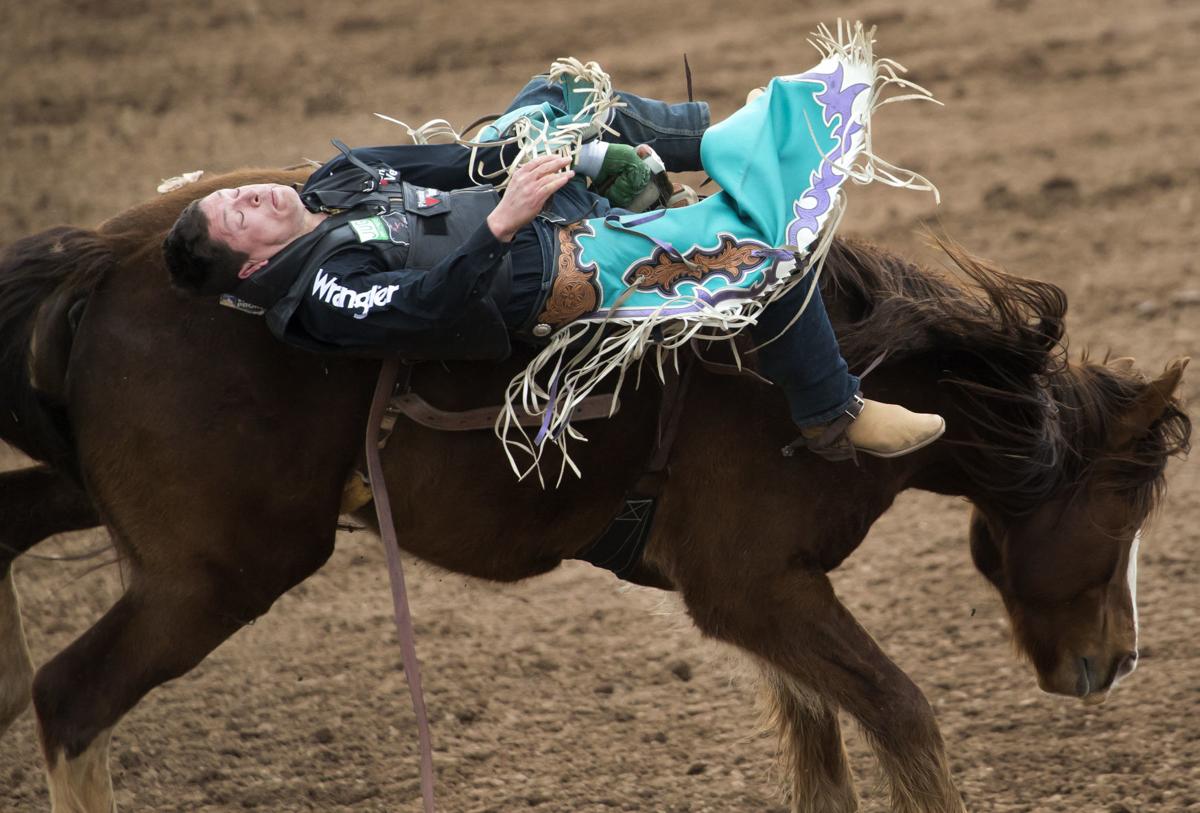 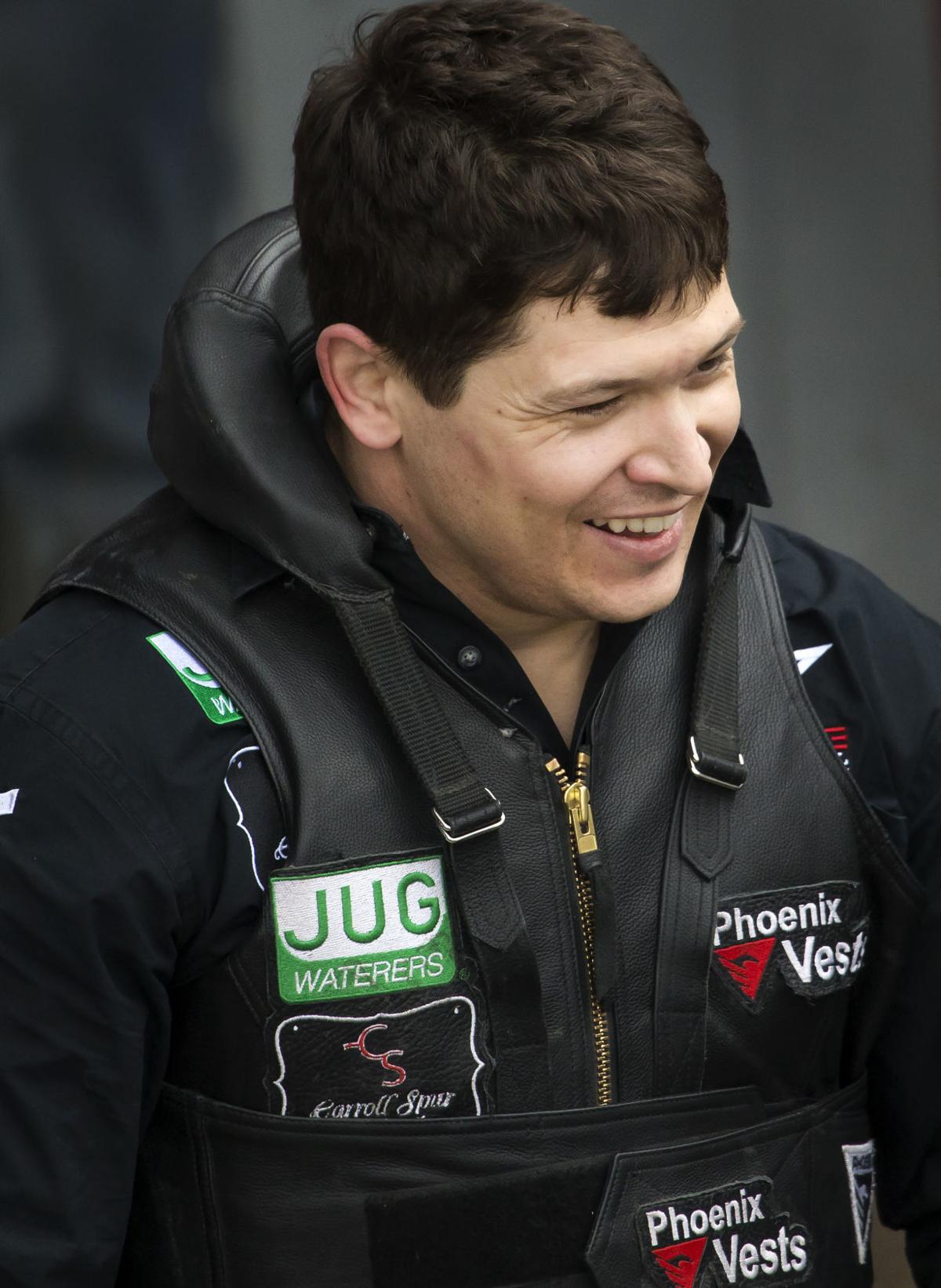 JorDee Kim Nielsen gets thrown off the back of Record Rack’s Little Bill during the bull riding event Sunday. Nielsen wasn’t able to hang on for eight seconds and received no score.

After throwing off the bull rider, Pinball gets into some mischief and knocks over a barrel during Sunday’s Tucson Rodeo.

Nutrena’s Killer Bee is the type of horse that strikes fear into the hearts of grown men. Cowboys, to be exact.

With the ride, Aus also broke an arena record set nearly 15 years ago.

The skies were overcast for the start of the rodeo, as a sell-out crowd of more than 11,000 huddled together on the metal bleachers for the rodeo’s final day, a sea of cowboy hats and denim. The flags that lined the top of the grandstand rippled in the wind, as cowboys waiting for their events to start readied themselves by applying arm wraps, stretching and tightening the belts on their fringed chaps.

Several of Aus’ competitors were jumping up and down on the platform next to the chutes, cheering loudly during what was clearly a special ride. He would later say that had little to do with him and more to do with the horse’s reputation.

When the requisite eight seconds was up and Aus was safely off Killer Bee’s back and running back across the arena, the booming voice of the announcer belted out Aus’ score for the ride: 91.5.

That score, combined with his previous ride score of 87.5, landed Aus the win and set a new arena record, with a two-ride total score of 179. The previous record of 178 points was set in 2006.

Several minutes after he was announced as champion, after receiving congratulations and handshakes from the other riders, Aus still looked a bit stunned as he talked about the ride.

“It felt like a battle from start to finish. It was all I could do just to keep up with her,” Aus said of his ride, adding that he’s only been on Killer Bee one previous time. “That one, it kind of strikes a little bit of terror in your heart when you see your name next to hers. That’s the truth.”

“I couldn’t help but start thinking about it then. It’s really all that’s been on my mind,” Aus said. “I was so gosh-darned nervous last night that I couldn’t sleep.”

“They drove most of the way, I only put in about two hours of driving in a 12-hour drive, so I wasn’t really pulling my weight,” Aus said. “But I really appreciate these guys helping me out, because I think they knew I was pretty nervous.”

Aus, who started in rodeo at the age of 9, is headed home to see his family for a few days before heading to Arlington, Texas, for The American Rodeo. He said it’s been a few weeks since he’s seen his wife and daughter, and he’s looking forward to putting in some time with them.

“For as long as that horse has been good and a little bit scary, it’s had, in my opinion, its best trips here,” Aus said of Killer Bee. “There have been some monster scores posted here in this rodeo on that horse. If you gotta’ get on Killer Bee, the best place to do it is in Tucson.”

Aus isn’t wrong: His 91.5 score in Sunday’s ride almost matched the arena record of 93, set two years ago by Devan Reilly, atop who other than Killer Bee.

Other winners from the 2020 Tucson Rodeo include:

Colter Lee, 11,  is the oldest son of former Pro Rodeo Cowboys Association team roping legend Colter Todd, who retired from the circuit in 2008.

Steven Dent has competed in more than 1,000 rodeos on the PRCA circuit. He has broken a shoulder, torn an MCL, ripped a hamstring, you name it. Yet there he was Friday at La Fiesta de los Vaqueros, one of the country's best rodeos.

Bullrider TJ Gray lives in his truck, rides bulls for a living — and lives his dream

TJ Gray is following his dream, which consists of riding in both bulls and trucks and he pursues the next rodeo.

Tucson's Alex Bowman on Daytona crash, his new car and how he's preparing for Sunday's race in Las Vegas

The Ironwood Ridge High School graduate talked to the Star Friday about his thoughts going into the season, his home track in Phoenix and some childhood and hometown memories.

From fitness classes to networking: How UA athletics is working to improve diversity and inclusion

The University of Arizona's athletics department is taking big steps to make employee diversity, inclusion and engagement a priority.

Not his first rodeo: D-backs pitcher Bumgarner admits to roping under alias

MadBum won over $26,000 at Wickenburg rodeo in December under the name Mason Saunders.

The crash has closed southbound Wilmot Road near Broadway.

Bumgarner has been competing in rodeo events under the alias Mason Saunders.

Richard Gamez, 67, had retired from the sport, but returned to racing at the Tucson track after the death of his wife.

Track officials are distributing a commemorative program and an on-track tribute will take place before the day's racing begins.

Sports teams across Tucson are reacting to concerns about the coronavirus outbreak.

Pima County Animal Care is asking owners who are not facing an immediate crisis to hold off on surrendering healthy pets for up to four weeks.