Two days before Christmas, an impromptu reunion took place inside a sprawling gymnastics facility on Tucson’s northwest side.

Several of Arizona Dynamics Gymnastics’ alumnae, home from college for winter break, dropped into the facility to visit former coaches Gina Mueller-Martin and Tricia Ogle, and their ex-teammates.

Amidst a sea of leotard-clad girls stretching, tumbling and vaulting, three young women took turns embracing and posing for selfies. They wore gear from Yale, Sacramento State and Michigan.

Alexis Belkoff, home for break from her senior year at Sacramento State, smiled big. While the 21-year-old no longer trains at the 12,000 square-foot Arizona Dynamics facility, she did for more than a decade. And she didn’t do it alone.

Alexis was preceded by her older sister Corinne, who leveraged her gymnastic prowess into a scholarship and spot on the Arizona State gymnastics team. Corinne, 23, is now in her first year of law school at Penn.

The end of gymnastics is also near for 21-year-old Alexis, with her final college season starting in a few weeks. The youngest Belkoff sister, Kiersten, will then carry on the family business. The 17-year-old signed a national letter of intent with Penn in November.

Mueller-Martin says that she can’t imagine what it’s going to be like with no Belkoffs in the gym, as there’s been at least one since 2006. She says the sisters are leaders on and off the mats. There’s a joke at Arizona Dynamics about “Belkoff Time” being 5:30 a.m. — the time the sisters typically wake up for a pre-school workout.

The Belkoff sisters are also intensely ambitious outside of gymnastics: Corinne started off studying pre-med before moving on to business law. Alexis is one semester away from graduating with a degree in biology and is in the process of applying to dental school. Kiersten, who attended Catalina Foothills High School like her sisters did, is eagerly anticipating the classes that she’ll be taking at Penn’s world-renowned Wharton School of business.

The Belkoffs embody their coach’s hopes for the gymnasts she trains: They’ve used the sport to help them become successful women.

Corinne, the oldest, led her sisters into the sport.

After going to a gymnastics class with a friend, 5-year-old Corinne was hooked.

“My sisters followed in my footsteps, I guess,” she said. “It’s just a part of our lives now.”

Corinne loved the competitiveness of gymnastics and the relationships she formed with her teammates over the years.

“In college, my (ASU) teammates were my best friends and they still are,” Corinne said. “Just having that tight-knit family is really special, and going through everything together keeps you driven.”

Corinne switched her major from pre-med to business law shortly after her freshman year at ASU ended. She became president of ASU’s student-athlete advisory committee, which allowed to attend meetings at Pac-12 headquarters and work with Pac-12 and ASU lawyers.

“I think gymnastics really got me to where I am at Penn Law,” Corinne said, equating her first semester in law school to learning a new language. “It’s a whole new world, but it’s an incredible environment.”

Transitioning out of gymnastics has been an adjustment, but the timing was right, Corinne said. She thinks her body was at its end.

“I definitely miss the fact that I think that it was an outlet for me,” Corinne said. “Anything that was going on outside of the gym, inside of the gym didn’t matter. All that mattered was the sport.”

Identity-wise, stopping gymnastics was also a bit of a shock, Corinne said, adding that she still considers herself an athlete. At school, people still refer to her as the gymnast, even though she no longer trains.

“I think it’s just part of who I am, and I definitely value that a lot,” Corinne said.

Corinne still works out on her own several days a week, doing cardio work and weightlifting.

“I’m happy working on out my own now, since I’ve had someone tell me what to do for so many years,” Corinne said.

Alexis Belkoff arrived at the gym sporting a large purple and blue knot on the side of her elbow, and so Mueller-Martin restricted her former student to light practice. Mueller-Martin said Sacramento State’s gymnastics coach would kill her if Alexis came back for her final season more injured than when she left.

Alexis visits Tucson, but she’s spent most of her summers in Sacramento training with her team and taking classes. Alexis entered school as an engineering major and changed to biology mid-stream, still set on graduating in four years. She’s on track to finish school in May, but it’s been a grind — much like gymnastics.

Alexis, who is a year and a half younger than her older sister, started gymnastics when she was 4 or 5 years old.

With little time to waste between school, homework and training, Alexis learned to make the most of her day at an early age. It’s a skill that has come in handy in college.

“I spend a lot of time in the library now,” Alexis said. “My teammates are having fun, but I’m studying.”

Getting a full scholarship to Sacramento State and “just being there” the last four years have been the best part of gymnastics for Alexis, who seemed to be channeling her older sister as she talked about her love for her college coaches and teammates.

“It’s more of a team environment in college,” she said.

Alexis is eying two dental schools in Arizona, but has also applied to New York University, since her grandfather and great-grandfather went there.

The dental school application process is very competitive, but the Belkoff sisters are no strangers to competition.

“I’m surprised we all made it, honestly,” Alexis said of her family’s success in gymnastics. “I feel like we pushed each other. It was nice if you had a bad day to turn to your sister. You always knew they’d have your back.”

When asked to consider a future without gymnastics, Alexis took a long pause.

“It’ll definitely be weird,” she said.

‘I can just kind of let go’

Penn doesn’t award merit-based or athletic scholarships, but Kiersten’s invitation to join the school’s gymnastics team carries just as much weight as her sisters’ college scholarships. And while she’ll be near Corinne during the school year, her sister’s attendance at Penn’s law school wasn’t a deciding factor.

“I love it there, I love the coaches,” Kiersten said of Penn, which she fell in love with after attending a gymnastics camp at the school two summers ago. She connected with the coach right away.

Gymnastics was just sort of the natural step for Kiersten, once she was old enough to train.

“I just kind of followed them into it and I just loved it and kept going,” Kiersten said. “The opportunities it’s given me, like getting into Penn, you can’t get from something else.”

Arizona high schools don’t offer gymnastics as a sport. Kiersten has one more season on the Arizona Dynamics club team, and will train at the gym during the summer before leaving for college. She trains five days a week after school, as do most of her teammates at Arizona Dynamics. And despite the rigorous schedule, Kiersten, like her sisters, is also a strong performer academically. She speaks excitedly about attending business school at Wharton next year, saying that she still has to chose a concentration inside the major.

Kiersten’s advice to young gymnasts echoes that of her sisters, nearly word for word: “Keep with it, because there’s a lot of hard days.”

“I know I go through fear a lot of times, because there’s always something to be scared about,” Kiersten said. “But you’ve got to push through.”

‘Doing their best when it counts’

Mueller-Martin says the Belkoff sisters inspire their teammates with their hard work, and that their love for gymnastics is almost immeasurable.

“They’re great competitors and they can handle pressure and step up in competition,” she said. “They all have that good quality of doing their best when it counts.”

Each sister has her own personality, but Corinne has truly been the leader, Mueller-Martin said.

“It’s been nice because when Corinne left for college there were still two of them, and then Alexis left and we thought it was going to be weird for Kiersten, but she was fine,” Mueller-Martin said.

That’s when Kiersten really began to shine, Mueller-Martin said. Just like her sisters did.

“It’s not about the scholarship, it’s not about winning. It’s about raising these girls to be successful in life,” Mueller-Martin said.

Tucson Youth Football and Spirit Federation's 10U Southwest Rams and 14U All Star team traveled to Florida last week for the event. 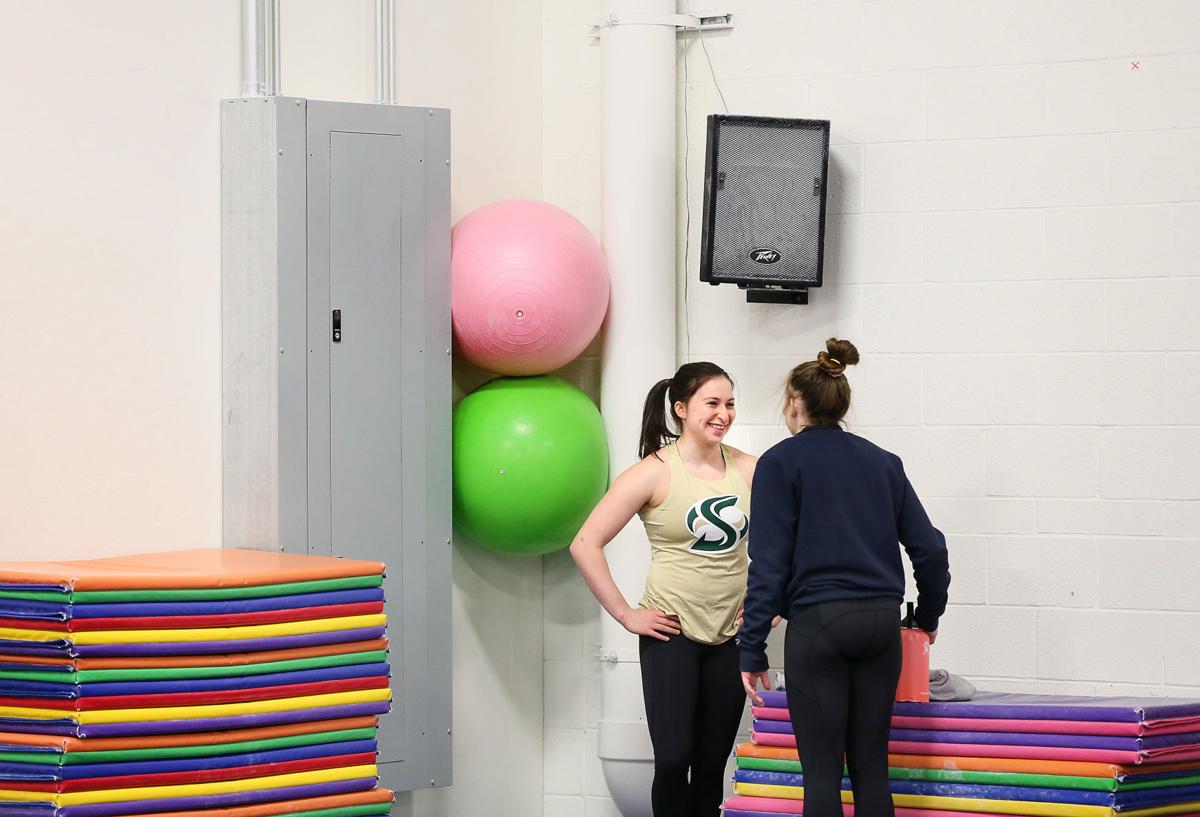 Alexis Belkoff, 21, left, talks with her sister, Kiersten, 17, at Arizona Dynamics Gymnastics in December. “I’m surprised we all made it, honestly,” Alexis said.“I feel like we pushed each other.” 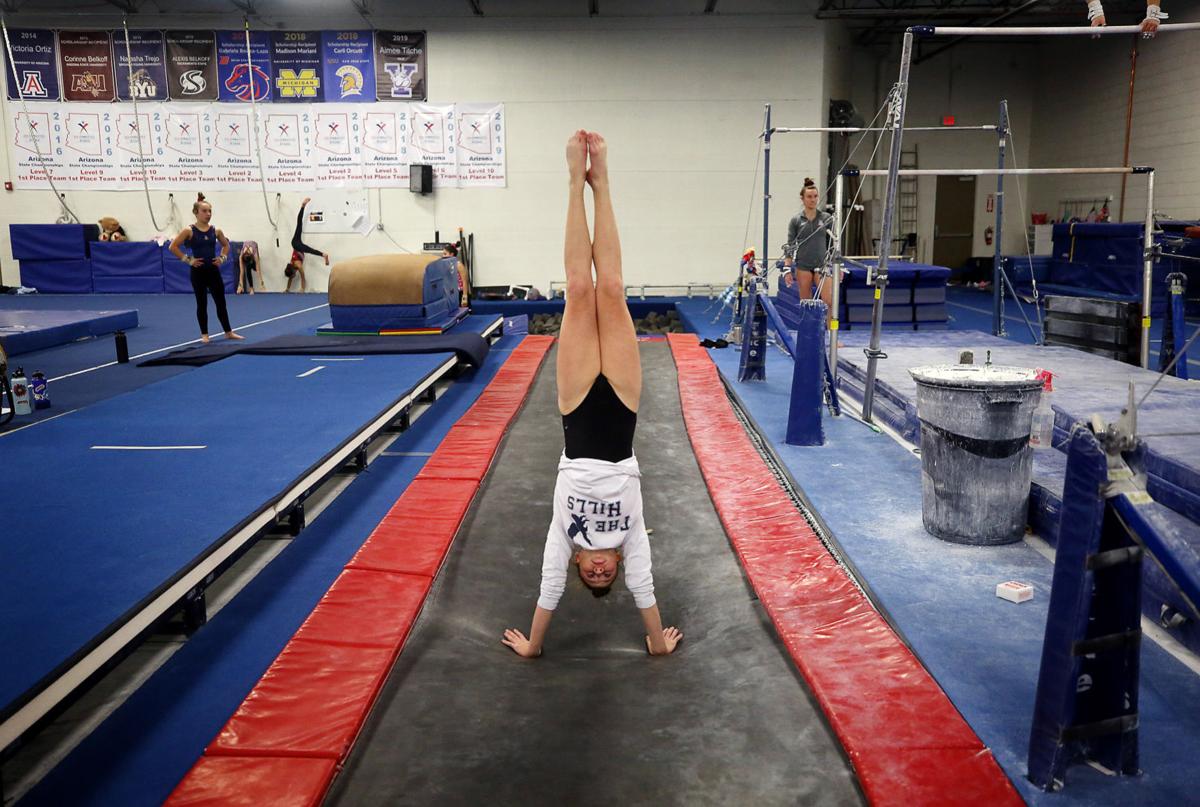 Kiersten Belkoff, 17, negotiates a handstand during a workout at Arizona Dynamics Gymnastics. Kiersten signed her letter of intent with University of Pennsylvania in mid-November and will compete with the gymnastics team. 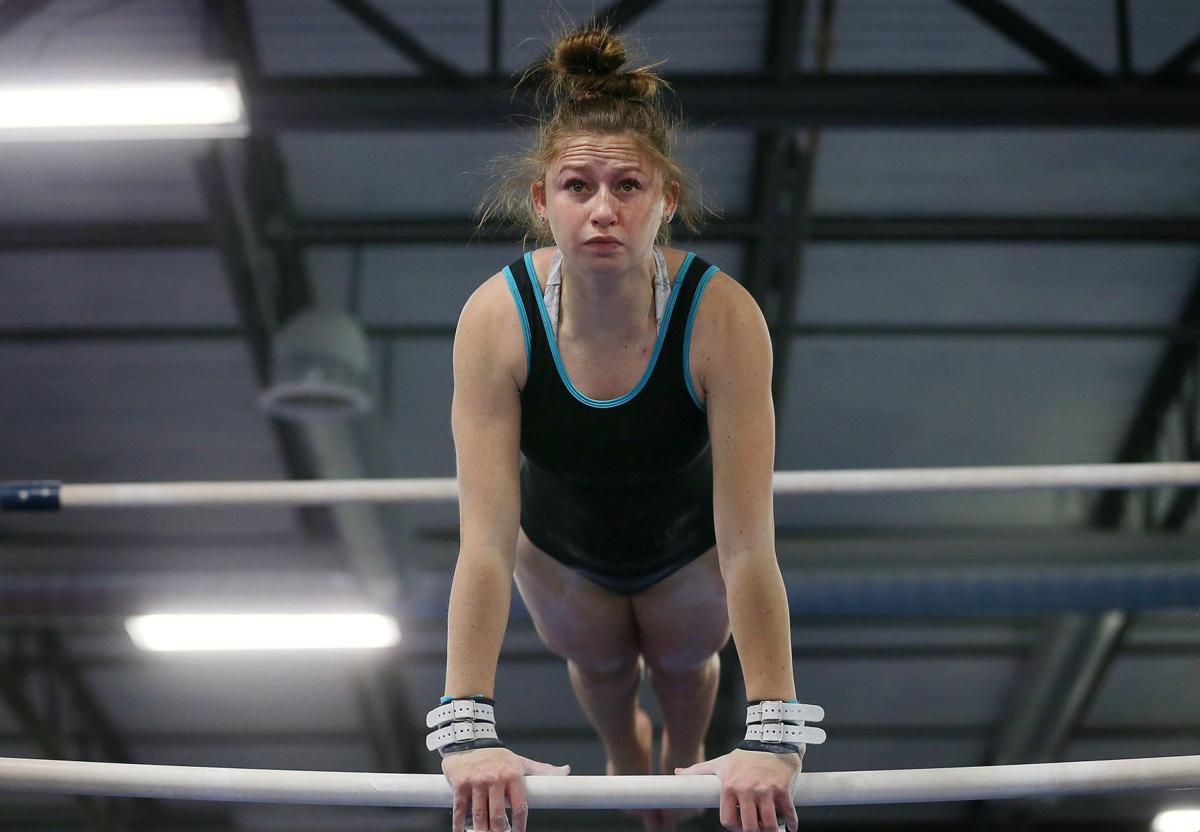 Kiersten Belkoff, 17, negociates the parallel bars during a workout at Arizona Dynamics Gymnastics, 3949 W. Costco Dr., on December 23, 2019. Kiersten signed her letter of intent with University of Pennsylvania in mid-November and will compete with the gymnastics team. Both of her older sisters also competed on the gymnastics team. 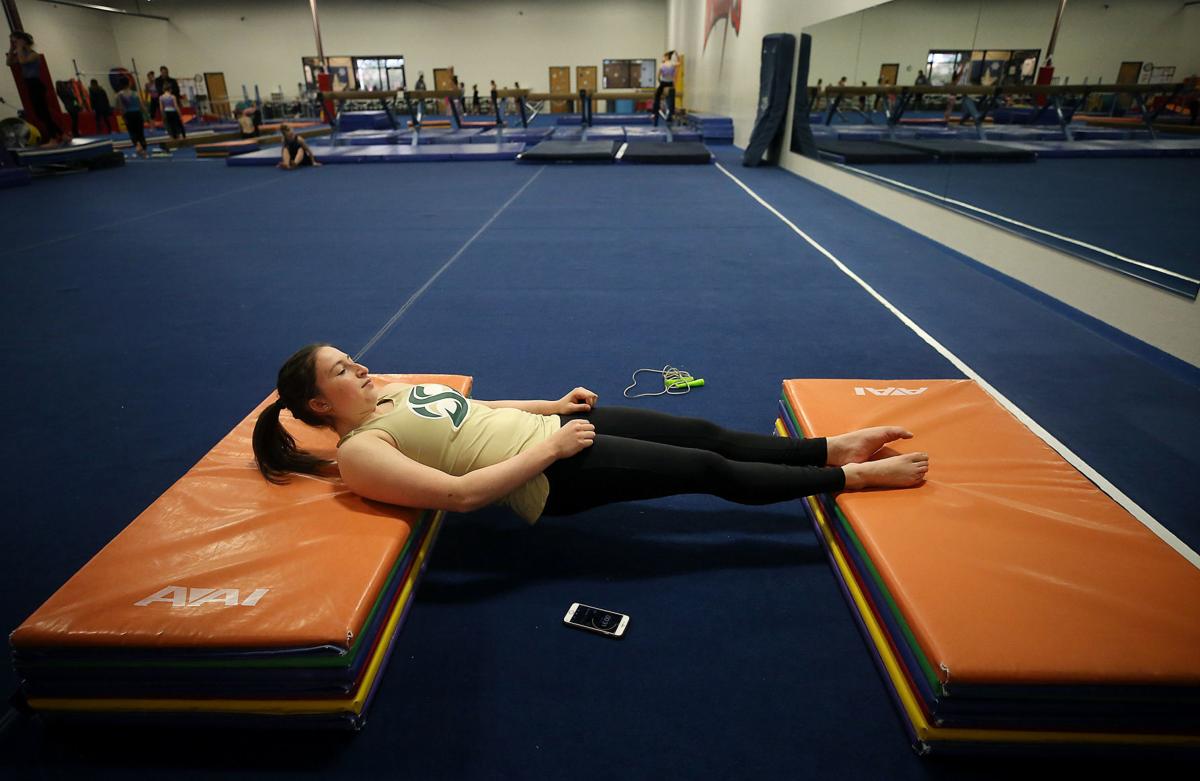 Alexis Belkoff, 21, performs some conditioning workouts at Arizona Dynamics Gymnastics. Belkoff was home for the holidays from Sacramento State where she’s on the gymnastics team. 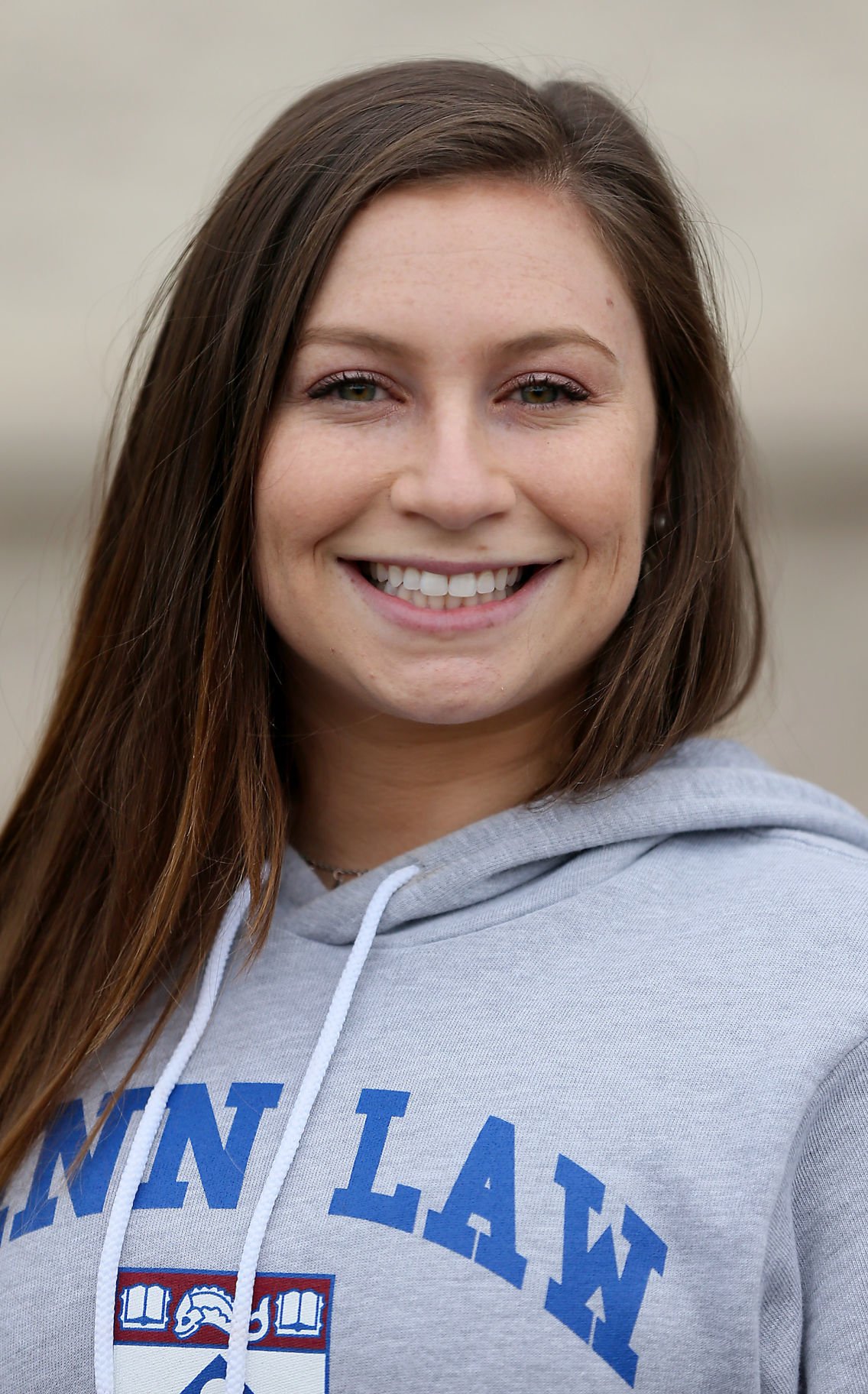