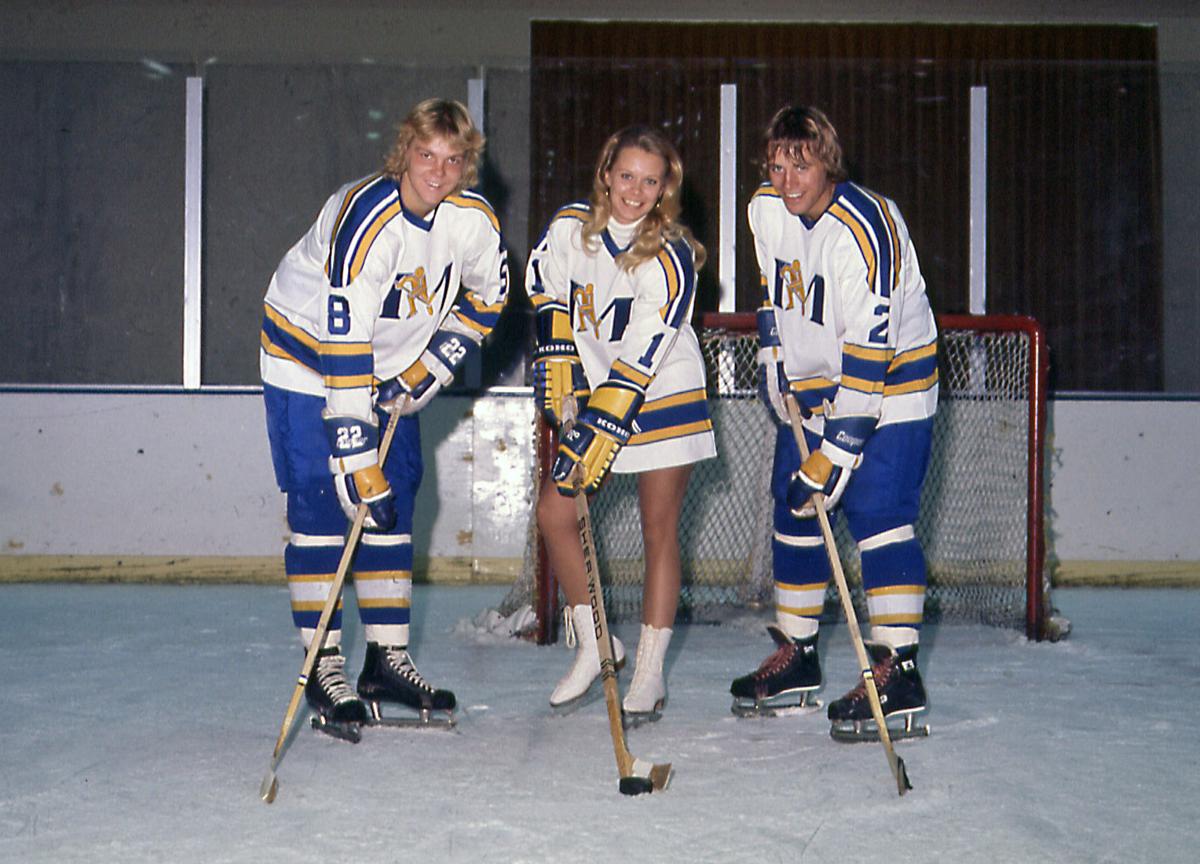 Tucson Mavericks players Neil Lyseng, left, and Blair Davidson with an unidentified woman during the 1975-76 season. 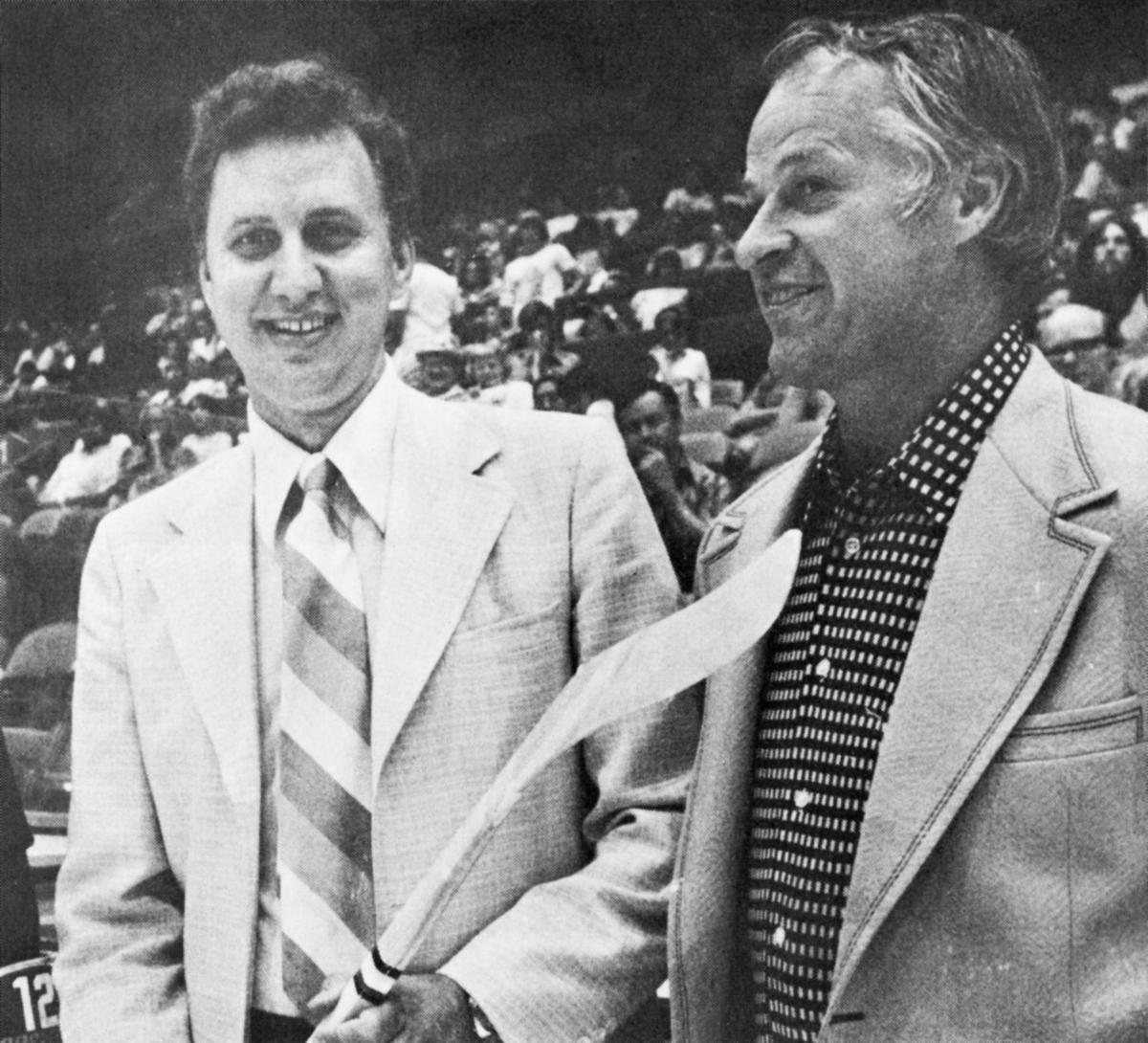 Tucson has been branded for decades as a failed minor-league sports city, and many fans simply believe that pro teams — especially hockey teams — are destined to fail here. But fans usually can’t put a finger on exactly why Tucson’s hockey history seems checkered, or why those same pieces now seem in place for pro hockey success.

Tucson’s hockey past could tell us about our American Hockey League Tucson Roadrunners’ future.

Tucson, after all, has been chasing minor league hockey success for more than 40 years. The Tucson Convention Center was still new in 1975, and a minor-league hockey team was seen as a natural fit as a tenant.

So the Central Hockey League Tucson Mavericks were born, a child of the 1970s pro hockey expansion ushered in by the upstart major league World Hockey Association. The WHA opened up new franchises in major cities, and Phoenix had a team named — wait for it — the Roadrunners. All those new major league WHA teams needed new minor league affiliates, and Tucson was a natural fit for the parent Phoenix squad.

This all sounds familiar for fans of Tucson’s brand-new franchise, and even the logo for the new Tucson Roadrunners is a variation of that old WHA team crest.

The 1975-76 Mavericks featured players being developed by Phoenix, Houston, San Diego and Denver of the WHA. They were the youngest team in the six-squad CHL, an expansion team created by other expansion teams, and that inexperience showed on the ice.

Longtime minor-league sports executive Mike Feder was only 22 years old then, and a half-season administrative assistant position was his first job with a Tucson pro team.

“I never saw the team win a game,” Feder chuckles, noting the team’s excruciating two wins in its first 29 games. “But helping to start a pro hockey team here was a lot of fun, and the games were fun, too.”

The Mavericks were created by Merle Miller and Roy Jackson, the same duo who brought the minor-league baseball Toros to Tucson in 1969. Miller went on to other Tucson sports ventures, notably the Copper Bowl college football game in Arizona Stadium.

Miller, who still lives in Tucson, says the team was economically viable, even though Tucson was much smaller then than it is today. The Mavericks had a sincere connection to Tucson, and some locals now wonder if the new Roadrunners — early in their existence reflecting a very Phoenix-styled corporate culture — will understand their new hometown.

“We had many crowds with over 2,000 fans, with crowds up to 6,000 for special nights. We also had some rabid fans,” Miller said. “Our fan club made a huge cake to celebrate with the team our first win, but it took so long for us to win that first game that no one got to eat it because it got too old.

“A lot of the same fans went to games for both the Toros and Mavericks, a real Tucson crowd. Oh, and they made a new cake.”

The team won only 14 games in that ’75-’76 season, a poor (but not unusual) result for an expansion franchise. The future actually looked bright.

“We planned to come back for a second season, we never thought we wouldn’t,” Miller said.

The massive hockey expansion in both major hockey leagues was headed for an economic reality check, with the financial implications wiping out new minor-league teams like the Mavericks. The WHA Denver Spurs folded in midseason, and both Houston and San Diego struggled. The WHA Roadrunners were just scraping by and couldn’t afford their affiliate.

“The Roadrunners ended up owing us $150,000 at the end of season, which they never did pay us,” Miller said. “That money was for their players in Tucson.”

Despite all that, Miller planned for the Mavericks to return for Year 2.

But then, Miller says, another proposed team approached the TCC, and the city — anticipating a bidding war — doubled the Mavericks’ proposed rent for a second season.

The Mavericks were forced out of business, and the pro hockey team was out at the TCC.

Struggles with the city of Tucson and adversarial management at the TCC became a reoccurring complaint by teams attempting to move to Tucson or remain here over the next decades. While the Mavericks were labeled a failure, many believe that the franchise would have prospered if the TCC had operated more reasonably.

Feder tips his hat to Miller, after all these years, for the Mavericks.

“It is really difficult to start a new franchise. You have to have someone in the organization deeply entrenched in your community who understands the pulse of your community. Merle was that guy, and that really helped.”

Arizona lost its first major league hockey team in 1977, when the Phoenix Roadrunners folded. Surviving teams from the WHA would later merge with the NHL in 1979, reducing even more the major and minor teams around North America.

But the WHA was not done with its direct influence on Tucson’s minor-league hockey — which had more tragic chapters to write before its rebirth coming this October at that same Tucson Convention Center arena.

And there was one shining success story coming, too.

Over the next three Saturdays, local  hockey historian and author Timothy Gassen is telling the story of Tucson hockey through the years.

Next week: The minor league fates of The Tucson Icemen and Rustlers.

Tucson Mavericks players Neil Lyseng, left, and Blair Davidson with an unidentified woman during the 1975-76 season.