Feb. 23 was like any other short-go at La Fiesta de los Vaqueros, full of hootin’ and hollerin’, dirt and dust, and plenty of cold, hard cash.

Alberta’s Curtis Cassidy took home more than $6,000 as the All-Around Champion that day. Jesse Wright, part of the legendary saddle-bronc riding dynasty out in Milford, Utah, won more than $4,000 on the day. Ky Hamilton, a bull rider from all the way in Mackay, Australia, took first place on the afternoon, and for the event, racking up an impressive 175.5 points on two steers.

For Tucson Rodeo general manager Gary Williams, it was yet another feather in another cap.

But over 1,000 miles away in Houston, just before one of rodeo’s premier events, trouble was brewing.

On Feb. 27, an attendee at the Houston Rodeo World’s Championship Bar-B-Que brought COVID-19 into the facility. Eight days later, it was canceled.

The Tucson Rodeo ended up being the last major rodeo of the season.

“We got in by the skin of our teeth,” Williams said. “Of course, we didn’t know it then.”

But now, with the pandemic threatening some of the most important rodeos of the summer, Williams and his barebacking brethren are worried about the future of the sport they love most.

This time of year is essentially the rodeo offseason. There are good little rodeos all over — including this weekend’s Cave Creek Rodeo — but for the most part, cowboys kick off their boots and rest their aching bones for much of April and May.

By June, though, competitors are raring to go, especially when the Reno Rodeo rolls around.

Not this year, though.

Reno has been canceled, a decision general manager George Combs said “was not an easy decision.”

“We had hoped the state and nation’s recovery from this pandemic would allow for community events by mid-June and this would be something the region could look forward to,” Combs said in a statement. “Unfortunately, this global crisis has forced us all to make sacrifices and work through this unprecedented situation. After many discussions with leading government and health authorities, as well as the Professional Rodeo Cowboys Association, we are certain that this is the right action.”

The shuttering of the Reno Rodeo was a shock to the cowboy community.

Now, Williams said rodeoers are worried that the granddaddy of them all — the Cheyenne Frontier Days in Cheyenne, Wyoming — is going to be shut down as well.

“I haven’t spoken to anyone in Cheyenne, but I know they’re in jeopardy,” said Williams of the late-July extravaganza, which draws fans from all over the world. “The governor has said no concerts, and the Cheyenne committee said we need those concerts to be viable.”

“Then you take the Fourth of July — Greeley (Colorado) is canceled, St. Paul, Oregon, is canceled,” Williams said. “Nobody knows where this thing is gonna go.”

And just like that, with the heart of its season in peril, a sport that doubles as a lifestyle worries if it’ll ever be the same again.

Life on the road is not easy.

Just ask Marana’s Sherry Cervi, one of the area’s most successful athletes regardless of sport.

But Cervi, the Women’s Professional Rodeo Association’s all-time highest-earning athlete, was eagerly anticipating this season’s summer slate. Her husband, team roper Cory Petska, had just found a new partner and was looking to get back to the National Finals Rodeo — the Super Bowl of rodeo — in December in Las Vegas.

Now, with Reno and other prominent jackpots shelved, they are reassessing their 2020 plans.

“The unknown is what’s hard,” Cervi said by phone. “That’s for the whole country, though. I’m not just saying rodeo.”

Cervi and her husband are up in Wisconsin, helping Cervi’s parents put out cattle. This would be her downtime, anyway.

But the summer planning starts early. Or, at least, it would have.

“Normally, we would’ve made our RV and stall reservations for Reno in April, planning for June,” she said. “Then we’d be planning where we’d go (for) Fourth of July.”

What makes things particularly difficult are not just the closings of several prominent rodeos, but the smaller jackpots that make life on the road financially viable. Good rodeoers don’t just hunt for beaucoup bucks at the big events. Gas money is earned in tiny towns all over the West.

“The Fourth of July, we’re used to going to eight to 10 rodeos around that time,” Cervi said. “Maybe we get one or two this year.”

Cervi has been on the phone with some of her fellow racers, and she hears the strain in their voices.

“For the people who make their money in rodeo, they’re finding side jobs now,” she said. “The talk from some of the contestants is we wish we knew (that), yes, we are going to have, say, 20 rodeos, or not. A lot of people would just go get a job, or plan on doing something else. We’re basically waiting week by week. You don’t want to commit and then see they announce a rodeo is on.”

For now, Cervi and Petska wait. What else can they do, other than herd cattle?

“The week of Reno, not going out for that, it’s going to be like, ‘Wow, this is really happening,’” she said. “Literally a week before this hit, my husband got a new team roping partner, and they decided they’d start at Reno and try to make the finals.”

What about next year?

“We’re just as nervous as anyone,” Williams said. “I was just on a video conference call with San Antonio, and they do their season ticket renewals, and they’re including language about canceling next year.”

Even if the Tucson Rodeo is allowed to proceed in February, will fans have a desire to gather in large crowds?

There sure is an appetite for the cowboys themselves. Williams said the Cave Creek Rodeo, which concludes Sunday, expected more than 600 entrants; in a normal year, the small event would draw maybe 200. Regulations are in place for the competitors, including mandatory temperature testing. Anything over 100.3 degrees, and contestants will be drawn out and removed from the grounds.

But, Williams said, at least the show is going on.

“This is going to be their moment in the sunshine,” Williams said. “It’s the biggest thing that’s ever happened to Cave Creek. But there won’t be anyone there to see it.”

That’s because the event is closed to the public, the stands empty.

How is that going to change going forward?

“The big bugaboo — and it’s not just us, it’s all sports — is trying to figure out how social distancing works with grandstands,” Williams said. “One of the PRCA guidelines is you can’t have any seating within 6 feet of the arena; well, that eliminates our whole first row of boxed seats. A lot of those people have had those boxes for 30 years. We’re going to have to move them. Then it becomes, can you get enough people in there to make it feasible?

“That’s what a lot of rodeos are wrestling with.”

Normally the only wrestling in rodeo is with steers.

What Williams and Co. wouldn’t give for those simpler times, when the scariest thing to imagine was a snorting 1,200-pound animal.

Grant Weitman grew up going to UA basketball games as part of a well-accomplished family of athletes. But it's his play on the way to a Class 4A state championship that got him a spot on Sean Miller's roster.

Whether seasons can be saved is unclear, but worried UA season-ticket holders can save their seats

A new policy enables owners of Wildcat football and basketball season plans to skip the upcoming campaigns but keep their spots; capacity at Arizona Stadium and McKale Center is expected to be limited anyway.

PGA Tour is set to return in just over two weeks.

Nick Gonzales, who is projected to be a top-five pick in the MLB draft, was named the National Player of the Year by Collegiate Baseball.

Mark Baird, Tucson Rodeo's chairman of the board, said there is "too much uncertainty to take the chance of continuing forward." Instead, rodeo officials will focus on the 2022 event, which is scheduled for the final week in February. 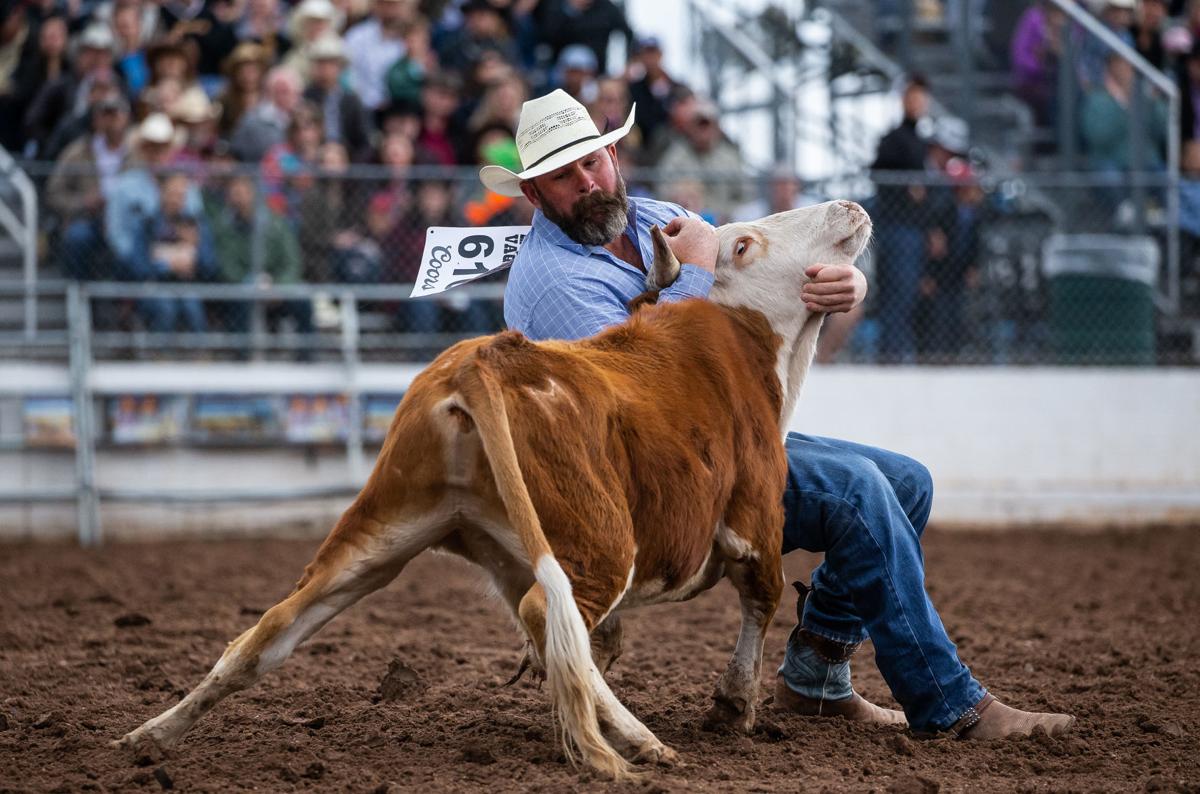 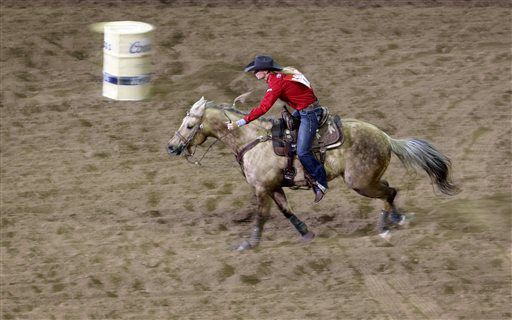 In this photo taken with a slow shutter speed, barrel racer Sherry Cervi from Marana, Ariz., competes during the seventh go-round of the 2014 National Finals Rodeo.