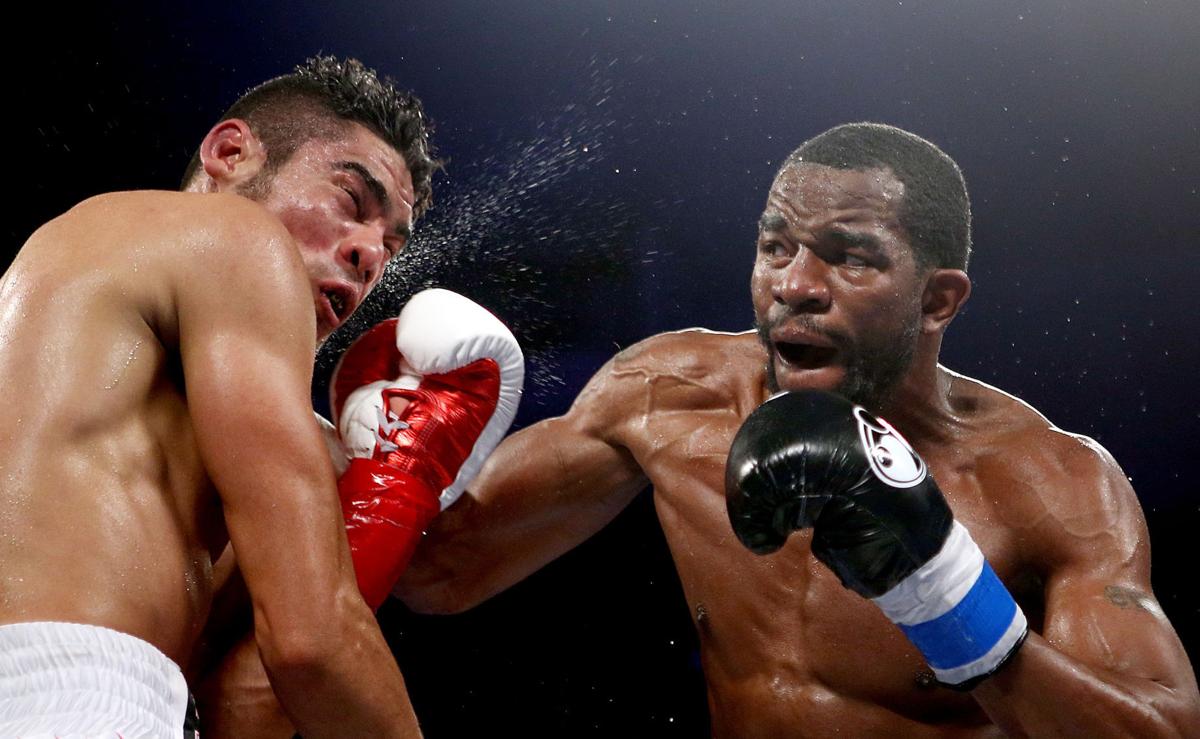 Jesse Hart, right, ended up falling to Gilberto Ramirez. Still, Hart was particularly upbeat after the 12-round performance. 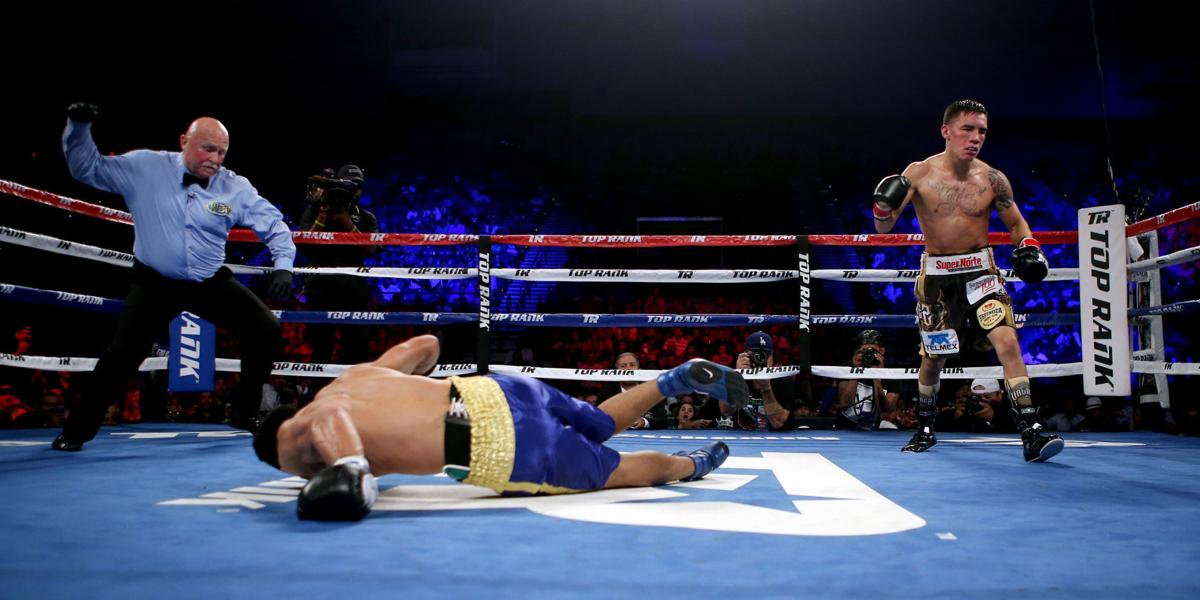 Genesis Servania, bottom, celebrated his performance after a unanimous decision, 12-round bout against Oscar Valdez, right. Servania hit the mat after a punch in the fifth round, shown above. Valdez, a Tucson local, retained his featherweight title.

The Top Rank boxing card at Tucson Arena had to jump stations because of an extra innings baseball game on ESPN. ESPN2, ESPNews and the WatchESPN app made way for the bouts.

Thanks to an extra-inning Cubs-Brewers game that kept bleeding into its much-valued ESPN window, Top Rank held a boxing show Friday that hopped from Tucson all across the sports broadcasting giant’s platforms.

The WatchESPN app carried the undercard bouts from Tucson Arena. ESPNews was summoned to show Irish hero Michael Conlan stopping Montana featherweight Kenny Guzman in the second round of a featherweight bout because, over on ESPN, the National League Central rivals were only in the eighth inning.

Then it was ESPN2’s turn to pinch-hit. While the Cubs and Brewers coasted into extra innings, that channel carried the first eight rounds of a WBO super middleweight title fight. Those expecting to watch on ESPN missed the riveting second and fourth rounds, when Sinoloan Gilberto Ramirez nearly made quick work of tough-talking and tough-acting Philadelphian Jesse Hart.

Finally, after Cubs won it in 10 innings, ESPN swooped in to pick up Hart-Ramirez in the ninth round. At the time, Hart was making a too-little, too-late comeback attempt in Ramirez’s 12-round unanimous decision.

ESPN carried all of the main event: Dual Mexico/U.S. citizen Oscar Valdez, the lightweight who wore a patch calling himself “100 percent Sonoran,” defended his WBO belt in a 12-round unanimous decision over Genesis Servania.

Entertainment was everywhere, even if the stage kept changing.

Top Rank promoter Bob Arum agreed, even if the fight didn’t get the full ESPN airtime he had been seeking.

Top Rank had just completed a deal with ESPN last month to provide regular high-quality cards in an effort to grow the sport’s fan base on nearly free TV instead of on premium or pay-per-view channels.

“They had the whole fight on,” Arum said of ESPN networks. “At first it was ESPNews, then ESPN2 and then ESPN1. But people followed it. They just turned the dial.”

Arum also shrugged off another possible letdown: That only 4,103 fans bought tickets for what was arguably Tucson’s best overall boxing card of the current century and certainly one of the top three (Fernando Vargas appeared at Casino Del Sol in 2003 and Juan Manual Marquez fought at Desert Diamond Casino in 2007).

Arum said Friday’s show was at a disadvantage selling tickets because it was competing with the UA-Utah football game. Top Rank was asked to go on Friday instead of a preferred Saturday evening time because of ESPN’s football commitments. That meant early starts — 4:30 p.m. for the undercard and 7:30 for the main events — that conflicted with some fans’ work schedules.

“I think it was great,” he said after Friday’s show. “We had a tremendous walk-up — 774 people walked up this afternoon and bought tickets, so we had 4,000 people and maybe a little bit more, and a lot of the dreamers came out and picked up their free tickets (500 were offered to DACA participants). It was a success.

“I was sitting next to the mayor (Jonathan Rothschild) and he was thrilled. It was terrific. People saw a really good, good show at non-Las Vegas prices, right? I mean, for $5,000 you could have bought a whole section here.”

Of course, it’s Arum’s job to hype his own firm’s fights. But what also happened Friday is that just about everyone else appeared to leave Tucson Arena in a good mood, too.

The fans overwhelmingly supported the two Mexican champions, the winners … and even the losers.

This was Hart after he lost the 12-rounder to Ramirez:

Servania, too, celebrated as if he had won, taking a ride on his cornerman’s shoulders after hanging with Valdez for 12 rounds. The previously unbeaten Filipino also held his arms up in front of the Tucson Arena’s west side stands, where fans cheered his efforts almost as much as they did for Valdez’s victory.

Of the winners, Conlan was moving on to bigger things, being placed on the undercard of the Dec. 9 show at Madison Square Garden that will feature former Olympic gold medalists Vasyl Lomachenko and Guillermo Rigondeaux.

But Valdez said he wants to return to what has become his boxing home base, having now won twice in Tucson over the past two years.

Wherever Valdez fights, of course, he can draw a crowd, being 23-0 (19 KOs) and possessing an array of sometimes deceptively quick and powerful punches at age 26.

He just likes it better when his grandparents, parents and friends are in the crowd.

“I love this place,” Valdez said. “I love Tucson.”

Tucson-bred boxer Oscar Valdez is speaking up for 'dreamers' ahead of his Friday bout, and doesn't plan on backing down.

Two were in town to promote Sept. 22 card at Tucson Arena.

Greg Hansen: Loss to bumbling Utes has sent Arizona Wildcats to the dark side

Wildcats' Pac-12 struggles continue, and soon they won't have the comforts of home anymore.

The Court of Appeals got it wrong in concluding "dreamers'' are not entitled to in-state tuition, the lawyer for Pima Community College contends.

Jesse Hart, right, ended up falling to Gilberto Ramirez. Still, Hart was particularly upbeat after the 12-round performance.

Genesis Servania, bottom, celebrated his performance after a unanimous decision, 12-round bout against Oscar Valdez, right. Servania hit the mat after a punch in the fifth round, shown above. Valdez, a Tucson local, retained his featherweight title.

The Top Rank boxing card at Tucson Arena had to jump stations because of an extra innings baseball game on ESPN. ESPN2, ESPNews and the WatchESPN app made way for the bouts.