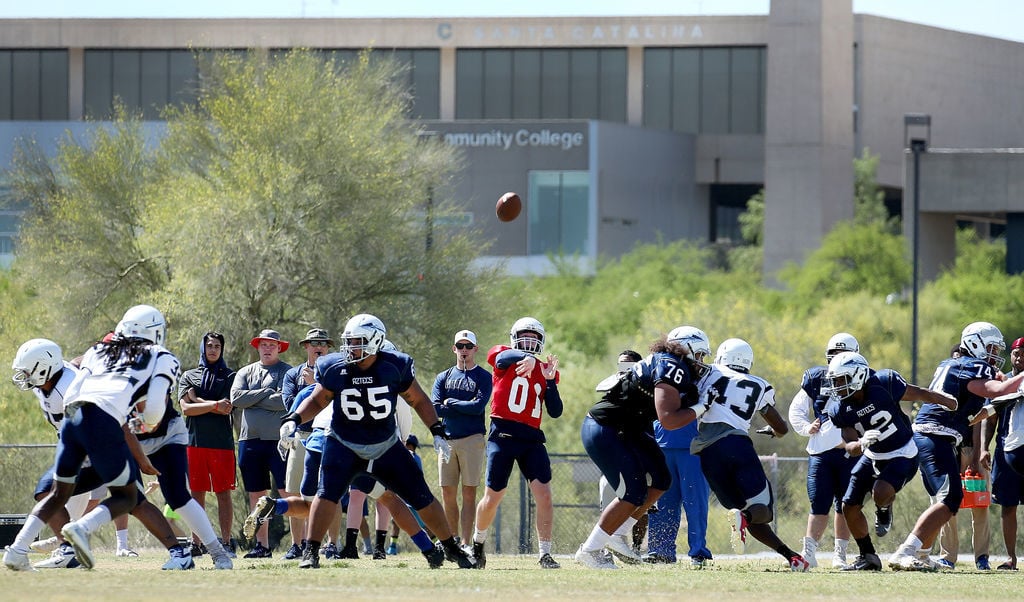 Quarterback Caleb Ryden uncorks a pass during Pima’s spring game on Saturday. The Aztecs face an uncertain future as four league opponents will drop their programs following the 2018 season. 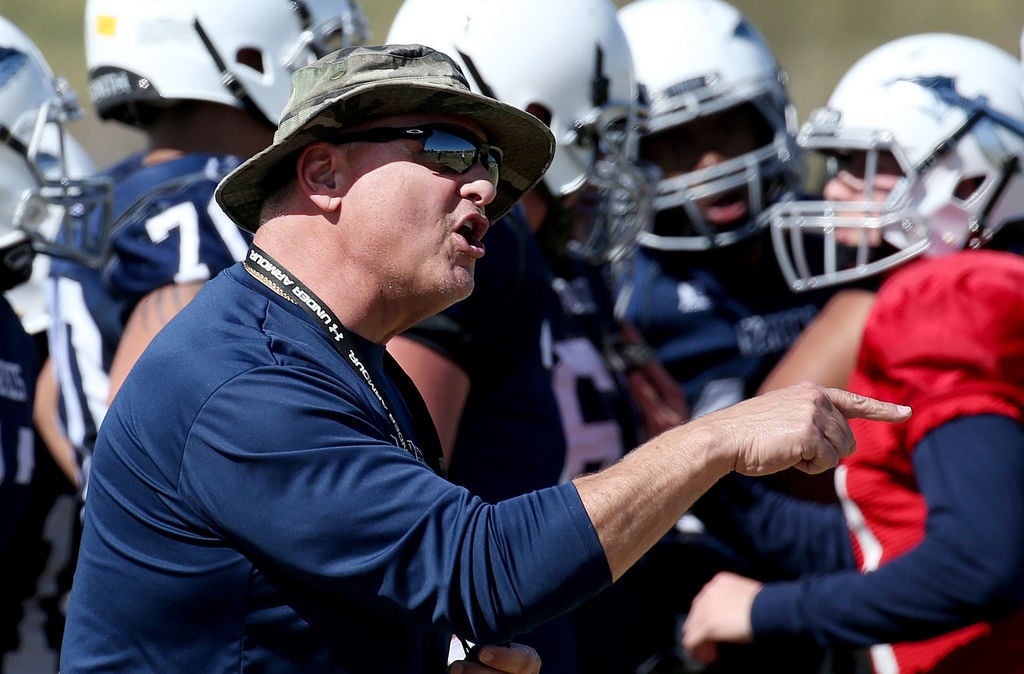 Pima head coach Jim Monaco has a chat with some players during the Aztecs’ spring game on Saturday. This may be Pima’s last season. 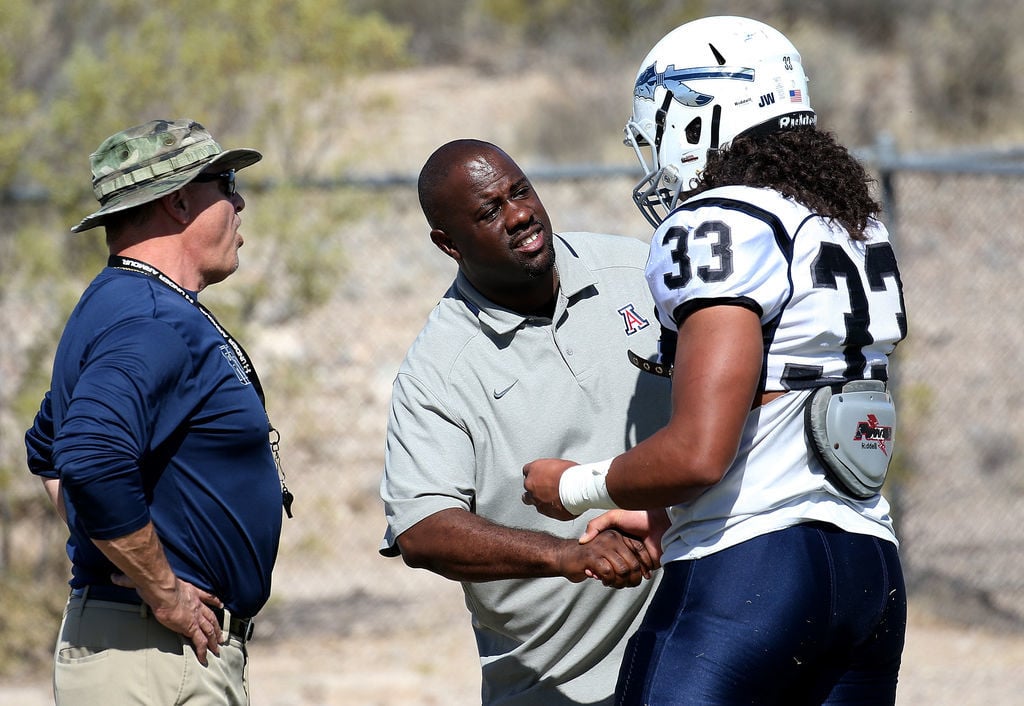 Christian Maddox was born in Tucson, moved to South Carolina at age 4 and moved back to the Old Pueblo to play cornerback for the Pima College football team.

It was a perfect fit for many reasons.

Maddox’s father, Richard, was a captain on the UA’s Desert Swarm team of 1992. His older brother, Aaron, turned a successful Pima career into a full ride to the University of Colorado. He enrolled there in December.

Christian and Aaron Maddox’s older brother will enroll in — and play at — Pima next season.

Christian Maddox may or may not suit up for the Aztecs again next season. If not, it’s because he’s accepted a scholarship offer to a four-year school. The UA, South Carolina and Texas Tech are all showing interest.

“But I couldn’t do it without Pima,” he said. “This was the best school I could have chosen.”

But Pima may not be an option for future football players.

In February, the Maricopa County Community College District announced it would eliminate the football programs at Phoenix, Scottsdale, Mesa and Glendale community colleges starting in 2019.

Pima officials are weighing whether to follow suit. With few in-state teams to compete against, Pima would be forced to travel further — and more frequently — for games. Expenses are likely to skyrocket.

The Aztecs may have just one season left. Saturday’s spring game may have been their last.

Still, Pima coach Jim Monaco said he’s preparing for the upcoming season as if the future of the program isn’t in question.

“We’re not sure what’s going to happen. We’re hoping for the best, we’re working hard to make sure it works out to our advantage, but we can’t plan for it not to happen,” he said. “So, we’re going to try to win a conference and get all these kids graduated and moved on.”

Returner Sam Moala said he’s entering the upcoming season with the same mentality as last year. He won’t let the uncertainty affect him.

However, Monaco said he believes the grim future of Pima football will not become a reality. He said the school’s chancellor, board and staff are all working hard to make sure football isn’t cut.

Monaco believes the program has a chance.

“We’re going ahead like we’re going to go,” Monaco said. “And I think, when it comes down to it, I believe the chancellor and the board will make the right decision. And I think it will be to keep football and let us see what we can do with everything that we’ve promised.”

Maddox said it’s devastating that Pima may not have a football program after the 2018 season. He’s even made phone calls to connections back home in an attempt to save the program.

“I love Pima football. I can’t imagine it not being here,” Maddox said. “It’s just an outlet for kids that need a second chance.”

Heeke agrees with many of Rice's recommendations, but prefers "baseball model" for players who want to turn pro.

Opinion by Chuck Cecil: Social media has changed the game for players and coaches

Social media is about more than the mistakes of a teenage Josh Allen, Arizona Wildcats legend and coach says.

A day after the City of Nogales lost police officer Jesus Cordova to a shooting at the scene of a carjacking, the Nogales High School baseball…

Wildcats get back to .500 in Pac-12 play with fifth straight win.

UA improves to 35-13 overall with 9-1 victory over visiting Beavers.

Winner will davance to the May 10 semifinals, with the loser falling to the loser-bracket.

Arizona freshman Dominic Gehr will be competing in only his second collegiate decathlon this weekend. Alyssa Thompson is a fifth-year senior r…

Catalina rallies to win in Class 3A state baseball opener, will face No. 1 Sabino

Team will play Saturday afternoon with a chance to advance to the state semifinals.

For Arizona ace Taylor McQuillin, Selena connection was a million to one shot

Greg Hansen: Pima football program building momentum, but its days may be numbered

Former UA coach Dick Tomey among those who spoke Wednesday on future of Aztecs.

Pima College football program's future could be decided this week

Pima chancellor Lee Lambert will make decision on program's future — and that of the other teams — on Thursday morning.

Quarterback Caleb Ryden uncorks a pass during Pima’s spring game on Saturday. The Aztecs face an uncertain future as four league opponents will drop their programs following the 2018 season.

Pima head coach Jim Monaco has a chat with some players during the Aztecs’ spring game on Saturday. This may be Pima’s last season.