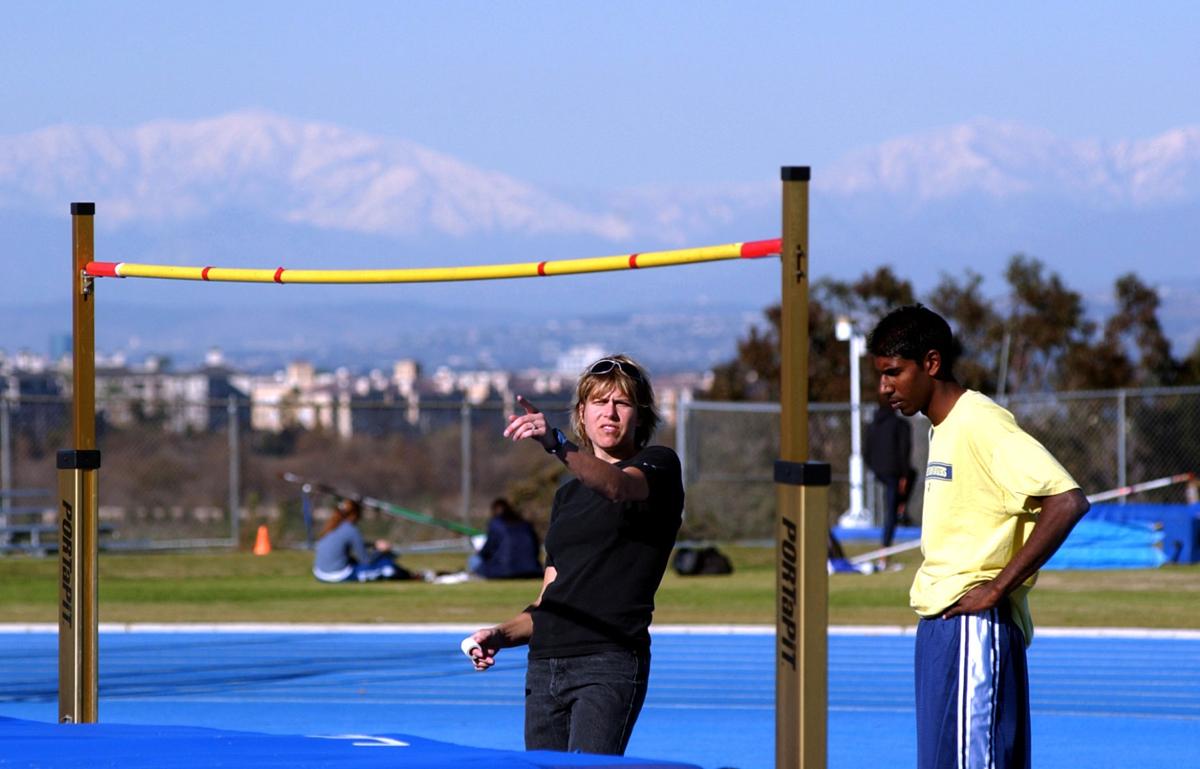 Tucson’s Gwen Mikinski trains track and field athletes and, when the time comes, helps them find colleges that fit their academic and athletic needs. 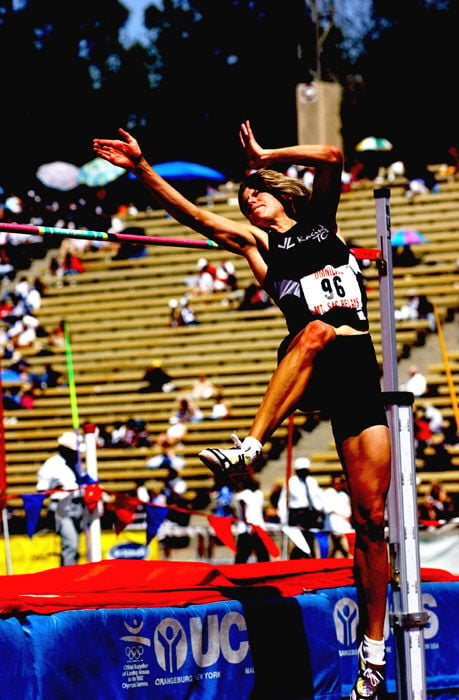 Gwen Mikinski competed in the 2004 Olympic Trials shortly after giving birth to her daughter, Paris.

Two weeks after Gwen Mikinski competed in the 2003 World Track and Field Championships, the record-holding high jumper found out she was pregnant.

Mikinski was ecstatic, but there was a hitch: She had qualified for the 2004 Olympic Trials, and the timing posed a bit of a challenge.

Mikinski trained throughout most of her pregnancy, making adjustments as she progressed. By the time she delivered, her training tools included a yoga mat and the pool.

“People were like, ‘You’re still working out?’” Mikinski said. “And I told them, ‘Yes, I’m getting ready for the Olympic Trials.”

Six weeks after she delivered, Mikinski took part in the trials. She didn’t make the team, but she didn’t much care.

“I made a bar and people couldn’t believe it. The crowd cheered more than any time I’ve ever had a great mark,” Mikinski said.

“It was such a significant moment — a ‘Beamonesque’ jump. … I was not at my top fitness, but the bottom line is, I showed up. The lesson is, sometimes you just need to show up and see what happens.”

Mikinski and her photographer husband decided to “show up” in Tucson full-time four years ago, relocating here from Manhattan, Kansas. The two had “no jobs,” Mikinski said, “but we sold our house and moved. And it worked out wonderfully.”

Mikinski has since found great success with her business, Gwen Mikinski Athletic Consulting. She channels her experiences as a Division I athlete and collegiate and Olympic coach into helping clients navigate the different phases of training and, when the time comes, helps them pick colleges that meet their academic and athletic needs. Her business took off when high school sports came to a screeching halt last spring because of the coronavirus pandemic.

“When sports were shut down, kids were looking for a way to continue to improve and develop in sports,” Mikinski said. “That gap created an opening for them and myself. We didn’t have high school sports at that point, so for kids that were really ambitious and wanted to make the gains, it really opened the door.”

Mikinski said she tries to give her clients the tools and opportunities she wishes she had when she was attending high school in her hometown of Flint, Michigan. Mikinski played basketball her freshman year, riding the bench most of the time. Eventually, her coach told her that while she wasn’t very good at basketball, she had a future in track. Mikinski’s athleticism was easy to see: she could dunk a basketball.

As a high school sophomore, Mikinski began to excel. She started attending college camps and made a dramatic improvement, taking her jump from 4 feet 10 inches to 5-10 in a year.

“I rode the wave from that point. I knew this was my meal ticket to college, but I didn’t really have the resources and networking to help me choose a college,” Mikinski said. “I was very blessed and fortunate in that I ended up at Kansas State University.”

It wasn’t just luck that landed her at Kansas State: Mikinski — then Gwen Wentland — set a still-standing Flint-area record of 5-11 1/4 as a high school senior. She also broke the Michigan state high jump record, clearing 6 feet.

Mikinski’s coach at Kansas State, Cliff Rovelto, was already known as one of the most prominent high jump coaches in the world. That reputation stood for decades, as Rovelto was responsible for coaching all three men that competed for the U.S. in high jump in the 2012 Olympic games.

She left college with four NCAA All-America certificates, four NCAA Runner-up trophies and two US National Championships to her name.

After Mikinski’s 6-5 jump and shortly before graduation, she was approached by sponsors wanting her to join their teams. She eventually went with Nike, spending 18 years on the shoe giant’s team.

“That was such a great education for me, as an athlete and as an individual,” Mikinski said. “Most of track is contested in Europe, so I had the opportunity for travel, exposure to other languages and culture and to other very high-level athletes.”

Mikinski had plans to start her own business even before she arrived in Tucson. She began training young athletes in 2001, after she left her coaching job at UC Irvine and joined her husband Rod back in Kansas.

“At that point, I knew that I wanted to share my knowledge and experience with athletes,” Mikinski said. “This was a new way to do it, and a way to do it more on my terms.”

In addition to her consulting business, Mikinski coaches at Salpointe Catholic High School, where her daughter, Paris — the baby she gave birth to before the 2004 Olympic Trials — is a junior. Paris plays soccer and is a standout track athlete, following in her mom’s footsteps; she has won a national championship in high jump.

Coincidentally, Paris Mikinski’s win in the USATF Youth Champs came in the same year that Gwen Mikinski won the Masters High Jump and set an American record for the event.

“And it’s really fulfilling. When I have kids come and tell me they signed with a college, I’m as happy as they are and I’m probably as happy as their parents are.”

While she’s ready for the pandemic to end, Mikinski said that she believes it’s had some unexpected benefits. She’s thriving in more ways than one: Mikinski was just named the head women’s track and field coach for the 2021 Pan American Games’ U20 team.

“I think there are some good things that will come out of this. It’s just sifting through the dirt and getting to the diamond.”

A year into the pandemic, Tucson's JCC helps people stay fit and safe, on-site and online

When the city shuttered gyms last March, the JCC began offering free, online fitness classes. The center has reopened with a multitude of safety measures and changes, but the classes live on.

Candice Pocase has been a member of the Eagles' wrestling, football, cross country, track and field and volleyball teams during her four years at the school.

Tucson native David Artzi took everything he learned as a young sports fan and transformed it into a Tucson-based business that allows him to work with NFL and NBA players on a daily basis.

The dragway's sponsorship program for the 2021 Junior Dragster season, which starts March 13, is believed to be the first in the NHRA,

'All we got, all we need': Catalina's High School's short-handed soccer team embraces underdog role

"We’re all we got in this crazy situation — the pandemic — but we’re all we need. When we lean into our brothers, our teammates, we're there."

“I feel almost bad. I have friends who own and manage gyms that are going under. Meanwhile, we’re coming up. But the community built this thing. We gradually kept climbing and we’re still climbing.”

Tucson cyclist Kathryn Bertine takes a stand with memoir about her accomplishments, activism

Kathryn Bertine made headlines years ago when she and several others ran a successful campaign to allow women to compete in the Tour de France.

'He's a legend': After 15 years, Rusty Wortman to step down as Wildcats' women's rugby coach

During his time as head coach of the Wildcats' women's rugby team, Rusty Wortman took the program from Division II to Division I, and has watched the sport grow exponentially at the UA and beyond.

Several sponsors were in attendance Saturday morning to meet their racers and cheer them on during the day's events.

Pima College's starting goalkeeper will lead the Aztecs in their spring season, which begins April 3 at Glendale Community College.

"It was pretty nice, I was happy to be able to pull myself together. And the season's going pretty well, actually."

Tucson’s Gwen Mikinski trains track and field athletes and, when the time comes, helps them find colleges that fit their academic and athletic needs.

Gwen Mikinski competed in the 2004 Olympic Trials shortly after giving birth to her daughter, Paris.