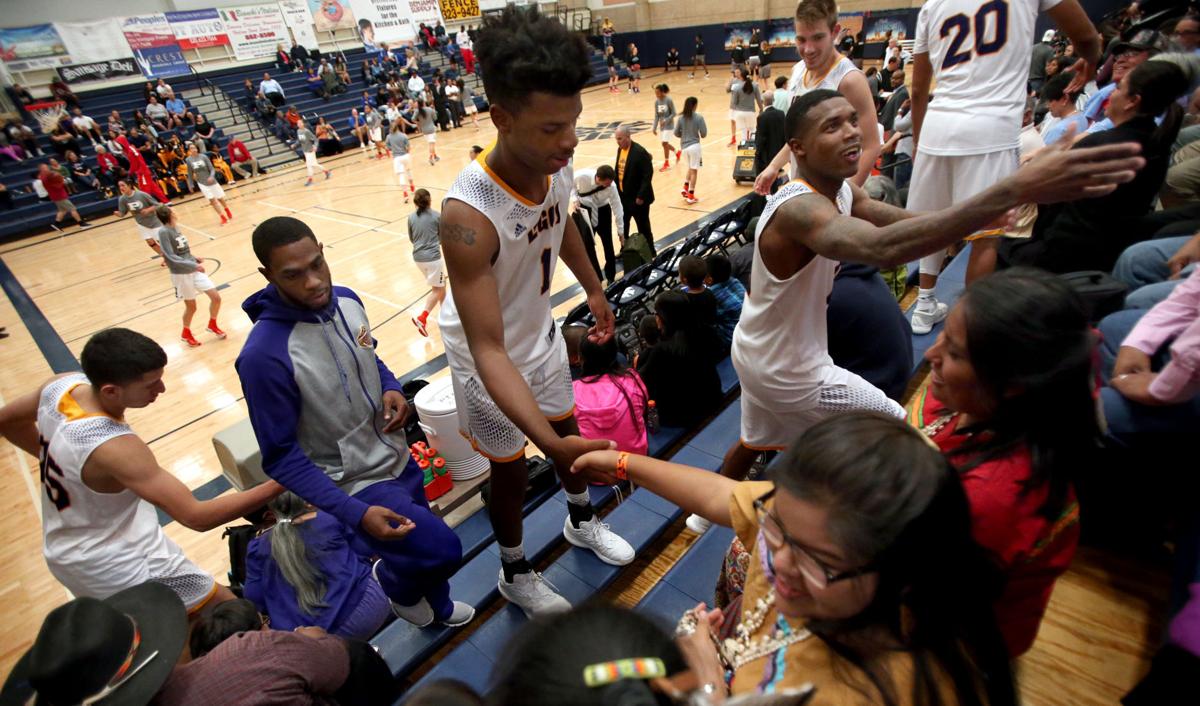 Tohono O’odham Community College players climb through the stands to shake hands with their fans, a team tradition, after their game against Salt Lake Community College last week. “To have this here, in the heart of O’odham land, it means a lot,” said April Ignacio of the Jegos team. 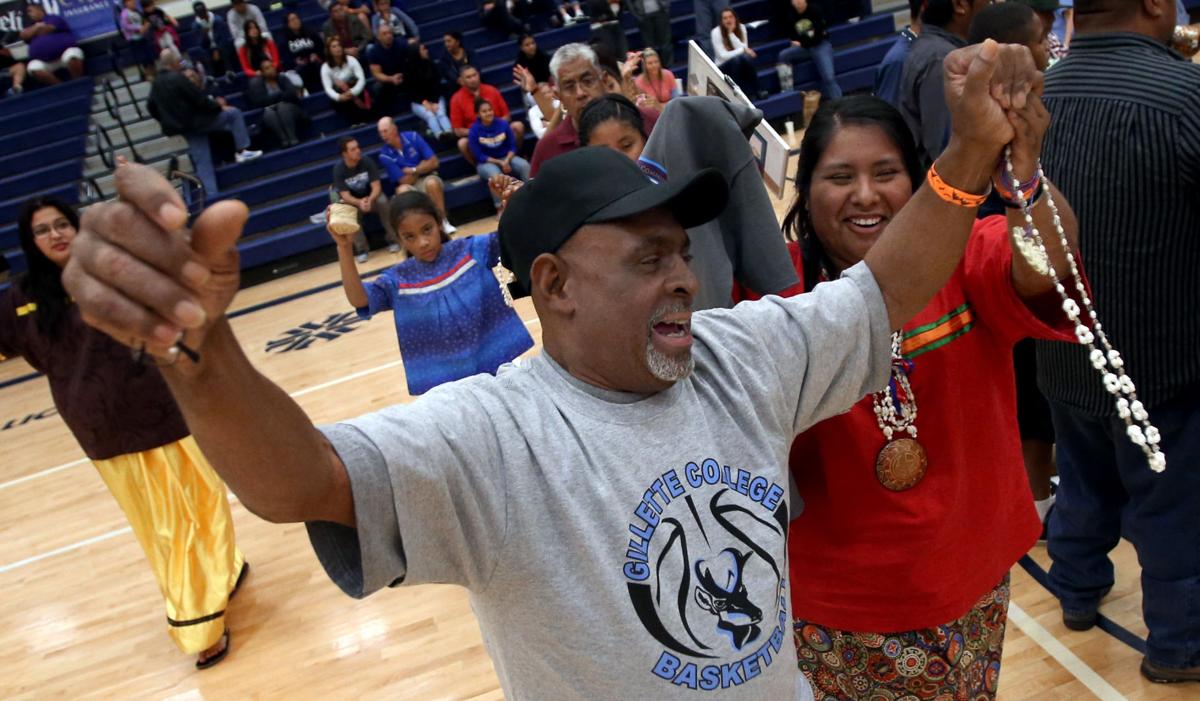 Gillette College fan and father of player Shy’Tyra Powell dances with Taylor Miguel of the No:ligk Traditional Singers and Basket Dancers during a giveaway dance at half time of the Gillette/Pima Community College game at the Native American Classic being held at Pima Community College. 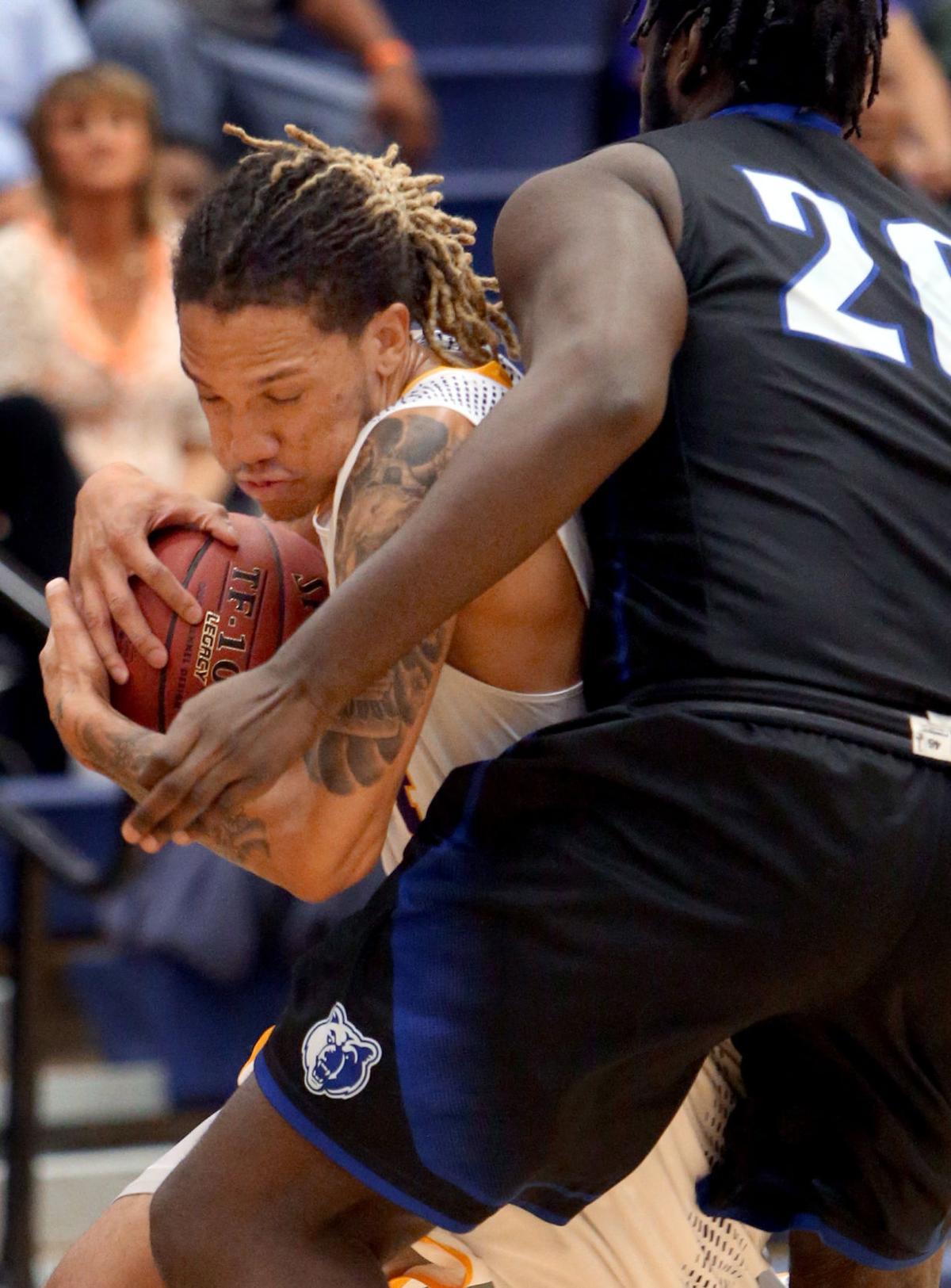 Taveon Jackson, left, and Tohono O’odham gave defending national champ Salt Lake a scare last week before falling by nine. The team has given a small community something to cheer about. 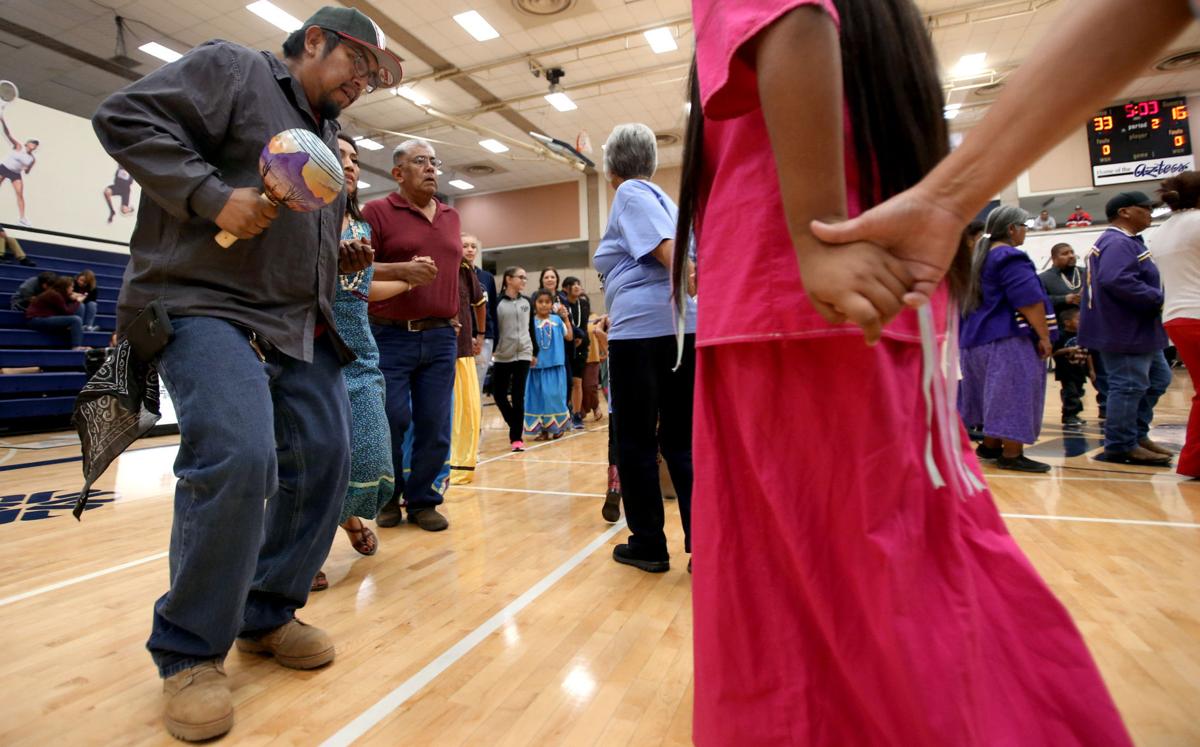 Jonathan Miguel of the No:ligk Traditional Singers and Basket Dancers the line of dancers and basketball fans weaving through the court during a giveaway dance at halftime of the Gillette College/Pima Community College game at the Native American Classic being held at Pima Community College.

They form a circle at midcourt, men and women, chanting and singing a beautiful rhythm that has sustained them for who knows how long? Centuries? Millennia? They are surrounded by a living, breathing rainbow of women, dancing and bobbing to the music, floor-length skirts of all colors pulsating to the beat, with ornate baskets, proudly held high, thrust into the air.

It is halftime of the 6 p.m. showdown at the Native American Classic basketball tournament between Tohono-O’odham Community College — whose head coach, Matt Vargas, conceptualized, scheduled and executed the event for the second straight year — and Salt Lake Community College, the defending national champions.

Off to the side, the Pima and Gillette College women’s basketball teams wait. They hold basketballs at their hips, swaying from one foot to the other.

Outside, volunteers cook frybread, and kids run and play.

This is everything Vargas dreamt of two years ago: A showcase for a people who don’t regularly have one, in a time of great strife for the Native American people, a time when the Dakota Access Pipeline protest is getting some of the attention that it deserves, a time when Standing Rock, North Dakota, has sparked a revolution.

A time when the often-voiceless have a unified voice.

“This is the thing about Indian people,” said April Ignacio, who helped put together a delegation of 87 Tohono-O’odham members that traveled to Standing Rock.

Struggles of a nation

It did not take much time for Vargas, who is not Native American, to understand the stark realities that the nation faced.

It may have taken one drive.

“From the moment you come down the hill into Sells, and you look out and see all the tagging, all the trash, the broken bottles, the homes with boards on the windows, you know there are issues,” Vargas said.

Before Vargas started the TOCC basketball program, he worked at the reservation’s rec center. He’d heard some local basketball players talk about going to play tournaments on “The Rez,” but he’d never been there before. He remembers taking the local children to Old Tucson for Halloween, and it was cold, “and you see that kids don’t have jackets.

When Vargas debuted the Jegos program, he was startled by what he saw: A community forming around him. The team began going up into the stands after games to shaking the fans’ hands – a tradition that stands a half-decade later — and they kept seeing the same faces.

This is a small, fragile community, and they needed something to cheer about.

“To have this here, in the heart of O’odham land, it means a lot,” Ignacio said. “To feel like we’re recognized, even though T-O is a very small college, and to bring the caliber of talent here? To see it for yourself? It’s pretty amazing.”

Vargas and his team now see it as a part of their responsibility to not only represent on the court, but in the community.

“It’s evident we’re playing for a nation of people,” said Thomas Wabaunsee, a freshman guard out of Rincon/University High School who is of Seneca-Cayuga descent. “They get behind us, support us like we’re family. When I signed and on recruiting trips, hanging around the community, seeing all the Jegos shirts, the kids knowing who we are — I felt a big impact. The kids in the community, they’re asking their parents to drive an hour and a half to watch us play. It makes us feel bigger than a basketball team.”

And even more than that.

On Thursday, Vargas paced the sidelines in a dark blazer and pants, barking at a referee who missed an obvious traveling violation, clapping hard after a TOCC basket.

Under his blazer, he wears a bright yellow shirt that reads:

It is a statement, and one you won’t see made by many — if any — college basketball coaches across the country.

It is a statement in support of the Sioux tribe, which has brought together protesters to fight the construction of the Dakota Access Pipeline, which would devastate the water supply of the Missouri and Mississippi Rivers.

“We’re talking about a day and age in which an owner of an NBA team can say a derogatory remark and within 30 days has to sell his team and is banished and it’s unbelievable, but we can drive tractors over sacred sites and take land away that we’ve already taken before, and violate treaties, and nothing,” Vargas said. “It’s just mind-boggling. And nobody gives a (crap). We’ve got time to go on Jimmy Kimmel, and shoot hoops before elections, but at the very least, couldn’t somebody say time out, stop working, everybody breathe and figure it out?

“The sentiment is that they’re all brothers and sisters, we all are, and this is finally something to where everyone has come together. It’s even brought in civil-rights leaders, journalists, an eclectic array of people. Because it’s wrong. It is wrong. It’s finally given them a rally cry.”

Ignacio said she was astounded by the trip to Standing Rock, watching more than 300 tribes represented in South Dakota.

“It changed me,” she said. “You go to Standing Rock, and everyone is relying on each other to survive. The group of 87 who went, we took care of each other. We knew each other from the rez. But not in this capacity, traveling 29 hours, and it was incredible to be a part of something to big. It was overwhelming.”

And, they hope, it leads to lasting change.

“We’re not talking gaming issues or money or mining rights,” Vargas said. “Now someone is coming in and telling you what you can and can’t do with your land. It doesn’t take a rocket scientist to figure out it’s the same company that’s had how many spills? How much water has been ruined? It’s a joke.”

This tournament, this small token, is exactly what Vargas envisioned.

His goal is lofty: to put on the best junior college tournament in the country. Considering the success of the ultra-popular Lakota Nations Invitational high school basketball tournament, considered one of the best of its kind in the country, Vargas believes it is attainable.

“It’s just about a tribal college having one of the best tournaments in the country,” he said.

And also, getting some respect.

That’s something that tribal college basketball programs constantly battle, and sometimes, Vargas said, deservedly so. Resources are permanently thin, and that can result in game cancellations, equipment issues, scheduling problems. Sometimes a team folds midseason, and now there’s a rep.

“A lot of people don’t give the tribal colleges a chance,” Vargas said. “When we made this tournament, we were about making it the best humanly possible, so we could help destroy that myth, destroy that stereotype.”

Last season, they held the tournament in conjunction with Glendale Community College and head coach Damon Lopez. This year, Vargas hoped to bring it closer, and seeing as TOCC doesn’t have a gym — it plays its home games 40 minutes away at “nearby” Baboquivari High School — he reached out to Pima athletic director Edgar Soto and coaches Brian Peabody and Todd Holthaus.

“We needed to bring it closer to home so that more of our fans could enjoy it,” Vargas said, simply.

And last Thursday, they do.

They are treated to terrific basketball, though the Jegos would ultimately fall to the defending national-champion Bruins, 76-67.

More importantly, they are treated to a tradition that you won’t see at any college hoops tournament across the country.

“It’s so cool to see the native song and dance,” Vargas said. “It’s inspiring. It’s moving. It’s special. A lot of people, like myself, before I’d gone to the nation, I’d never heard the song or seen the dance. It moves you.

“It’s something you never forget, and if more people understood how beautiful the culture is, how beautiful the T-O nation is — if they had an understanding of it, maybe then they’d be a little less inclined to destroy it?”

Next time Tucsonan Gabriel Ayala goes to North Dakota near the Missouri River, it will be to celebrate, not to protest.

Tohono O’odham Community College players climb through the stands to shake hands with their fans, a team tradition, after their game against Salt Lake Community College last week. “To have this here, in the heart of O’odham land, it means a lot,” said April Ignacio of the Jegos team.

Gillette College fan and father of player Shy’Tyra Powell dances with Taylor Miguel of the No:ligk Traditional Singers and Basket Dancers during a giveaway dance at half time of the Gillette/Pima Community College game at the Native American Classic being held at Pima Community College.

Taveon Jackson, left, and Tohono O’odham gave defending national champ Salt Lake a scare last week before falling by nine. The team has given a small community something to cheer about.

Jonathan Miguel of the No:ligk Traditional Singers and Basket Dancers the line of dancers and basketball fans weaving through the court during a giveaway dance at halftime of the Gillette College/Pima Community College game at the Native American Classic being held at Pima Community College.