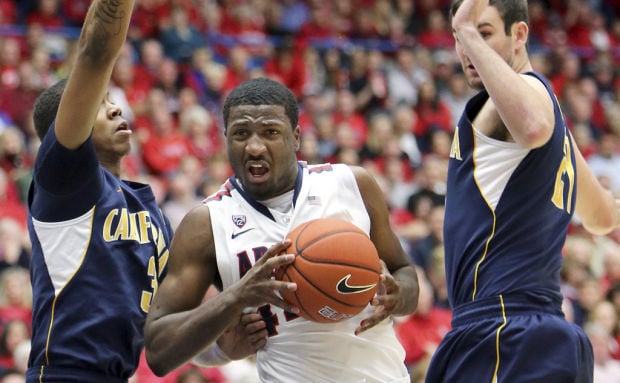 UA senior Solomon Hill gets squeezed by California's Tyrone Wallace, left and Jeff Powers. The Bears wore down Arizona with a zone defense. 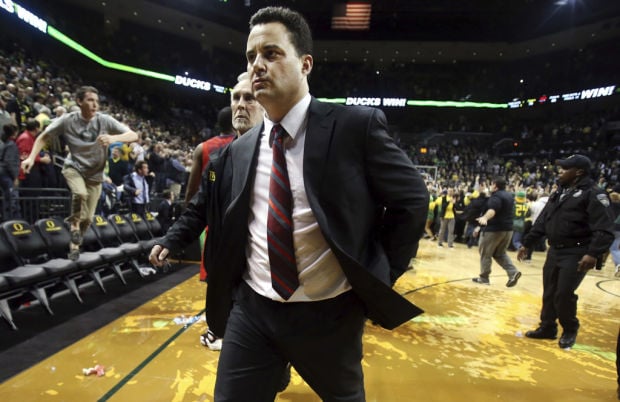 Thrill of victory, agony of defeat: Oregon fans rush the court in jubilation as UA coach Sean Miller leaves the floor as a loser for the first time this season.

Alex Bowman says "this weekend I'll be living a dream." But, c'mon, who dreams that they'll be racing in the NASCAR Nationwide Series at 19?

Who dreams that they'll be driving against Danica Patrick and Kurt Busch a year after graduating from Ironwood Ridge High School?

"This kid is different," says Alex's father, Tucson auto dealer Sean Bowman. "I've heard too many racing people, people with no money at stake, say that Alex is more than ready for this race."

It is safe to say that Saturday will be the Most Exciting Day of Alex Bowman's Young Life.

X-Games skiers are gripped by dramatics. Cliff divers live by the seat of their swimming trunks. But it's unlikely anyone in sports can fully grasp what Bowman is attempting to do Saturday, much of it at 200 mph, or more.

At noon Tucson time, he'll drive Turner Motorsports Car No. 30 at the Chicagoland Speedway in the NASCAR Nationwide Series. More than 75,000 are expected at the Speedway; ESPN2 will televise the race live.

Immediately after the race, Bowman and his father will take a golf cart to a nearby helicopter pad and be airlifted to a suburban airport. From there, in a private jet, they will fly 280 miles to Salem, Ind., hopeful they arrive at the Salem Speedway for the 4:15 p.m. (Tucson time) ARCA Kentuckiana Ford Fall Classic 200.

"We've got a window of about 80 minutes to 100 minutes to get from the Chicago race to the Indiana race," Sean Bowman says. "I don't know if anyone's done it, or attempted it, but we're committed to doing it."

This is the result of what happens when you win five of your first 15 races on the ARCA circuit, and soar to the top, ranked No. 1 in pole positions won and laps led. The NASCAR people notice. You get invited to take a coveted spot in the Nationwide Series' Dollar General 300. What's more, you get a spot in the Nationwide Series' OneMain Financial 200 two weeks later in Dover, Del.

"It's unusual for anyone with Alex's background to get this opportunity so quickly," Sean Bowman says. "He's only been in stock cars for basically a year and a half. It's the opportunity of a lifetime."

It's like the Yankees calling up a Class AA center fielder, a year out of high school, and putting him in the lineup against Justin Verlander.

An auto racer can't get his foot in the NASCAR door without one of two things: talent or a mix of talent and money. Bowman doesn't have much money; his earnings on the ARCA circuit essentially go for his travel and living expenses, and back to his sponsor, Cunningham Motorsports. On a good year - and Bowman is having one of the best - a championship-level ARCA driver might be fortunate to end the year with $20,000 in his pocket.

Put it this way: When he won July's Prairie Meadows 200 in Altoona, Iowa, Bowman and his five-man crew drove to Altoona from their base near Charlotte, N.C. They do not build up "points" at Marriott or Hilton or marquee hotels. They go the econo route.

Last week, when the NASCAR people gave Alex his first test of the car he will be driving Saturday, Bowman was so taken by the chance to fly, rather than drive to a racing destination, that he tweeted the news to his 1,283 followers.

"Alex has had a lot of inquiries from some of the big names in racing," his father says. "He might've been given this opportunity last year, after only eight races, but we felt he needed more experience, we felt he needed to be better prepared. In the last four or five months, he's been getting a lot of calls from top people in NASCAR."

Over the weekend, Allegiant Airlines agreed to be a partial sponsor for both of Bowman's Nationwide races. As Alex races, his father acts as a one-man management group, and nothing is higher on his list than finding significant corporate sponsorship.

"Talent is trumped by money in racing today, " Sean Bowman says. "If you can bring a sponsor with you, you're basically in. We don't have money. Alex is doing it on talent."

Bowman's busy Saturday - two races, two cities, one day - is tentative. If he does unusually well in Chicago, finishing in the top three or four, he will not make the post-race trip to Indiana and drive the ARCA 200.

But that's dreaming, right? Who finishes in the top three in a NASCAR debut?

More realistically, Bowman wants to race Saturday night in Indiana and finish the ARCA series (two October races remain). He is No. 4 in overall points, he is a strong favorite to be Rookie of the Year, and he has a chance to earn maybe $30,000 or more if he can maintain his yearly lead in poles won and laps led.

On Monday, Bowman debuted a YouTube video that featured a celebration of his ARCA victories. There were fireworks, confetti and happy people spraying champagne.

Not bad for Chapter 1 of what could be a long racing career.

UA senior Solomon Hill gets squeezed by California's Tyrone Wallace, left and Jeff Powers. The Bears wore down Arizona with a zone defense.

Thrill of victory, agony of defeat: Oregon fans rush the court in jubilation as UA coach Sean Miller leaves the floor as a loser for the first time this season.