Read Today's E-Edition
Share This
'No one is more prepared' for Territorial Cup than Trenton Bourguet, ASU's Marana-raised QB
Share this

If you want to play Territorial Cup bingo this week, add “How come Arizona never offered this guy?” to the card.

You’ll hear — or maybe even ask — the question on Friday, when the Arizona Wildcats host Trenton Bourguet and Arizona State at Arizona Stadium.

Bourguet, Arizona State’s quarterback, grew up in Marana as a Wildcats fan. Now, he’s in line to become the first Tucsonan to ever start a Territorial Cup game at quarterback for ASU.

“My kids grew up in the front row at Arizona Stadium for 14 years, so it’s a big deal,” said Toby Bourguet, Trenton’s father and former UA football season ticket holder.

So, how did a diehard UA fan end up playing quarterback for the rival Sun Devils? Well, it’s complicated.

Trenton Bourguet was an elementary-school student when he tagged along with his dad and brothers on a flag football trip to Dallas. The renowned Tucson Turf team won national championships in the 10U and 8U boys division.

Trenton Bourguet starred at Marana High School, setting the school passing record with 7,612 yards and 86 touchdowns in three years as a starter. The Star named Bourguet as the top player in the city entering his senior season, when he led the Tigers to an 8-3 record.

When he left Tucson for ASU, the odds of him returning to Tucson as a starting quarterback were slim.

Growing up, the Bourguet boys — Trenton, Coben and Treyson — had their own wing inside the family’s Marana home.

“They went to bed every night knowing they had the comfort of one another,” Toby Bourguet said. “I found it very important and comforting. … It was a way to keep us as a team. Our family, we’re a team, so that was the idea, and it worked out extremely well. To this day, those three boys are pretty close.”

Toby and his wife Vanessa preached two principles: A and E. Not the TV channel: Attitude and effort. Grounded in their Christian faith, the Bourguets had a “Represent” sign along with a photo of Jesus Christ above the door in the boys’ room.

“Every day, they stepped through that threshold — like Notre Dame football — and would walk out into the world and have a responsibility to work hard and show up and be present and give their best effort,” Toby Bourguet said. “That effort could mean failing at whatever it is they do that day, but I’ve always told them, ‘Don’t let it be because of lack of effort.’ If the effort is there, you win. It’s not a score thing, it’s an effort thing.”

Former Marana coach Louie Ramirez witnessed Trenton Bourguet’s attitude and effort up close. Shortly after he was hired in 2018, Ramirez called Bourguet into his office. He asked the quarterback which plays should be included in that year’s playbook.

“Right there on the spot, he drew up like six or seven plays that he wanted to make sure we kept in the offense,” Ramirez said. “I’ll never forget that moment because of how sharp he was, how intelligent, hard-working — you could look at him and tell he had a true love and passion for the game. I always knew Trenton had a genuine passion for the game of football.”

Unfortunately for Bourguet, work ethic doesn’t always jump out to Division I recruiters. Bourguet’s 5-foot-11-inch frame prevented him from receiving legitimate attention from top schools, even the one in his hometown.

Eager to learn from coach Herm Edwards, Bourguet enrolled at Arizona State and joined the football team as a walk-on. Coaching is a part of Bourguet’s post-playing plan.

“There’s no doubt in my mind that Trenton is gonna succeed at his next venture after he’s done playing,” Ramirez said.

Bourguet earned a scholarship shortly after the 2020 season, when he entered the game in the second half of ASU’s historic 70-7 win over the Wildcats. Brother Coben joined the Sun Devils as a wide receiver before the 2021. Treyson Bourguet, a former UA commit, just finished his first season at Western Michigan. He played in four games at quarterback.

Toby Bourguet has been soaking it all in from Marana.

“I just wake up every day and almost pinch myself because I’m so truly blessed,” he said.

Even after Trenton Bourguet earned a scholarship at ASU, he was still doubted.

A chain of events led to his big chance.

In May, ASU added Florida transfer Emory Jones with the expectation that he would start. Jones threw for 557 yards and two touchdowns over the Sun Devils’ first three games. The team went 1-2, and Edwards was fired after a Sept. 17 loss to Eastern Michigan.

Interim coach Shaun Aguano stuck with the struggling Jones until Oct. 8, when the quarterback was injured in a game against No. 20 Washington. Bourguet stepped in and threw three touchdown passes in a 45-38 upset win over the Huskies.

“I’ve prepared the last four years like I’m the starter,” Bourguet, who was unavailable for comment this week, said then. “You’re always a play away and I’ve been told that. … I just prepared like the starter the whole week and at the end of the day, we came out victorious against a very good Washington team. It was a lot of fun.”

Bourguet was named the starter for ASU’s following road game at Colorado, and completed 32 of 43 passes for 435 yards, three touchdowns and an interception in a 42-34 win over the Buffaloes.

ASU hasn’t won since. The Sun Devils enter Friday’s game with a 3-8 record, one game behind the 4-7 Wildcats.

Neither team will play in a bowl game this season, placing even more importance on the Territorial Cup. Arizona coach Jedd Fisch called the matchup a “plus-one” to an 11-game season.

But if the UA’s “It’s Personal” mantra applies to anyone this week, it’s the Tucsonan starting at quarterback for ASU.

“No one is more prepared to know this rivalry, know what this game means” than Bourguet, his father said. “Period. That’s a fact,” Toby Bourguet added.

“His life has led him to this point for a reason.”

Cats Stats: Territorial Cup matchup between Wildcats and Sun Devils, by the numbers

A look at 12 sets of numbers that could play a significant role in deciding the outcome of the Territorial Cup matchup between Arizona and ASU.

Arizona’s defense has made significant strides in recent weeks; plus: Shaun Aguano’s motivational tactics and the Wildcats’ Biletnikoff Award snubs.

Emotions will be running high vs. ASU; Wildcats need to keep theirs under control

A key Arizona player was ejected from last year’s Territorial Cup, and two Wildcats scuffled on the sideline last week. Can the Cats keep their cool against the Sun Devils this time?

Greg Hansen: Regardless of their records, UA-ASU rivalry is the Pac-12's best

For subscribers: The UA-ASU rivalry goes 24/7, all week, all month, all year.

Cats cap Maui Invitational with a mahalo — and a Thanksgiving meal

Tommy Lloyd invited all his staffers to bring along their families. Several players also have relatives tagging along.

A look at five storylines surrounding the Wildcats’ annual game against the Sun Devils on Friday at Arizona Stadium.

Notes and observations from warmups before the annual Territorial Cup matchup between the Wildcats and Sun Devils at Arizona Stadium (Friday, 1 p.m., FS1).

People can't get over Jude Bellingham’s performance against Senegal

People can't get over Jude Bellingham’s performance against Senegal 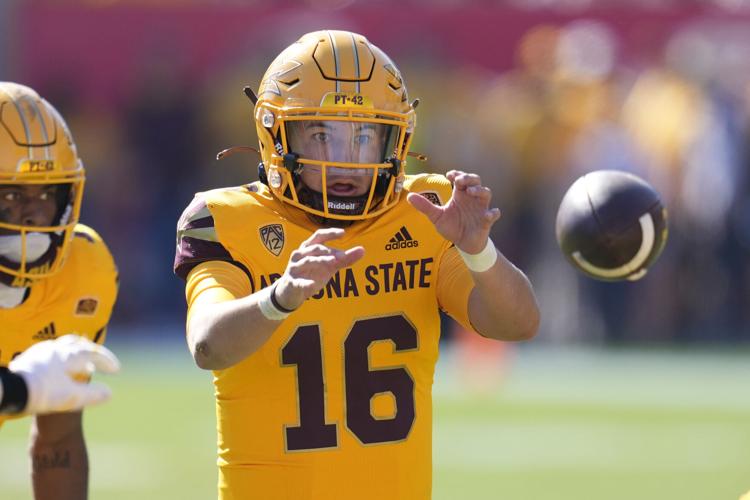 Arizona State quarterback Trenton Bourguet takes the snap during the first half of last week's game against Oregon State. Bourguet, a Marana High School graduate, has completed 108 of 155 passes for 1,114 yards and eight touchdowns during his junior season. 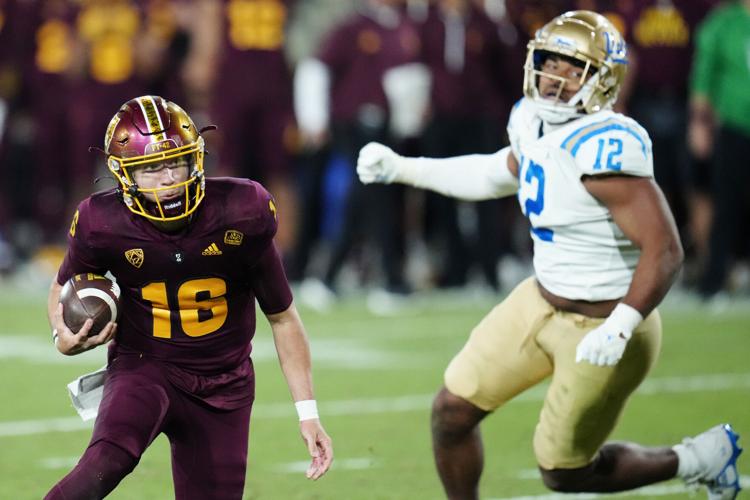 Arizona State quarterback Trenton Bourguet runs past UCLA defensive lineman Grayson Murphy during the second half of their Nov. 5 game.

Marana's Trenton Bourguet was one of Southern Arizona's top high-school football players during his career.