Read Today's E-Edition
Share This
Pac-12 Gambling Guide: There's money to be made on Wildcats, who are double-digit 'dogs vs. MSU
Share this
Jon Wilner The San Jose (Calif.) Mercury News

If the opening weekend of the 2022 season provided the Pac-12 with high-profile opportunities on big stages — opportunities since wasted — then Week 2 is something entirely different.

The Pac-12 has six non-conference matchups with Football Bowl Subdivision opponents, including showdowns with the Big Ten, Big 12 and SEC.

The conference is a double-digit underdog in four of the six and a one-point favorite in a fifth — a state of play that’s remarkable but wholly justified based on the matchups, locations, and recent performance. (The Pac-12 was 0-3 against Power Five opponents last week and 0-3 in bowl games last season.)

Arizona State and Washington State are substantial underdogs on the road against ranked opponents (Oklahoma State and Wisconsin), respectively.

Meanwhile, Arizona is a double-digit dog, at home, against Mississippi State. (The betting public doesn’t think much of the Wildcats’ victorious opener at San Diego State.)

So gloomy is the outlook for the conference that Colorado is a 17.5-point dog against a Mountain West opponent (Air Force).

Given all that, we wouldn’t be surprised if the lone conference game of the week, USC’s trip to Stanford, somehow ended with two losses for the Pac-12.

With so many big underdogs, there’s little to lose.

Washington State at No. 19 Wisconsin

Comment: The Badgers will be content to grind, as always. We expect a close game for three quarters, but will WSU’s defensive front hold up in the fourth? Not without more help than we expect from Cam Ward and the offense.

Comment: Which is worse: Losing by 25 points at home to TCU or being a 17.5-point underdog at Air Force? The correct answer, of course, is losing by more than 17.5 at Air Force. But we don’t think that will happen. Get ready for the JT Shrout show.

Comment: The last time UNLV coach Marcus Arroyo matched wits against Justin Wilcox, in 2019, the former was calling plays for Oregon and had a quarterback named Justin Herbert. And the Ducks managed all of 17 points.

Comment: The coaching advantage Stanford enjoyed for so many years in this rivalry no longer exists. Now, it’s all about the talent. The Cardinal has enough on offense to keep pace but not enough on defense to close the deal. Stanford covers; USC wins.

Arizona State at No. 11 Oklahoma State

Comment: We expect the Sun Devils to benefit immensely from quarterback Emory Jones’ experience in SEC road games. However, the Cowboys have too much of everything and should be in control early in the fourth quarter. Future intra-conference matchup?

Comment: The Beavers play USC, Stanford, Utah, Washington and Oregon in coming weeks but will face no better quarterback than FSU’s Jake Haener. If they contain the Bulldogs, it bodes well for the rest of the year. Very, very well.

Comment: Bulldogs coach Mike Leach is no stranger to night games in Tucson and will have a smart plan of attack for the improved Wildcats defense. Should be one of the best games of the day and worthy of the #Pac12AfterDark attention.

Five-star special:Arizona +10.5. It will take weeks for the point spreads to adjust to Arizona’s improvement. During that time, there’s money to be made, folks.

For Star subscribers: Many other ADs would've been overwhelmed by the mess Dave Heeke inherited when he arrived on campus in April 2017.

Cats Stats: Wildcats won third-down battle at SDSU; can they do it again vs. Bulldogs?

Arizona had a higher third-down percentage than San Diego State in the opener – a rare occurrence and one of the reasons the Wildcats prevailed.

"I think he’s a guy that can really shoot from the perimeter, he’s comfortable from midrange and finishing inside," Tommy Lloyd said.

"I think it’s a win-win for both of us. I am excited to make an impact on this new team that Adia has this year. I’m excited to also work on my game and expand."

The Wildcats looked like a bowl team in demolishing San Diego State.

The information below is provided for entertainment purposes only (unless it’s not). All times Pacific. Over/Under in parentheses.

Game-by-game picks: Expect Wildcats to exceed expectations, pull off a few upsets in 2022

We break down the Wildcats' 2022 schedule, one game at a time.

The Utes aren’t out of the CFP race but must do what no Pac-12 team has done before.

Pac-12 Hotline: Our vision for the future of the conference — and college football

More than 41,000 tickets were sold as of Thursday afternoon. Capacity at Arizona Stadium is now 50,600.

The conference continued its perfect record against FCS opponents.

Betting favorites have covered in 11 of the 15 games — a whopping 73.3% — against major college competition.

The next step in UCLA’s planned move into the Big Ten is officially on the calendar. 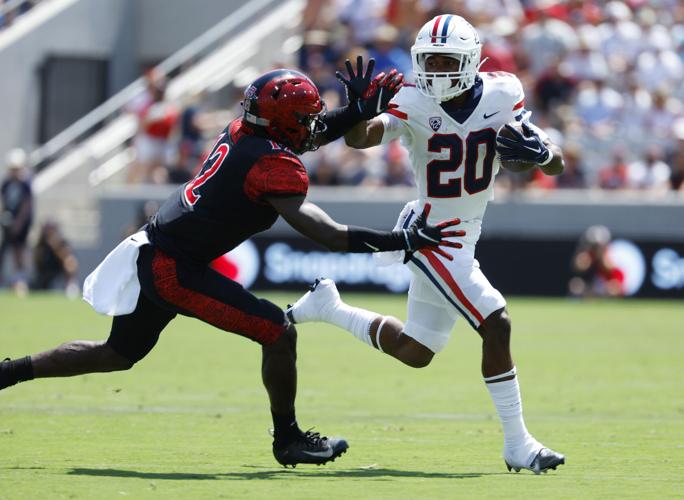 Running back Rayshon “Speedy’ Luke and the Wildcats pulled off the biggest Pac-12 upset in Week 1, thumping San Diego State at Snapdragon Stadium. 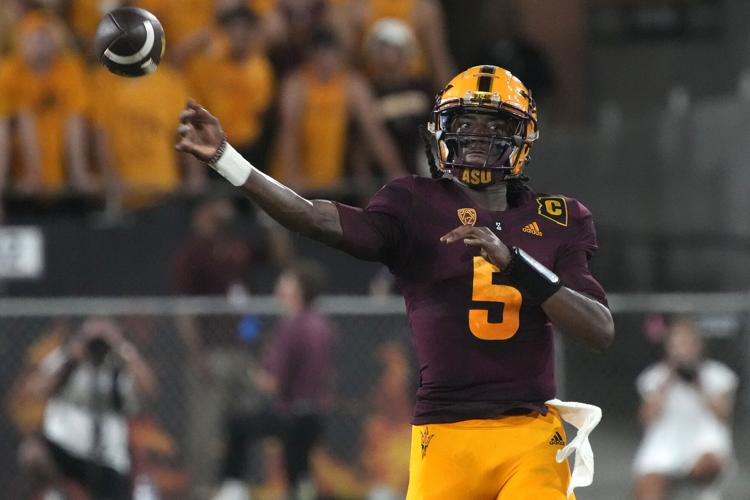 Emory Jones and Arizona State are 11.5-point underdogs against No. 11 Oklahoma State on Saturday.