Reviewing the best and the worst of Week One …

Theme of the Week I: Salvaging a tie

According to the Associated Press, the Pac-12 became the first Power Five conference to lose six games on the opening weekend since the SEC in 2016.

What’s more, the six losses to unranked opponents were the second most in any week for a Power Five league since 2000, with only the Big Ten having more (seven in 2018).

But in our view, UCLA’s victory over No. 16 LSU — in the Rose Bowl, in primetime — brought the conference some measure of respectability.

The fans aren’t so sure.

A Hotline poll on Twitter asked fans to assess the conference’s performance, with three options:

• Tie: UCLA’s win and the losses cancel each other out

We received about 1,600 votes in the first few hours, with 56% of the votes calling the weekend a failure, 28% declaring it a wash and 16% believing it was a success.

Theme of the Week II: The North collapses

The division was 1-5 overall, with some gruesome performances under pressure.

Washington was outscored 10-0 by Montana in the final quarter of a shocking 13-7 home loss.

And Washington State was outscored 15-3 by Utah State in the fourth quarter in a 26-23 loss.

Theme of the Week III: Could have been worse

Unimpressive as the Pac-12’s collective performance might have been, it fared better than the ACC.

Its three ranked teams (Clemson, North Carolina and Miami) all lost, leaving the conference on the outside of the playoff race after just one week.

Compared that to the Pac-12, where four of five ranked teams remain undefeated: Oregon, USC, Arizona State and Utah.

Plus, Duke lost to Charlotte and Georgia Tech lost to Northern Illinois

Team of the Week: UCLA

The Bruins were the more confident, aggressive and physical team in their 38-27 victory over the 2019 national champions.

Yes, they held a competitive advantage in having played the week before. But it was impressive nonetheless.

UCLA outgained the Tigers by 100 yards and dominated the line of scrimmage (223 yards on the ground).

It was more than Chip Kelly’s signature win in Westwood.

It was a signal that the Bruins just might be on their way back to relevance nationally — a development that would greatly aid the Pac-12 as it attempts to increase the value of its football product.

UCLA’s national brand has the potential to affect negotiations with interested media companies, if Kelly can keep it rolling.

The No. 11 Ducks were pushed to the limit by an unranked Mountain West opponent that led 24-21 midway through the fourth quarter.

An Oregon loss would have been cataclysmic for the Pac-12’s playoff hopes. But the defense tightened down the stretch, and quarterback Anthony Brown, who was not sharp through the air, scored the winning touchdowns on a nifty 30-yard run.

The All-American defensive end rolled his ankle in the first half, and momentum immediately shifted to Fresno State.

He did not return to the game and wore a walking boot on the sideline, but X-rays were negative.

His status for the Ohio State showdown on Saturday is uncertain. The Ducks have a massive challenge awaiting. If Thibodeaux is unavailable, their prospects for victory are somewhere south of slim.

Loss of the Week: Washington

The Huskies not became the first ranked team (in any conference) to lose to an FCS opponent in five years, they did so by blowing a 7-3 lead early in the fourth quarter.

We have seen Pac-12 outcomes that stretched the imagination. That was on the short list of mind-benders

If it’s not the worst loss in school history, it’s in the conversation.

Dulcich produced the biggest play in the most important game.

His 75-yard touchdown came seconds after LSU’s opening score, did wonders for UCLA’s confidence and softened up LSU’s defense for the Bruins’ running game.

London is the best offensive player in the conference, regardless of position. But Dulcich is in the top five.

The transfer from Baylor completed 19-of-27 passes and threw two touchdowns.

Sure, it came against an FCS opponent (Weber State) — and with a long, disruptive weather delay. But Brewer gave every indication he’s equipped to lead Utah’s charge for the division title.

Also, none of the other first-year starters across the conference were remotely worthy of the honor.

Trailing by two points at Purdue midway through the fourth quarter, the Beavers faced fourth-and-2 at their own 37.

Smith went for the first down with a low-percentage downfield pass from Chance Nolan to Tyjon Lindsey that fell incomplete.

Purdue took over and was in the end zone six plays later to take a 23-14 lead.

We didn’t mind the fourth-down gamble so much as the risk level of play itself.

There’s plenty of competition for this, um, honor. But the Wildcats were selected because of the stakes (debut for coach Jedd Fisch), the winnable nature of the game and the number of bungled chances in the 24-16 loss to BYU.

They missed two field goals, from 31 and 44 yards, and failed to score a touchdown on four trips into the Red Zone.

But that doesn’t tell the entire, sordid story.

On seven occasions, the Wildcats had first down on or inside the BYU 35. Yet they turned the opportunities into just one touchdown and two field goals.

Months ago, Shaw publicly criticized Fox programming officials (via The Athletic) over the 9 a.m. kickoff time (Pacific) for the duel with Kansas State in Arlington.

Whether Shaw suspected his team would be overmatched or whether he spoke a problem into existence — or neither — we will never know.

But the Cardinal was outplayed from the start and non-existent offensively for the entire 60 minutes.

It was an embarrassing performance all around for the Cardinal, right down to the inexplicable lack of urgency offensively in the final minutes.

Down 24-0, the Cardinal snapped the ball with four seconds on the play clock and, after a touchdown, did not attempt a two-point conversion.

The Trojans didn’t put away San Jose State until the fourth quarter, but they were never in jeopardy of losing.

The 30-7 win was all the more impressive when you consider the Spartans are the reigning Mountain West champs, possess a Pac-12-caliber quarterback (Nick Starkel) and, not to be overlooked, had played the week before.

As we saw with UCLA (against LSU) and with Fresno State (against Oregon), playing on Week Zero creates a competitive edge in Week One.

The Bears scored on their opening possessions against Nevada, with drives of 72 and 63 yards and a heavy reliance on the running game.

But once the second quarter arrived, they seemed to change focus to the aerial game and were never the same.

Cal managed a single field goal for the final 45 minutes.

For 50 minutes, the Cougars kept Utah State out of the end zone and allowed just 293 total yards.

In the final 10 minutes, they wilted.

The result was a stunning win for a Mountain West team that went 1-5 last year and uses rotating quarterbacks.

And it was an awful loss for a Pac-12 program that has dropped four in a row since it opened the 2020 season with a win at Oregon State.

The Pac-12 desperately needs big wins … wins over blue bloods … wins that resonate nationally … wins that change the narrative of a conference left behind.

Pac-12 Hotline: Our picks for every game, both divisions and the conference championship

For the first time in years, the South will rule the conference.

Pac-12 Hotline: Ranking the impact newcomers for all 12 programs

The Hotline assessed the impact of new Pac-12 players and assistant coaches; there’s a clear No. 1 in the conference.

The bowl projections will be a weekly fixture on the Hotline, allowing us to place current performance in context with postseason eligibility.

Three reputation-shaping games against marquee programs from the SEC and Big Ten make Saturday the biggest day of the biggest year in Pac-12 football history.

Arizona football adds another opponent to its future schedule. 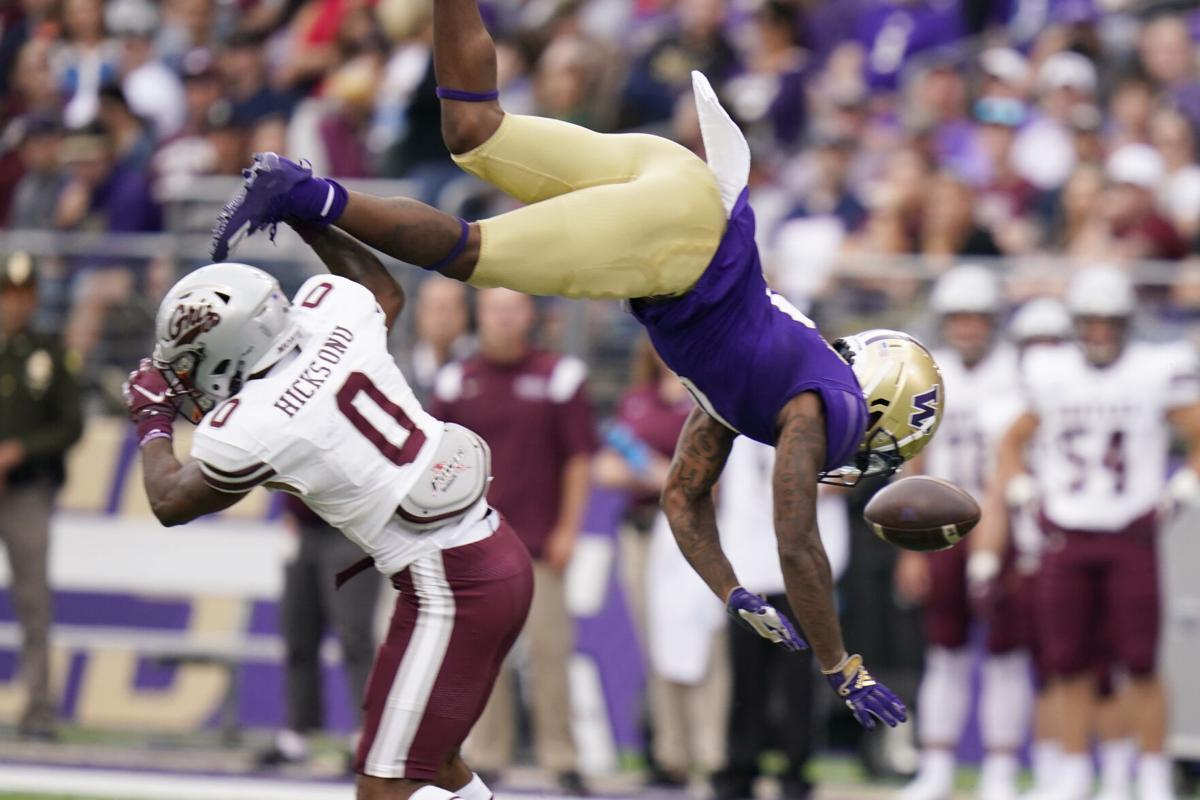 Montana's Omar Hicks Onu, left, upends and breaks up a pass intended for Washington's Giles Jackson in the first half Saturday. The Huskies' loss was the low point of one of the Pac-12's worst non-conference weekends ever. 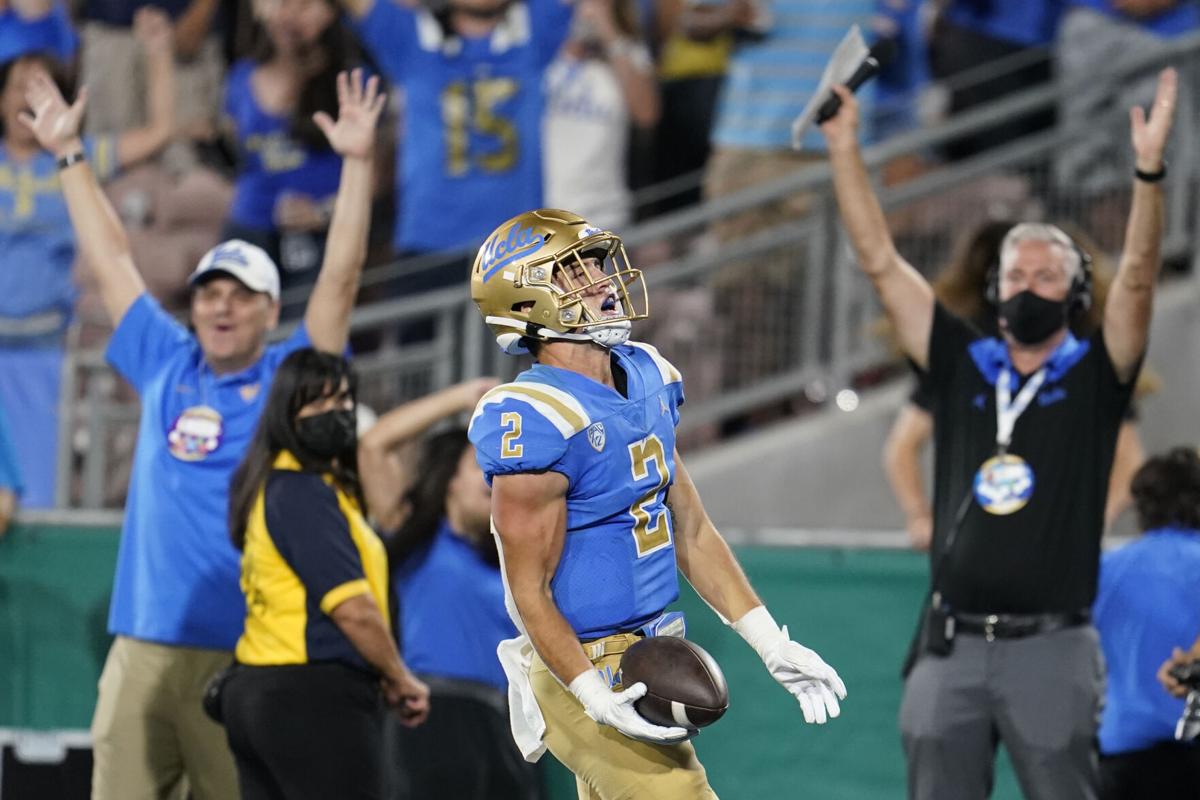 UCLA wide receiver Kyle Philips scores against LSU during the second half of the Bruins' convincing home win over the 2019 national champions. 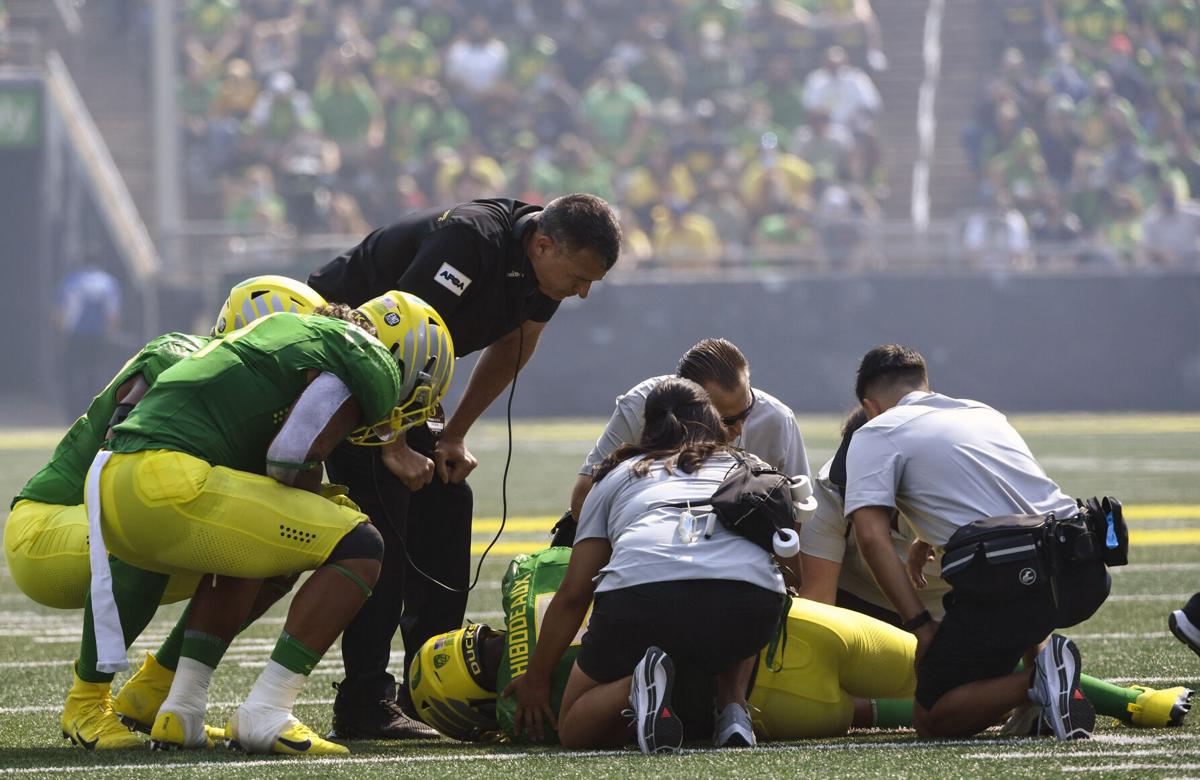 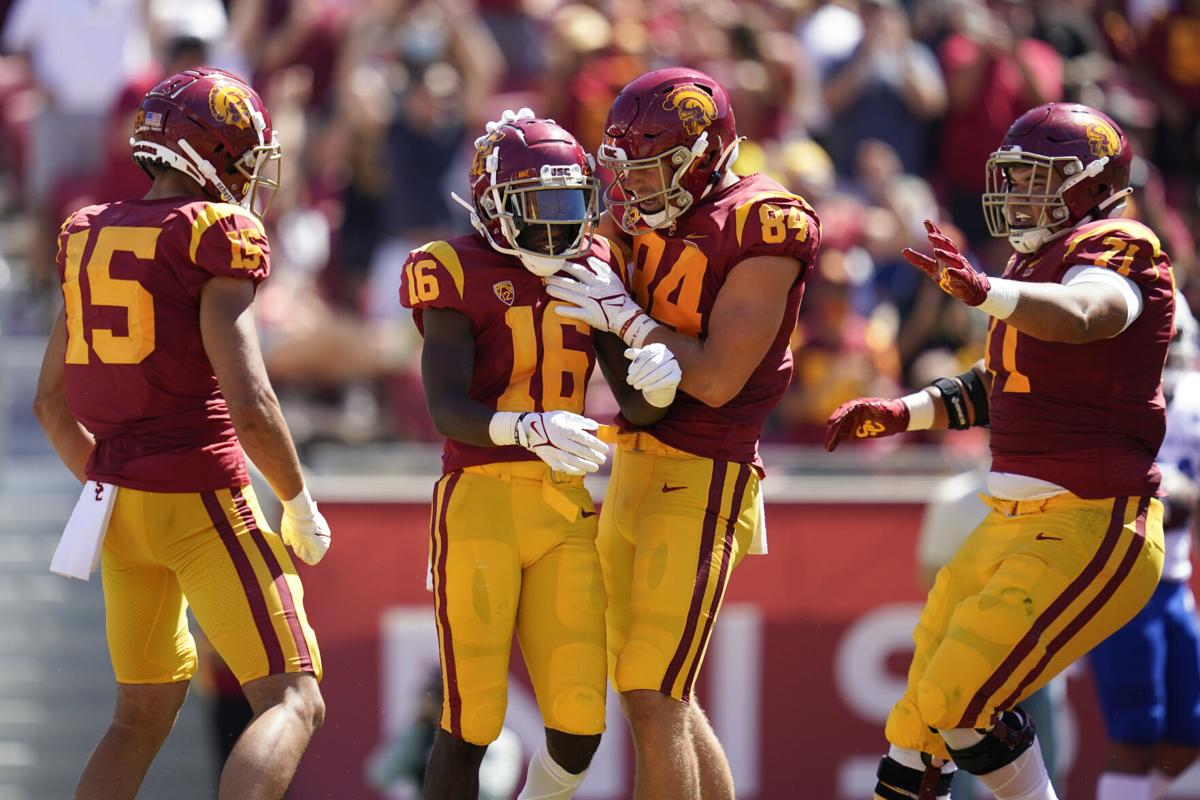 USC wide receiver Tahj Washington (16) celebrates with tight end Erik Krommenhoek (84) after catching a pass in the end zone for a touchdown during the first half of Saturday's home win over San Jose State.