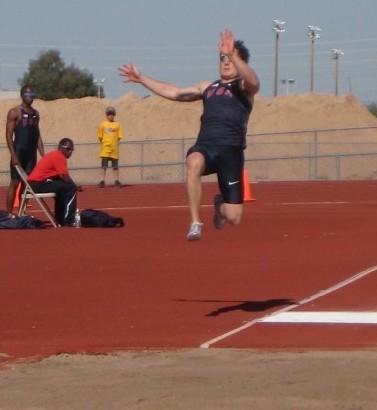 Tucsonan Tanner Gers, who is blind, attempts the long jump May 19 at the Desert Challenge Games in Mesa. Gers will likely be named to the US Paralympic Team in July. (Photo by Tray Gers). 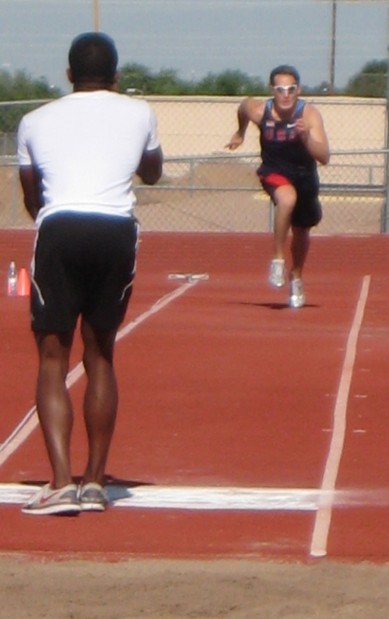 Tucsonan Tanner Gers, who is blind, attempts the long jump May 19 at the Desert Challenge Games in Mesa. Gers will likely be named to the US Paralympic Team in July.

You can get to London from Tucson by bus. Don't believe me? Ask Tanner Gers, who, for months last year, spent his Saturdays waking up an hour before the sun rose and riding shotgun in his wife's car toward the Greyhound station downtown.

Rosa would escort her husband, and his track gear, onto a morning bus bound for Mesa, and say goodbye.

With help from the bus workers, he'd exit at the right stop two hours later in Mesa, where he was picked up by and driven to Arizona Disabled Sports.

Then the Sabino High School and Pima College graduate would do the whole thing again, in reverse, taking an extra bus to get back to his house by 3 p.m.

If you've ever met the inspired and inspiring Gers, though, you knew that wouldn't slow him down.

"When he first started travelling on Greyhound, I was really nervous that he would get run over," Rosa said, with a nervous chuckle. "God has always had him by his hand."

On March 28, 2004, Gers was in a single-car crash while driving toward his parents' house in Vail. His car rolled down an embankment.

A tree crashed through the windshield and impaled his face.

He lost vision in his left eye immediately; 19 days later, the right eye went, too, the result of brain swelling.

He suffered brain and spinal cord injuries. He said he "shattered his face." His left cheek, nose and jaw are now reinforced with plates and implants.

When I first met Gers three years ago, he was playing "beep baseball," a sport in which he's since been named MVP.

He told me, then, about the joy of pounding his old baseball glove after the accident, and the thrill he had returning to athletics. They injected fun, and normalcy, back into his life.

Gers, now 29, played varsity football, wrestling and lacrosse in high school. He pole-vaulted to weasel out of sprinting.

Now, 14 months after starting the sport, he's among America's best.

The U.S. Paralympic team will be announced July 2, immediately after the three-day trials in Indianapolis.

Gers figures to be on it.

He's already met the long jump A-standard of 5.93 meters and will sprint in London if he can reach minimum requirements for the 100 and 200 meters at trials.

"It would be a complete game-changer," he said. "I'd be living the dream."

Gers - a senior at the UA - wasn't invited to live at the Olympic Training Center in Chula Vista, Calif., like other star athletes.

He moved near San Diego anyway in May, with help from Tucson-area donors, including Jim Click, plus friends and family.

He trains at the OTC five days a week and was recently invited to move in, albeit temporarily.

It's the longest he's ever been apart from his wife, a schoolteacher.

In the long jump, Gers listens to a cadence from a "jump caller" as he nears the lift-off line. In sprints, he runs alongside his guide, Jay Slade, who is tethered with a resistance band they keep around their fingers. He gives Gers verbal cues to turn.

Slade is his fifth guide in Gers' eight career meets, and by far the best.

Gers tried to find guides on Craigslist before, but they're not fast enough.

His coach, Willie Caldwell of Tucson's Mobility Fitness Institute, said Gers could do the same to athletes in England.

He called Gers, who in November won long jump gold at the Parapan American Games, "one of the most explosive athletes I've ever been around."

Gers' work ethic, Caldwell said, " is going to put him on the podium."

That's the hope - though making the team is reward itself.

"That's what I've been working so hard for," Gers said. "That's why my wife has been taking me out to the track and taking me to the gym and getting the brunt of my frustrations sometimes.

"It would just mean so much to me."

Tanner Gers receives 100 percent of all donations made in his name to the United States Association of Blind Athletes.

You can donate by putting his name in the comments box of the "Donate" page on www.usaba.org, or by sending a check to the USABA at 1 Olympic Plaza, Colorado Springs, Colo., 80909.

The proceeds go toward Gers' training for the Paralympics.

The Star columnist check in on how college basketball has become all about transfers, whether Bob Baffert is guilty of doping his horses and why the Pac-12's softball excellence is a testament to the father of the sport, Mike Candrea.

Greg Hansen: To keep up with ASU, Wildcats need a new golf facility; but where?

The UA continues to explore relocation of its faraway golf facility, but the exploration has essentially been reduced to a two-course showdown between the Tucson Country Club and the Randolph Golf Complex.

Maya Nnaji becomes the highest-rated recruit to ever commit to the Wildcats.

The Phoenix five-star point guard will announce on ESPN's "SportsCenter."

The 3.5 GPAs on the Stanford women’s lacrosse team don’t carry as much weight as finding new streams of revenue that’ll help pay for those $340,000-a-year outside linebacker coaches.

With the commitment of Paris guard Adama Bal on Tuesday, the Wildcats not only received a versatile 6-foot-6-inch wing with point guard skills but also added their fourth French-speaking player on their tentative 2021-22 roster.

Adama Bal selected the UA over offers from Colorado, Cincinnati, Georgia, Marquette and St. Mary's, among others.

'He is the new prototype for a sports commissioner': Pac-12 hires MGM's George Kliavkoff

At Tucson's Showtime Cards, business is booming thanks to a 'perfect storm of events'

It's 2021, the trading card market is booming, and George Mares is the belle of the ball.

The Lancers face Gilbert Mesquite on Tuesday with a trip to the Division II state championship at stake.

Tucsonan Tanner Gers, who is blind, attempts the long jump May 19 at the Desert Challenge Games in Mesa. Gers will likely be named to the US Paralympic Team in July. (Photo by Tray Gers).

Tucsonan Tanner Gers, who is blind, attempts the long jump May 19 at the Desert Challenge Games in Mesa. Gers will likely be named to the US Paralympic Team in July.