Jaely John tucked a loose strand of her mother’s red hair back into place with a pearl-capped bobby pin. With everything perfect, the pair linked arms and began their walk down the aisle toward Annie Powers’ soon-to-be husband.

As an instrumental version of the Goo Goo Dolls’ “Iris” played overhead, Dustin Powers smiled broadly at the sight of his bride, glowing in white.

The couple exchanged handwritten vows, their parents flanking each side, and sealed the union with a kiss.

The wedding attendees — all 3,750 of them — roared. Red hockey pucks floated down onto the Tucson Arena ice.

The newlyweds — wearing their custom-made “Bride” and “Groom” Roadrunners jerseys — walked off the ice and slipped away for a few minutes together before returning to greet family and friends.

There was, after all, a game to watch.

To understand why Dustin and Annie Powers got married during intermission of Friday night’s Roadrunners-Colorado Eagles game at Tucson Arena, you must first understand how they came to become two of the Tucson team’s biggest fans.

Annie Powers’ father, Mark Blair, began taking her to hockey games when she was 2 years old. They would make the 45-minute trip together from their home in Longmont, Colorado, to Denver, where the minor-league Colorado Flames played.

“We were always close, but we didn’t have a real connection,” Blair said.

Remembering the bond they shared over hockey, father and daughter bought tickets to watch the minor-league Seattle Thunderbirds games 13 years ago. They attended a few games a season at first, then upgraded to half-season tickets and then full-season seats.

Blair retired in 2015 and moved to Tucson, and his daughter followed a year later. They initially expected to buy Arizona Coyotes season tickets, but soon found the drive to Glendale to be too long.

“It wasn’t three or four months after that they announced that they purchased an AHL affiliate and were bringing them to Tucson,” Blair said. “We signed up as soon as they said they were going to have a team and we were in the first group to get season tickets.”

How serious were they about the Roadrunners? When both Annie Powers and Blair realized they would be out of town for the team’s first seat-selection day, they enlisted a family friend to take their place. Annie Powers’ daughter’s godfather laced up his tennis shoes and made a dash for what would become their season tickets in Section 122 — right on the ice and next to the penalty box.

Three years later, their love of hockey would change both their lives again.

An elementary school teacher, Annie Powers is naturally a people person. And over the years, she’s befriended the other fans that sit in Section 122. At the start of the 2018-19 season, Dustin Powers joined the group.

Dustin, a small-business owner, received a pair of season tickets from his mother for his birthday. Weeks later, his mother died.

The tickets were “kind of like her last gift to me,” he said, “and that’s where I met Annie.”

Dustin Powers sat behind Annie and her father for the whole 2018-19 season, working up the nerve to ask for her number at the final game. A week later, the two met for hamburgers. The next week, they went to a comedy club, and from there, Annie Powers said she was hooked.

“That was it,” Annie Powers said. “From that moment forward, I knew that we were going to be together.”

Their budding relationship was a surprise to Blair, who says now that he couldn’t be happier for them.

“To meet at hockey, a passion that she and I share so much and that’s so rooted in her, and to meet someone there that shares that same passion … I think that’s really special,” he said.

Six months after their first date, Dustin Powers proposed on his birthday. Five days later, Dustin and Annie made their debut as a couple at the Roadrunners’ 2019 home opener. The two had kept their relationship quiet over the summer, hoping to surprise their hockey friends at the start of the next season. The couple played it cool during the start of the Roadrunners’ home opener, acting like the friends they’d been at the end of the previous season.

Dustin Powers’ seatmate, knowing about his feelings for the girl in the row in front of them, found out before the game that she was engaged. His heart sunk.

He eventually asked Annie when they were going to meet her fiancé; she responded by putting her hand on Dustin’s knee.

Team president: ‘I wish they were all like this’

Dustin and Annie surprised their hockey friends again last week, when they told them of their planned on-ice wedding. They had planned to get married in March on Mount Lemmon, but the Roadrunners had other plans.

The team’s front office had been considering a contest where the prize would be an on-ice wedding. Team president Bob Hoffman said once he learned there was a problem with the Powers’ original wedding site, offering up the arena seemed obvious, calling their union “almost fairy tale.”

“They met at a game, they’ve been a part of the family for so long,” Hoffman said.

Hoffman had hosted weddings before, but said Friday was the first time he was invested emotionally. He didn’t know the other two couples, who won the weddings through radio promotions and contests.

“This is really more true to the heart, because Annie and her father have been season ticket holders since Day 1, and Dustin’s been there as well throughout,” Hoffman said. “I wish they were all like this, to be honest.”

Dustin and Annie will continue celebrating their marriage on March 14, when they hold a reception inside the season-ticket holder area during the Roadrunners’ home game against the Texas Stars. (It’s Conor Garland bobblehead night).

They have friends traveling from across the country, including people who sat near Annie and her dad during their Seattle Thunderbirds days. Annie said she’s looking forward to introducing Dustin to the rest of her extended hockey family.

There’s no questioning the couple’s dedication to the sport. The newlyweds spent the moments after their wedding in the corner of the rink, posing for photos and receiving well wishes from friends and neighbors. In the middle of the chaos, with hockey sticks clattering against the boards and thousands of people cheering, Dustin and Annie shared a moment. They smiled at each other knowingly before turning their attention back to the game.

Welcome to the family

Annie Powers’s 14-year-old daughter, Jaely, was in her element before and after the ceremony, shoring up details so that her mother could enjoy the evening and keeping her grandmother company.

Blair has similarly welcomed Dustin into the family. During their first season attending Roadrunners games, other fans often assumed Blair was Annie’s husband, which quickly got old. To solve the problem, the pair ordered custom Roadrunners jerseys with “Dad” and “Daughter” written across the backs in large white letters.

After Dustin Powers asked Annie to marry him, Blair bought him his own customized jersey with the words “Son-in-Law” on the back.

Blair’s generosity has its limits, however: He has given away his daughter, but says he won’t part with his seat on the glass, which he calls “the best in the house.” And so Dustin Powers will remain one row behind his new wife and father-in-law, three hockey fans bonded by their love of the Roadrunners and each other.

Aaron Gordon's 24 points not enough in Orlando's loss to Miami.

No. 11 Oregon loses to Stanford but remains in first place in the conference.

Seen and heard from Pullman, where Arizona has pulled off a weekend sweep.

Joshua Hilaire turned himself into police two days after the May 6, 2018 death of his 18-year-old girlfriend, Rosaura Hernandez. Family members found Hernandez dead in the midtown apartment the couple shared.

From fitness classes to networking: How UA athletics is working to improve diversity and inclusion

The University of Arizona's athletics department is taking big steps to make employee diversity, inclusion and engagement a priority.

Colter Lee, 11,  is the oldest son of former Pro Rodeo Cowboys Association team roping legend Colter Todd, who retired from the circuit in 2008. 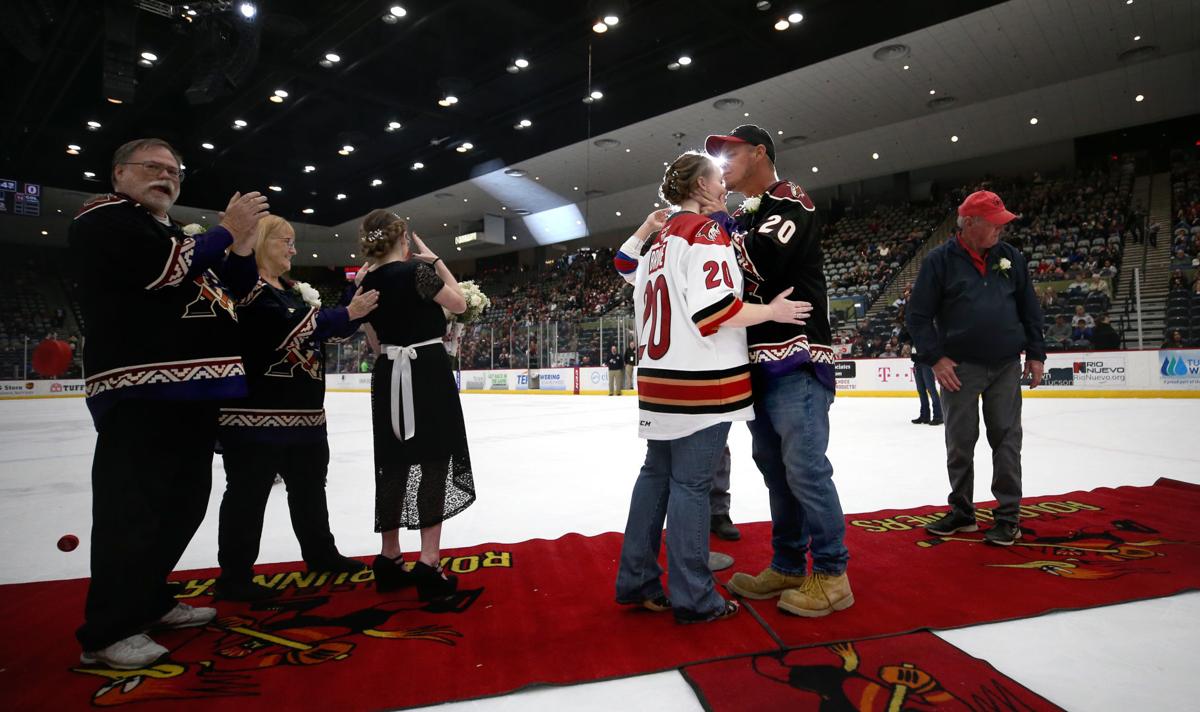 Annie and Dustin Powers kiss after getting married on the TCC ice during the first period intermission of the Roadrunners’ game against Colorado on Friday night. 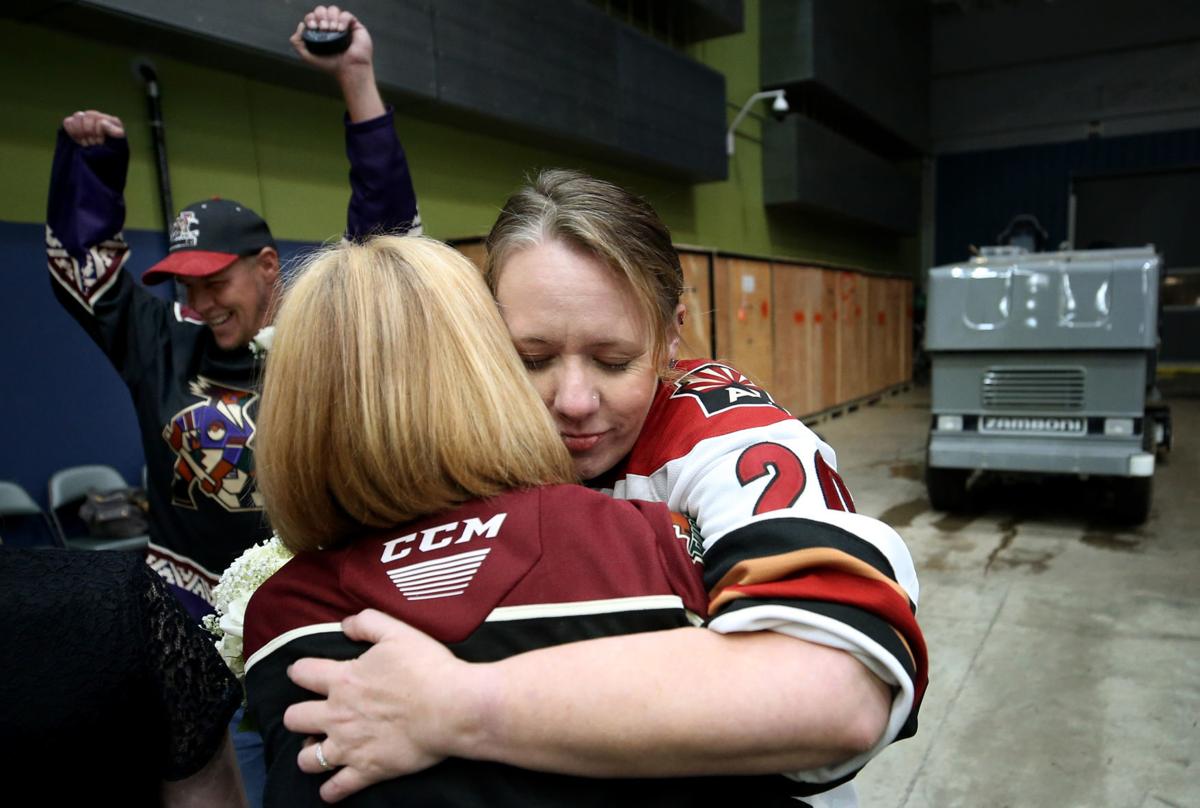 While Dustin Powers celebrates, his new wife Annie Powers hugs her mother, Sharon Blair, after the newlyweds tied the knot on the ice between periods of the Roadrunners game. 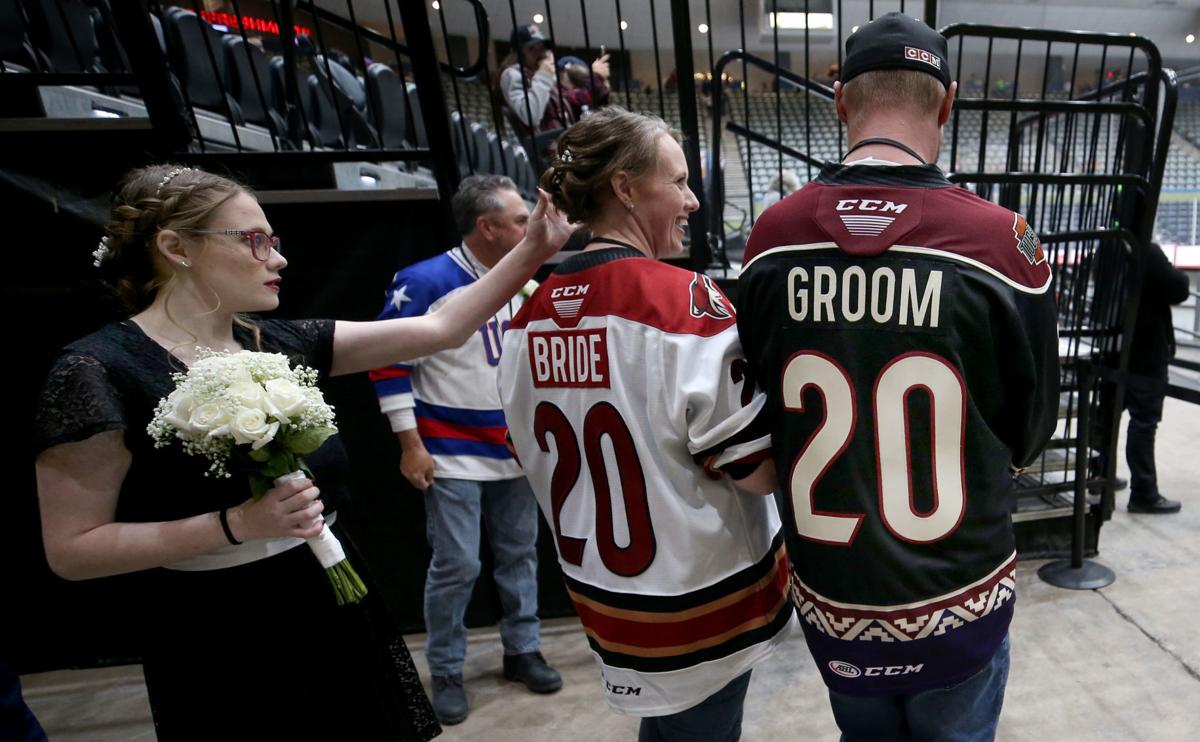 Jaely John fixes the hair of her mother, Annie, as she waits to go on the ice with Dustin during the pre-game skate before the Roadrunners game against Colorado at the Tucson Convention Center Arena on Friday night. 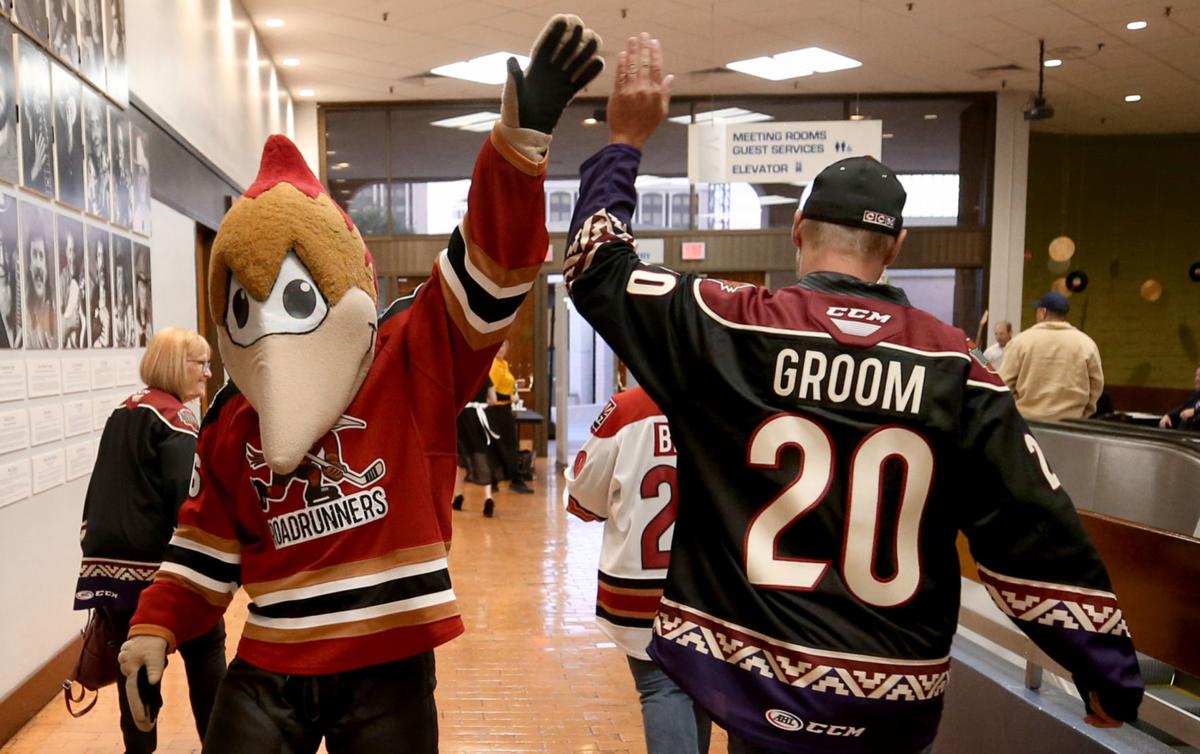 Roadrunners mascot Dusty high-fives Dustin before the wedding. Dustin and Annie met though the Roadrunners games and Dustin asked her out at the final game of last season. 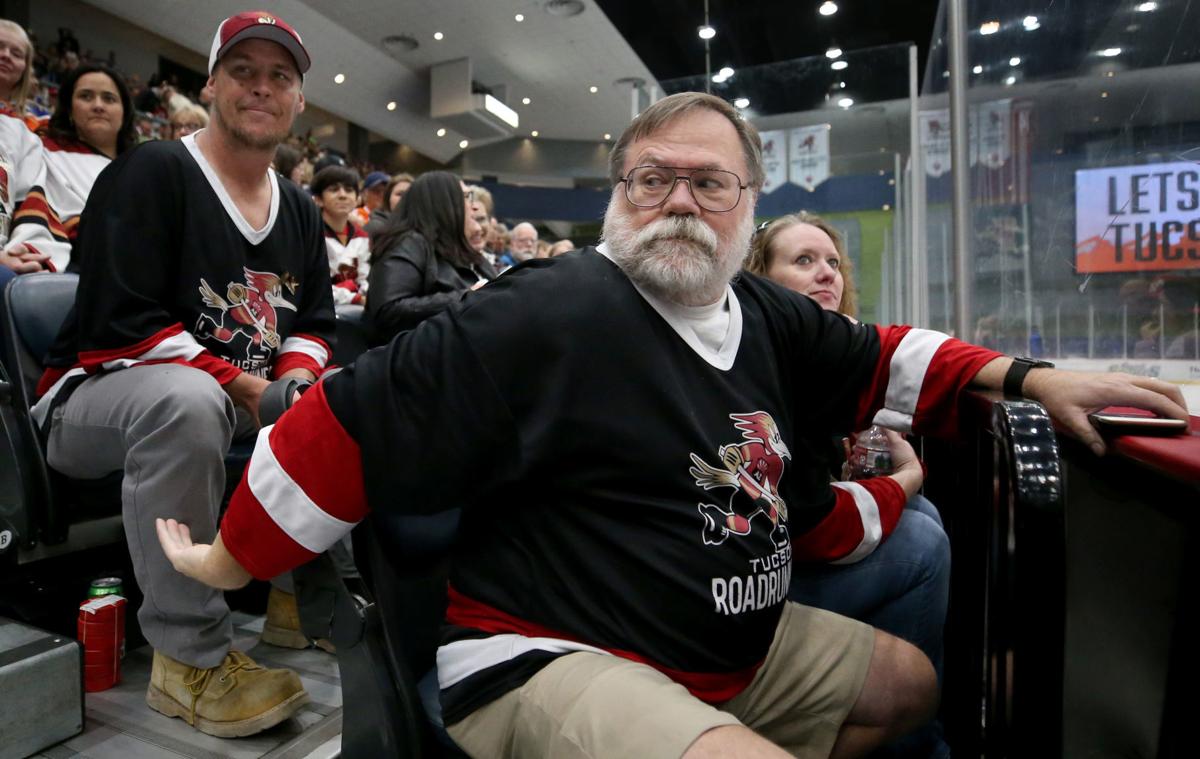 Mark Blair reaches back to grab the leg of his future son-in-law Dustin Powers during the first period of the Roadrunners’ game against Bakersfield at the Tucson Convention Center, January 24, 2020 Tucson, Ariz. His daughte, Annie, is at right. 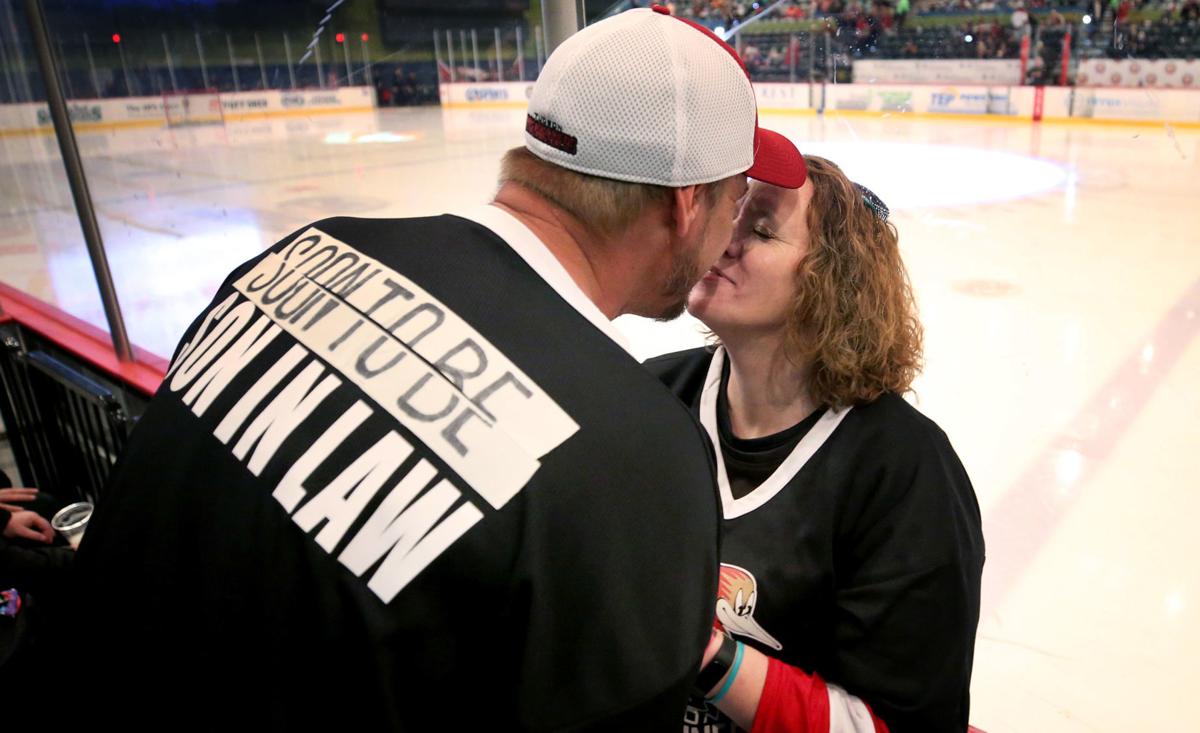 Soon to be son-in-law Dustin Powers gives his fiancé Annie a kiss just before the puck drop of the Roadrunners’ game against Bakersfield at the Tucson Convention Center, January 24, 2020 Tucson, Ariz. The two met at a Roadrunners game where their season tickets are within arms reach of one another.