The Tucson Roadrunners hadn’t won a hockey game in 334 days. Their season opener — originally scheduled for Friday night — was then delayed another two days.

So playing an extra one minute, 17 seconds Sunday was no problem.

The Roadrunners (1-0-0-0) defeated the San Jose Barracuda 2-1 on the stick of defenseman Cam Dineen’s overtime game-winner in the American Hockey League season opener for both teams.

The Tucson players flowed over their bench to celebrate on the ice, but the scene certainly added to the unusual nature of Sunday’s matchup.

As if the constant, almost soothing, hum of artificial crowd noise inside the spectator-less Tucson Arena didn’t create a unique enough backdrop for the Roadrunners’ first official game in nearly 11 months, Tucson being the designated “away” team for a matchup in its own home building just added to the atypical experience.

“We’re just happy to get it done, and hopefully some fans can start filing in here in the next couple of weeks. That would be great,” said Dineen, who, in overtime, picked up the loose puck near center ice during the three-on-three skate, drove down the left side and buried it, unassisted, past San Jose goaltender Alexei Melnichuk.

Added first-year Tucson head coach Steve Potvin: “It’s a great way to start. You definitely want to start with a win. I think a lot of us had goosebumps before entering the ice.

“Unfortunately we missed the fans, but just being around the game and having an opportunity to compete really got us excited.”

San Jose is the designated home team for Monday’s 7 p.m. rematch in Tucson Arena, too.

While COVID-19 restrictions on professional and college sporting events in Santa Clara County area were lifted in recent days, it was determined last month the Barracuda would begin the season away from their home facility, even though the schedule has them as the “home” team.

For the Roadrunners, playing the part of the visitors meant wearing their designated “road-white” uniforms, as well as using the visitors’ bench (that’s opposed to Tucson’s traditional seating arrangements coming on the south side of the ice sheet).

The Barracuda were also given the home treatment of coming out to the ice before each period last, with the arena music blaring (naturally, a cover of the aptly-named 1977 Heart rock anthem “Barracuda”).

When John Leonard scored San Jose’s only goal came seven minutes into the third period, the goal horn blared, and Lieb’s voice peaked as it normally would for the usual home team.

Even the Roadrunners’ mascot dressed the part; Dusty wore a teal shark onesie, paying homage to the Barracuda’s NHL affiliate.

So, when Dineen scored in overtime: no cheering crowd, no goal horn. But a win for Tucson, nonetheless.

Potvin, not even three weeks into his new gig after the past three seasons as a Tucson assistant coach, picked up his first career win going up against San Jose’s Roy Sommer – the AHL’s all-time leader in games coached and career wins, with 773.

Sommer spent part of last season with the NHL’s Sharks, but returned to the AHL this offseason.

“I have a tremendous amount of respect for him. While I was playing as a 21-year-old, I lined up against him as a coach,” Potvin said of facing an AHL legend in his first go-round.

“It’s been a long, long time, I guess, between now and then. His career has been obviously a real good one. He’s somebody I’ve definitely respected over the years.”

Potvin said he was pleased to see Dineen, a five-goal scorer from the blueline last year, and forward Tyler Steenbergen pick up the goals for Tucson. Steenbergen, like Dineen in his third year with the Roadrunners, scored eight goals last season.

He broke a scoreless tie Sunday inside two minutes to go in the second period.

“There’s no doubt in my mind that we can play four lines and have contributions from a lot of different players,” Potvin said. “I know (Steenbergen and Dineen) are ready to take another step in their careers.”

For Monday’s rematch, Potvin said he’d rather not have to rely on another 36-save outing from second-year goaltender Ivan Prosvetov.

“When your goalie’s going like that … it just allows you time to get into the game,” Potvin said. “But that’s definitely not a tactic we want to use often.

“At times your goalie’s going to have to be the best player, and tonight (Prosvetov) definitely was.”

This time of year, the Tucson Roadrunners are typically packing their bags.

The Barracuda learned of the positive test midway through  Saturday’s exhibition in Las Vegas against the Henderson Silver Knights.

Michael Bunting relishes time in Tucson, even though he can't wait to leave for the NHL

"Potsie" has been an assistant with Tucson for three seasons and part of the NHL’s Arizona Coyotes instructional tree for the past four.

The Roadrunners will open their season Feb. 5 at Tucson Arena, but they'll be the designated 'road' team.

Arizona improves to 2-4 with 3-1 win over Cardinal at McKale Center.

Deandre Ayton leads ex-UofA players with 16 points and 11 rebounds in Phoenix's win over Boston on Sunday.

There’s certainly a lot of season to go, but after the first weekend-or-so of American Hockey League action, the Tucson Roadrunners find themselves in a familiar spot: first place in the AHL’s Pacific Division.

The Roadrunners won 66%, 55% and 64% of their games in three full seasons with Sullivan in charge.

KWBA is available to Cox subscribers on Channels 8 and 1008 (HD); is Channel 8 for Comcast viewers, and Channel 58 for those with DirecTV or Dish Network. Over the air, it’s Channel 58.1.

The Roadrunners have dealt with a handful of scheduling concerns already in their short season.

Roadrunners, off to hottest start in club history, postpone next 3 games

Tucson's weekend game against the Barracuda have been postponed due to “league COVID-19 protocols affecting the (Roadrunners).”

The NHL’s Arizona Coyotes reassigned defenseman Kyle Capobianco, the most prolific scoring blueliner in Tucson history, and forward prospect Barrett Hayton to the AHL this week. 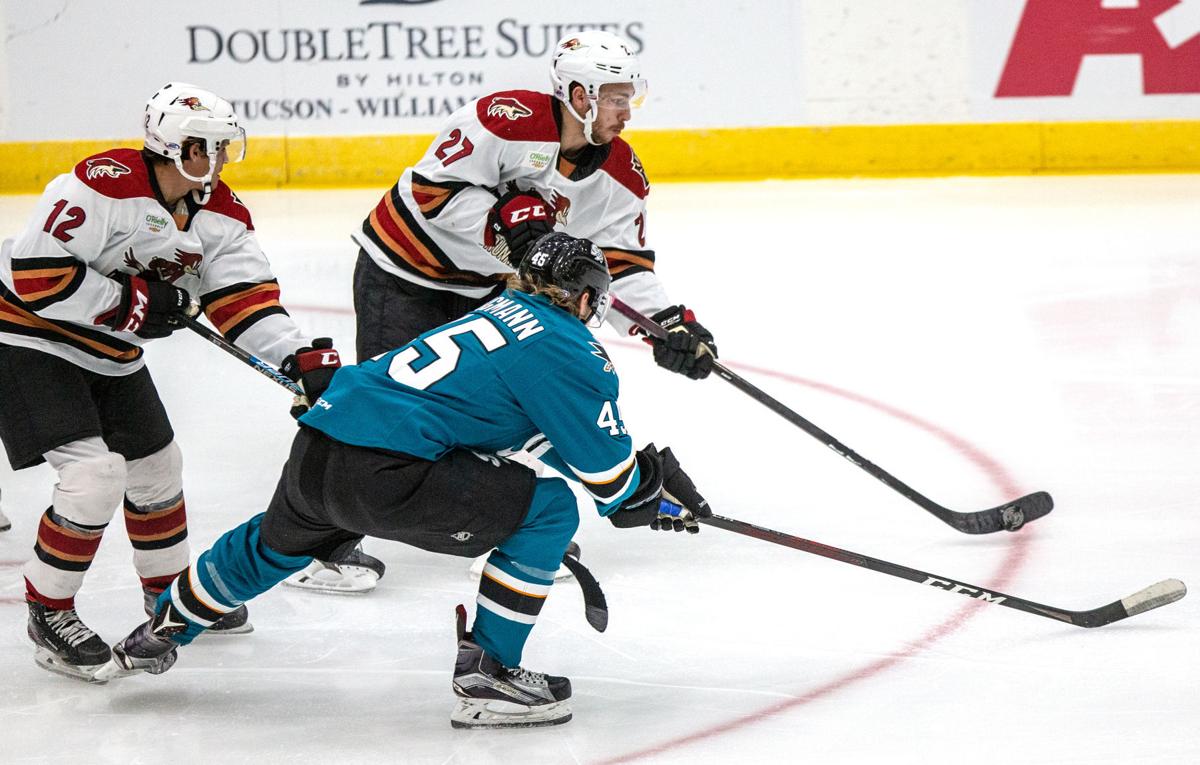 Tucson’s Michael Bunting (27) slides the puck up the ice as San Jose’s Lean Bergmann defends during Sunday’s game. The Roadrunners won their first game after nearly 11 months away from the ice. 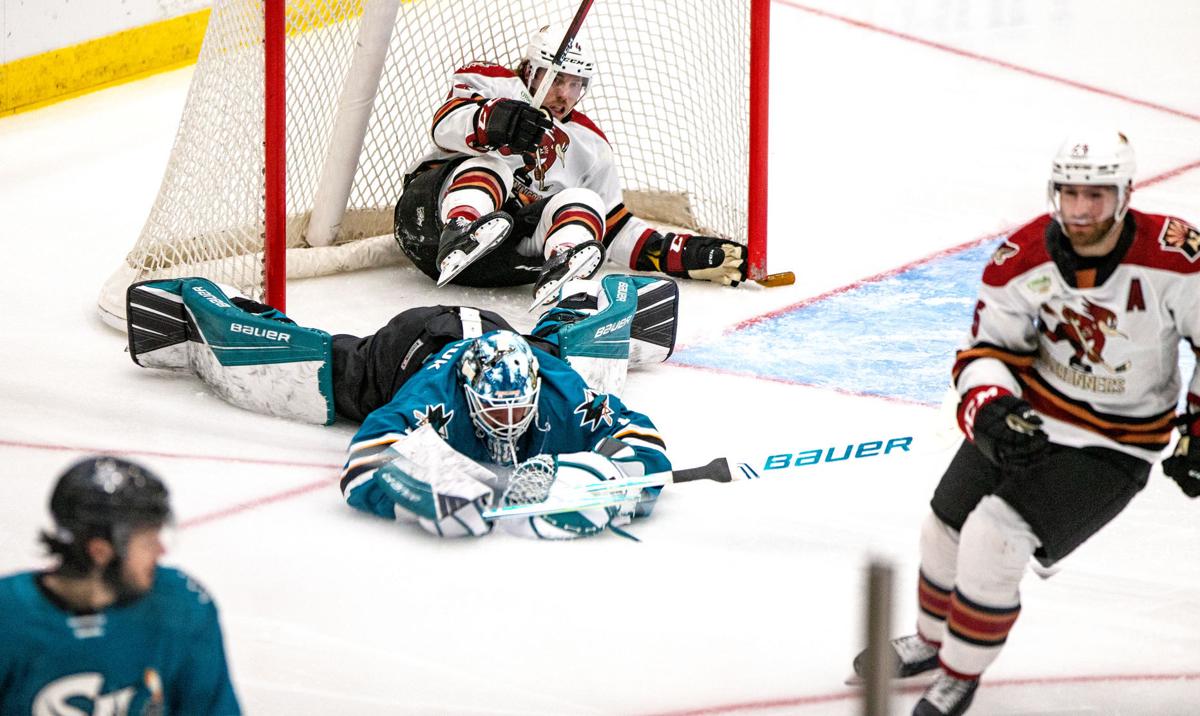 Roadrunners forward Nate Sucese, back center, gets himself up out of the San Jose goal after a fall during Sunday’s game at Tucson Arena. 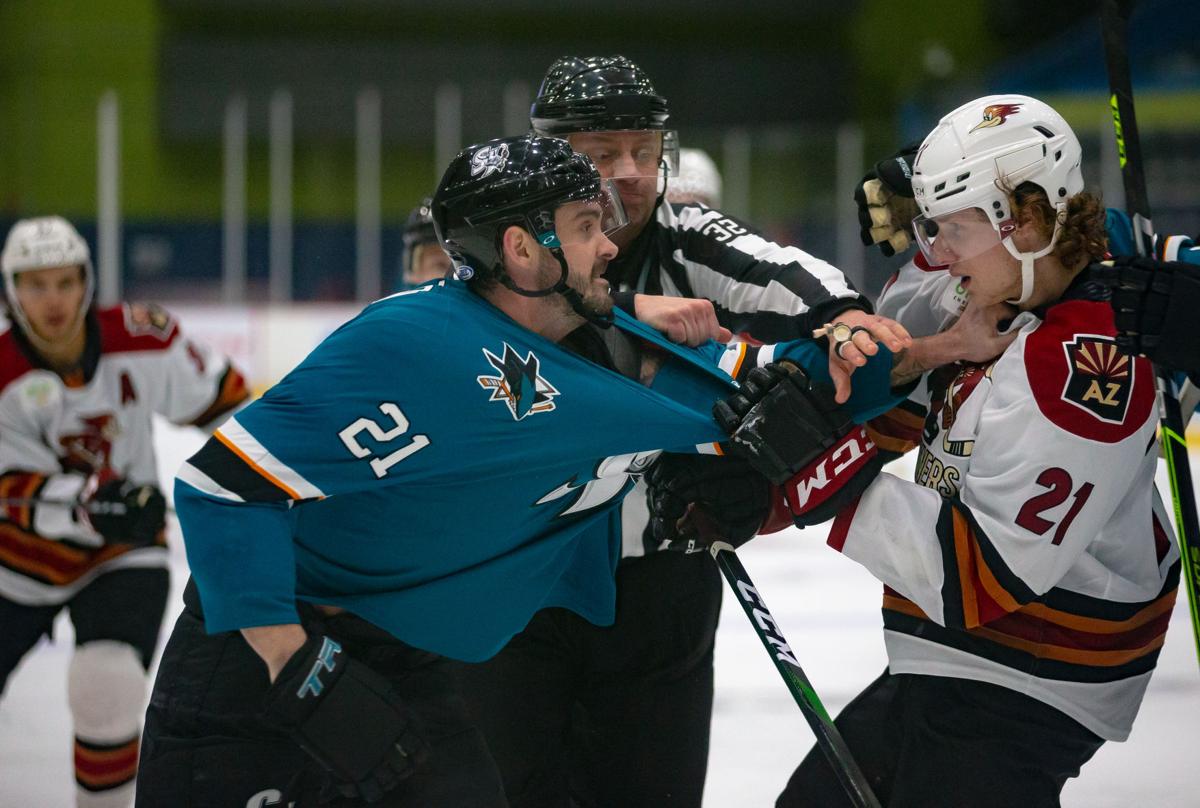 The game between the San Jose Barracuda and the Tucson Roadrunners was moved from Thursday to Friday.