Forward Blake Speers has only been with the Tucson Roadrunners for about two weeks, but that doesn’t mean he doesn’t already have an opinion on the makeup of his new team’s roster.

“This team is unbelievable. They’ve got a lot of prospects in this organization — a lot of guys who look to be pretty much NHL-ready,” said Speers, acquired last month in the blockbuster deal that also brought Taylor Hall, the 2018 NHL most valuable player, to the Arizona Coyotes. “It’s fun to be here, and I hope we can make a long run out this year.”

The American Hockey League will announce rosters as early as this weekend for its 2020 All-Star Classic, which takes place Jan. 26-27 in Ontario, California. Speers took a team-first approach when asked if he could predict who from the Roadrunners might get All-Star nods.

“There’s about six guys I could name off,” he said, understandably, if not unexpectedly, choosing not to play the name game.

Lane Pederson, who had his breakout year last season in finishing as the Roadrunners’ leader in goals and points only to charge out of the gates in the same fashion in 2019-20, wasn’t ready to name names either.

“Everyone’s success this year is just the body of work of what a good team game we’ve had through the first few months of the season,” said Pederson, whose team-high 16 goals are certainly cause for his own consideration.

A committee of the league’s coaches ultimately choose the All-Star rosters, and that group could have as hard a time as Speers and Pederson at whittling down the candidates to just a couple of Tucson players.

As the Roadrunners (24-7-0-0) turning their attention to Friday and Saturday 7:05 p.m. home outings against the San Jose Barracuda (10-17-0-2), Speers isn’t wrong: It’s conceivable to see any of a half dozen or more Tucson players chosen.

There most assuredly won’t be that many — not with the current All-Star setup, which mimics how the NHL runs its own All-Star weekend. Rather than a prototypical game pitting one conference against the other, the AHL, like the NHL, pits four teams of 12 players apiece against each other in a 3-on-3 round-robin mini-tournament.

A team exists for each of the AHL’s four divisions — Atlantic, North, Central and Pacific. The two-day event also includes a skills competition, with both days’ festivities televised on NHL Network.

With 12 spots available on the Pacific Division roster, and each of the division’s seven teams guaranteed at least one player, it’s likely the Roadrunners will get two, but no more than three, selections. A year ago, when San Jose entered the All-Star Classic atop the Pacific and among the league’s best overall teams, three Barracuda players were among the initial selections. Tucson’s in a similar spot this year — first in the division, and mere percentage points away from the league’s best overall record.

Which Roadrunners have the inside track?

might be a more unconventional choice on the surface, considering the defenseman doesn’t have the scoring prowess of others. But he is on pace to blow by his own career highs in goals, assists and points, and among 800-or-so current players on AHL rosters, Mayo leads the AHL in plus-minus at plus-24. The next closest, league-wide: plus-19.

It’s already a certainty the Roadrunners will be represented behind the bench, as the league announced earlier this week that Jay Varady would be the Pacific Division’s head coach, by way of the Roadrunners’ holding the division’s top overall record at the end of action Dec. 31.

“It’s an honor, and for me, it’s more a representation of how our organization has worked so hard in the first half,” Varady said of his own selection.

What if just a few things went differently? The world might look entirely different.

Cups runneth over? Coyotes’ big moves have an effect on Tucson, but both teams primed for a deep runs

Overtime and shootouts yield crazy results, but Roadrunners statistically atop the AHL both categories

Roadrunners coming up aces on the ice; Beau Bennett doing it in the (virtual) classroom, too

'I always like to keep my brain going,' he says.

Starks was scheduled to undergo surgery on her left shoulder Thursday morning.

Capobianco's selection is his third in as many years.

Tucson Roadrunners right wing Hudson Fasching describes how he lost one of his front teeth, whether or not it's a coincidence he's scoring mor… 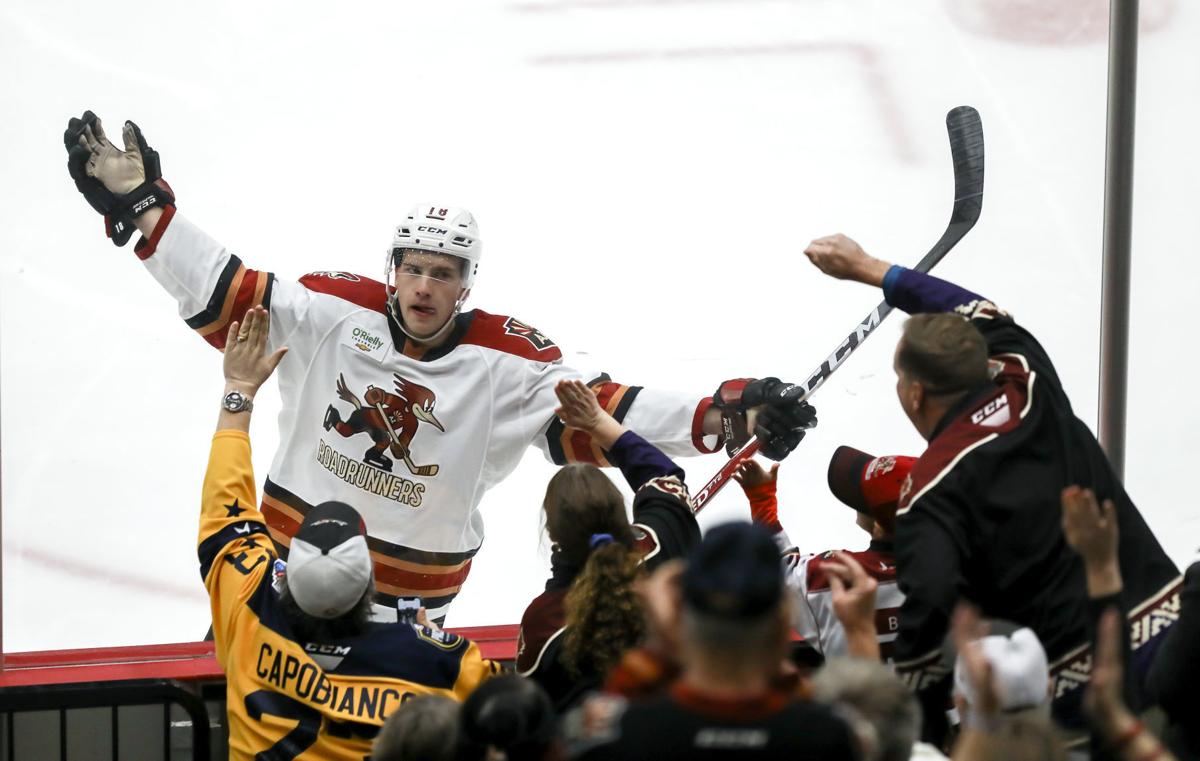 First-place Tucson will likely not get more than three All-Star selections. Center Lane Pederson, above, has a team-high 16 goals. 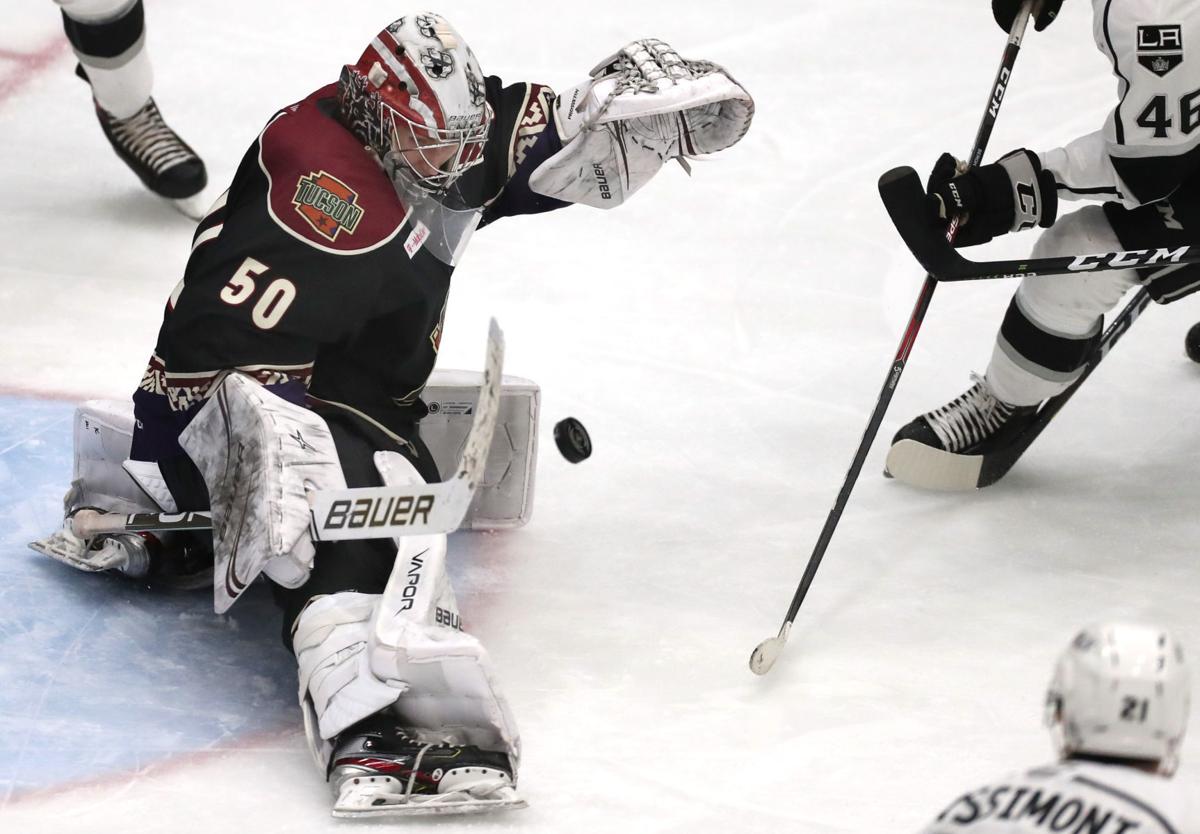 Roadrunners goalie Ivan Prosvetov fends off a Reign shot on goal despite being surrounded by three Ontario players in the third period of their December game in Tucson.