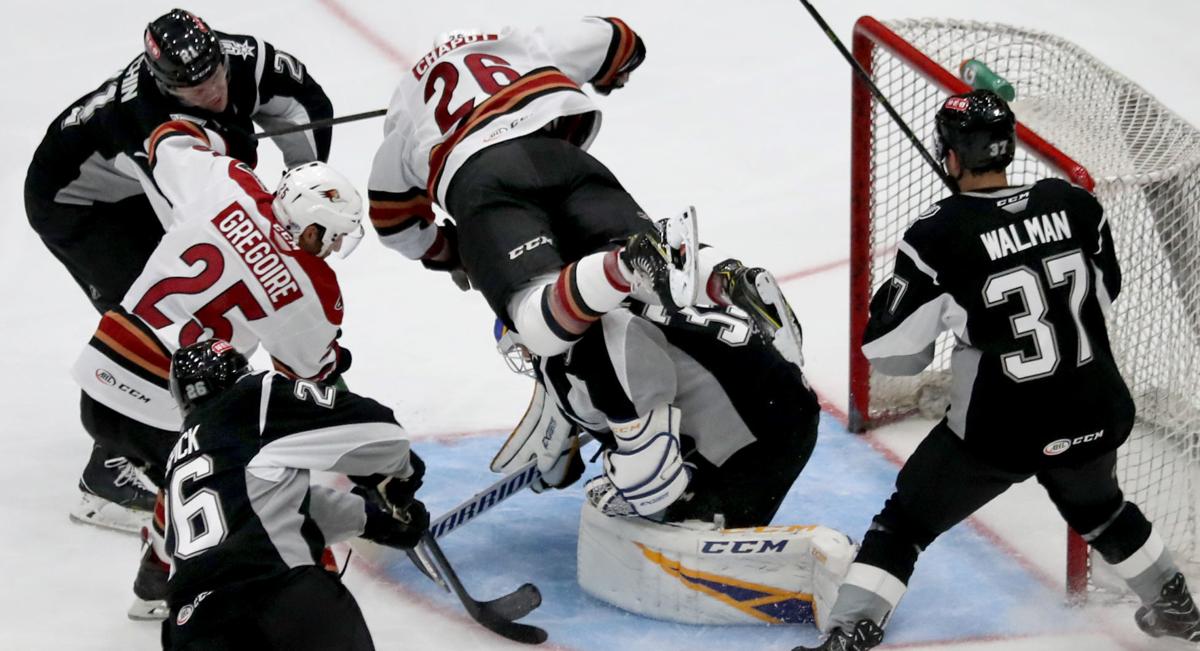 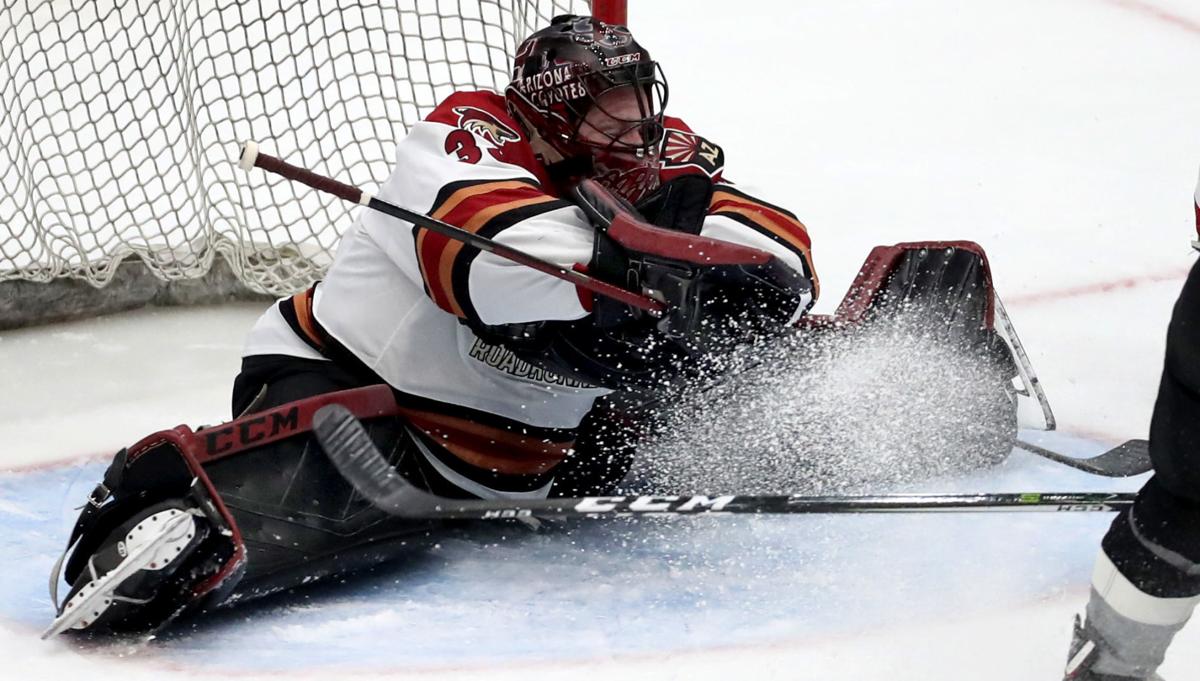 Roadrunners goalie Adin Hill spreads out as he absorbs a San Antonio shot in the first period of their AHL game at the Tucson Convention Center, Tucson, Ariz., Oct. 18, 2019.

His Tucson Roadrunners reaped the reward.

While the Roadrunners failed to hold on to a one-goal lead inside a minute to go in regulation Friday night in the club’s 2019-20 home opener at Tucson Arena, it was Miele’s fancy stick work in overtime that propelled Tucson to a 4-3 win over the visiting San Antonio Rampage.

“It’s funny. We were talking about it in the locker room that’s a situation where if that guy pokes it off my stick, he’s on a breakaway the other way,” Miele said of the juke he put on San Antonio center Ryan Olsen to ultimately skate in untouched and pot the game winner past Rampage goaltender Ville Husso. “But I like to kind of play it a little risky and that time it worked in my favor.”

Defensemen Jordan Gross and forwards Brayden Burke and Beau Bennett were the Roadrunners’ chosen trio during the early part of the 3-on-3 overtime format. With Gross and Burke streaking toward Husso and the San Antonio net in a 2-on-1 scenario, Bennett peeled off toward the Tucson bench. Miele jumped on and nearing full speed, picked the puck up just inside the blueline, made his move on Olsen, and drove in on Husso.

“I thought (Miele) did a great job with an unbelievable move there in overtime to convert,” Tucson coach Jay Varady said.

Added Miele, ready to point his attention to the next one: “The team’s happy about it, I’m happy about it, and now we’re going to focus on Saturday . … We’re bummed we didn’t win in regulation. But we’ll clean a couple things up, and (Saturday) we’ll be a little bit better with it.”

Despite San Antonio tying Friday’s game at three inside a minute to play in regulation — the Rampage pulled Husso in favor of a sixth skater — a strong outing from Tucson goaltender Adin Hill proved vital. Hill faced 42 shots overall, stopping 39.

“I thought Hiller made great saves for us all night. He had a strong start, and carried it right through the whole course of the game,” Varady said.

“He was huge tonight,” added Miele. “In that first period, some of the saves he made, the game could have gone a completely different way. When you’ve got the confidence in the goalie like we did tonight, it makes it a little easier for us to play our game.”

But the Roadrunners responded barely two minutes later, scoring twice in a span of 14 seconds to jump out front. First it was Lane Pederson notching his fifth of the year before Michael Chaput picked up his second goal of the season. Robbie Russo and Miele had assists on Pederson’s power play goal, while Nick Merkley was credited with a helper on Chaput’s quick strike.

Nolan Martin and Nick Lappin also scored for San Antonio, while Jon Martin’s second of the season — with assists by Cam Dineen and Bennett — rounded out Tucson’s regular output.

Announced attendance for Tucson’s first home game of the 2019-20 season came in at 5,593. That’s not quite the 6,300-plus announced for last year’s home opener, but Varady recognized the crowd’s impact on the game nonetheless.

“It was a fantastic crowd tonight,” he said. “Lots of energy in the building.”

• Who: Rampage at Roadrunners

Team is 4-1 after pair of wins at Tucson Arena.

Roadrunners goalie Adin Hill spreads out as he absorbs a San Antonio shot in the first period of their AHL game at the Tucson Convention Center, Tucson, Ariz., Oct. 18, 2019.