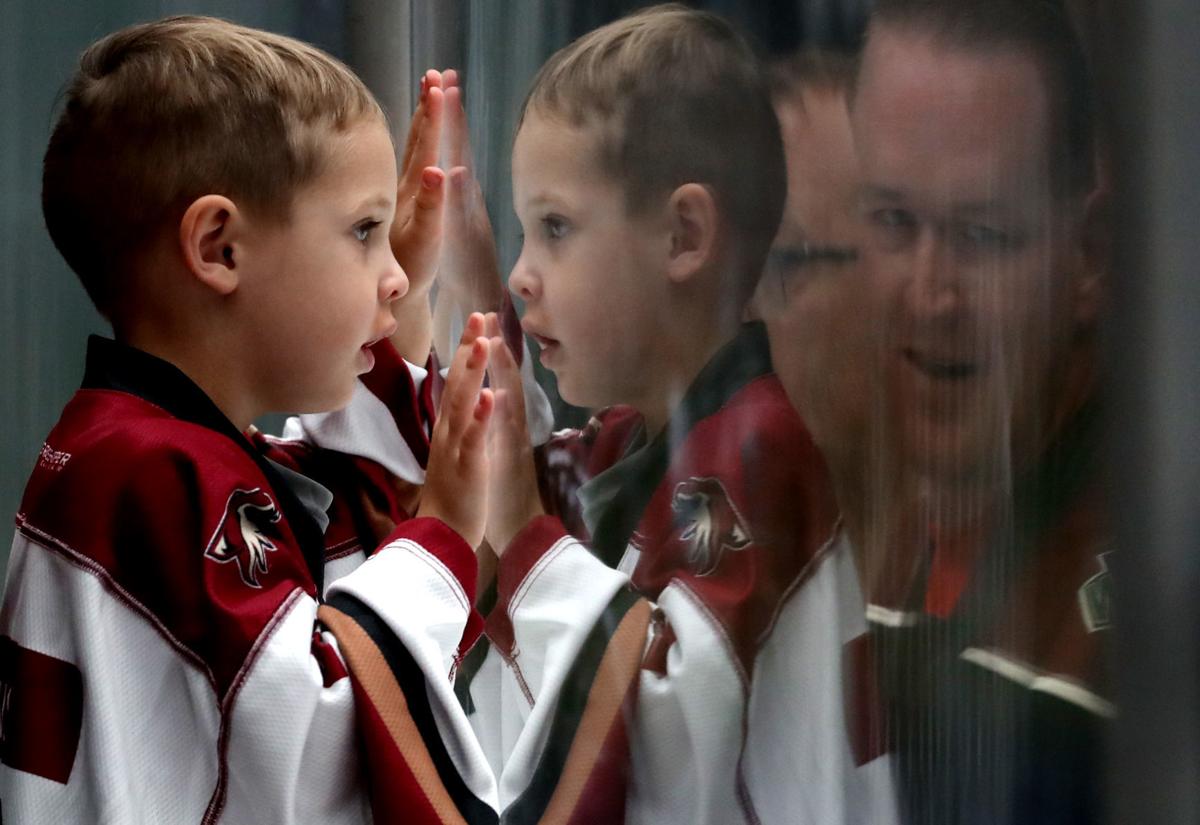 Roadrunners fan Kade Behrens peers through the glass as he watches the Roadrunners’ pre-game skate last week. Tucson swept its first home series of the season, and — at 4-1-0-0 — will host the undefeated Iowa Wild in a two-game series starting Friday. 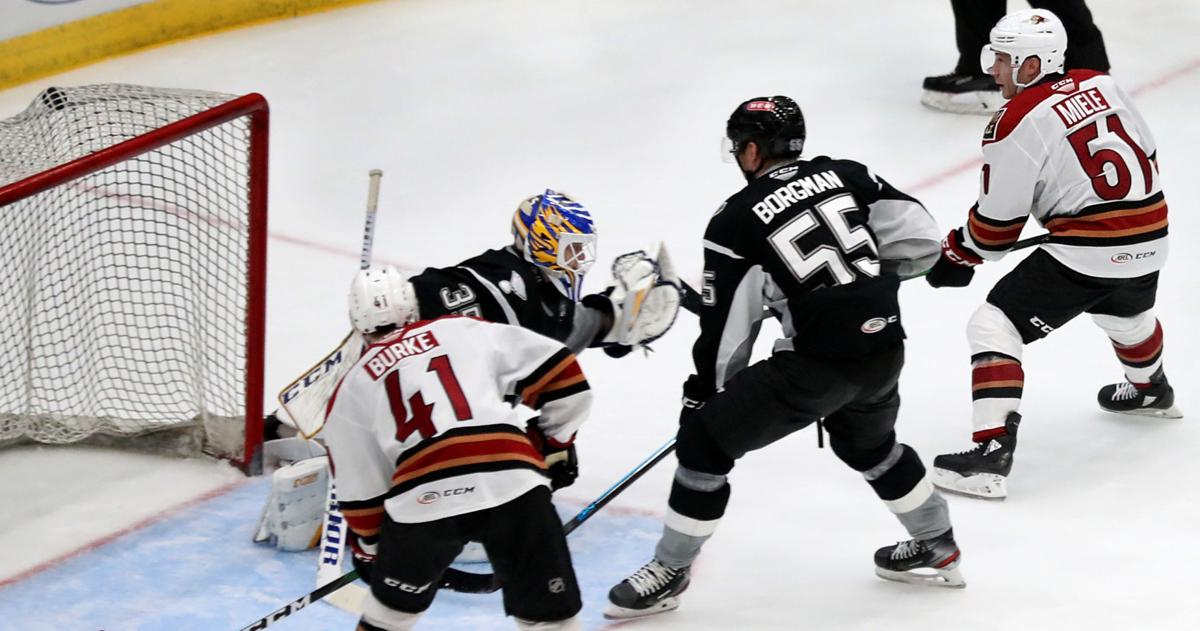 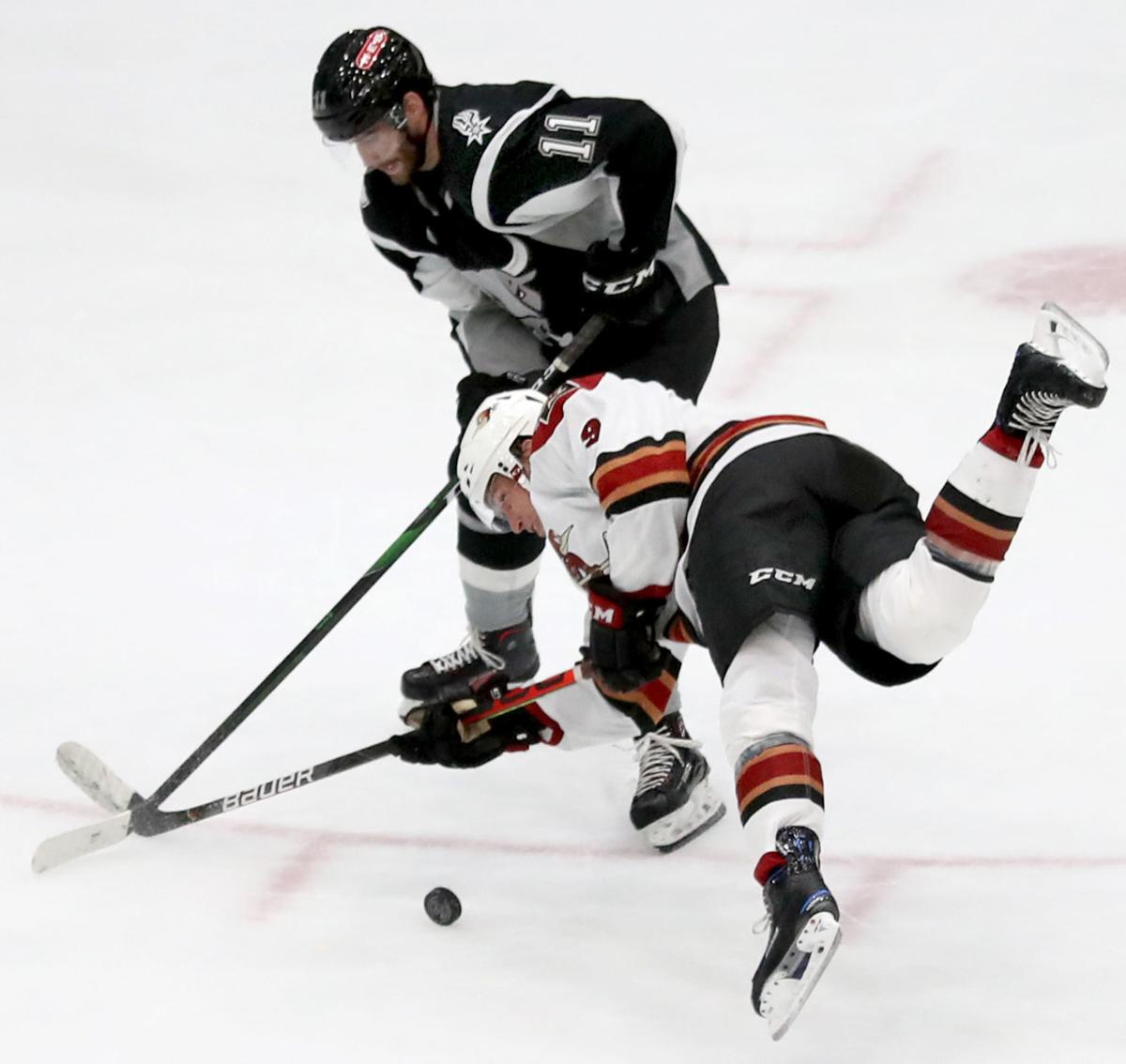 With the offseason addition of defenseman Aaron Ness, 29, alongside Miele and Bennett up front — that all followed the pick-up of forward and current Tucson captain Michael Chaput, 27, via trade late last season — the Roadrunners’ front office has shown a willingness of late to let its roster age up a bit.

And, as the Roadrunners get ready to host the also-impressive Iowa Wild (5-0-0-1) in Friday and Saturday tilts at Tucson Arena, with age has certainly come a bit of beauty on the ice — by show of the Tucson’s 4-1-0-0 record so far this season.

“When I heard they were bringing in some older guys in Ness and Miele,” Bennett said, “it just seemed like a great opportunity to build on what these younger guys did last year.”

Even as newcomers, Miele, Bennett and Ness each bring experience, maturity and, well, a few battle scars. Miele sees that all as necessary for the Roadrunners to make the evolution from almost-playoff-bound to actual AHL Calder Cup contenders.

“It’s so important in the AHL to have some older guys who have been around and are OK with being in the AHL – guys who want to make things better here,” said Miele, who has now played parts of seven AHL seasons, in addition to experience in the NHL and professionally in Sweden and Russia.

“I think between me, Beau and Ness, as the new guys coming in, we can bring that experience and that attitude and tenacity.”

Bennett echoed his new teammate’s sentiment when it comes to having players who are comfortable in a league that is that proverbial single step from the game’s biggest stage – the NHL.

“I think it’s huge. … Young kids, of course they want to be everyday NHLers. That’s the goal,” Bennett said. “But for older guys who can give our experiences, and how we got to this point — not necessarily that we’re not pushing for those jobs or what not — but just to be a crutch for these young kids to lean on when things aren’t going as good as they are now.

It isn’t just experience, Miele notes. It’s success at various levels, too. Winner of the 2011 Hobey Baker Award — the NCAA hockey equivalent to the Heisman Trophy — before his long professional run, Miele had a run of four straight AHL seasons with at least 44 assists. It’s early, but he’s well on pace for that this year, with a goal and five assists through five games so far. Bennett, to boot, has played in 200 NHL games, including as part of the Pittsburgh Penguins’ 2016 Stanley Cup winning squad.

For Ness, not only was he the top-point-producing defenseman in the entire AHL last season, but, as the second home series of the season approached this week, he was still away from the Roadrunners, in fact. The Arizona Coyotes recalled Ness last week to fill an NHL roster spot while Coyotes defenseman Jordan Osterle was in the league’s concussion protocol. It’s expected he’ll return to Tucson, but a long NHL stay is hardly out of the question, either.

“Leadership is a big thing. I expect that out of myself,” Ness said prior to his call-up about what the club’s older newcomers can bring to the table. “I think right away, we show (younger players) the way as much as we can. But a lot of these guys have been here.”

Ness is right. A significant portion of the Roadrunners’ roster is made up of so-called younger players who have been in Tucson for at least a season or two — and in some cases three or more.

That includes lamplighters Lane Pederson, 22, Michael Bunting, 24, and Nick Merkley, 22, and goaltender Adin Hill, 23. On the blueline, Robbie Russo is the old guard at 26 years old, while Cam Dineen is just 21. And Dysin Mayo, now in his fourth season in Tucson, is only 23.

And, as time tends to work, all are, of course, a year older and wiser than at this time last season.

“‘Nesser’ has been to the (AHL) finals before. Beau has been with a team that’s won the Stanley Cup. And I’ve been pretty far in the playoffs, too,” Miele said. “We bring in an aspect (the Roadrunners) haven’t in the past year or two, so we’re excited to be part of the rebuild and see what we can do with this team.”

Team is 4-1 after pair of wins at Tucson Arena.

Tucson scorer has been a different player since last Christmas, teammates say.

He didn’t expect Roadrunners’ captaincy, but Michael Chaput ready to roll with the 'C' on his chest

"Nice surprise" to Chaput's season gives Roadrunners someone to look up to.

Hot start to season old hat for Roadrunners; will 2019-20 deliver more of same?

Team's 2-0 win on Friday night the latest in a series of hot starts for Tucson's professional hockey team.

Roadrunners fan Kade Behrens peers through the glass as he watches the Roadrunners’ pre-game skate last week. Tucson swept its first home series of the season, and — at 4-1-0-0 — will host the undefeated Iowa Wild in a two-game series starting Friday.