The Henderson Silver Knights proved again Wednesday what they’ve actually been showing the American Hockey League all season: the number of shots on goal a team takes on a given night doesn’t always correlate with how many goals a team scores.

Or, for that matter, whether it wins games.

In their first-ever matchup with the Tucson Roadrunners (7-11-1-0), the Silver Knights (16-3-0-0), the newest team in the American Hockey League’s Pacific Division, skated away with a 3-1 victory in the opener of a three-game series this week at Tucson Arena.

Henderson and Tucson square off again Friday and Saturday, with both outings at 7 p.m.

The Silver Knights, who took the early 1-0 lead on a goal by Jimmy Schuldt on the game’s first shot on goal barely a minute into the game, only ended up with 17 shots when all was said and done. The Roadrunners nearly tripled that, finishing with 45 of their own. Both numbers were season bests for Tucson, with the 17 against tying the fewest the Roadrunners have allowed all season through 19 games, and the 45 in favor topping Tucson’s previous high of 42.

“I think we’re doing a good job of generating (offensive) zone time, and funneling pucks on net. But I think we need to get inside and get sticky around the net,” Tucson defenseman Kyle Capobianco said.

“I think goalies are so good in this league, that you’ve got to take away their eyes,” he added. “And we’ve got to capitalize on second chances. I think there were some rebounds kicked out today that were just in a spot that I think we can find a soft area and maybe get one of those.”

It’s not as if Wednesday’s scenario was anything new for Henderson, even if it has rarely been that lopsided.

In its first season as the AHL affiliate of the NHL’s Vegas Golden Knights, Henderson has been outflanked in total by more than 100 shots on goal so far this season. That’s happened even as their league-best win percentage climbed to .842 with Wednesday’s win. On average, the Silver Knights take about 26 shots on goal while giving up 32. Tucson, for its part, came in to Wednesday’s game averaging near identical marks of 31 shots for and 31 against per outing.

But the clearer issue for the Roadrunners these days isn’t so much getting pucks to the net; it’s getting them in. The team's 2.58 goals per game is now third-worst among the AHL’s 28 teams. Tucson’s scoring defense of 3.47 goals against per game is in the bottom six, league wide. Those marks have contributed to Tucson falling into a near dead-heat for last place in the Pacific Division with the Ontario Reign.

Tucson’s lone goal Wednesday came on a 5-on-3 advantaged by prospect Barrett Hayton, with Brayden Burke and Capobianco recording assists. After being reassigned from the Coyotes to the Roadrunners, Hayton’s AHL season started without any points in his first eight games. But over his last seven games, he's notched two goals and three assists for five points.

“He needed a bounceback game. I don’t think he was really satisfied with his game (last weekend) in San Diego,” Tucson coach Steve Potvin said of Hayton. “He came out the last couple of days in practice and he had some real intent, and had some things that he wanted to clean up. … He showed up with a mindset of striking and playing his game.”

Hayton’s goal came just less than three minutes after Henderson’s initial score in the first period, tying the game at one apiece five minutes into the game.

Henderson added two more — both in the second period. Carl Dahlstrom scored 16 minutes into the middle period, and Cody Glass with less than a minute to go. Glass finished the game with a goal and an assist, while Lucas Elvenes carded three assists for the Silver Knights.

Thompson stopped 44 of the Roadrunners’ 45 shots, while Tucson goaltender Connor LaCouvee turned away 14 of 17 in defeat.

Roadrunners’ top-flight penalty kill, led by Steenbergen, others, usher in second half of 2021 schedule

Here’s a look at the good, the bad and the perplexing of Tucson’s first half, as well as what’s to come between now and the season finale on May 16.

Few teams had hotter starts to the 2021 American Hockey League Season than the Tucson Roadrunners and the San Diego Gulls.

One step forward, two back for Roadrunners in 6-2 home loss to Ontario

Tucson loses Wednesday for eighth time in 10 games after 4-0 start to the season.

“I think that’s probably the most fun I’ve ever had playing hockey. It was an absolute blast,” said Tucson goaltender Connor LaCouvee, who played in the 2015 Frozen Four as a backup goaltender for Boston University. “We came one shot away from winning a national championship.”

Kevin Roy has proven once already in his career that he can play at the NHL level.

Gulls notch five goals in the opening period and go on to win 8-6 at Tucson Arena. 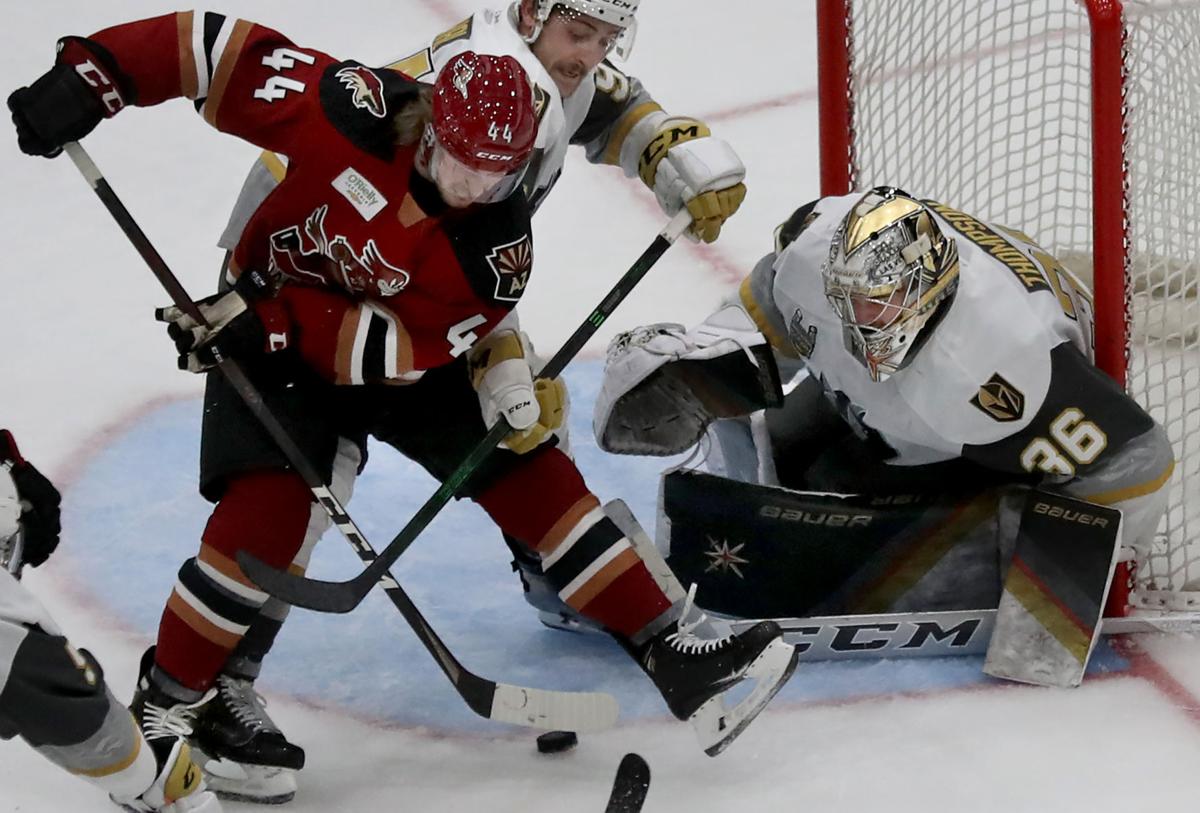 Roadrunners' Nate Sucese (44) attempts a to scoop the puck back but can't beat Henderson's Brayden Pachal (94) and goalie Logan Thompson (36) in the third period of their AHL game at the Tucson Arena, Tucson, Ariz., March 31, 2021. 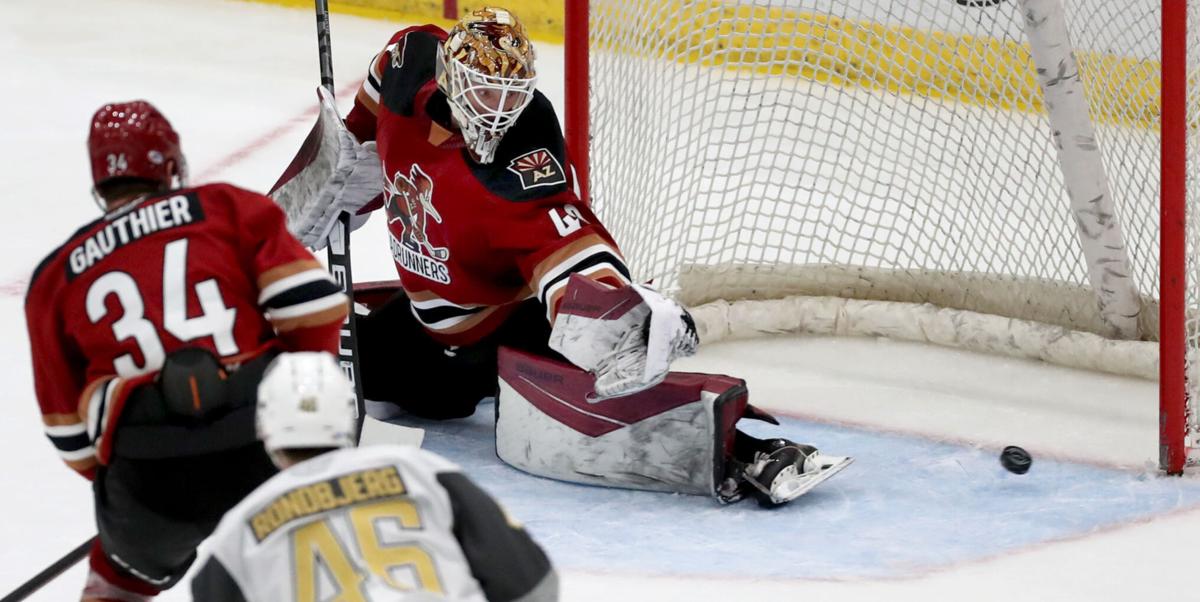 Roadrunners' Connor LaCouvee (40) watches the puck head for the post and in for the Silver Knights' third goal of the game for a 3-1 Henderson lead in the second period of their AHL game at the Tucson Arena, Tucson, Ariz., March 31, 2021.