A gentle warning to Tucson Roadrunners fans attending the club’s American Hockey League preseason opener Wednesday night: Your favorite player may not be there.

The Roadrunners haven’t seen an offseason like this one, well, ever.

Franchise all-time Mr. Everything Michael Bunting is gone after his spring star turn with the NHL's Arizona Coyotes, Tucson's parent club; he makes Toronto home these days. One-time wunderkind forward Brayden Burke, who struggled to rekindle his sharpshooting amid lingering injuries during the shortened 2020-21 campaign, is out west, shipped to Los Angeles in a trade.

Adin Hill, Tucson’s career leader most goaltending categories, is gone, too, sent to San Jose in another offseason deal. Tucson stalwart Lane Pederson is there, too, while Tyler Steenbergen is taking his game oversees to Finland.

In all, five of the franchise’s top 10 in games played, and the club’s top three career goal scorers — Bunting, Pederson, Burke — are all gone.

But ask virtually anyone around the Roadrunners these days for their outlook on the upcoming campaign, and the answer invariably turns to who is in Tucson, rather than those who aren't.

“We all know things change in the American Hockey League,” Tucson coach Jay Varady said. “The players we have here right now is our focus. Those players are the ones were helping prepare to play.”

Considering the AHL’s status as a developmental league, Roadrunners faithful have been lucky to have so many of the same faces around year after year.

But even with that aforementioned quintet’s departure — let alone the the offseason move that sent one-time Roadrunner favorite and Coyotes’ scoring threat Conor Garland to Vancouver — Tucson still has its share of veteran returners.

Defensemen Dysin Mayo is the elder statesman of the Roadrunners, and it would be a surprise if he’s not wearing either a “C” or “A” on his jersey this season. Mayo, who’s played at least 25 games in every Tucson season to date, needs just 10 to surpass Bunting as the club’s all-time leader in appearances at 261.

Fellow blueliner Cam Dineen, 23, also returns for his fourth season — as does forward Hudson Fasching, who spent most of the 2020-21 season on the Coyotes’ taxi squad. Ivan Prosvetov can be considered a veteran, too. The third-year Roadrunner is expected to carry the load in goal to start the season.

Mike Carcone, the Roadrunners’ leading goal scorer a year ago, is also back.

Carcone played for the Roadrunners last season while under contract with the NHL’s Nashville Predators. He impressed the local brass so much that the Coyotes signed him in the offseason.

Perhaps the most important return, though, is that of Varady himself. The coach is back after spending last season as an assistant with the NHL's Coyotes. Prior to the start of Monday’s training camp, Varady, who helmed the Roadrunners from 2018-20, hadn’t been inside of Tucson Arena for hockey purposes since the night in March 2020 when his first-place Roadrunners saw their season go on pause.

The kids really are all right

With the NHL club in full rebuild mode, Coyotes general manager Bill Armstrong wants the club’s up-and-coming prospects, including defenseman Victor Sodorstrom and forward Jan Jenik, to develop with the Roadrunners. It's better to mature in Tucson, he reasoned, rather than get thrust into full-time NHL action before they're ready.

Liam Kirk and Matias Macelli will get their first taste of North American professional hockey action with the Roadrunners, while Ben McCartney, Ryan McGregor, Cam Crotty and Ty Emberson are expected to get near full years in Tucson.

“Every year I come in, it feels like I’m say we’re going to have a young team this year,” Mayo said. “But this year, it really is probably the youngest team I’ve played on. With the young guys you get a lot of energy.”

What to expect at the arena

For the first time since March 2020, Roadrunners home games will be open at full capacity. That’s 6,521 at Tucson Arena, though the club averaged between 4,000 and 4,300 during its first four seasons of play.

Fans won’t be permitted near players — high-five tunnels heading to the locker room are a thing of the past — but intermission activities like the “chuck-a-puck” as well as pregame ceremonial puck drops will return, though without players involved.

What to expect around the AHL

Before the 2019-20 AHL season shut down at the onset of the coronavirus pandemic, the Milwaukee Admirals seemed well on their way to competing for a Calder Cup. The Roadrunners weren’t far behind, either. But no cup was awarded that season, nor in 2020-21. Last year, both Milwaukee and 2018-19 champion Charlotte bowed out of play due to the pandemic.

All teams are back in the game this season, with a whopping nine of them playing in the AHL’s Pacific Division. The list includes Tucson, San Diego, Ontario, San Jose, Bakersfield, Colorado and last year’s new kid on the block, Henderson. The Stockton Heat are back in central California after a year playing in Calgary near their NHL affiliate, while the division also welcomes the Abbotsford Canucks into the fold.

The addition of Abbotsford, a town located about an hour outside Vancouver, means the Roadrunners’ Dec. 22 and 23 trip will be their first north of the border since their inaugural season.

How good can the Roadrunners be?

Talent on the ice aside — and it’s arguable this Tucson team is deeper than any before —  the Roadrunners' five-year history has been a see-saw of sorts.

In the club’s debut season of 2016-17, Tucson started hot but finished sixth, missing the playoffs. The next year, Tucson won its division and finished with the Western Conference’s best record.

The Roadrunners were fifth the following year, before capturing the club’s second division championship in the shortened 2019-20 campaign.

And last season, Tucson finished last in the Pacific.

So if the calendar aligns and history repeats itself in 2021-22, the Roadrunners could be in line to hang another banner.

Ferguson’s hire gives the Roadrunners a direct connection to the Coyotes' front office, something they went without for most of last season.

Coach previous led Tucson's American Hockey League team in the 2018-19 and 2019-20 seasons before spending a year with the Arizona Coyotes.

If you can’t beat 'em (up), trade for him: Roadrunners add old nemesis Bokondji Imama

Bokondji Imama and his Roadrunners teammates will open their home schedule Saturday night against the Texas Stars. 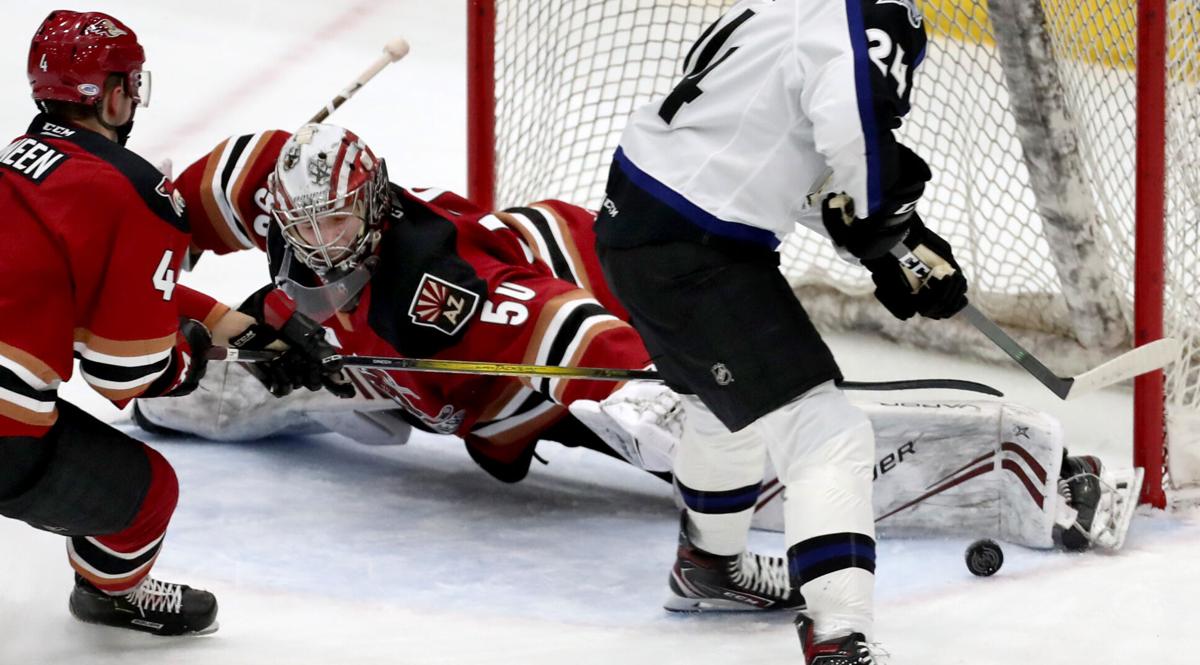 Goaltender Ivan Prosvetov is expected to be one of the Roadrunners’ top players during his third season in Tucson. 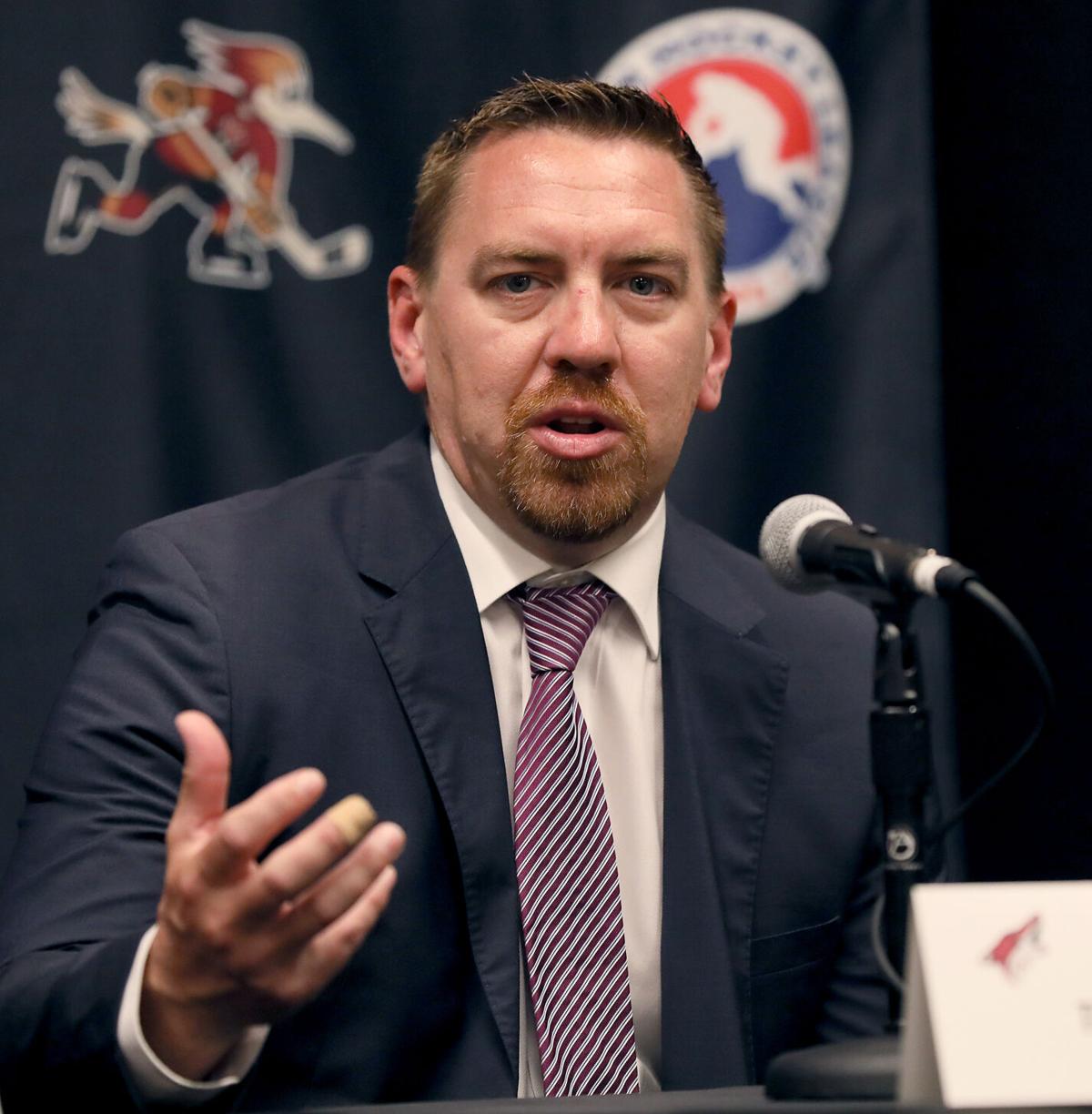 Jay Varady is back as the Roadrunners’ coach after spending last season with the NHL’s Arizona Coyotes.