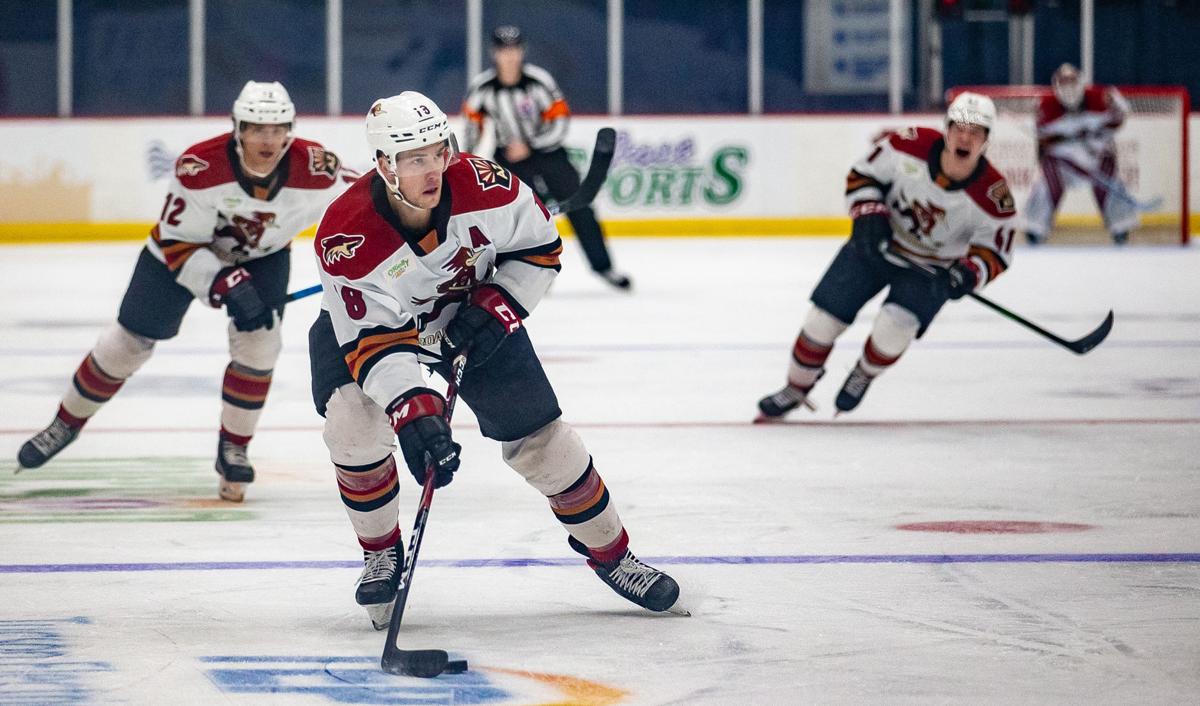 Lane Pederson slides the puck up the ice during a Feb. 7 game against San Jose at Tucson Arena. The teams’ three-game weekend series has been postponed due to COVID-19 issues. 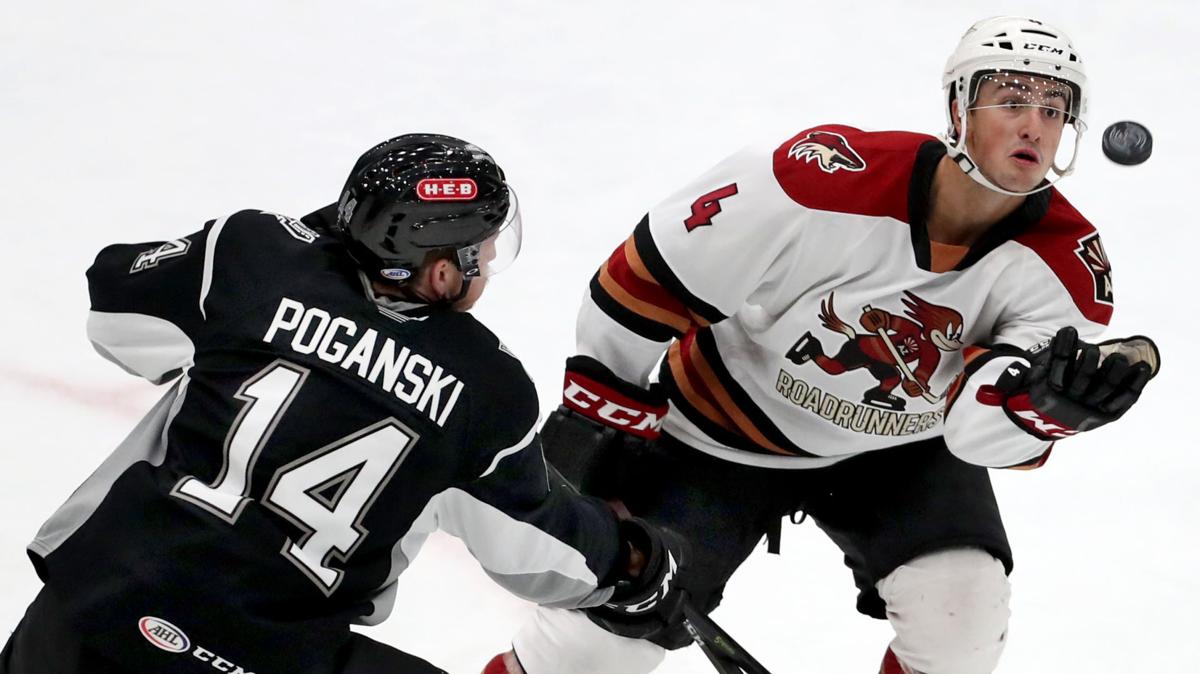 Roadrunners Cam Dineen gloves a flying puck in front of San Antonio Austin Poganski in the third period of their AHL game at the Tucson Convention Center, Tucson, Ariz., Oct. 19, 2019.

By Brett Fera Special to the Arizona Daily Star

The 2021 American Hockey League season may still be in its infancy, but the Tucson Roadrunners have what seems like an embarrassment of riches.

A quartet of players near the top of the league’s scoring charts; a head coach who hasn’t lost a game in that chair; and a mixture of emerging veterans and experienced newcomers gelling from the get-go.

All that has led to a 4-0-0-0 record — the best start to a season in the franchise’s five years in Tucson.

That momentum did hit its first real speed bump Thursday, when the AHL announced late in the day that the Roadrunners’ three games this weekend at Tucson Arena against the San Jose Barracuda would be postponed due to “league COVID-19 protocols affecting the (Roadrunners).” The first game had already been moved from Thursday to Friday because of San Jose’s travel issues.

While the league’s COVID-19 protocols are not publicly available, a Roadrunners spokesperson told the Star the decision was made “in an abundance of caution” due to “potential exposure with close contacts” within the Roadrunners “authorized hockey personnel” group. That includes players, coaches and a limited number of other team personnel.

Whether those games will be rescheduled, and what the pause may mean to the Roadrunners’ next scheduled game — a road matchup with the Colorado Eagles on Wednesday — was not immediately clear.

Either way, the Roadrunners would like to continue what’s been working on the ice these first couple of weeks — that is once they do get back to game action.

Forward Michael Bunting entered this week off to the hottest start of his career, with league-bests of four goals and seven points through four games. He’s flanked by veteran forwards Lane Pederson and Kevin Roy (six points apiece) and rookie prospect Jan Jenik (five), who all were at least tied inside the AHL’s top 10 point producers after two weekends of play.

Coach Steve Potvin said that despite the hot start, the Roadrunners need to get better as the season goes on.

“There’s definitely a lot of game left, and there’s a whole lot of room for improvement. But I will say I’m really happy how we’re going through the process daily.

“They’re looking for ways to get better in practice. They’re stressing their bodies during practice time … and it’s allowing them to go into game situations with cool minds.”

Entering the week, Tucson was one of four AHL teams with perfect records through four games or more.

“We’re going to be playing those teams a lot coming up here, so not everyone can stay undefeated,” defenseman Cam Dineen said after the Roadrunners’ practice session Wednesday afternoon. “We can’t get complacent about that.”

As explosive as recent AHL All-Stars Bunting — the league’s reigning Player of the Week — and Pederson have been, newcomers like Roy and Michael Carcone and up-and-coming prospects like Dineen have also stood out.

Carcone and Roy entered the 2021 season having skated in a combined 431 AHL games over the last four seasons.

They have filled holes left by the departures of Beau Bennett (still a free agent), Andy Miele (playing in Russia) and Hudson Fasching (currently with the Arizona Coyotes’ NHL taxi squad).

“At this level I feel like everybody always has something to prove. Clearly these players have come in having a mindset of wanting to get to the next level,” Potvin said about Roy, signed in the offseason to an AHL contract, and Carcone, who is on loan to the Roadrunners from the NHL’s Nashville Predators. “Regardless of Carcone’s situation with Nashville, he wants to find a way to get better. He could potentially be a call-up for them.

“Roy is doing the exact same thing,” Potvin added. “He’s come in with the mindset of improving his game.

“Whatever challenge lies ahead for him, he’s willing to accept it and try to better his game.”

In Dineen’s case, his two goals so far — including the overtime game-winner from the left-side faceoff dot in a 2-1 season-opening win against San Jose — are already almost half-way a career high.

“Coming into this year with everything being a little up in the air and guys getting called up more often and things like that, I think it opens up a chance for me to get opportunities I haven’t had yet in my career,” Dineen said.

In his third season with Tucson, Dineen is seeing time, and capitalizing, in areas like the three-on-three open-ice overtime situations, as well as on the power play. This is the first time with the Roadrunners he’s been used heavily in that manner.

“He’s definitely a player that looks bigger (this year) because I think his confidence is growing,” Potvin said of the third-year defenseman, a Coyotes third-round draft pick in 2016. “The biggest thing for him is accepting the boredom of consistency.

“He comes every day, and is the exact same human being, and tries to do the right things. And, two years later, it’s evident he’s been able to develop his game that way. He’s just so reliable.”

The Roadrunners have dealt with a handful of scheduling concerns already in their short season.

This time of year, the Tucson Roadrunners are typically packing their bags.

For third-ranked Arizona Wildcats, it's good to be home — and warm — following Austin fiasco

The third-ranked Wildcats will properly open their season on Friday. Arizona takes on Southern Utah at 3 p.m. and New Mexico at 6 as part of the Hillenbrand Invitational.

The NHL’s Arizona Coyotes reassigned defenseman Kyle Capobianco, the most prolific scoring blueliner in Tucson history, and forward prospect Barrett Hayton to the AHL this week.

Tucson h-o-t in OT; ‘I think it just shows the character of our team’

News and notes as the Roadrunners prepare to take on Texas at Tucson Arena Wednesday night.

Roadrunners blown out by Texas Stars in return to Tucson Arena

The Roadrunners (5-3-0-0) showed some late-game urgency, but goals by  forwards Lane Pederson and Kevin Roy 74 seconds apart weren't enough to overcome the Stars (5-3-0-0)

Lieb said he’s taken his role just as seriously this season even with so few around to hear him.

One step forward, two back for Roadrunners in 6-2 home loss to Ontario

Tucson loses Wednesday for eighth time in 10 games after 4-0 start to the season.

Lane Pederson slides the puck up the ice during a Feb. 7 game against San Jose at Tucson Arena. The teams’ three-game weekend series has been postponed due to COVID-19 issues.

Roadrunners Cam Dineen gloves a flying puck in front of San Antonio Austin Poganski in the third period of their AHL game at the Tucson Convention Center, Tucson, Ariz., Oct. 19, 2019.