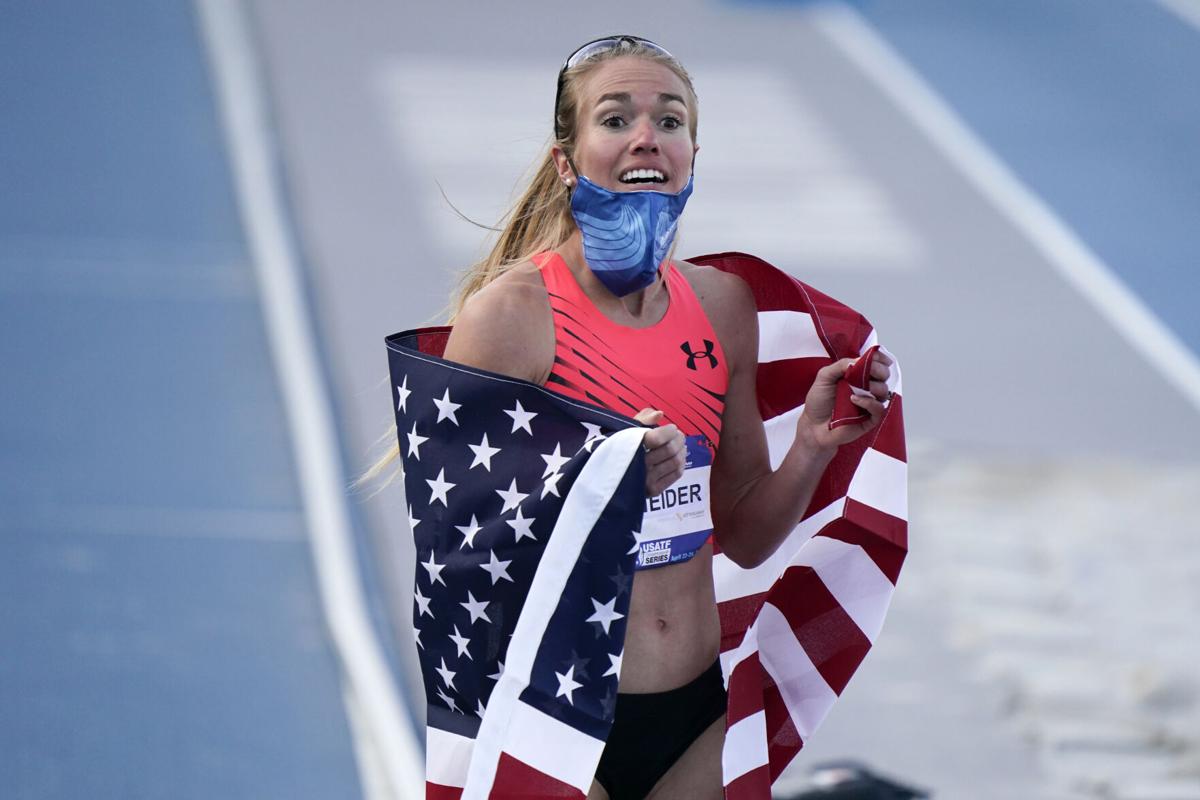 Rachel Schneider celebrates after winning the women’s USA Track & Field 1-Mile Road Championship at the Drake Relays in April. Schneider has qualified for the Olympics in the 5,000 meters. 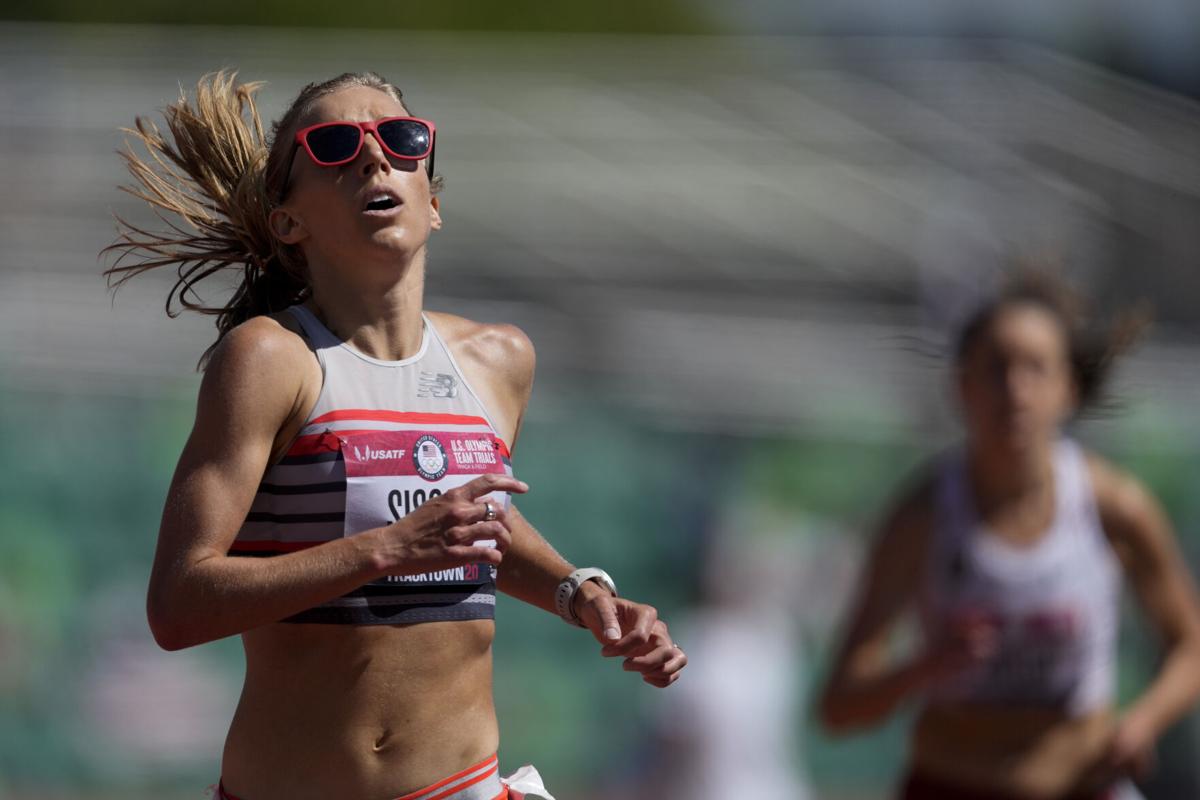 PHOENIX — During a heat wave in Oregon, two runners who are used to scorching temperatures secured their spots in the Olympics.

Schneider moved to Flagstaff full-time five years ago after falling in love with the city when she went there to train in high altitude. Flagstaff is a highly sought after altitude training destination for runners. Sisson travels there for long stretches each year for that purpose.

She relocated after years of spending winters in Phoenix to avoid the Rhode Island cold. After finding the right chiropractor in Chandler, her husband suggested they make Phoenix their home base since they were spending so much time in Arizona anyway.

“I do think living and training and Phoenix prepared me probably a bit better,” Sisson said of the heat during the Olympic Trials. “I kind of knew what to expect probably more than maybe some other runners since it was pretty hot all last year.”

Sisson dreamed of going to the Olympics since she finished college. She was injured in 2016 then ran badly in the 2020 marathon team tryouts, so this year gave her another chance. After the heartbreak of not qualifying last year, Sisson said she is proud to be representing the United States in 2021, especially considering the depth the country has in track and field.

“They’re sending an amazing team and there’s amazing, amazing athletes being left off the team,” she said. “That’s one of the most incredible things about the United States … we could fill our Olympic team probably three or four times over with phenomenal, competitive athletes.”

Schneider credits her “amazing team of physios” for what she calls the best months of training of her life because they’ve kept her body healthy, enabling her to focus on the mental and physical strategies she and her coach, Mike Smith, who is also her fiancé, developed.

Focusing on the mental strategy meant Schneider entered the race feeling happy and prepared. She knew however things ended, she would be proud. When she crossed the finish line third, qualifying for the Tokyo games, her family was there to greet her.

“Getting to do that victory lap and give my family and my fiancé and some of my friends these big hugs after is a moment I’ll never forget,” Schneider said.

Schneider’s whole family, from her parents to her three siblings to her toddler nephew, went to Oregon for the Olympic Trials because they knew they wouldn’t get to go to Tokyo if she qualified.

Rachel’s sister, Kathy, jokes that she was Rachel’s first track coach. Being six years older meant Kathy coached Rachel at the local recreational program in their hometown in Maine. That support extends to their adult lives with Kathy moving to Flagstaff this year to be close to Rachel.

They went from a 10-hour driving distance to living 15-minute drive apart. Kathy said Rachel keeps saying even the 15 minutes is too long.

“My family has been my closest people, my biggest supporters, my biggest encouragers throughout my entire life,” Rachel said. “That has just been like the biggest, biggest silver lining of the pandemic … having my sister and my brother-in-law and my nephew move to Flagstaff and getting to spend so much time with them.”

Though she described pushing everything back a year as hard, Schneider said another upside to the pandemic-driven postponement was how she used the time to improve her mindset.

Schneider is in graduate school for clinical mental health counseling online at Grand Canyon University because of her passion for psychology and desire to help others live life with more connection and joy. In terms of her athletic pursuits, Schneider said focusing on the mental side has helped her stay in touch with her purpose as a runner: to be the best version of herself.

Kathy noted how Rachel’s mental work helped her solidify her physical progress in pursuit of that purpose.

“Going in with that confidence has been a really important step for her these past few years,” Kathy said.

Similarly to Schneider, Sisson loves to challenge herself to do more. Challenging herself to reach personal goals she sets for herself as a runner is her favorite part of the sport.

Sisson also loves distance running because it lets her showcase her strength. The grind keeps her motivated.

“She is a natural distance runner,” said Sisson’s coach, Ray Treacy. “She doesn’t leave any stone unturned in doing all the right things to be prepared correctly for our workouts, for our training on a daily basis and races as well. She’s very focused on what she needs to do to become the best athlete you can be.”

Treacy has been Sisson’s coach since 2011 when she came to Providence College, where he is the director of cross country and track.

Both Sisson and Schneider credit their college experiences for their continued athletic careers with Sisson still being coached by Treacy and Schneider meeting Smith in Washington D.C. when she went to Georgetown.

Now, they’ll both continue their careers in Tokyo. The two expressed that navigating the extensive COVID-19 protocols is a priority because they don’t want to jeopardize their Olympic experience by not checking one of the necessary boxes.

Schneider and Smith are hoping Smith will be allowed to attend the Olympics but Sisson knows Treacy won’t be attending. That doesn’t worry her.

The two already have a long-distance coaching relationship with Treacy in Rhode Island and Sisson in Arizona. For them, communicating over phone and text, as many athletes will have to do because of COVID-19 restrictions meaning not every coach can attend the Olympics, is the norm.

“With a lot of athletes, they’re used to seeing their coaches all the time whereas I’m not and we know how to make it work,” Sisson said. “I know what kind of feedback I need to give him and things like that so it actually probably is an advantage.”

Treacy believes their tenure in person at Providence means Sisson knows his system, so he echoed her lack of concern, saying one of Sisson’s strengths is her independence.

“She’s very single-minded,” he said. “That’s why a situation like this works.”

Kathy said the same about Rachel. Though Rachel and Sisson know each other and train with other athletes in Flagstaff, distance running is, at the end of the day, an individual event.

“She would hate that I would say that she’s done this on her own, because I know it takes a village, but she doesn’t really have that team to push her,” Kathy said. “She’s done a lot of mental and physical pushing on her own. That, to me, is just even more impressive than anything.”

Though the two are self-motivated, both rely on their partners to help them train.

Sisson and her husband, Shane Quinn, met at Providence College. He ran there, too, but stopped after finding fulfillment in mental health counseling. He started running again to give Emily company in her training. The couple has two dogs.

Rachel and Smith have three dogs. While there were some challenges that came with Smith serving as her coach and being her fiancé, at the end of the day Schneider knows the positives outweigh the challenges.

“We’re just in it together on so many levels and getting to work together on our passions but then also be partners and see each other in all these different ways through life is really special,” she said.

In the run-up to Tokyo, Sisson is training in Rhode Island because she and Treacy hope the humidity there will be more comparable to the humidity in Tokyo.

Schneider will enter Tokyo with the same mindset she used during the Olympic trials: focusing on running the race in a way that will make her proud regardless of the outcome.

“I’ve been really good at listening to my heart, or my gut, ever since I was really young,” she said. “As long as I’m in tune with what my heart is saying then my purpose is pretty clear to me and I’m pretty dialed in with why I’m doing what I’m doing.”

Olympian Tom Daley knits while watching in the stands in Tokyo

Olympian Tom Daley knits while watching in the stands in Tokyo

Paul news has Suns fans in frenzy about ‘cursed’ franchise

Some believe the team is cursed because of the bad luck that has come its way. Other fans have learned not to feel too good about success, fearing that heartbreak lurks just around the corner.

This will be Taurasi’s fifth Olympics. Since 2004, she has played in all 32 games and has started in the past 24, bringing home four gold medals.

The former Pima College and Arizona Wildcats standout and longtime Tucson resident is competing in his fifth Olympics. The men’s marathon is scheduled for Aug. 8 in Sapporo, Japan.

Friday morning’s opening ceremony marked the official start of the Tokyo Olympics, which will run through Aug. 8, and a plethora of former Arizona Wildcats and Tucson natives will represent their respective countries.

Rachel Schneider celebrates after winning the women’s USA Track & Field 1-Mile Road Championship at the Drake Relays in April. Schneider has qualified for the Olympics in the 5,000 meters.