This year’s NFL draft won’t feature commissioner Roger Goodell announcing the picks from the luxury of his own living room with a giant jar of M&M’s next to him slowly emptying as the first round progresses, but hey, at least an on-site draft is a sign of normalcy?

The draft will take place Thursday through Saturday in Cleveland.

Fortunately, we already know how the first round will play out. The Star’s Michael Lev, Ryan Finley, Justin Spears and Alec White held a mock draft this week. Here’s how Thursday’s picks will go down:

White says: This pick was set in stone the moment the Jets beat the Rams back in December and clinched the No. 1 pick for the Jags. Lawrence is one of the best QB prospects of the last 20 years and is the no-brainer pick for new coach Urban Meyer.

Finley says: The Jets see something Burrowesque in Wilson, who — like last year’s No. 1 overall pick — developed from mistake-prone to unstoppable while in college. Wilson threw for 3,692 yards and 33 touchdowns last season at BYU, but the Cougars played only two games against ranked teams — and lost one of them. This is a risk.

Lev says: This is not expected to happen. All the chatter has been about Alabama QB Mac Jones. But Jones is a high-floor, low-ceiling prospect. Is that the type of player you give up multiple future picks to select? Fields has size, speed, a powerful arm, toughness, leadership skills and a higher upside. He’s the prototypical modern QB.

Spears says: Falcons general manager Terry Fontenot said earlier this week Atlanta is in a “difficult cap situation” and will “listen” and “weigh” the possibility of trading All-Pro wide receiver Julio Jones. Should Atlanta move Jones to clear cap space, why not draft one of the most explosive, big-bodied playmakers in college football? Unless the “Dirty Birds” believe Trey Lance is the future of the NFL, Atlanta will give Matt Ryan another year under center — and give him a new toy in the offense.

White says: Lots of debate here between Chase and Oregon offensive lineman Penei Sewell, but pairing Chase with his college QB is too enticing to pass up. During Burrow’s Heisman year and LSU’s run to the national championship in 2019, Chase averaged 127 receiving yards per game and caught 20 touchdowns.

Lev says: I had decided to take the best pass catcher available after Detroit parted ways with Kenny Golladay and Marvin Jones Jr. Was hoping Chase or Waddle would be here. Thought long and hard about Oregon OT Penei Sewell. If Smith is the consolation prize, Lions fans will be happy. The undersized playmaker absolutely dominated the SEC in 2020.

Spears says: Carolina found its quarterback of the future — maybe — in Sam Darnold. Now they need a boost in the secondary. Surtain was targeted 48 times in his final season at Alabama, but allowed just 21 receptions (44%) and was named SEC Defensive Player of the Year. When in doubt, pick the Alabama guy.

White says: The Broncos need to have one of either Lance or Fields available at No. 9 to feel confident in taking a QB. Would have loved to grab Fields with this pick, but Lance is an intriguing option with a big arm and play-making abilities.

Finley says: The Cowboys couldn’t block anyone last season, and as a result, Dak Prescott’s ankle exploded and Ezekiel Elliott finished with a career low in rushing yards. Sewell, a top-five pick in terms of talent, is a no-brainer.

Lev says: The Giants have invested heavily in skill-position players (QB Daniel Jones, RB Saquon Barkley), and so it makes sense to continue to surround them with talent. Slater opted out of the 2020 season, but tested extremely well and can play multiple positions. Another meat-and-potatoes pick for old-school GM Dave Gettleman.

Spears says: Philly could go a number of directions with this pick, but will address their inconsistencies in the defensive secondary. Horn is an aggressive cornerback known for his ability to press wide receivers at the line of scrimmage. He also ran the 40-yard dash in 4.4 seconds.

White says: The Chargers grab a Pac-12 offensive lineman. The 6-foot-4-inch, 315-pound Vera-Tucker can play from Day 1 in the NFL. He is a much-needed protection upgrade for the blossoming talent that is Justin Herbert.

Finley says: Pro Football Focus gave Darrisaw the highest rating of any Power 5 offensive tackle in 2020. Good enough for me — and for the Vikings.

Lev says: This probably won’t happen. New England is a strong candidate to trade up for a QB or down for more picks. But if it should fall this way, the Patriots have to act. Jones doesn’t have as much upside as the other QBs. But Bill Belichick, as evidenced by his earlier offseason moves, is in win-now mode. Jones can start right away.

White says: Parsons has the talent to be selected in the top 10, but a lack of experience makes this a risky pick. The flashy 6-3, 246-pound linebacker was an All-American selection in 2019 and the Big Ten linebacker of the year. However, he opted out of the 2020 season at Penn State and has only started 13 games in his college career.

Finley says: It’s another Alabama player for the Dolphins, who have a major need at running back after finishing 22nd in rushing yards per game last season.

Lev says: Washington is another candidate to move up for a quarterback; Lance would be a perfect fit as Ryan Fitzpatrick’s understudy. But getting from No. 19 to, say, No. 7, is a tough ask. So I turned my attention to offensive tackle, another major team need. Jenkins isn’t a classic left tackle, but he was the last first-round tackle available.

Spears says: Bateman shifted inside and caught 36 passes for 472 yards in 2020. Whether Bateman is a slot or outside receiver in the pros, he’ll make an immediate impact in Chicago alongside Allen Robinson and Darnell Mooney.

White says: The Colts were a top-10 defense for all of 2020 and made one of the bigger gambles of the offseason by trading for Carson Wentz after Philip Rivers retired. Owusu-Koramoah makes a lot of sense with edge rusher Justin Houston gone due to free agency.

Finley says: The guy who cost Ole Miss a 2019 rivalry game by pretending to pee in the end zone following a touchdown catch, Moore has matured into an elite player. He averaged 149 receiving yards and exactly one TD per game in 2020.

Lev says: With Wilson in the fold, I took a best-player-available approach while also keeping team needs in the back of my mind. Ojulari checks both boxes. He’s a little undersized at about 6-2, 249, but has long arms and was extremely productive in the SEC (12.5 TFLs, 8.5 sacks, 4 FF). He also hasn’t turned 21 yet.

Spears says: Ben Roethlisberger needs as much protection as possible if Pittsburgh’s offensive core of Juju Smith-Schuster, Chase Claypool and Eric Ebron want to thrive. At 6-4 and 315 pounds, Bateman has the size and versatility to play anywhere on the O-line.

White says: Something about reuniting dynamic offensive players with their college QB just feels right in this draft. Etienne is a perfect third-down complement to James Robinson, who rushed for over 1,000 yards last season.

Lev says: Given the Ravens’ history, it seems likely that they’ll trade back with at least one of their two first-rounders. But with no such option available, I targeted the best edge rusher left. I had considered Phillips for the Jets at 23. He has everything you could want from a physical standpoint — aside from durability. Past concussions remain a concern.

Spears says: Do the Saints ramp up the competition to replace Drew Brees by drafting a quarterback at No. 28? We don’t believe so. Oweh was one of the top edge rushers in college football, and oozes potential with his 6-5, 257-pound frame. Pairing him with Cameron Jordan could make the rival Falcons wish they had drafted Sewell instead of Pitts.

White says: The Packers’ annual refusal to help Aaron Rodgers in the first round stops now. At just a shade under 6-foot-3, Marshall Jr. can line up on the outside opposite Davante Adams and be the reliable secondary receiving option that Rodgers been clamoring for.

Finley says: Little got hurt in Stanford’s 2019 opener, missed the rest of the season, then opted out of 2020. Otherwise, he’d be a top-half-of-the-first-round pick. Buffalo gets great value at No. 30.

Lev says: The Ravens need to keep Lamar Jackson in one piece, and they need to replace Orlando Brown. I was hoping a tackle would fall here, but that didn’t materialize. Baltimore never panics, though. In Dickerson, the Ravens get a plug-and-play center who can make Jackson better. As with Phillips, durability is a bit worrisome.

• What: NFL Draft, first round

Penei Sewell, who opted out in 2020, is expected to be the conference’s only top-10 pickc

On the eve of the draft, we do have some sleepers for you — five players whose NFL careers are likely to exceed their draft position.

The Falcons are open to trading Julio Jones.

The Miami Dolphins shipped away another one of the team’s major free-agent signings of 2020, sending former Miami Hurricanes standout Ereck Flowers back to the Washington Football Team, according to a league source.

Dan Wiederer: The Chicago Bears are looking to draft a quarterback again. But a lot has changed from 2017 — from their starting position to input from the coaching staff.

Matt Bushman suffered a devastating injury, then became a dad; Saturday, he could get drafted 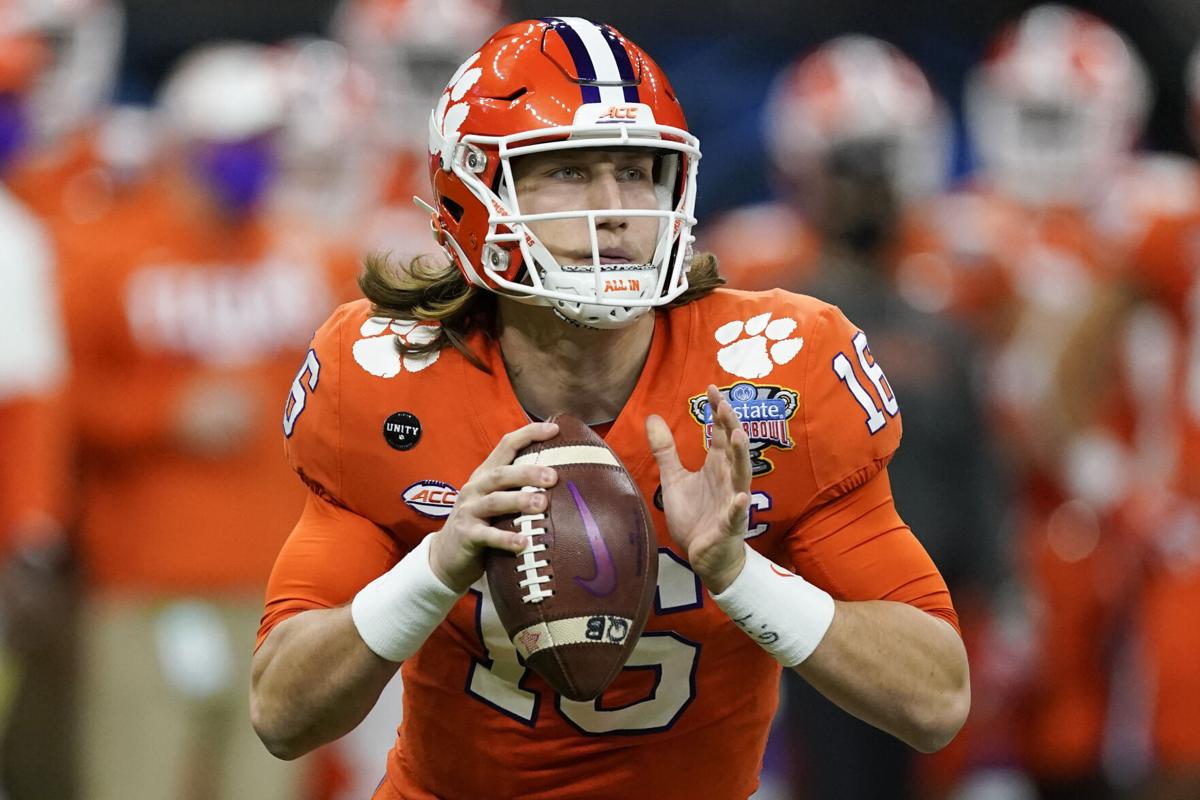 Clemson quarterback Trevor Lawrence is widely expected to go No. 1 overall to the Jacksonville Jaguars. 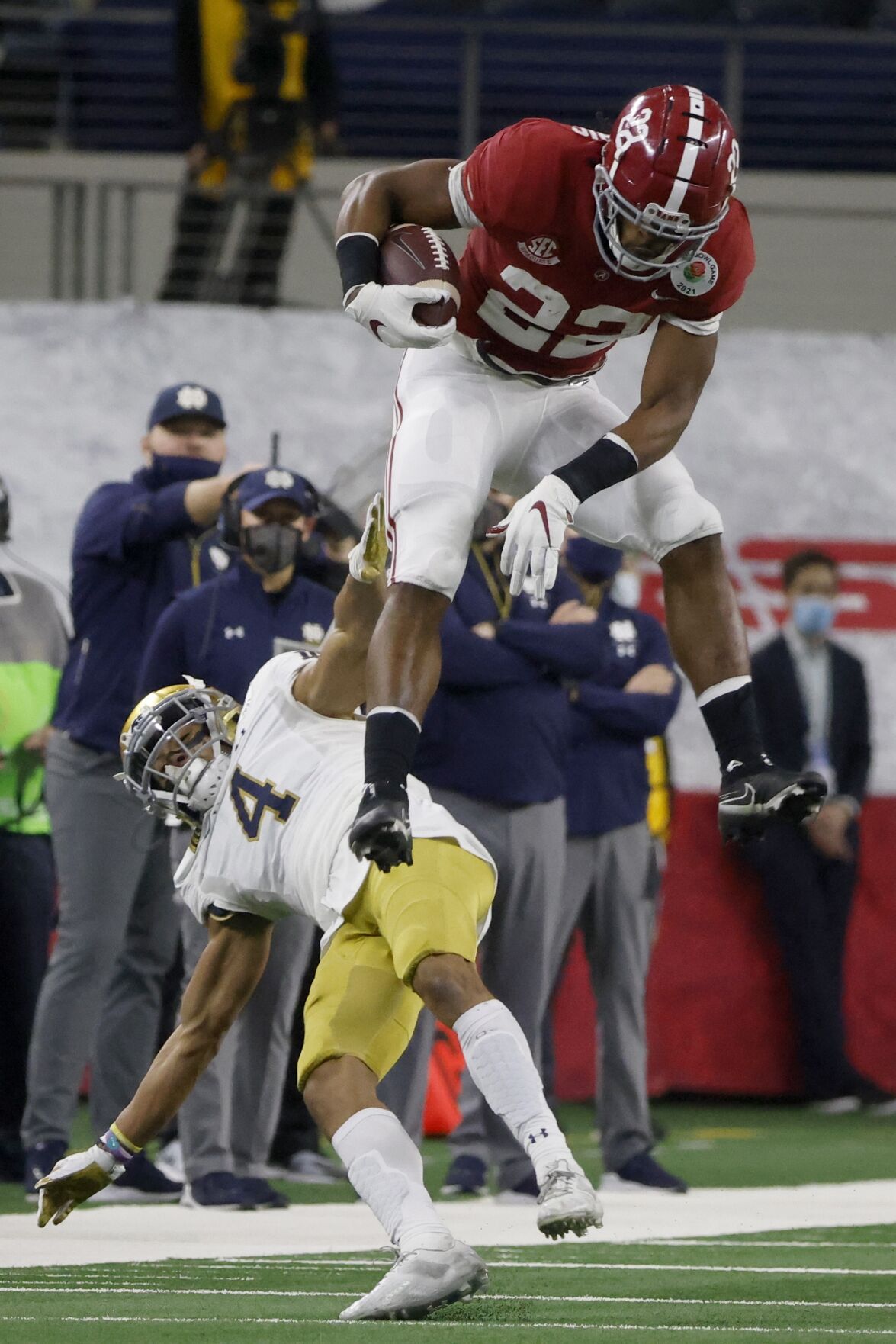 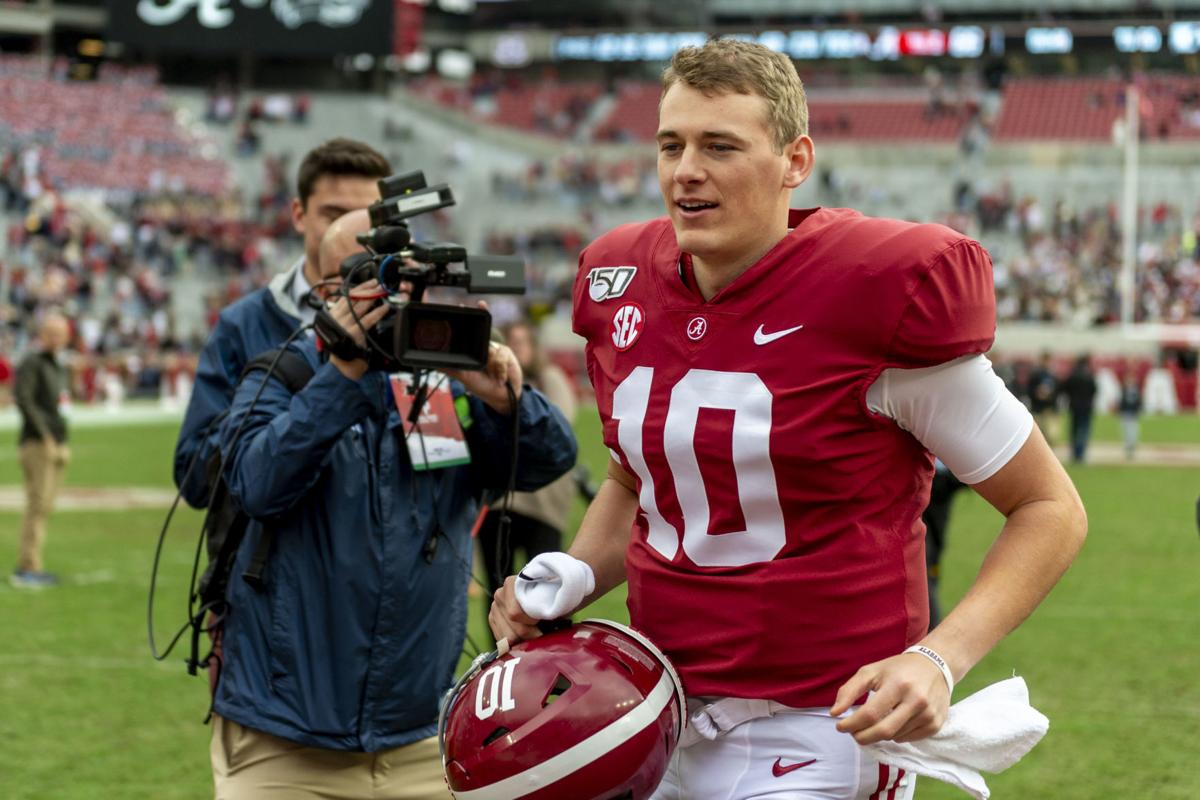 Alabama quarterback Mac Jones jogs off the field after defeating Western Carolina on Saturday in Tuscaloosa, Ala. 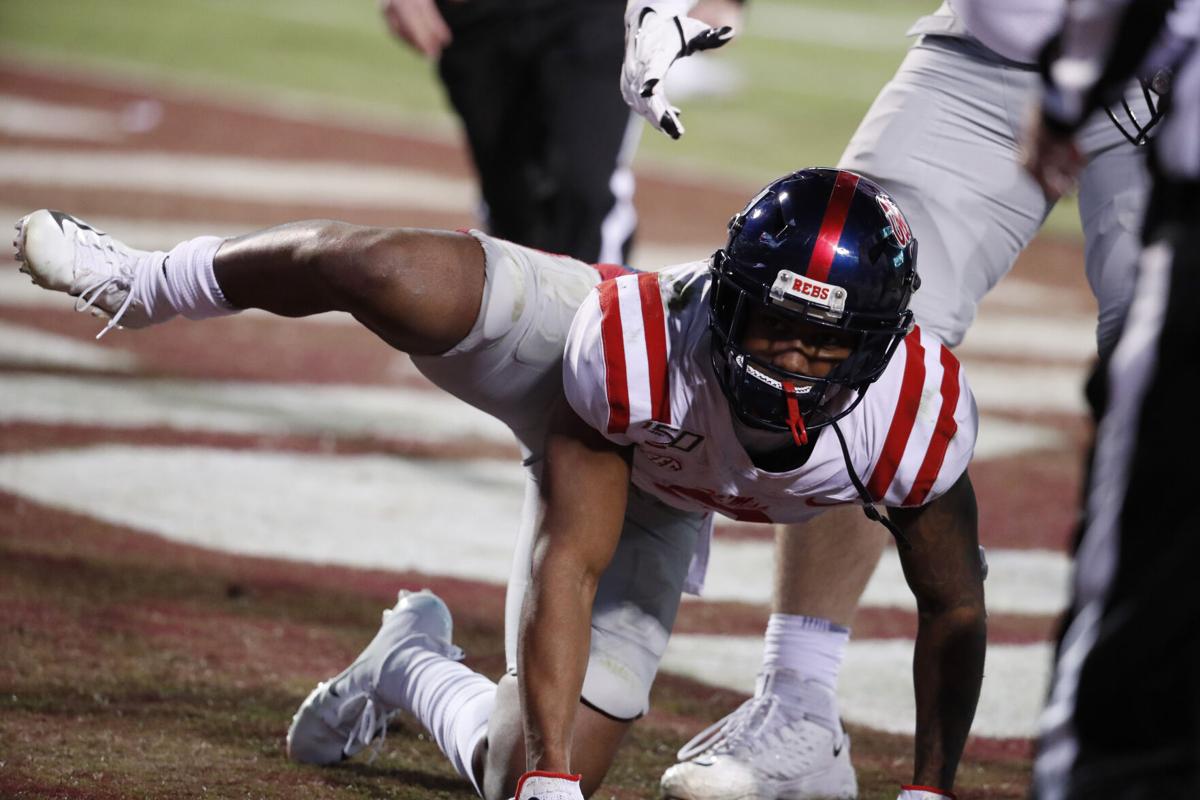 Mississippi wide receiver Elijah Moore (8) reacts following a touchdown by his team against Mississippi State during the second half of an NCAA college football game in Starkville, Miss. 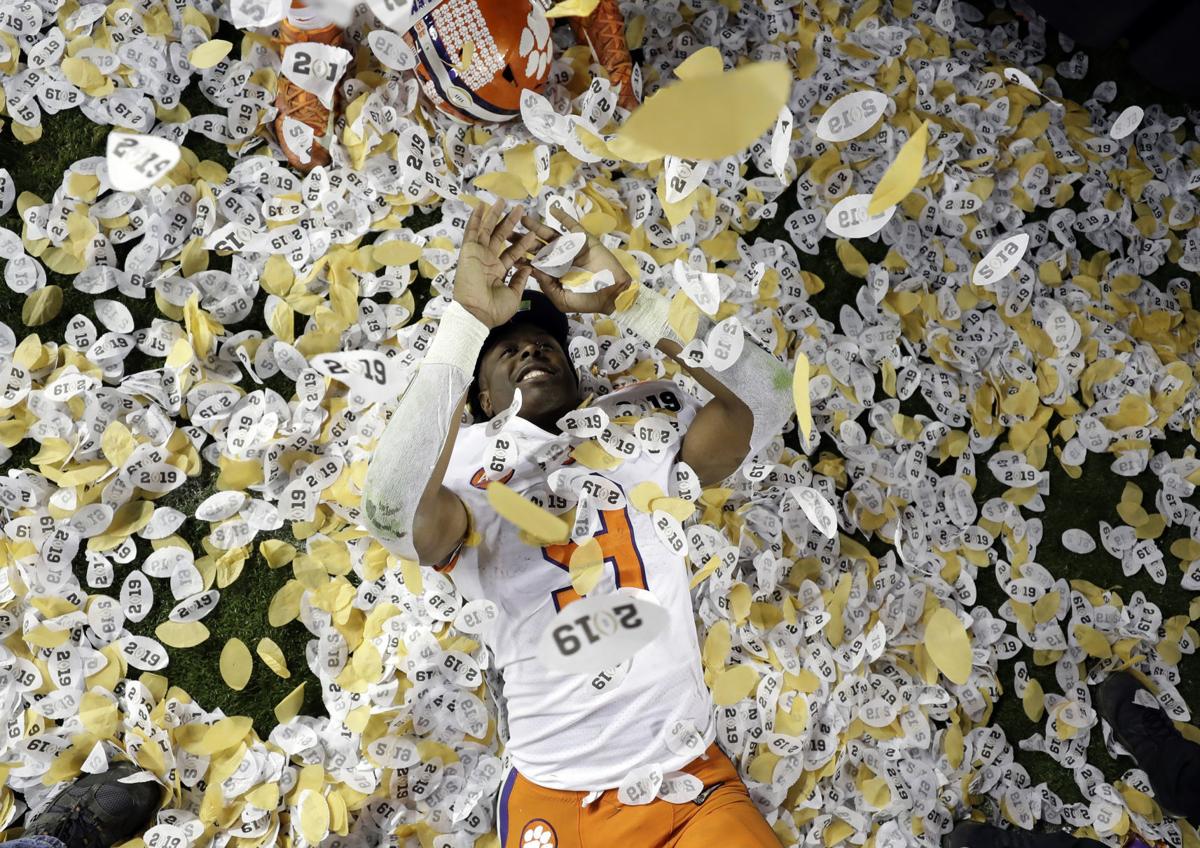 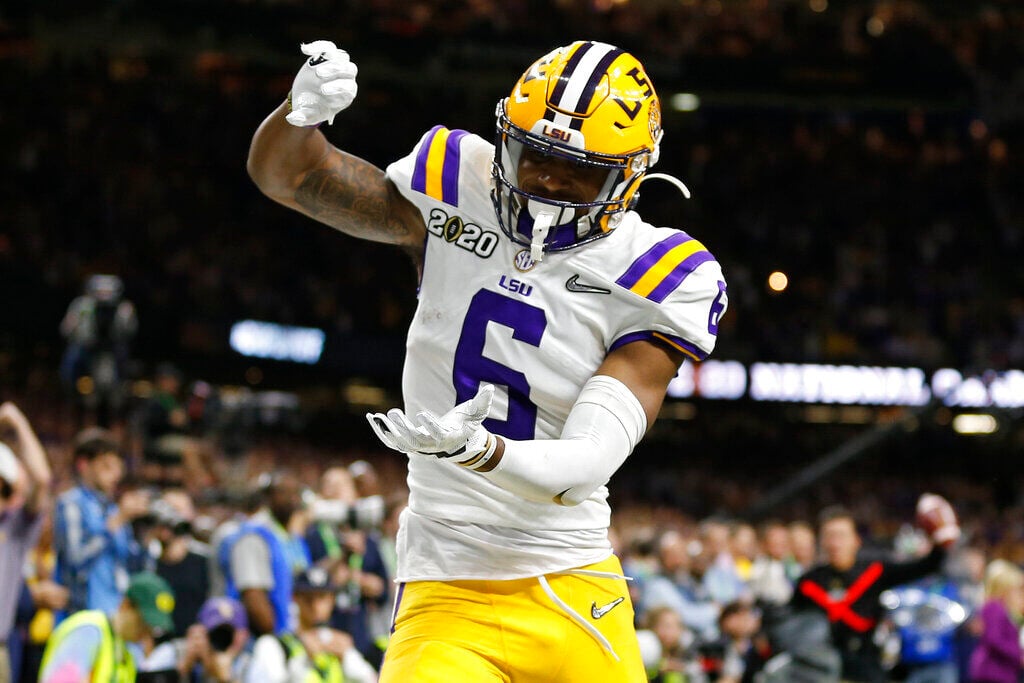