Dear Mr. Football: Do UCLA students have to run a marathon to attend Bruins football games?

A: Believe it or not, the distance from the UCLA campus to the Rose Bowl is 26.2 miles, the exact distance of a marathon. It is by far the largest trek from a campus to a FBS football stadium.

It’s not an ideal arrangement for any of them. Can you imagine if Arizona played 26.2 miles from campus? That would be somewhere near Walden Grove High School in Sahuarita.

A: Absolutely. The Bruins are 8-1 and ranked No. 9 but average 36,241 fans per game at the Rose Bowl this year, ninth in the Pac-12. Part of it was they opened at home in a heat wave, day games against bad opponents Bowling Green, South Alabama and Alabama State, none of which drew more than 33,727 fans.

The other part is that since UCLA moved out of the Los Angeles Coliseum in 1980 and began to play at the Rose Bowl, they’ve only averaged 60,000 fans per game in six seasons. It’s so inconvenient to get to Pasadena. The traffic is awful, the parking is worse and the Rose Bowl isn’t anywhere near one of the most feared road venues in Pac-12 football. It’s more of a wine-and-cheese crowd.

Although, with the possibility of a spot in the College Football Playoffs as an inducement, that could change for 3½ hours Saturday night against Arizona.

Dear Mr. Football: Why didn’t UCLA ever build a stadium on campus?

A: It last attempted to do so in 1965, planning a 44,000-seat stadium adjacent to Pauley Pavilion. Those plans, however, went bust when residents in high-brow neighborhoods such as Beverly Hills, Bel Air and Holmby Hills exerted political pressure on Gov. Pat Brown, a “not in our backyard” move that worked.

Instead, UCLA built 11,000-seat Drake Stadium, a track facility, on the site. Students also opposed the football stadium because they would have been charged student fees to help pay for the $6.5 million stadium.

I’ve attended 11 of Arizona’s games at the Rose Bowl over the last 40 years and the largest crowd was 66,156 (or about 30,000 empty seats) in 1993, when the No. 15 Bruins beat the undefeated and No. 7 Wildcats 37-17 on a day Arizona QB Dan White was injured and didn’t play. On most other occasions, playing in the Rose Bowl on a day that isn’t Jan. 1, has been a mostly underwhelming game-day experience.

Dear Mr. Football: Does Arizona play the most difficult schedule in college football?

A: At his Monday Q&A, UA coach Jedd Fisch opened by saying: “I don’t know if this is normal or not, to play four teams in the Top-10 in the last five weeks, (I’m) not sure if anyone else in the country has done that.”

The answer: no one in Power Five football can match the difficulty of Arizona’s five-game ordeal against (then) No. 12 Oregon, No. 10 USC, No. 12 Utah and No. 9 UCLA. The only unranked team, Washington, is now ranked No. 24.

Tennessee played then-No. 3 Alabama, unranked Tennessee-Martin, No. 19 Kentucky, No. 1 Georgia and No. 25 LSU. Their combined record today is 34-11.

If you’re building in Year 2 like Fisch is, a ridiculously difficult schedule is the last thing you want to encounter.

Dear Mr. Football: Is this the most difficult regular-season schedule in UA history?

Dear Mr. Football: What’s the most memorable Arizona game at UCLA ever?

A: In 1982, Arizona appeared to have beaten the No. 8 Bruins on a Max Zendejas field goal with 33 seconds to play. But the Bruins completed three desperation passes to set up a tying field goal with three seconds remaining. The game finished 24-24.

The remarkable thing about that ’82 game is how Smith used so many Tucson players to tie the mighty Bruins. Zendejas’ go-ahead field goal was set up by an interception from linebacker Cliff Thorpe, a walk-on from Canyon del Oro High School. Thorpe was typical of Smith’s teams, in which he seemed to do the most with the least.

Thorpe, now vice president of the Van Gorp Corp., in Iowa — a mechanical engineering operation — was part of the 1980 All-City football team that included 12 players who signed Division I scholarships. That’s unheard of today.

This is just the start of what could be an Arizona bowl team by 2024. Beating the No. 9 Bruins at the Rose Bowl is probably a bridge too far.

Jedd Fisch is hopeful that Arizona can emulate the trajectory of this week’s opponent, UCLA, which has risen steadily under Chip Kelly.

Class 4A-6A finishes its regular season, while 2A and 3A cut down to four teams.

For subscribers: The Star's longtime columnist on the passing of a UA legend, Blake Martinez's retirement and a Wildcats baseball reunion for the ages.

For Star subscribers: The latest class features several big names that have a made an impact in sports here. 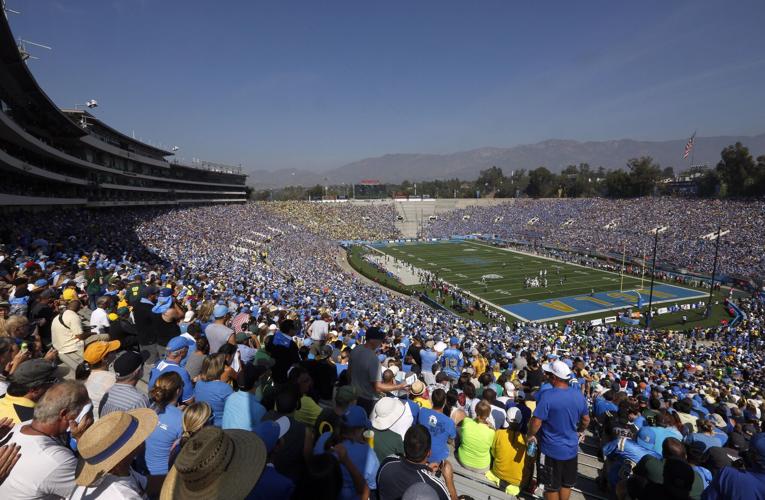 To reach the Rose Bowl in Pasadena, UCLA’s students have to travel further than any in the country — 26.2 miles — to watch home football games. 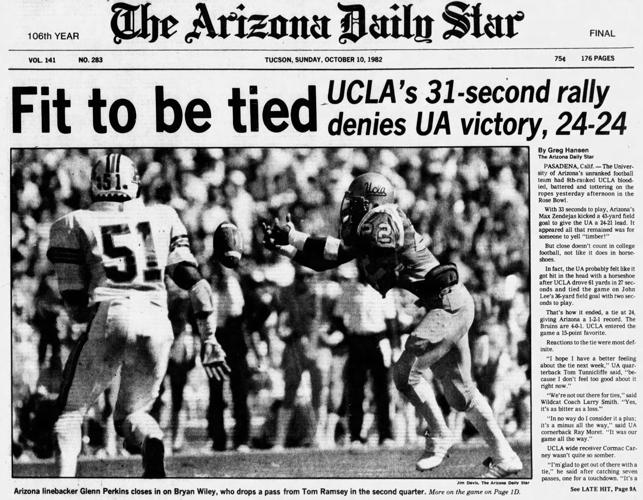 UCLA rallied in 31 seconds to forge a tie with the Wildcats in 1982.