DALLAS — Devin Booker doesn’t need much to get him going.

Booker didn’t receive a first-place vote and only gathered one second-place vote as did Mavs All-Star Luka Doncic. He totaled 216 points and Doncic finished fifth in the MVP voting with 146.

While the top three vote-getters were expected, Booker placing fourth will put him in the NBA MVP conversation at the start of next season as opposed to making a late entry at the end of the season like this year.

He checked the boxes for MVP consideration.

The Suns won a league-best 64 games this regular season with Booker averaging a career-best 26.8 points a game to lead them in scoring.

The three-time All-Star averaged five rebounds, 4.8 assists to 2.4 turnovers and a career-high 1.1 steals in the regular season. Booker averaged fewer than three turnovers for the first time since his rookie year in 2015-16.

Booker has proudly said the arrival of Chris Paul changed the “trajectory” of his career, but how he played when Paul missed 15 games after fracturing his right thumb put him in the MVP conversation.

The Suns went 11-4 without Paul. Booker played in 11 of those games as he missed four in NBA’s health and safety protocols.

In those 11 games, Booker averaged 28.1 points on 52% shooting, seven assists and 4.6 rebounds. He shot 31 of 77 from 3 and just missed six free throws out of 59 attempts. Booker’s an improved defender as evidenced by his career-best 1.1 steals per game.

The Suns had a historic season in setting a franchise record for overall wins (64) and road victories (32) in a single season. They went an NBA-record 47-0 in the regular season when leading after three quarters.

Booker played a major role in those numbers.

So, starting next season, he won’t have to wait in line to join the MVP conversation.

Booker will be right there with Jokic, Embiid, Antetokounmpo and Doncic.

The Suns used a huge third quarter to turn a tight game into a comfortable win. 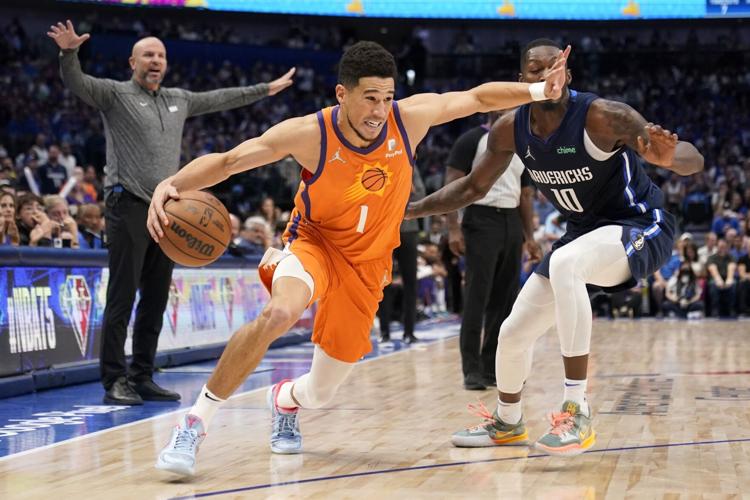 Suns guard Devin Booker drives to the basket past Mavericks forward Dorian Finney-Smith during the first half of Sunday’s game. Booker finished fourth in the NBA’s Most Valuable Player voting. 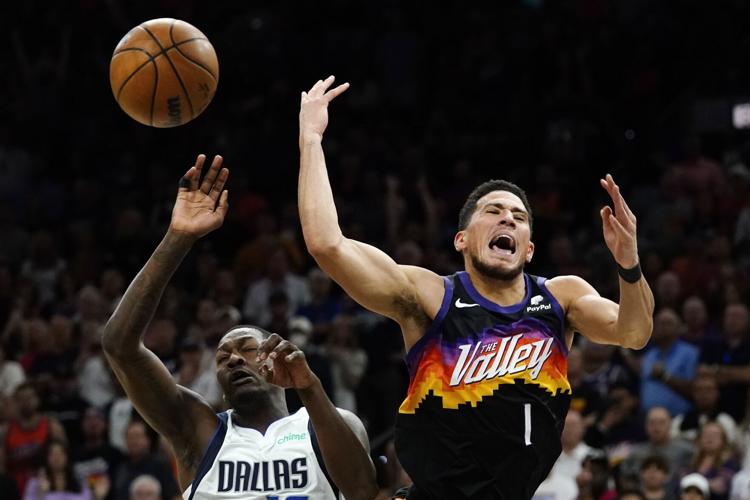 Suns guard Devin Booker, right, gets fouled by Mavericks forward Dorian Finney-Smith, during the second half of Tuesday’s game.