The two regular-season games between Milwaukee and Phoenix this season fit the same script. Both were extremely high scoring. Both went down to the wire. Both saw Phoenix win by a single point, with a free throw by Devin Booker ending up as the game-winner each time.

There was also this: Giannis Antetokounmpo couldn’t be guarded in either game.

And now, it’s the Bucks and Suns — forever tied together after Milwaukee won a 1969 coin flip after the teams’ first seasons for Lew Alcindor — in the NBA Finals, with Antetokounmpo’s status a major question.

The NBA’s title series is set: Game 1 between the Bucks and Suns will be in Phoenix on Tuesday night, the last matchup of this compressed season that navigated its way through the coronavirus pandemic, players and coaches testing positive for COVID-19, and a slew of injuries to some of the game’s biggest stars — Antetokounmpo and Phoenix’s Chris Paul included.

Paul is back, set to play in the NBA Finals for the first time in his career.

Antetokounmpo can only hope to be that fortunate.

The two-time NBA MVP averaged 40 points on 60% shooting against the Suns this season but hyperextended his left knee during Game 4 of the Eastern Conference finals against Atlanta.

The Bucks went 2-0 in the two full games that Antetokounmpo missed to win that series in six games, finishing it — and earning the team’s first finals berth since 1974 — with a 118-107 win on the Hawks’ home floor on Saturday night.

Milwaukee getting to the finals means USA Basketball will be more than a bit short-handed when it starts Olympic training camp in Las Vegas on Tuesday. The U.S. has a 12-man team for the Tokyo Games — and three of those 12, the Suns’ Booker and Milwaukee’s Khris Middleton and Jrue Holiday — will be otherwise engaged for the next few days.

Game 7 of the NBA Finals, if the series goes the distance, is July 22. The Olympics open July 23 and the first U.S. game in Tokyo is July 25 against France. USA Basketball will arrange to get Booker, Middleton and Holiday to Tokyo as quickly as possible if the American team leaves for Japan while the finals are still happening.

“It could be worse,” USA Basketball managing director Jerry Colangelo said. “I guess one option is we’re going to have nine players for the first game against France. That’s the worst-case scenario.”

No player on either team has ever won an NBA championship. Jae Crowder went to the finals last season with Miami, then chose to sign a three-year deal with Phoenix last summer.

“I knew our potential,” Crowder said. “I knew where we could get to, the level of basketball we could play, when I first got here. I just knew it was a special group. I knew we had a chance to do something special.”

The Suns indeed have that chance.

One of them is only four wins from hoisting the Larry O’Brien Trophy.

All eyes on Giannis

ATLANTA — The Bucks proved they were good enough to wrap up the Eastern Conference finals without their best player.

Now the Bucks face a quick turnaround before Game 1 of the NBA Finals, and it’s not known if that will leave Antetokounmpo sufficient time to recover.

“We’ll update it when appropriate. The conversations between he and myself, it’s kind of private and we’ll see where he is each day.”

Budenholzer said he was impressed with the resiliency the Bucks showed in winning back-to-back games without Antetokounmpo, the two-time MVP.

Antetokounmpo remained on the Bucks’ bench and was so animated, sometimes moving onto the court as he communicated with his teammates, that Budenholzer said he feared the star might draw a technical foul.

Who: Bucks at Suns, Game 1 of NBA Finals

The Star's longtime columinist writes about why NCAA athletes deserve to earn money off their name, a tragic death by a Desert Swarm member and why there shouldn't be a rush to find Jay Johnson's replacement.

The Star's Greg Hansen is counting down the 100 top sports figures in Tucson history. Up next: No. 58, Lacey Nymeyer John.

The UofA diver will compete for the United States in the Olympics in the 10-meter synchro and the 10-meter platform.

'It helps keep everything bright for you': Pandemic led to running resurgence in Tucson

A recent survey of nearly 4,000 runners showed that 29% started during the pandemic.

Tampa Bay on cusp of repeating as Stanley Cup champs

Lightning is up 3-0 on Canadiens heading into Monday's Game 4 in Montreal.

San Francisco wins 5-2 Sunday night to take three of four games in the series in Phoenix over the D-backs, who are now 23-63.

Bucks, Suns set for the NBA Finals after long waits 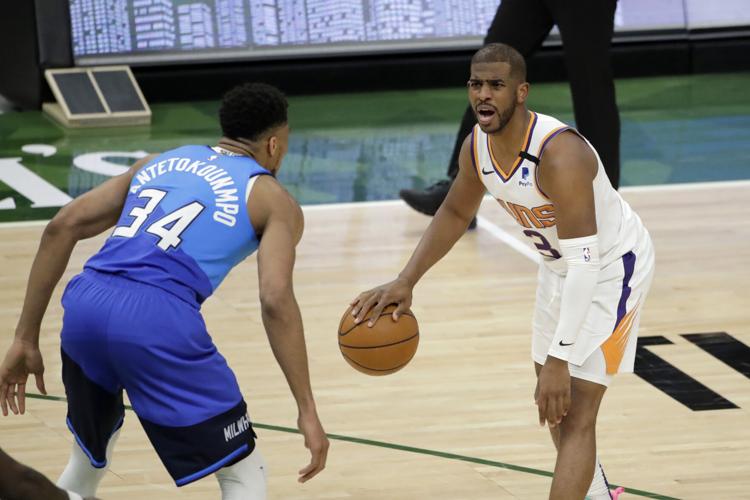 Chris Paul, right, and the Suns are 2-0 this year against Giannis Antetokounmpo and the Bucks, including a 128-127 overtime win in Milwaukee in April. 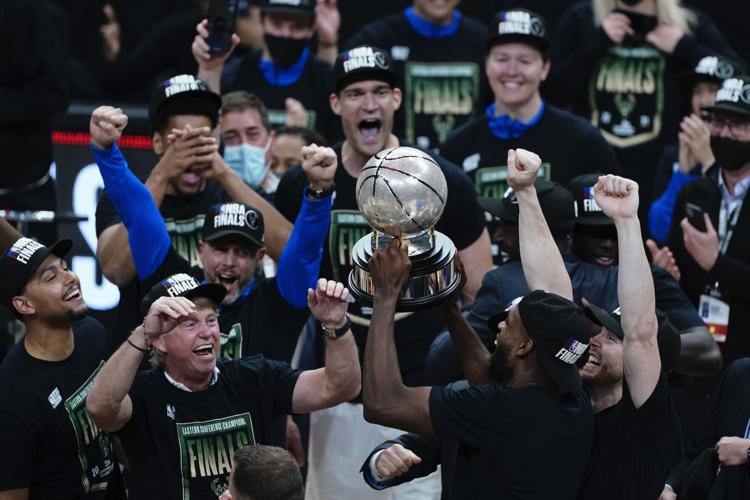 The Bucks celebrate winning the Eastern Conference Finals on Saturday night in Atlanta. Milwaukee visits Phoenix for Game of the NBA Finals on Tuesday night.