PHOENIX — The ball went from Chris Paul to Devin Booker and didn't stop moving until former Arizona Wildcat Deandre Ayton scored after every Suns player had touched it.

The 10-pass sequence was the prettiest play of the NBA Finals and the kind the one-man show Bucks couldn't dream of.

“I think that was the most pumped I’ve been after the playoffs,” Booker said.

Imagine the feeling if his team gets two more wins.

The Suns have never been closer to an NBA title. Not bad for a team whose coach told them earlier this season had the league's sorriest starting unit, forcing the players to figure things out.

“We did and we’re going to keep it going,” Paul said.

Booker made seven 3-pointers and the Suns went 20 for 40 behind the arc. Mikal Bridges scored 27 points, and Paul finished with eight assists. Ayton had 10 points and 11 rebounds for another double-double.

The Suns surged ahead late in the first half, withstood Giannis Antetokounmpo's all-around effort to bring the Bucks back, and walked off winners again as fans swung orange rally towels all around them.

Antetokounmpo had 42 points and 12 rebounds in his second game back after missing two games because of a hyperextended left knee.

The Suns never even had a lead in the NBA Finals until their 118-105 victory in Game 1. They dropped the first two games in both 1976 and 1993, their only other appearances, and didn’t win more than two games in either series.

They've already got two this time and will go after a third Sunday in Milwaukee, which will host the NBA Finals for the first time since 1974.

“We know what the deal is," Antetokounpo said. "We’ve got to go back home and protect home.”

Jrue Holiday played more aggressively but didn’t shoot a whole lot better than in Game 1, scoring 17 points but hitting only 7 for 21. Khris Middleton was 5 for 16, forcing Antetokounmpo to carry an even heavier load on his sore left leg.

It adds up to the Bucks having to overcome a 2-0 deficit for the second time this postseason. They did it against the Brooklyn Nets in the Eastern Conference semifinals, but had some help when first James Harden and then Kyrie Irving were injured.

Now they are facing a Suns team loaded with weapons all over the lineup, and showed off all of them in the prettiest play of this series.

They whipped the ball all around the perimeter for the final basket of the first half. It went from Paul to Booker to Jae Crowder to Bridges, back to Crowder to Paul, then over to Crowder and once again Bridges. He then finally fed it inside to Ayton, who scored while being fouled with 14.9 seconds left for a 56-45 lead at the break.

The Bucks could only dream of having that many guys involved. Antetokounmpo’s 15 field goals were more than twice as many as any other Milwaukee player.

Phoenix opened a 65-50 lead with a good start to the third, but Antetokounmpo — and pretty much only Antetokounmpo — kept the game from getting away from the Bucks. He scored 20 of the Bucks’ 33 points in the third, the first 20-point period in the finals since Michael Jordan against the Suns in 1993.

“Nothing Giannis does surprises me anymore. He’s got the nickname Freak for a reason," Bucks guard Pat Connaughton said. "I will say it’s incredible what he’s been able to do, and it hasn’t happened without time he’s put in to get himself ready, get his body better and continue to do the things that he does to be a two-time MVP.”

Milwaukee got it all the way down to six in the fourth, but Paul nailed a 3-pointer and Bridges had a basket to quickly push the lead back to double digits.

Milwaukee outscored Phoenix 20-0 in the paint in the first quarter, but eight of the Suns’ nine baskets were 3-pointers and they were behind just 29-26.

Only two fouls — both on the Suns — were called in a clean quarter. Antetokounmpo took the only two free throws, making one and shooting an airball on the second as fans continued counting, as they have in Bucks’ road games during the playoffs to show that he often doesn’t appear to shoot them within the allotted 10 seconds.

It was tied at 41 with just under five minutes left in the half before the Suns surged ahead with precision offense and some shutdown defense. They finished with a 15-4 run, the Bucks managing just a pair of baskets by Antetokounmpo.

He tried to fire up his teammates with some screaming on the bench during a timeout, but he couldn’t put the ball into the basket for them. The Bucks were a dismal 6 for 25 in the period, missing 10 of their 12 3-point tries.

Abdul-Jabbar had some fun with a video on social media calling to mind the important shared history between the teams who came into the NBA together in 1968. The Bucks won a coin toss in 1969 that allowed them to select the future Hall of Famer with the No. 1 pick in the draft.

In the video, Abdul-Jabbar, wearing a Milwaukee No. 33 T-shirt, flips a coin.

Crowder had 11 points and 10 rebounds, shooting 4 for 8. He missed all eight attempts in Game 1.

The Star's Greg Hansen is counting down the 100 top sports figures in Tucson history. Up next: No. 53: Ollie Mayfield

Coach previous led Tucson's American Hockey League team in the 2018-19 and 2019-20 seasons before spending a year with the Arizona Coyotes.

Summer check-in: Catching up with Fred Harvey and the UA track and field program

He has Phoenix two wins away from its first NBA championship. Game 3 is Sunday night in Milwaukee. 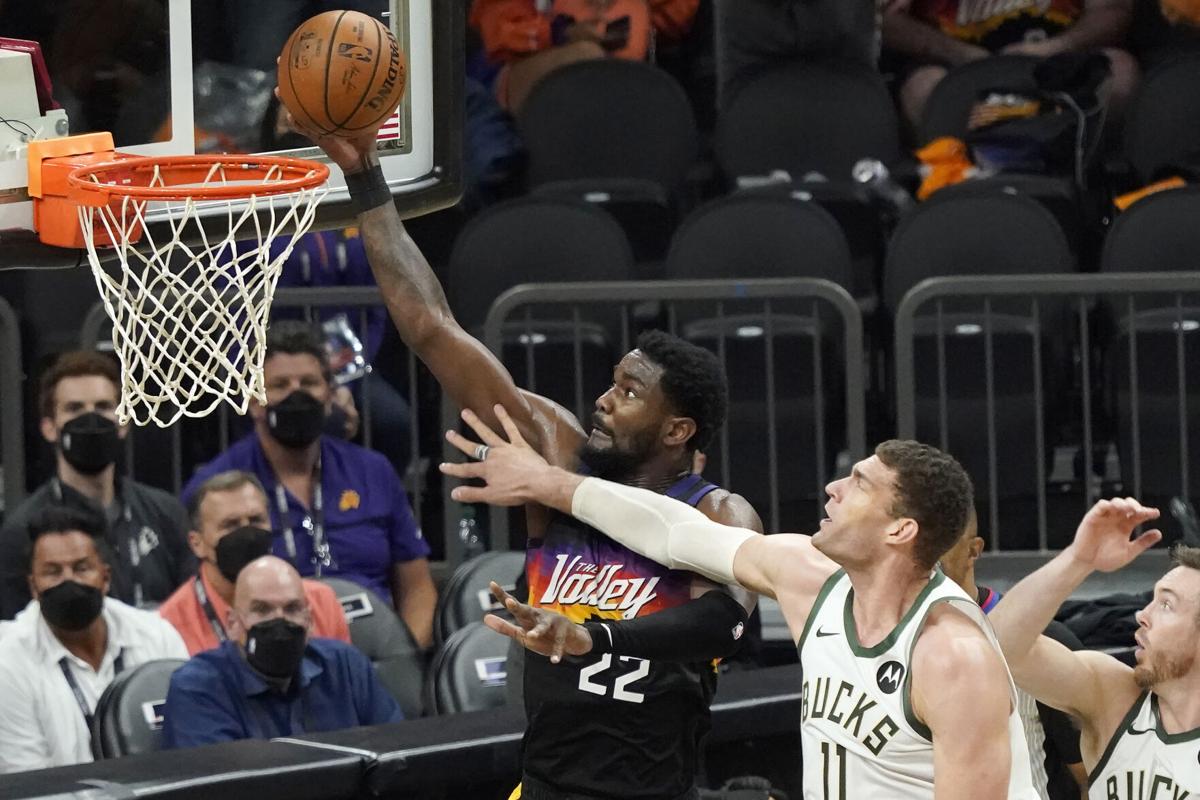 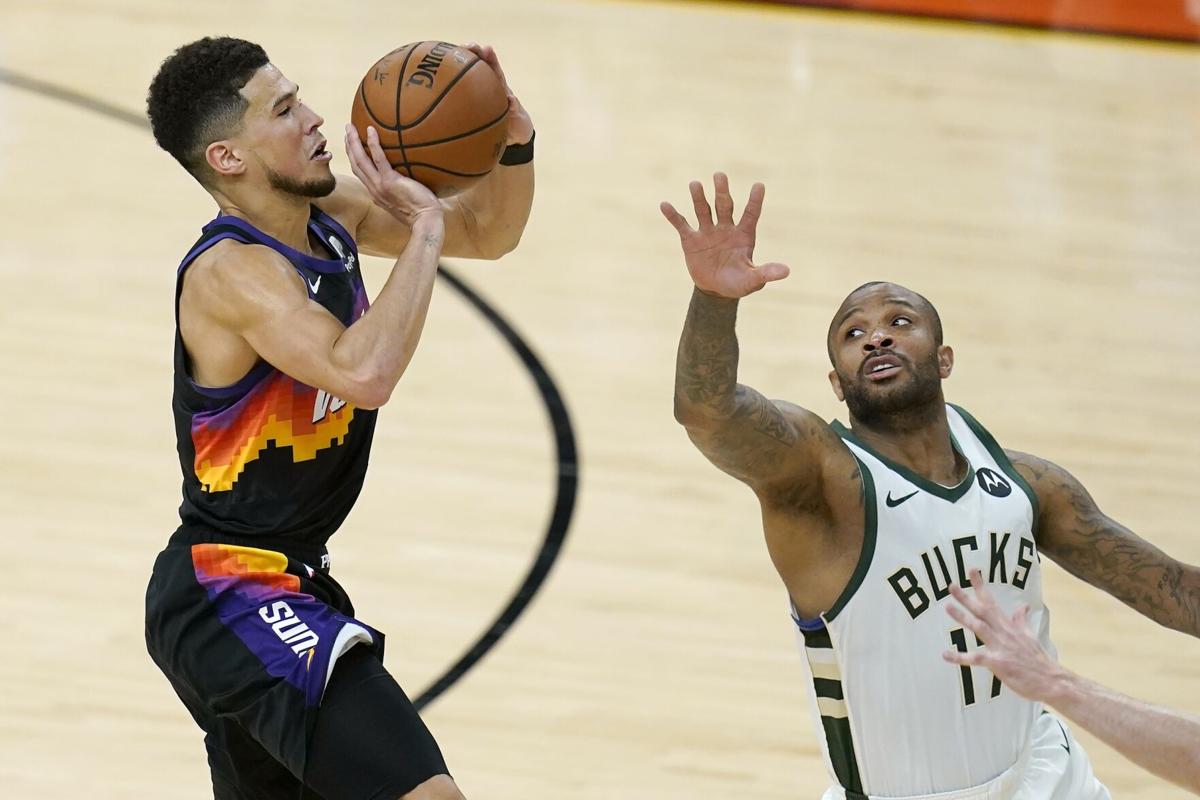 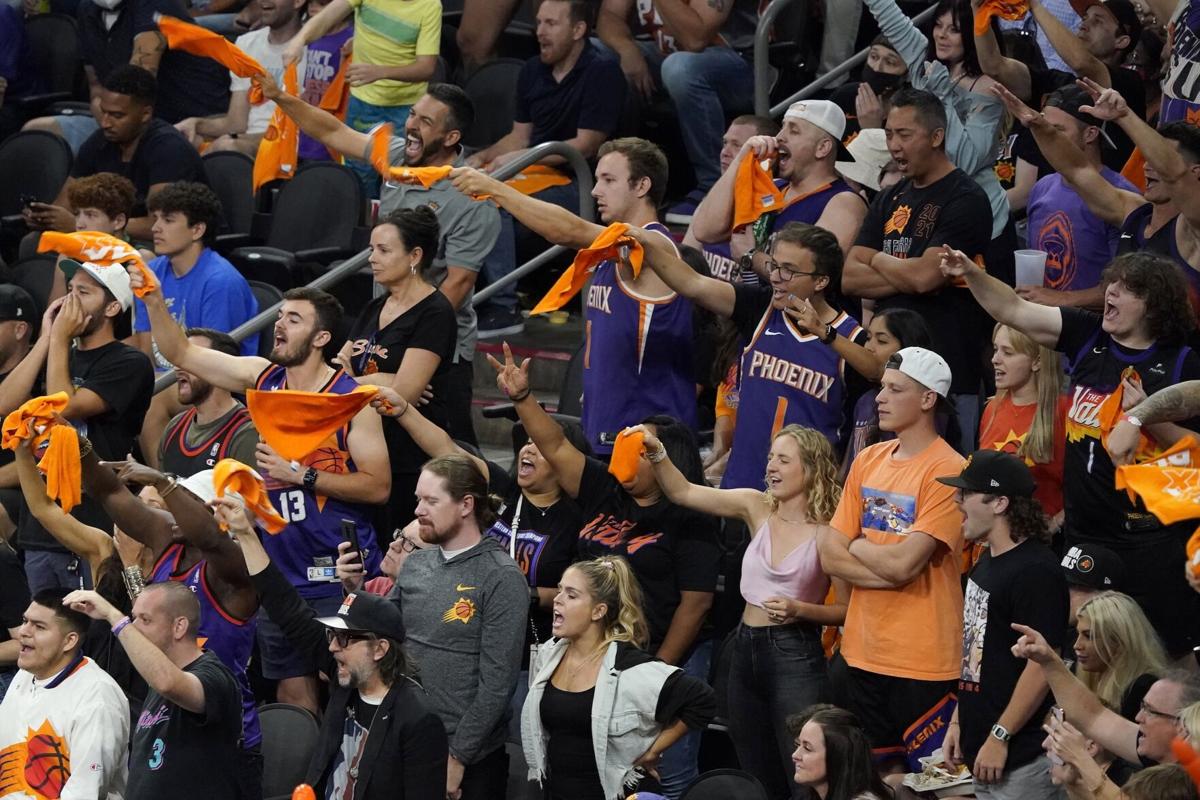 Fans cheer during the second half of Game 2 of basketball's NBA Finals between the Phoenix Suns and the Milwaukee Bucks, Thursday, July 8, 2021, in Phoenix. (AP Photo/Matt York) 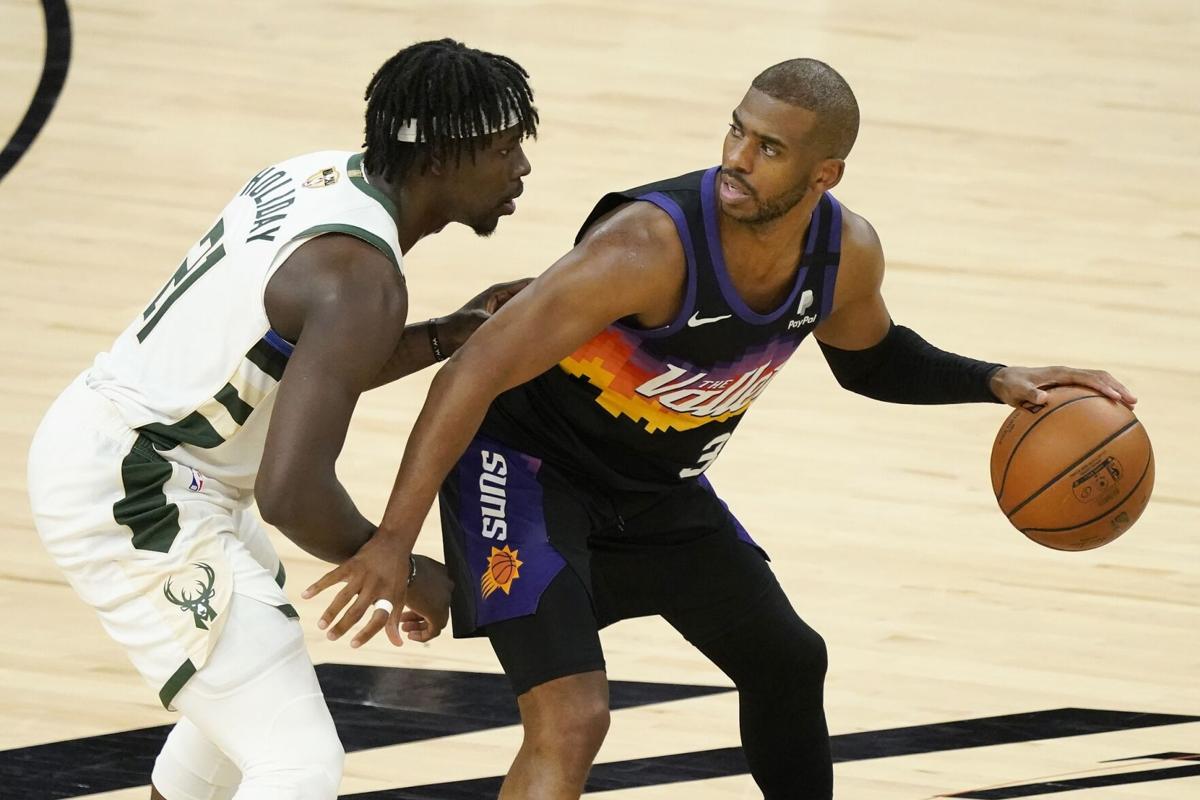