SAN ANTONIO — Devin Booker let his teammates and coaches know just how tired he was of losing to San Antonio.

When the Phoenix guard wasn’t jawing at the opposition, Booker was encouraging his teammates to fight and imploring his coaches to protest every call that went against the Suns.

Who: Suns at Grizzlies

Booker did his part, scoring 35 points before fouling out and the Suns held on to beat the Spurs 103-99 on Friday night, snapping an 11-game skid in San Antonio.

“He was wanting me to challenge every call,” Suns coach Monty Williams said while chuckling. “I’m like, ‘Dude, I only got one.’ But I thought that was what helped us, his will. He’s lost here a lot and he wanted this one bad. We wanted it bad.”

Booker has scored at least 30 points eight times in January and is averaging 31.3 points in 12 games this month. He has scored more than 35 points in six other games in January, but Friday’s output was the most satisfying.

“I said it at the end of the third to start the fourth: ‘We’re not leaving here without a victory,’” Booker said. “We wanted this one bad.”

The Spurs rallied in the fourth, cutting the Suns’ lead to 94-93 on a pair of free throws by Derrick White following Booker’s fifth foul with 3:52 remaining. Booker responded with a jumper over White on the ensuing possession before fouling out with 1:31 remaining.

Dario Saric’s follow of a missed shot put Phoenix up 100-96 with a minute remaining over a smaller lineup and snap San Antonio’s three-game winning streak.

“It wasn’t plays, it wasn’t necessarily schemes, it was just a lot of heart and competitive intensity on both ends,” Williams said.

DeMar DeRozan had 30 points and eight rebounds for San Antonio, which had won six of nine entering their second game of the season against Phoenix.

LaMarcus Aldridge (16 points) and Derrick White (13) were the only other Spurs to score in double figures.

Phoenix outscored San Antonio 23-7 to open the second quarter. San Antonio coach Gregg Popovich called two timeouts in a matter of minutes in a failed attempt to stem the momentum.

“Second quarter was a killer,” Popovich said. “I thought their physicality, they got up into us in the second quarter. We had seven turnovers and that really kicked us.”

The Spurs would score six straight points to pull within nine at 53-44, but Booker drained a 25-foot 3-pointer to put the Suns up 56-44 at the half. Booker scored 11 points on 4-for-7 shooting in the quarter.

“Every night he has that kind of game,” Saric said. “I think he’s just unbelievable how he can score and he’s still young. He’s an unbelievable scorer, and he can pass, too. I don’t know what to say, he’s amazing.”

It was the second time this season the Suns held the Spurs to 16 points in the second quarter, also doing so Dec. 14.

“In that second quarter, we tried to impose our will on the game,” Booker said.

Suns: Williams, a former Spurs player, executive and assistant, received a warm ovation when he was introduced before the game. Williams played for San Antonio from 1996-98, was a coaching staff intern in 2005 and returned to serve as the team’s vice president of basketball operations in 2017 and '18. ... Phoenix was plus-18 in the second quarter, its third highest differential in any quarter this season.

Spurs: Mills has made 100 3-pointers in a season for the sixth time with the Spurs, second only to Danny Green’s seven seasons. ... DeMarre Carroll was inactive, wearing a purple suit with white stripes as he sat behind the Spurs’ bench. Carroll has played in only 15 games this season since signing as a free agent in the offseason. … Phoenix held San Antonio to 16 points in the second quarter Dec. 14, but the Spurs won that game in overtime, 121-119.

Booker smiled when asked how it feels to quiet a raucous crowd on the road with a 3-pointer.

Suns: At Memphis on Sunday night. 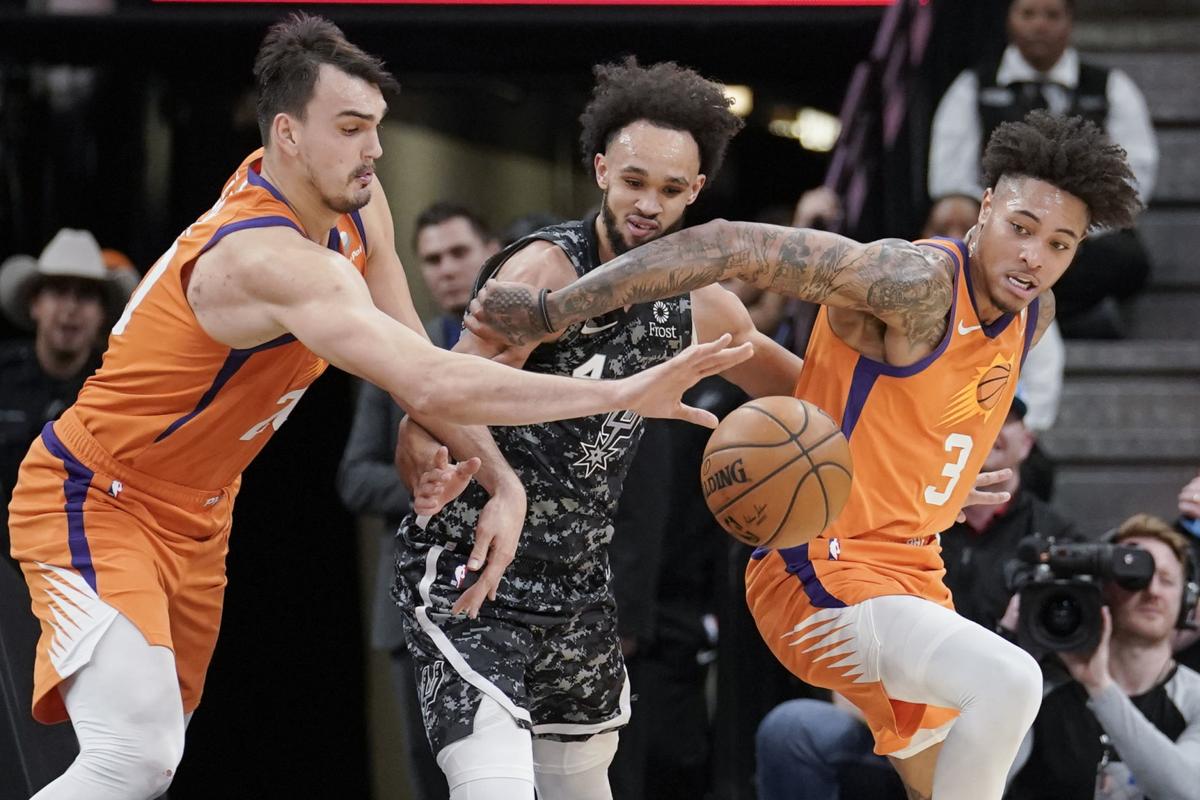 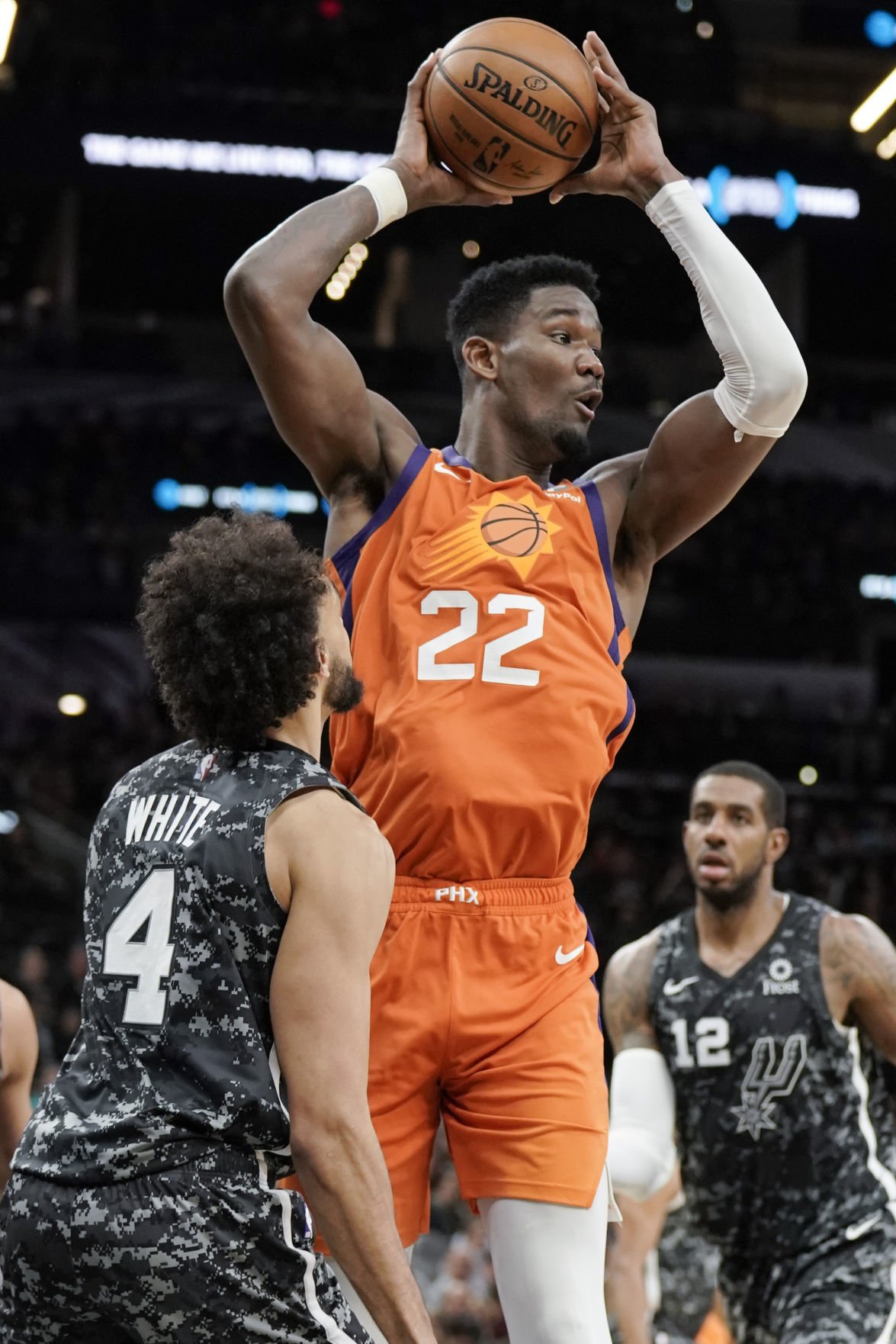 Phoenix Suns' Deandre Ayton (22) looks to pass as he is defended by San Antonio Spurs' Derrick White during the second half of an NBA basketball game, Friday, Jan. 24, 2020, in San Antonio. (AP Photo/Darren Abate) 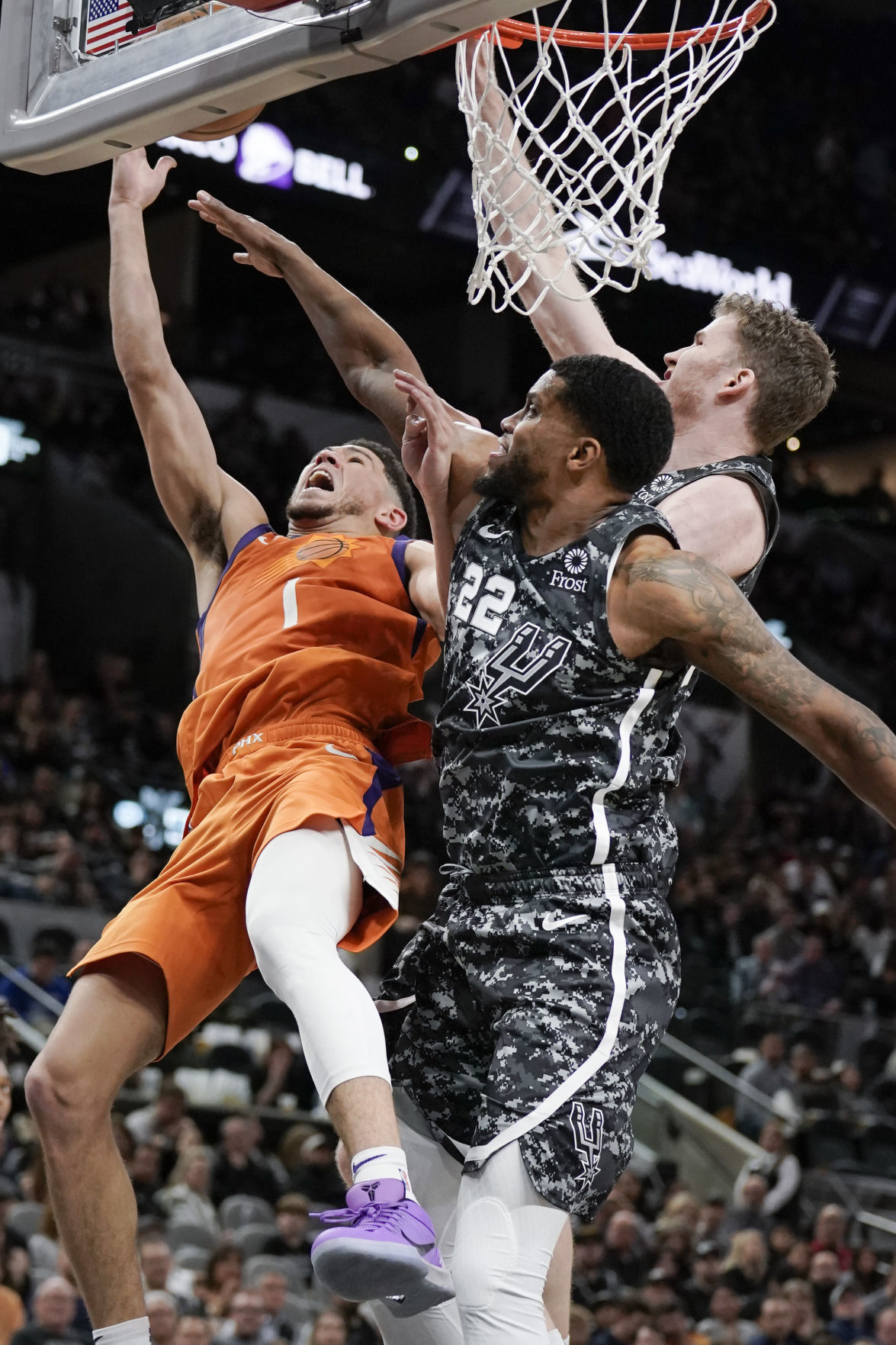