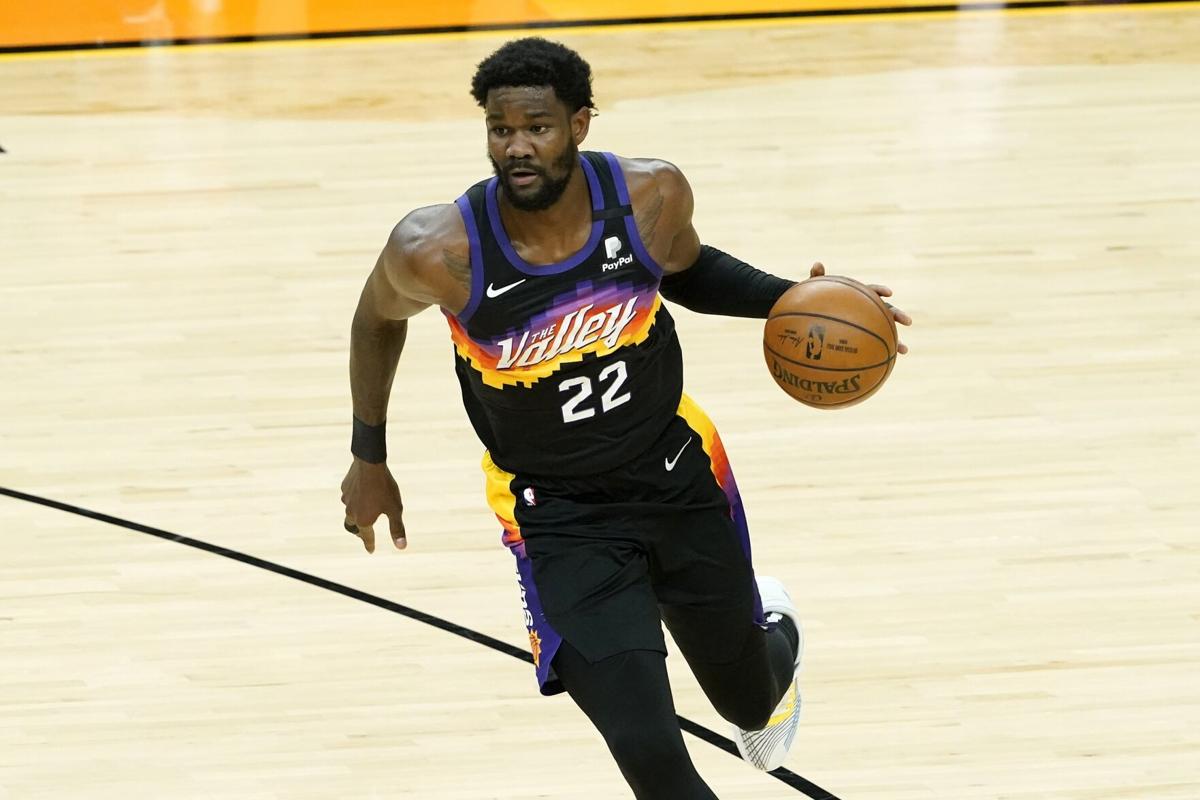 Phoenix Suns center Deandre Ayton (22) against the Denver Nuggets during the second half of Game 2 of an NBA basketball second-round playoff series, Wednesday, June 9, 2021, in Phoenix. (AP Photo/Matt York) 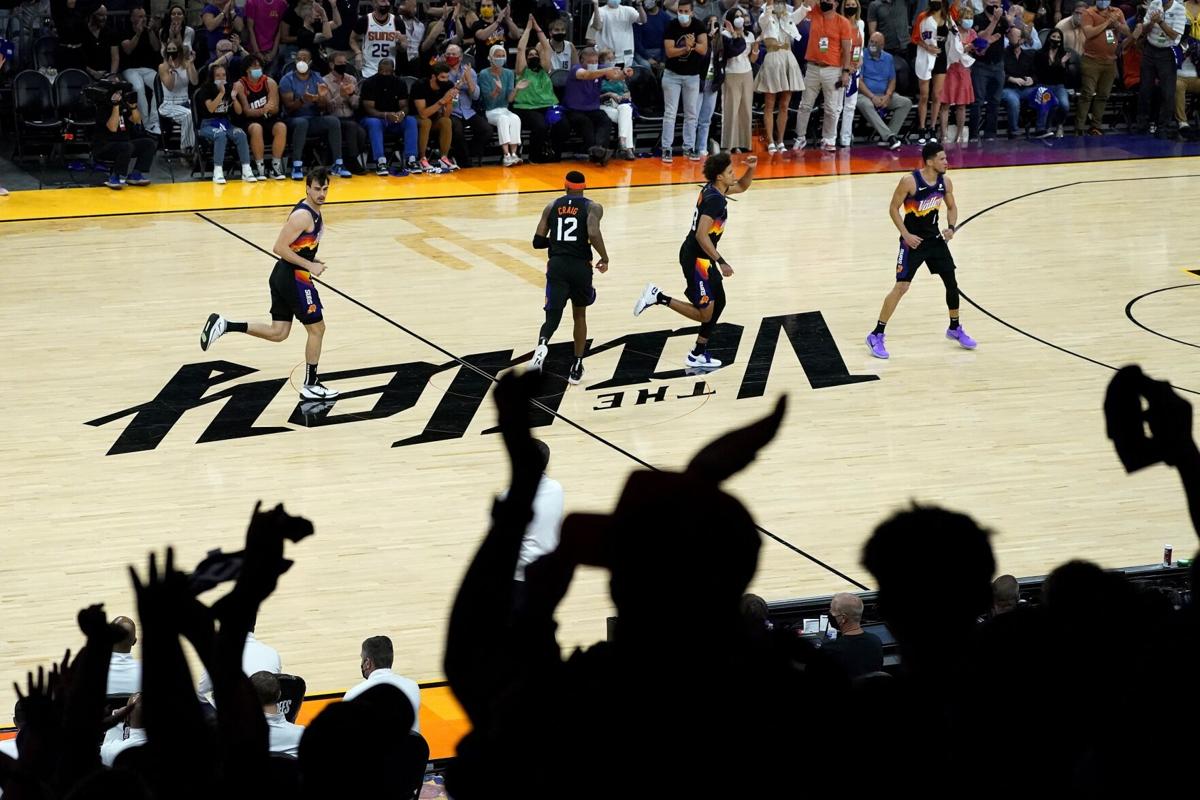 PHOENIX — Chris Paul is a 36-year-old man who can still put together an NBA point guard's version of a virtuoso performance: Fifteen assists, no turnovers and it led to another blowout playoff victory for his rolling Phoenix Suns.

The ageless Paul added 17 points, Devin Booker had 18 points and 10 rebounds and Phoenix routed the Denver Nuggets 123-98 on Wednesday night to take a 2-0 lead in the Western Conference semifinals.

Ex-Arizona Wildcat Deandre Ayton had 15 points and 10 rebounds, and Mikal Bridges added 16 points for the balanced Suns in their fifth straight victory.

Paul was particularly impressive and it appears his ailing right shoulder — which greatly limited his play against the Los Angeles Lakers in the first round — isn't much of a problem anymore. The 11-time All-Star had 21 points and 11 assists in Game 1.

Nikola Jokic had 24 points and 13 rebounds for Denver, a day after getting the NBA’s Most Valuable Player award. But the Nuggets couldn’t find anyone else to score consistently, leaving them reeling going back to Denver for Game 3 on Friday night.

“This was an embarrassing performance for myself all the way to the last player,” Denver coach Michael Malone said. “We are walking out here with our heads held down and rightfully so. There was a reason that their crowd was yelling ”Suns in four!” and they are calling for a sweep because if we play like this in Denver, this is going to be a really quick series.”

The Suns had a 10-point halftime lead Wednesday and Jae Crowder added a pair of 3-pointers early in the third to make it 60-43. Phoenix took an 86-67 advantage into the fourth. The Suns led by 31 in the final quarter as they relentlessly pushed the ball even as the lead built.

“It’s the NBA — crazy things can happen no matter how big of a lead you have,” Suns forward Torrey Craig said.

Crowder had another good night as the Suns' long-range shooter and enforcer. He and Denver's Aaron Gordon, a former Arizona Wildcat, were each called for a technical foul after they exchanged words and shoves midway through the third. On the next possession, Crowder coaxed Gordon into committing an offensive foul, much to the delight of the 16,529 at Phoenix Suns Arena.

“It was one of our better defensive halves of the year against a good offensive team,” Suns coach Monty Williams said. “We were relentless with our effort, our communication and coverages.”

Crowder said he isn't seeking to be the team's enforcer but the moments keep finding him. He joked that he's already given to much money to the NBA in the form of fines during this postseason.

“I got to be smart and protect my money a little,” he added grinning.

Paul pushed the sellout crowd into a frenzy in the fourth, throwing his 15th assist to Craig after criss-crossing around helpless Denver forward Paul Millsap. Paul then hit a pair of 3-pointers and the celebration was on in the desert with the Suns rolling in their first playoff appearance in 11 seasons.

Phoenix took a 52-42 halftime lead after a sloppy first half where both teams struggled to generate offense. Denver was shaky with its long range shooting, making just 1 of 13 3-pointers in the first quarter.

Booker had 13 points before the break. Jokic countered with 15 points.

Some of Denver's better players are dealing with injuries, including forward Michael Porter Jr. (back) and guard Will Barton (hamstring). Both were listed on the injury report.

Porter started and played 27 minutes, finishing with 11 points and six rebounds but shot just 3 of 13 from the field. Barton played for the first time in about six weeks, entering the game late in the first quarter. He played 16 minutes and had 10 points and was also called for a technical foul in the third.

'I'm ready to go': Caitlin Lowe takes over as Cats' coach, will go recruiting on Friday

Longtime associate head coach is "the right person for the job," AD Dave Heeke says. "She is going to be an outstanding coach."

Softball coaches, including Mike Candrea: NCAA can do better with gender equality

There was sharp criticism of inequalities between the men's and women's basketball tournaments earlier this year. Similar complaints were raised only a few weeks later about the women's volleyball tournament. Now, softball is having its reckoning.

The Star's Greg Hansen is counting down the 100 top sports figures in Tucson history. Up next: No. 82, Ed Updegraff.

Pac-12 Hotline: On his way out, Larry Scott blames schools, not his policies, for conference’s shortcomings

Larry Scott wouldn’t know humble if it offered him $5 million a year to wreck its reputation.

Phoenix Suns center Deandre Ayton (22) against the Denver Nuggets during the second half of Game 2 of an NBA basketball second-round playoff series, Wednesday, June 9, 2021, in Phoenix. (AP Photo/Matt York)