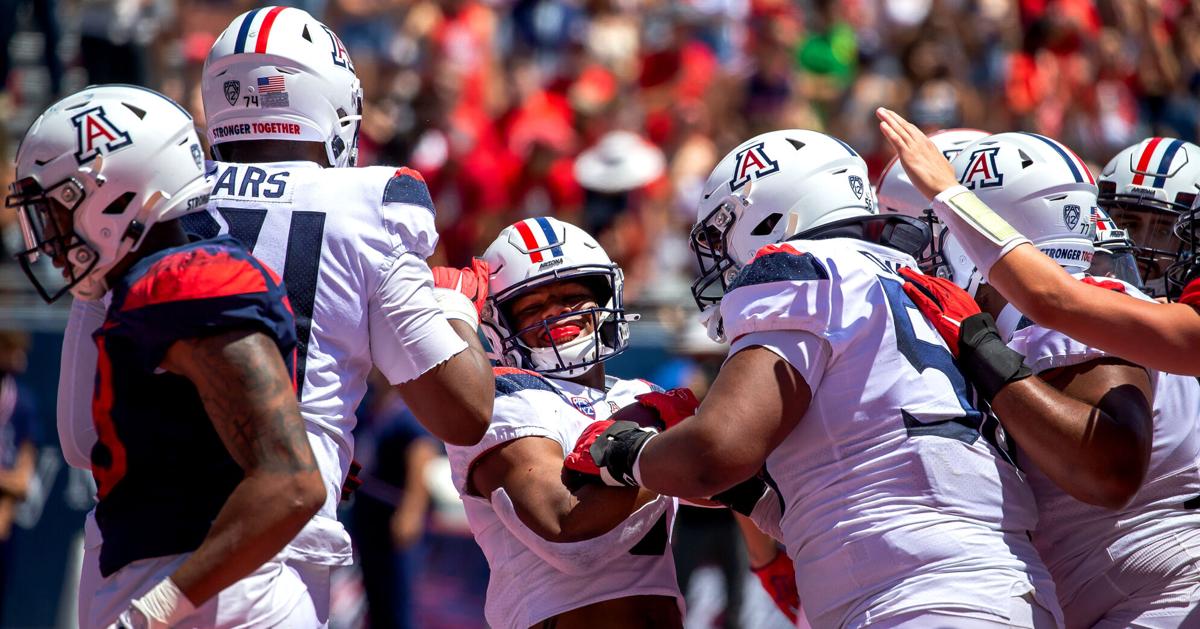 It’s still unclear how the NIL legislation will benefit a school like UA in a college town versus schools in larger cities like UCLA, USC and Washington. 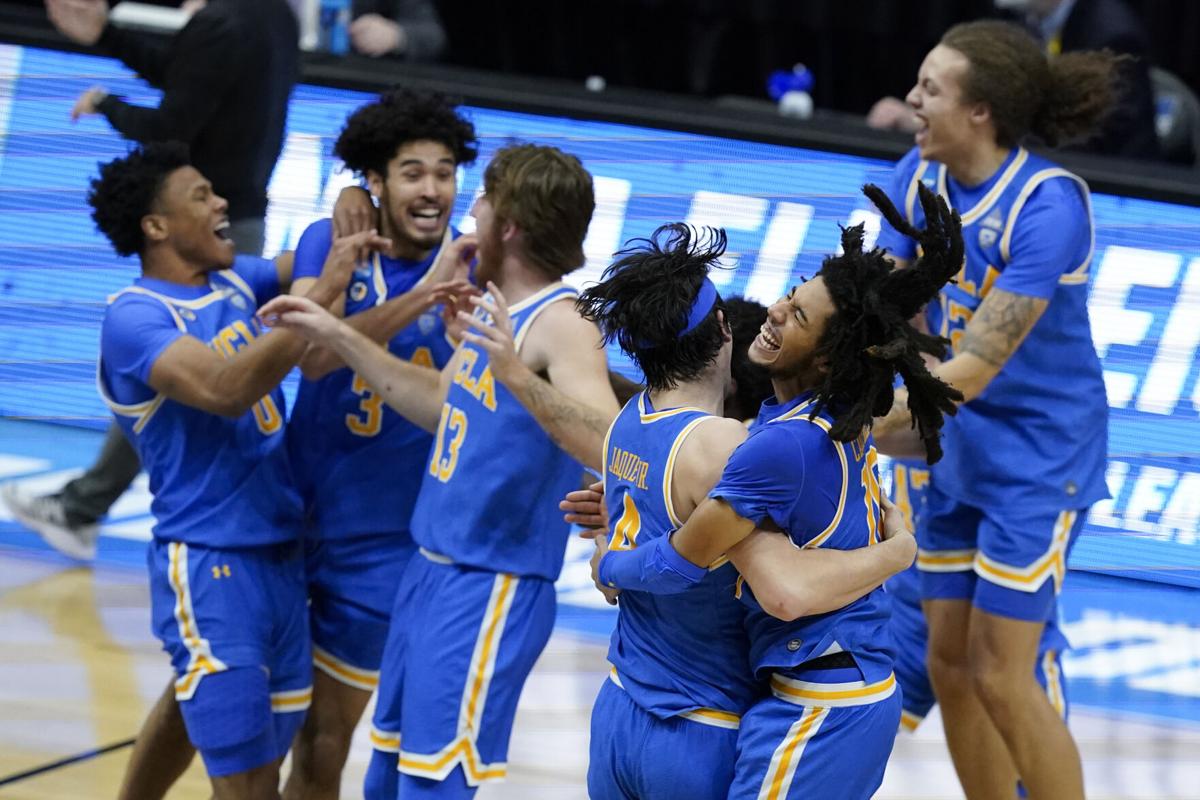 The UCLA basketball team celebrates its win over Michigan last year that sent the Bruins to the Final Four.

College sports will change forever Thursday, when the NCAA’s traditional definition of amateurism crumbles and student-athletes are permitted to earn paychecks based on their prowess on the fields and courts of play.

The NCAA Board of Directors approved one of the biggest changes in the history of college athletics Wednesday, clearing the way for nearly a half-million athletes to start earning money based on their fame and celebrity without fear of endangering their eligibility or putting their school in jeopardy of violating amateurism rules that have stood for decades.

Many are heralding the moment; some are dreading it; no one is exactly sure how it will play out over time.

But we know this much:

The implementation of Name, Image and Likeness legislation across the country is extraordinarily confusing, largely because the NCAA wasn’t prepared for a moment years in the making.

Here’s a cheat sheet for fans to better understand the rapidly changing world of college sports.

What is NIL?Name, Image and Likeness describes the process by which college athletes are allowed to receive financial compensation through marketing and promotional endeavors — from autograph signings to product endorsements to social media posts.

What’s the origin of NIL?The legislation traces its origins to a class-action lawsuit filed in the late 2000s by former UCLA basketball player Ed O’Bannon, who argued that college athletes should be compensated for the use of their name and image in video games.

The process lurched forward in the fall of 2019, when California enacted the Fair Pay to Play Act allowing athletes to be paid for promotional opportunities.

Passage of Fair Pay to Play sparked similar legislation in other states and forced the NCAA to accept a new reality.

Fearing the passage of slightly different NIL rules in each of 50 states, the NCAA asked Congress for a federal law that (shockingly) has yet to come.

When does the new NIL rule take effect?Because the legislation was scheduled to begin Thursday in six states (Florida, Mississippi, Texas, Alabama, Georgia and New Mexico), the NCAA has approved NIL for athletes at all colleges and universities on that date.

In the states without specific NIL laws on the books, an interim policy will permit athletes everywhere to pursue opportunities.

That policy is expected to be approved by the NCAA’s Board of Directors on Wednesday and includes these guidelines:

Student-athletes who attend a school in a state without a NIL law can engage in this type of activity without violating NCAA rules related to name, image and likeness.

College athletes can use a professional services provider for NIL activities.

Student-athletes should report NIL activities consistent with state law or school and conference requirements to their school.

If Congress doesn’t eventually craft a federal law, the NCAA will formalize its policy.

Who can pay the athletes?The courts have explicitly stated that payments for athletic-related performance cannot come from the universities themselves but instead from the business world.

For example, a local car dealership could pay the starting quarterback $25,000 for the right to display his image on billboards around town.

Social media companies could pay athletes $1 (or more) for every follower they have.

Technology companies could pay athletes to endorse their products and services.

What is the maximum payment allowed?There are no limits on the compensation.

A Heisman Trophy candidate could earn $10,000 for a one-hour autograph session.

A backup tailback could receive $10 or per month for promoting a local pizzeria.

How will NIL impact recruiting?For the NCAA and its universities, the most concerning aspect of NIL is the potential for exploitation of recruiting rules — for car dealerships in different cities to effectively bid for a standout prospect in order to lure him or her to the local school.

The interim policy adopted this week by the NCAA maintains the commitment “to avoid pay-for-play and improper inducements tied to choosing to attend a particular school.”

Many schools likely will create rules similar to the one announced recently by Florida, which states that boosters “may not compensate or arrange compensation to a current or prospective intercollegiate athlete for her or his name, image, likeness.”

(The NCAA broadly defines boosters as “representatives of the institution’s athletic interests.”)

Exactly how NIL compensation will be kept separate from the recruiting world is anyone’s guess.

Many within college sports view NIL as a form of legalized cheating.

Which schools will benefit?Altius Sports Partners was created last year to help athletic departments across the country navigate the world of NIL.

Does NIL benefit universities located in college towns, where there is deep fan affinity and recognition of the athletes, or in big cities, where more and wealthier businesses exist?

In other words, is Arizona basketball better positioned to take advantage of NIL than UCLA basketball? Is Washington football in better position than Oregon football? And how does NIL impact the Pac-12 generally compared to the Big Ten and SEC?

“The football programs that invest in NIL in a long-term manner and don’t make quick promises they can’t keep are the ones that will be successful,” Schwab said.

“It won’t be long before these deals are made public — it’s advertising, and we’ll see it. So if schools overpromise and underdeliver, the kids will see it and leave (through the transfer portal).

“Really, it depends on how the schools tap into their local resources and culture. In L.A., it might be the music scene. In Alabama, it might be hosting a golf tournament.

“The key is making sure the athletes understand the scope of the opportunities available in person and through social media and how well the schools tap into the local approach.

“It’s not a one-size-fits-all situation.”

Trojans AD Mike Bohn still believes “in the promise” of the conference.

Despite the low-profile nature of the gathering, make no mistake: There was plenty on the line.

The university presidents who oversee the College Football Playoff have approved the next step in the expansion process: a feasibility study to determine the details for the proposed 12-team, four-round event that would transform college football.

Potential changes are months if not years away, but they include the elimination of divisions and the reduction in conference games from nine to eight.

Pac-12 Hotline: Alleged recruiting violations by ASU during COVID are both deplorable and unsurprising

If the allegations are true, the Sun Devils were flouting the COVID protocols adopted by the NCAA and the Pac-12. If true, it’s not just run-of-the-mill cheating.

The proposed format for an expanded College Football Playoff doesn’t guarantee a berth for the Pac-12 champion, but it would secure a massive cash infusion for the entire conference.

D-backs swept for 13th time this season with another loss in St. Louis

Bulldogs roll 9-0 in Game 3 of CWS Finals in Omaha, allowing only one hit on the night.

Montreal outshot Tampa Bay 43-23 and dominated long stretches of play, but heads home for Games 3 and 4 needing to win at least one to avoid being swept.

Led by Chris Paul, Devin Booker and former Arizona Wildcat Deandre Ayton, the Suns are in the NBA Finals for the first time in 28 years.

A look at recent conference developments, on and off the field.

Pac-12 Hotline: Winners and losers from the NBA Draft and transfer market

UCLA should be even better than last year's Final Four team, while Arizona will enter the season with low expecations.

The Big 12 has 10 teams but only two viable expansion options for the Pac-12 to consider.

The Hotline thinks Tommy Lloyd's first season in Tucson will be a rebuilding one.

"I love the schools and the teams we have today. We are not actively seeking to poach any teams from any conferences. But we’d be foolish not to listen if schools call us."

It’s still unclear how the NIL legislation will benefit a school like UA in a college town versus schools in larger cities like UCLA, USC and Washington.

The UCLA basketball team celebrates its win over Michigan last year that sent the Bruins to the Final Four.