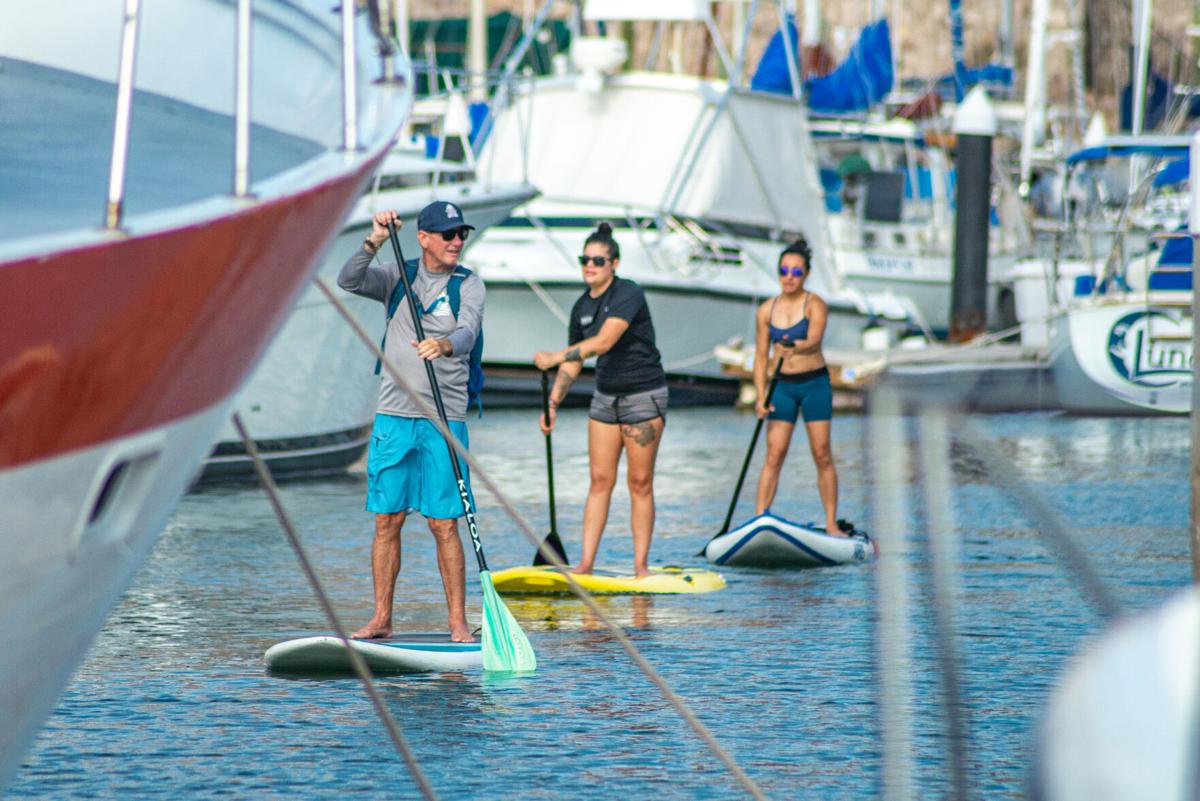 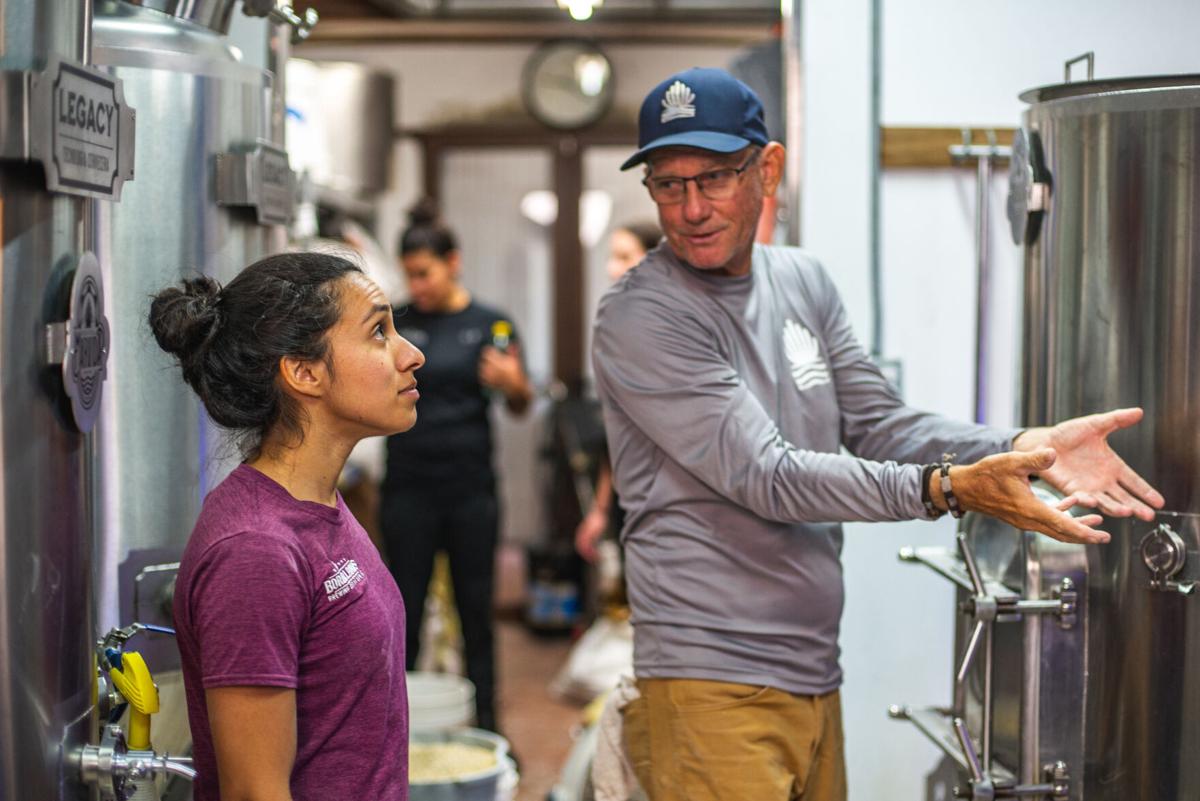 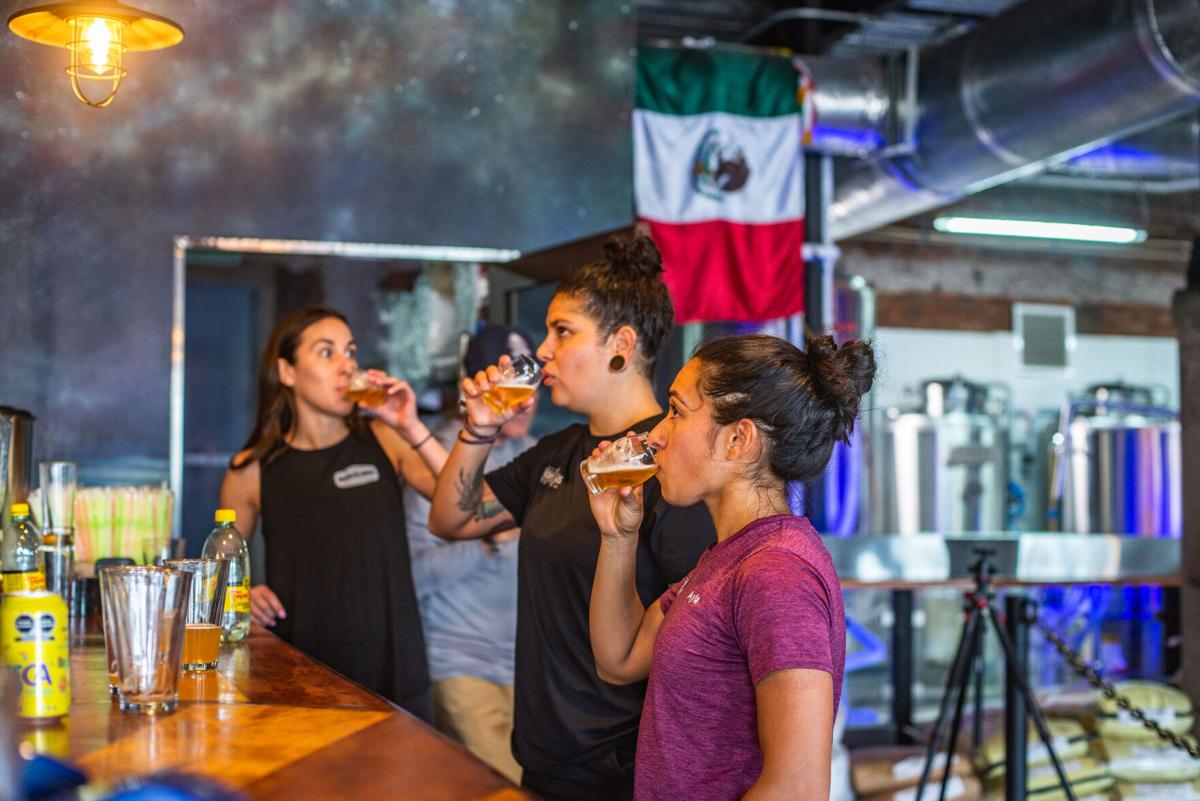 During a pre-brew beer tasting on Friday, Borderlands Brewing Co. staffers Dominique Jablonski, Savanna Saldate and Ayla Kapahi try out Marvida’s Orange Dream wheat beer, which has a similar recipe to the mango-wheat brew planned for their collaborative brewing session. 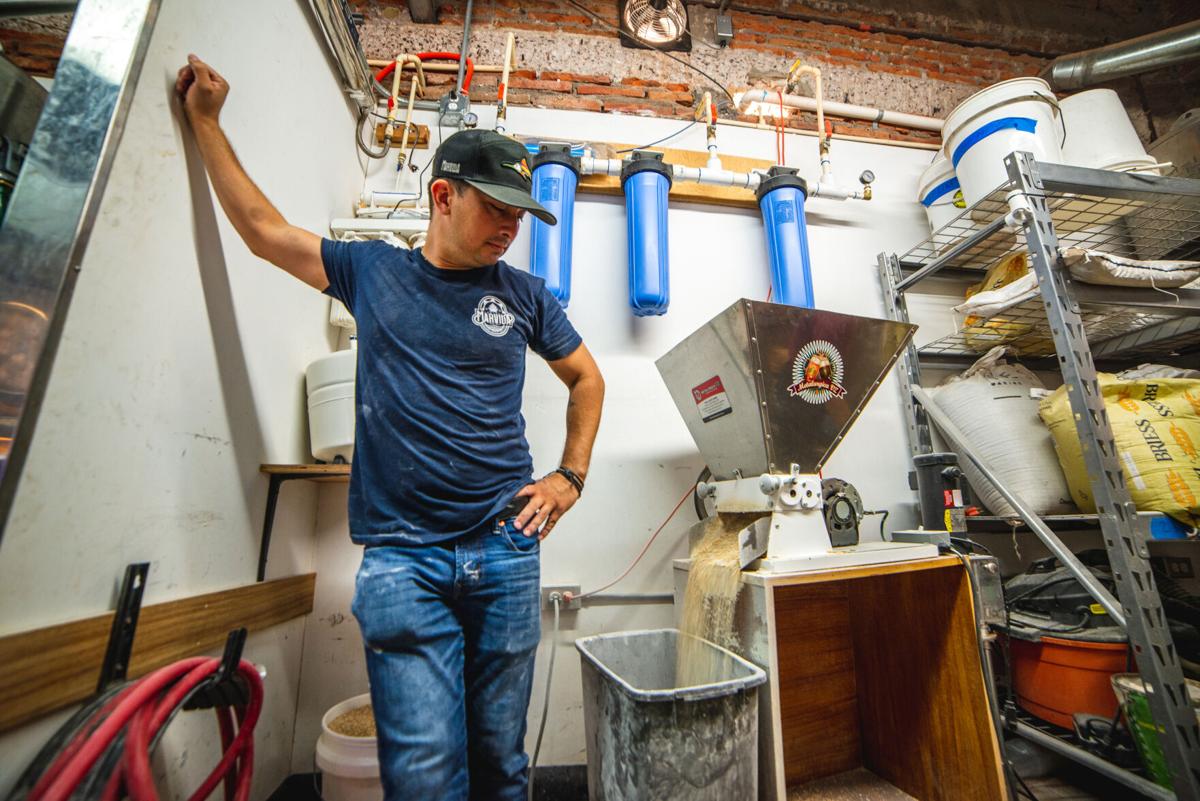 Tomás Thomas, co-owner of Marvida in San Carlos, watches as white Sonora wheat is milled during a collaborative brewing session with guests from Borderlands Brewing Co. on Friday morning. 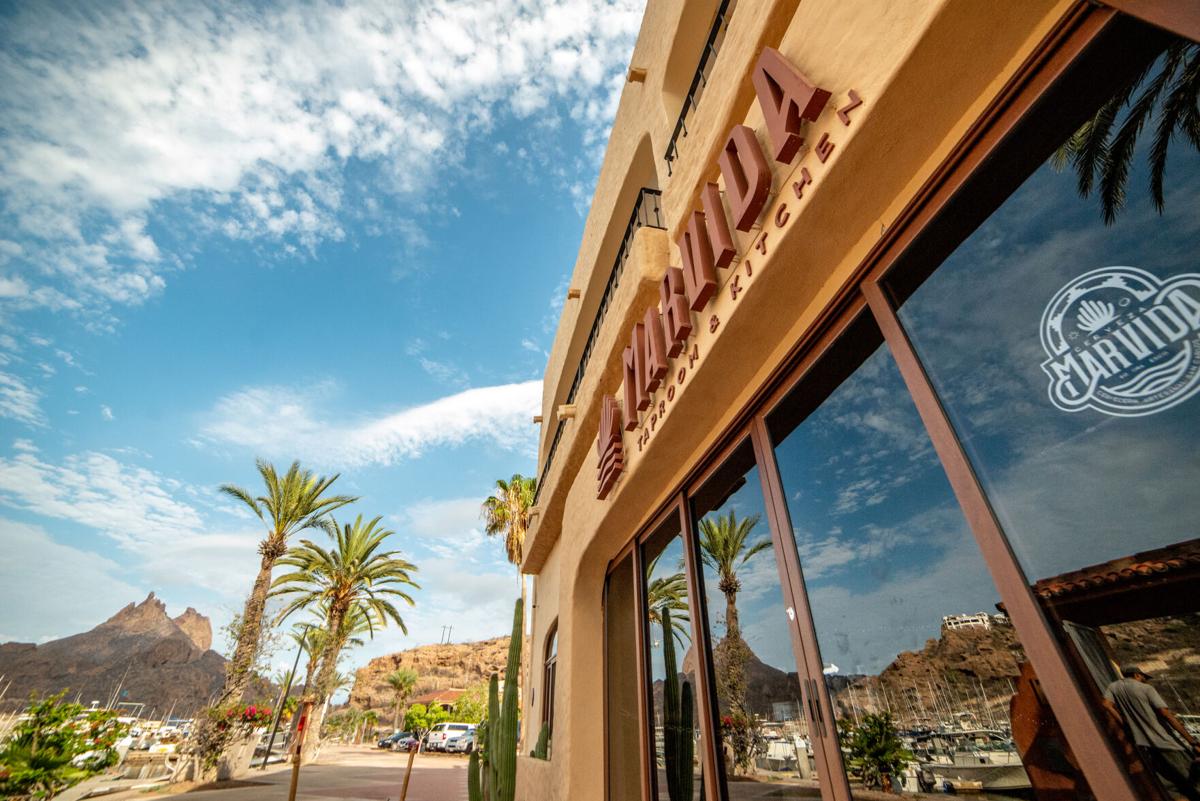 Ayla Kapahi and her Borderlands colleagues had road-tripped from Tucson to San Carlos, Sonora, for a collaborative brewing experiment, in partnership with Marvida, San Carlos’ first — and so far, only — brewery.

The goal: To create a crisp, sweet wheat beer, made from ingredients drawn from both sides of the border, and to celebrate the flourishing Mexican craft-beer scene.

“We have these collaborations to learn from each other, to share our different skill sets and hopefully, at the end of the day, we want the consumer to be able to taste the different profiles from two different breweries,” Kapahi said.

Marvida opened in January 2020, soon before the pandemic forced a temporary closure. For Marvida co-founder Eric Fairfield, who grew up in Tucson, Kapahi has been a mentor and inspiration.

“I’ve watched her career in amazement,” he said.

About six years ago, Fairfield was working at Tucson’s Catalina Brewing Company and giving a group tour that included Kapahi, who had recently started brewing professionally.

Pretty quickly, he said, “I realized she knew quite a bit more than I did.”

Fairfield, an entrepreneur, was a regular tourist in San Carlos for 26 years before moving here full-time in 2019. During a recent Tucson visit, he met up with Kapahi, 30, and they planned a collaborative brew, south of the border.

Kapahi’s crew brought unmalted, Tucson-grown white Sonora wheat to the collaboration. The drought-tolerant heritage grain was adopted by the Tohono O’odham Nation and the Salt River tribe in the mid-1600s, after Father Eusebio Kino and his missionaries introduced it to the region, said Andrea Carter of Native Seeds/Search, a conservation nonprofit in Tucson.

Kapahi said BKW Farms in Marana provided the wheat, which was reintroduced to commercial production in Tucson in 2013, thanks to an initiative of Native Seeds.

The Marvida team harvested 5 pounds of mangoes from San Carlos trees to add a tangy sweetness to the American wheat brew.

Later this year, the Marvida crew plans to head north to Borderlands Brewing Co. for another collaborative session, so Tucsonans will soon get to sample their work, Fairfield said.

After an early morning paddleboard ride into the San Carlos Bay, Kapahi, her brewing partner Savanna Saldate and Fairfield disembarked at the docks outside Marvida’s sliding glass doors.

It was about 8:45 a.m. when Fairfield served up a few 5 oz. pours of Marvida’s Orange Dream wheat beer, as a point of reference for the brewers. Orange Dream’s recipe would be the basis for the mango wheat the team had planned for the day’s eight-hour brewing session.

After tasting, Kapahi recommended reducing the amount of hops in their own recipe, so the bitterness wouldn’t compete with the sweetness of the mango.

“This beer is not going to be very hoppy or bitter,” she said. “It should have a nice crisp, almost biscuity grain flavor, in combination with the sweet fruit that's in there. It's going to be a very light, easy-drinking style.”

After a couple weeks of fermentation, the results will be in.

The craft beer scene in Sonora was basically nonexistent five years ago, said Tomás Thomas, co-owner and operations manager of Marvida. But today in Sonora, there are 15 established craft breweries with permits, plus dozens more small-scale home breweries.

Most Mexican commercial beers, such as Dos Equis, Tecate and Corona, are lagers or pilsners rooted firmly in the central European brewing style, said Thomas, who grew up in Guaymas, about 330 miles south of Tucson.

But a lot of independent brewers in Baja California and Sonora have gravitated toward IPAs, blonde ales, porters and stouts — styles popular a few hours north, in the Western part of the U.S., Thomas said.

“There are amazing commercial lagers already,” he said. “Dos Equis did an amazing beer. Indio, amazing. So instead of brewing a craft lager that you can get in Oxxo (a Mexican convenience store), why not brew an IPA that you can’t get in Oxxo?”

“We’re mostly brewing what we want to drink that we can't find anywhere else here,” he said.

Guaymas Brewing Company is working with Marvida to organize a beer festival in San Carlos, slated for early 2022. Fernandez said they’re hoping for 20 to 30 out-of-town brewers to join them.

Fernandez, 32, grew up in Guaymas — the seaside municipality that includes San Carlos — and moved to Ensenada, Baja California in 2013.

There, the craft brewing scene was booming. He attended training sessions with visiting brewers from San Diego, Calif. who influenced him “tremendously.” Four years ago, he returned to Guaymas and partnered with a friend to launch Guaymas Brewing Company.

When friends started showing up at his small brewery, wanting to hang out and pay by the pint, Fernandez secured a permit to operate a taproom out of his dad’s garage, he said.

Now, even ex-pats living in San Carlos are visiting, Fernandez said. He recently served a group of three San Carlos customers, the youngest in his 80s.

“I’m really flattered they’re driving all the way from San Carlos to my small garage to have a few beers,” he said. “More and more people are showing up. We couldn’t be happier.”

The Ostionera brew is named for Guaymas’ beloved former baseball team, the Ostioneros, their team name a tribute to the port city’s oyster farmers. It’s infused with mesquite-smoked oysters, fresh from the Sea of Cortez. The first batch, which was fermented for two months, rather than the typical two weeks, ended up being 8 percent alcohol-by-volume, Fernandez said. It won a silver award in Mexico’s Copa Cerveza competition in 2019.

“It’s Guaymas beer,” he said. “Our beer styles and concepts are trying to reflect something local that we hope touches people in a way that commercial beers don't.”

Borderlands Brewing Co. is making a habit of cross-border collaboration. Last year, Borderlands partnered with a binational team of all-female brewers from Arizona and Mexico to create Las Hermanas, or The Sisters, an IPA with citrus and tropical flair.

Promoting the work of female brewers might seem unnecessary to some beer lovers.

While that’s true, that attitude ignores the reality women face in the male-dominated industry, she said.

When Kapahi was first breaking into the field, discouraging comments almost derailed her. She was told her small stature would be a barrier to brewing, which can require working with heavy bags of materials.

She recalled a coworker telling her, “It’s not your fault, but you might not be physically able to do this. This is probably not a career path for you.”

“I was kind of rattled,” she said. But her mentors at Public Brewhouse in Tucson — which closed last year, due to the pandemic — reassured her that heavy lifting is a fraction of brewing. Attention to detail, palate, creativity and instinct were far more important.

And Kapahi said it wasn’t hard to build up the strength required to meet the physical demands of the job.

To this day, customers sometimes assume she and lead brewer Saldate are sales reps.

“They say, ‘Where’s your brewer? Is he here?’” she said. “Until the surprised looks stop, there’s still always work to be done.”

Fairfield is eager to help level the playing field; he’s searching for a female brewer to bring on as an apprentice at Marvida.

About 9 a.m. on Friday, the Borderlands team started milling the Tucson wheat, as Fairfield heated up a huge vat of water (called a “mash tun” in brewing circles) to the precise temperature required for the perfect mash.

That first 60 minutes of cooking the grain into mash — extracting starch, sugars and proteins — is the most critical part of the brewing process, Kapahi said.

“Flavor, ABV (alcohol by volume), body, astringency — so many characteristics of the beer are going to be determined here,” Kapahi said.

Those factors are influenced by the mash temperature and brew salts added to the water, which determines the mash pH and ultimately how the yeast will perform during fermentation, she said. The temperature of the water determines what type of sugar and flavor is released from the grains as they cook.

“It’s kind of crazy that the first hour of the brew day sets the tone for the beer’s lifespan,” she said.

Later in the day, the team filtered out the grains from the oatmeal-like mash to get the liquid base for beer. They boiled it, pasteurized it and added the mango and brewer’s yeast to the mix.

In the days to come, the beer will ferment for seven to 10 days and Marvida’s team will add more mango. Then the beer will be cooled so any solid remains of hops and grains can be filtered out of the liquid. Next, they’ll infuse the liquid with CO2 to carbonate it, Kapahi said.

After a long day of brewing, the teams regrouped at Marvida’s dock-side patio on Friday night for drinks and live music.

In between Latin songs, Fairfield said he’s always searching for people like Kapahi to learn from, and he’s eager to share the brewing techniques he acquired in the States with his Mexican partners.

“I’m all about the rising tide for everybody,” he said.

For Kapahi, too, the collaborative aspect of craft brewing is paramount.

“We don’t see it as, ‘This is my competition,’” she said. “For the most part, people are really transparent about, ‘Here’s my recipe. Can we work on it together?’ I’m very grateful for that sense of camaraderie.”

Otherwise, she said, “It wouldn’t be as fun at all.”

The beer will be released Friday during a party celebrating the project at Borderlands Brewing Company.

Boozy slushies are as fun as they are dangerous. The sugar cloaks the alcohol. Drink it before it melts. Don’t think about tomorrow. Here’s a roundup of Tucson spots to try the summer’s hottest (and coldest) drink.

Tucson, Arizona, has waited long enough for our favorite time of year. Monsoon season 2021 is upon us! This Is Tucson's new food writer, Ellice Lueders, has rounded up a list of restaurants with great views, under covered patios or behind floor-to-ceiling windows.

While the U.S.-Mexico border is technically closed to non-essential travel due to the pandemic, those restrictions have not been enforced equally. U.S. citizens have been permitted to pass freely in both directions throughout the pandemic, while Mexicans are still largely locked out of the U.S. That’s taken a toll on cross-border trade and business, as well as Mexicans with family in the States. As COVID-19 vaccination rates rise, Mexico’s leaders have been petitioning the U.S. government to relax border restrictions.