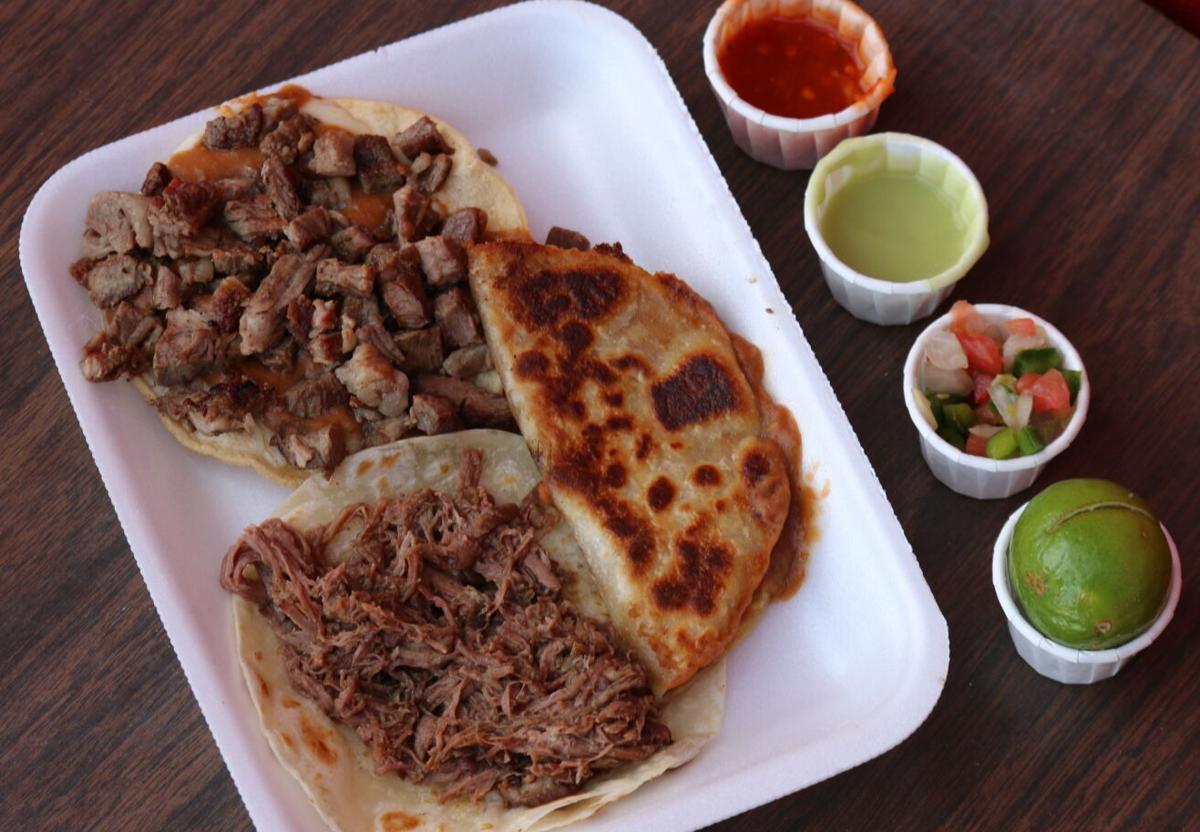 Counterclockwise from the top: a taco Lorenza, a barbacoa taco, and the taco chino with an assortment of condiments from the salsa bar. 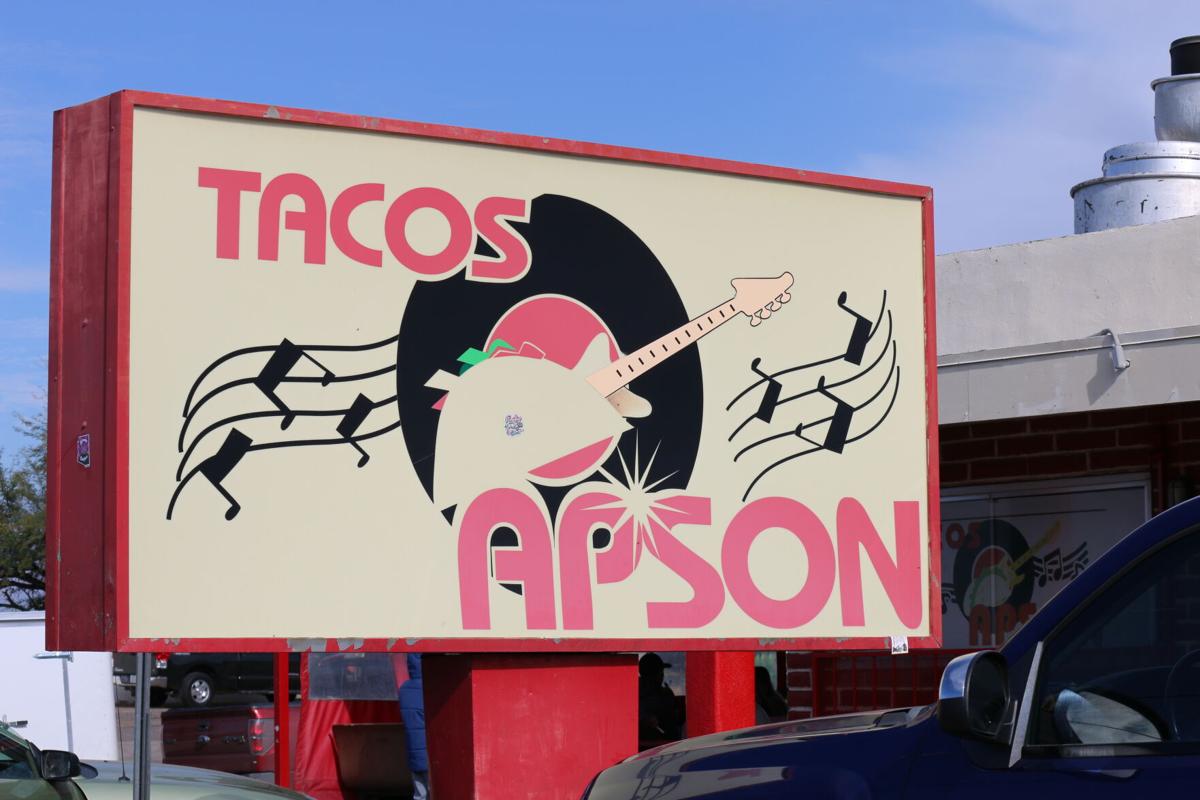 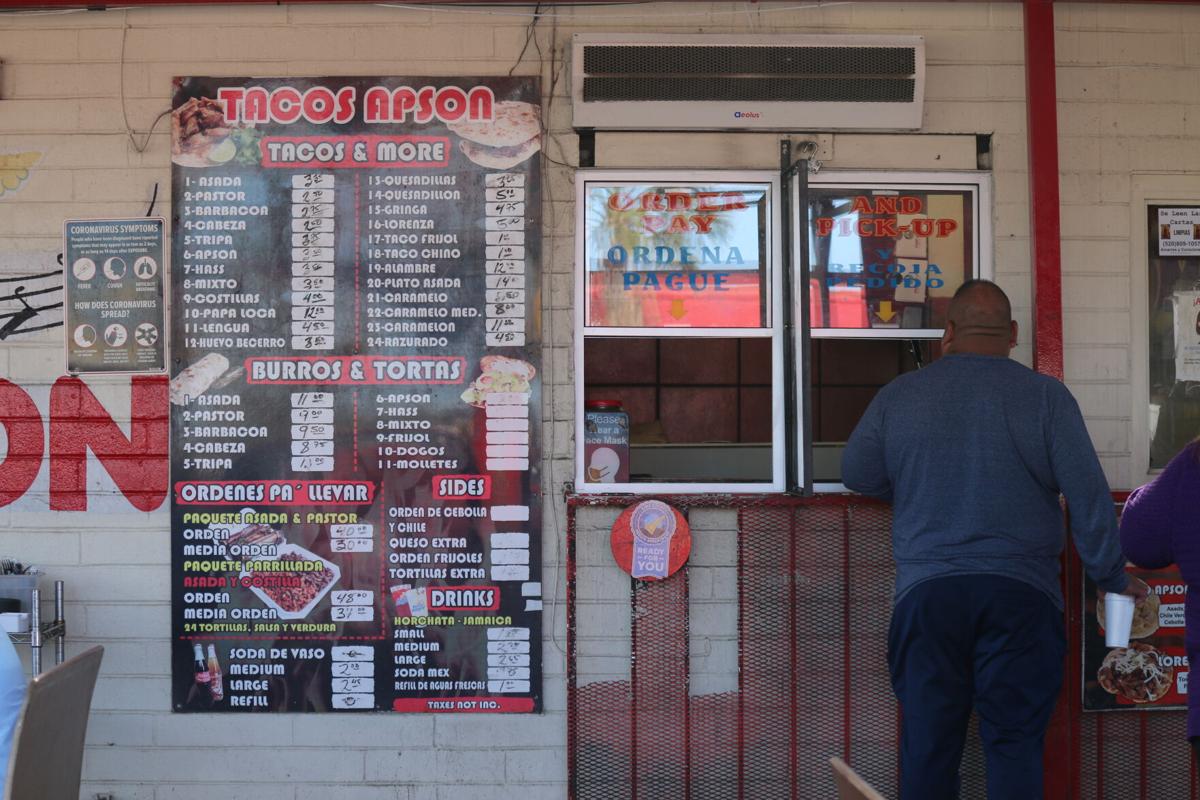 The counter-side menu at Tacos Apson features a bonanza of beef specialties.

To celebrate Tucson this holiday season, our food writer is putting the spotlight on La Doce. Follow along as we eat tacos and soak up the atmosphere at 12 different joints along iconic South 12th Avenue. Share your favorite taco memories with us on Facebook, Instagram or elueders@tucson.com.

Tacos Apson is located across the street from Pueblo High School, and the traffic on 12th Avenue has been completely backed up as the river of students floods the pedestrian crosswalk. A few of those students have made their way to the taco stand, claiming a table with their backpacks.

The girls are dressed for air-conditioned classrooms and fashion: sweats with two different prints split down the middle (a la green-hair Billie Eilish), an emo band crewneck sweater. They order a caramelo to split. They command this space.

Two moms en route to picking up their kids have stopped by to pick up horchata and a snack. I would, too, if I were them.

We gather under the benevolent eye of the cashier, who laughs when I give her my name “L,” making the loser sign on my forehead.

The older man at the grill is chiseled; handsome, but short, with a mustache bravely traversing between two sharp slabs of cheekbone. A teenager asks if they’re still selling hot dogs. No — the item is covered with blue painter’s tape in an X.

The mom picks up two burritos for herself and her child, Arizona Cardinals keychain sticking out of her pocket.

You can’t go wrong here but today I’m in the mood for a classic: I get the Lorenza, which glues crumbles of marinated carne asada together with a delightful sludge of beans and melted cheese. The tortilla is crunchy from the melting process, coming apart into the soupy mixture. As I chew, the asada flavor emerges at the forefront of my tongue. I douse it in all the condiments. I haven’t tried all the taqueria salsas in Tucson, but this one is my favorite so far: sweet and bright and hot enough that I’m missing the bottle of water I left in the car.

Regardless of the meat you choose, from briny barbacoa to carne asada, the wood-fired grill and its smoke imbue every bite with at least a hint of mesquite aroma. Add lime to amplify the concert of salt and spice that makes barbacoa’s signature tang.

The simplicity of their taco chino belies its deliciousness: it’s no more than refried beans in a grill-fried tortilla. The delicate tortilla de harina creates the thinnest crisp shell that is still just a little chewy. The taco commands three distinct textures when you include the mouthwatering gush of refried beans.

Across the street, a woman in a blouse and a messy bun waters a bougainvillea plant. The neon OPEN sign in the window is barely visible through the glare of the sun against tinted glass. Safety bars further conceal the scene.

It’s hot and you can barely hear anything over the fans and the muscular cooling system. The polka line of mariachi pushes through, cut intermittently with the loud, nervous, joyful laughter of high school students.

A pair of boys rolls up, pulling their masks on as they approach the window out of habit. One is wearing a blue “Y’all crazy” T-shirt. They’re the age to be flexing their buying power for the first time and smile at their initiation into the real world. When the boys’ order is up, a raspy announcement is made over Taco Apson’s PA system. I couldn’t understand a word, but then again, it’s been a while since I’ve heard the morning announcements at a high school. They are beckoned.

The back of Sentinel Peak is visible from across Pueblo's field, but I don’t need the “A” to tell me I’m in Tucson.

For more information, check out their website. A second Tacos Apson location can be found at 6741 N. Thornydale Road.

Flour tortillas are synonymous with Tucson. Here are 17 local places to find them made fresh daily with hours and specialties.

Known for its breakfast burritos and flour tortillas, Anita Street Market in Tucson's Barrio Anita may be ending its 40-year-run due to financial issues.

To celebrate Tucson this holiday season, our food writer is putting the spotlight on La Doce. Follow along as we eat tacos and soak up the atmosphere at 12 different joints along iconic South 12th Avenue. Today, we're checking out Tacos de Cabeza.

Read about Taqueria Lingo Lingo during today's edition of 12 Days of Tacos on South 12th Ave. To celebrate Tucson this holiday season, our food writer is putting the spotlight on La Doce.

Read about Tacos El Cuate de Obregon during today's edition of 12 Days of Tacos on South 12th Ave. To celebrate Tucson this holiday season, our food writer is putting the spotlight on La Doce.

Read about Tacos Mexicali during today's edition of 12 Days of Tacos on South 12th Ave. To celebrate Tucson this holiday season, our food writer is putting the spotlight on La Doce.

Read about Rollies Mexican Patio during today's edition of 12 Days of Tacos on South 12th Ave. To celebrate Tucson this holiday season, our food writer is putting the spotlight on La Doce.