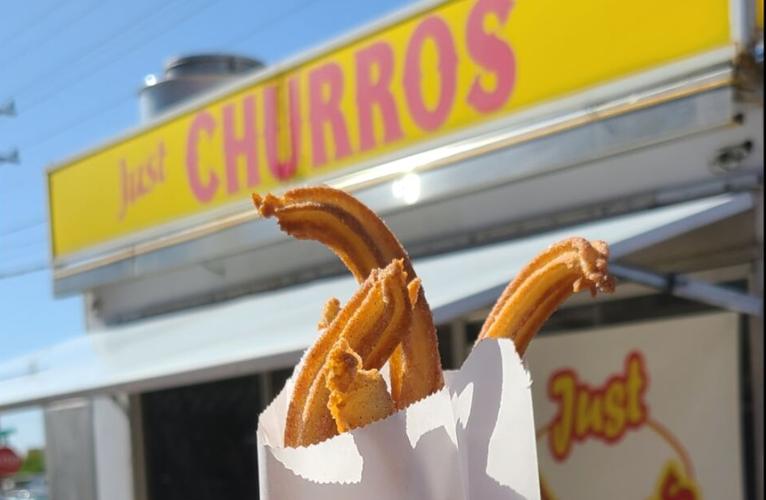 These churros are a Spanish-Mexican fusion, using an old-school Spanish recipe but Mexican toppings like cinnamon sugar and cajeta. 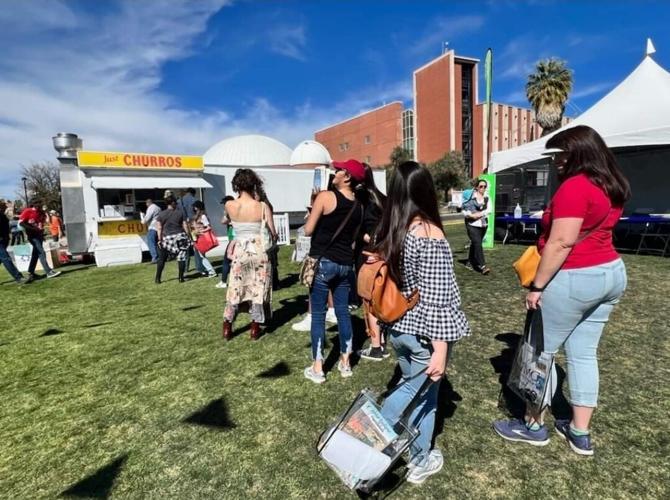 The line is long outside of Just Churros at an event on campus. 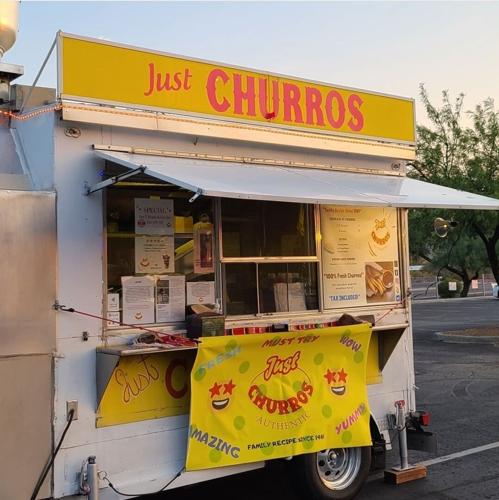 The iconic red-and-gold Just Churros cart is an homage to his tata Modesto Pintor's Los Churros. 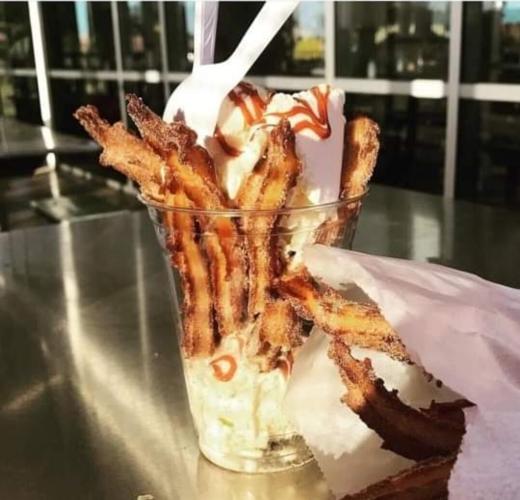 "The summer can be too hot for churros," Ricky said. So he added ice cream, and the adaptation blew up. 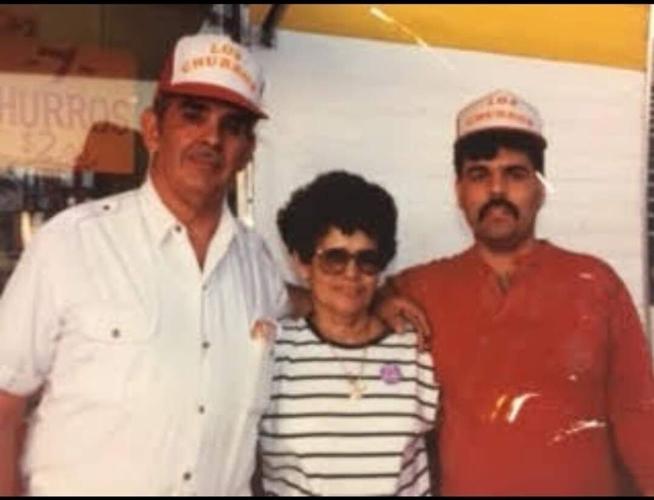 Modesto and Rick Pintor, the first two generations of Just Churros, are at the far left and right of the photo, respectively. It's their legacy grandson Ricky hopes to pass along at the brick and mortar, where he hopes to decorate using family photos. 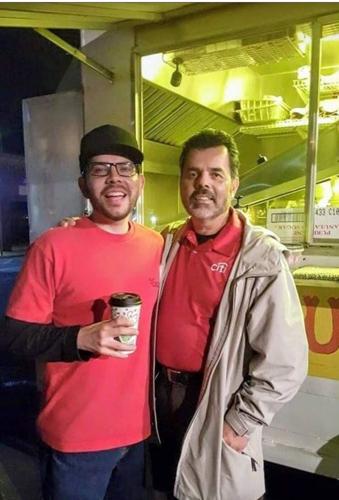 Rick (right) and Ricky (left) Pintor are the second and third generation churerros of the Pintor family.

He calls his churros Spanish-Mexican fusion because he makes them with an old-school Spanish recipe, but they are dusted with cinnamon as well as sugar, a Mexican invention. He is a third-generation churrero.

Ricky talks about his grandfather’s recipe like a crown jewel: something he will spend his life showing off and protecting. I imagine, when he invokes the sacred phrase, it’s capitalized: The Recipe.

Ricky’s food truck, Just Churros, is slated to open a brick and mortar, selling fresh churros alongside coffee, ice cream and champurrado, in the Oracle Wetmore Shopping Center, 4380 N. Oracle Road, on Aug. 31 — its 10-year anniversary. The milestone, however, is somewhat deceiving: the lineage of the truck dates back to 1981, when his grandfather, who he calls Tata, started selling his churros down in Douglas.

“He’d follow the carnival,” Ricky said. “He had a good relationship with the Cochise County Fair.” While Ricky has since put the finishing touches on The Recipe, this is where it all starts: in a signature red-and-gold trailer anointed Los Churros. Ricky adapted its iconic imagery into a spin-off food truck that you may have noticed around town.

“Originally, my grandpa was selling churros. And that’s how we got the name, because that’s all he’d sell. Just churros,” he said.

Though Ricky was born and raised in Tucson, he spent formative time in Douglas, visiting his Tata and helping out how he could.

“Tata would give me 20 bucks, and I’d go around playing carnival games, getting kids interested in churros,” Ricky said. “I was amazed at how long the lines would be to try his churros.”

When asked what makes his churros unique, Ricky will say: “I know this is a cliche, but” — his voice will switch registers, into a charmingly smarmy persona — “love.” His father died months before COVID changed the world: at the time, the father and son had plans for the business that were waiting for his dad’s retirement. His Tata died last June. “He’s up there making churros in heaven,” Ricky said.

Ricky first got involved with the churro business when he needed to make some money. He remembered the long lines of fairgoers waiting for his Tata’s churros and was inspired to bring the show to Tucson.

Ricky’s operation started out of his trunk. He’d go down to Douglas every weekend and make churros with his Tata in his backyard. He’d bring back the churros to Fourth Avenue, where he’d ply them on barflies. “There was a time when selling five bags was a good day,” he said.

Eventually Ricky garnered a large enough following to open a food truck, which had to be custom outfitted with a fryer and the churro machine his Tata made by hand. The machine is responsible for shaping the dough into the free-form, star-shaped sticks.

“In Mexico, people use their whole bodies, their stomachs, to form that shape by hand,” Ricky said. The exhausting process slows them down. His grandfather could scale up, make so many churros fresh to order, because of the machine he built by hand; in a way, his hands are still present shaping the churros today.

Ricky says he got his big break when the owner of Tucson staple El Güero Canelo, Daniel Contreras, tried his churros at the Fourth Avenue Street Fair. He loved the churros so much that he invited Ricky to set up the churro cart outside his restaurant.

While Ricky assiduously avoided sharing any details about The Recipe, the base of Spanish-style churros is a variation of choux pastry. (It’s not easy to make. Once, “The Great British Baking Show” had an esteemed technical challenge based on choux-nuts, or choux-donuts. “Aren’t those just churros?” I said to the TV.)

Made with boiling water, temperatures and humidity can dramatically affect the consistency of the pastry. One of Ricky’s greatest challenges mastering The Recipe was getting the feel for the changes that need to be eyeballed when it’s monsoon season and the dough retains more moisture, or when it’s cold and the water cools down too fast.

A crucial advantage of a brick and mortar is the protection from elements. With the food truck, harsh winds can force Ricky to cancel an appearance. Variable weather forces Ricky to improvise adapting The Recipe. Air conditioning removes such inconsistencies. When a product is so simple, it’s vital to get it right every time. Ricky pays close attention to the texture, and waits to hear the dough make a certain sound in the mixture. “Sometimes I talk to it while I mix it lol,” he wrote me in an email.

As Ricky prepares to open the churro shop, the food truck will still make limited appearances for events and is available for catering. Just Churros’ next appearance will be at the Marana’s Star-Spangled Spectacular this Sunday, July 3.

No one is more enthusiastic about the upcoming cafe than Ricky’s kids, ages 3 and 5. They’re already excited to contribute to the Pintor legacy.

“It’d be so awesome to become a destination spot for people who come to Tucson,” Ricky said. “I’d like that for Tucson, and for this legacy, the two generations before me who’ve passed. I have a wife and two kids, a three and a five-year-old.

“They’re as excited about it as much as I am. They’re already ready to go work. They want to be part of the experience, continuing the legacy.”

Price: at the food truck, a medium bag of seven churros costs $8.

For more information and to keep up with the food truck's locations, check out their social media: Facebook and Instagram.

Tucson, Arizona has waited long enough for our favorite time of year. Monsoon season 2022 is upon us! We've rounded up a list of restaurants with great views, under covered patios or behind floor-to-ceiling windows.

A new Thai restaurant just opened on Tucson's east side

Nattha's Bann Thai Asian is located in the former Peking Palace on Tucson's east side. The new restaurant serves Thai and Chinese dishes.

Flour tortillas are synonymous with Tucson, Arizona. Here are 18 local places to find them.