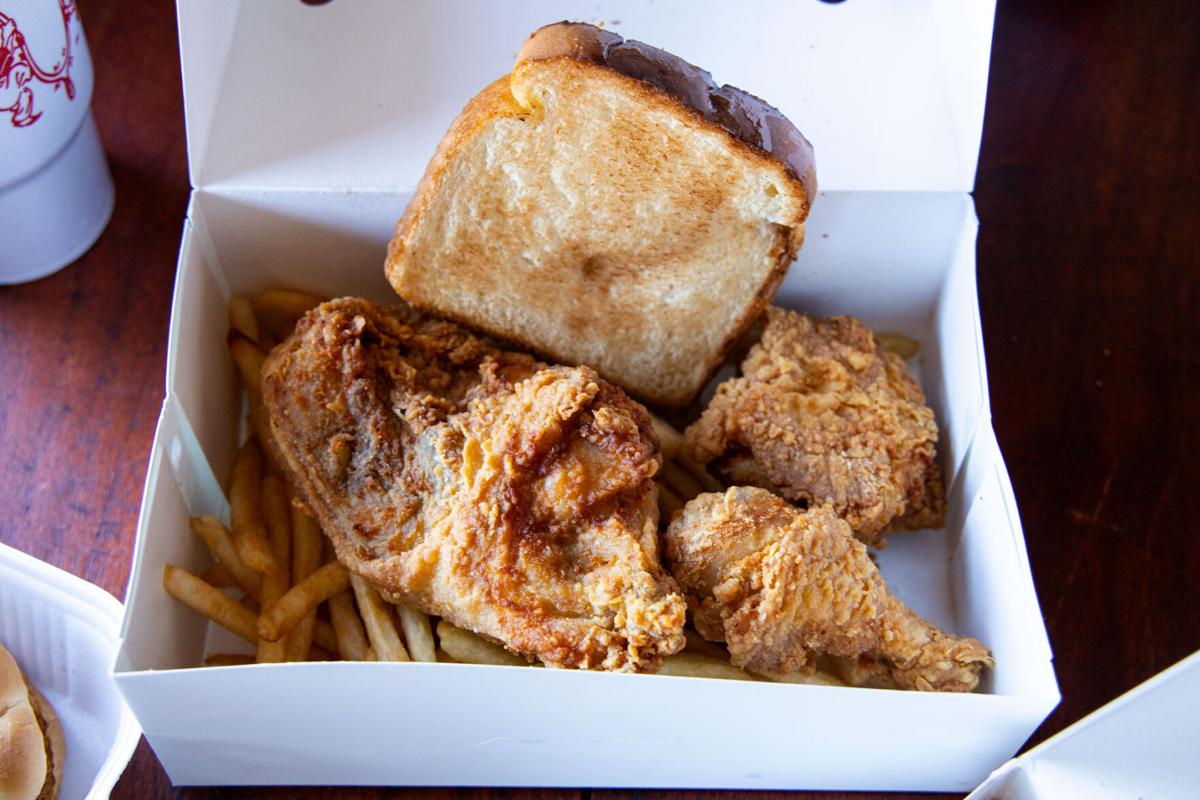 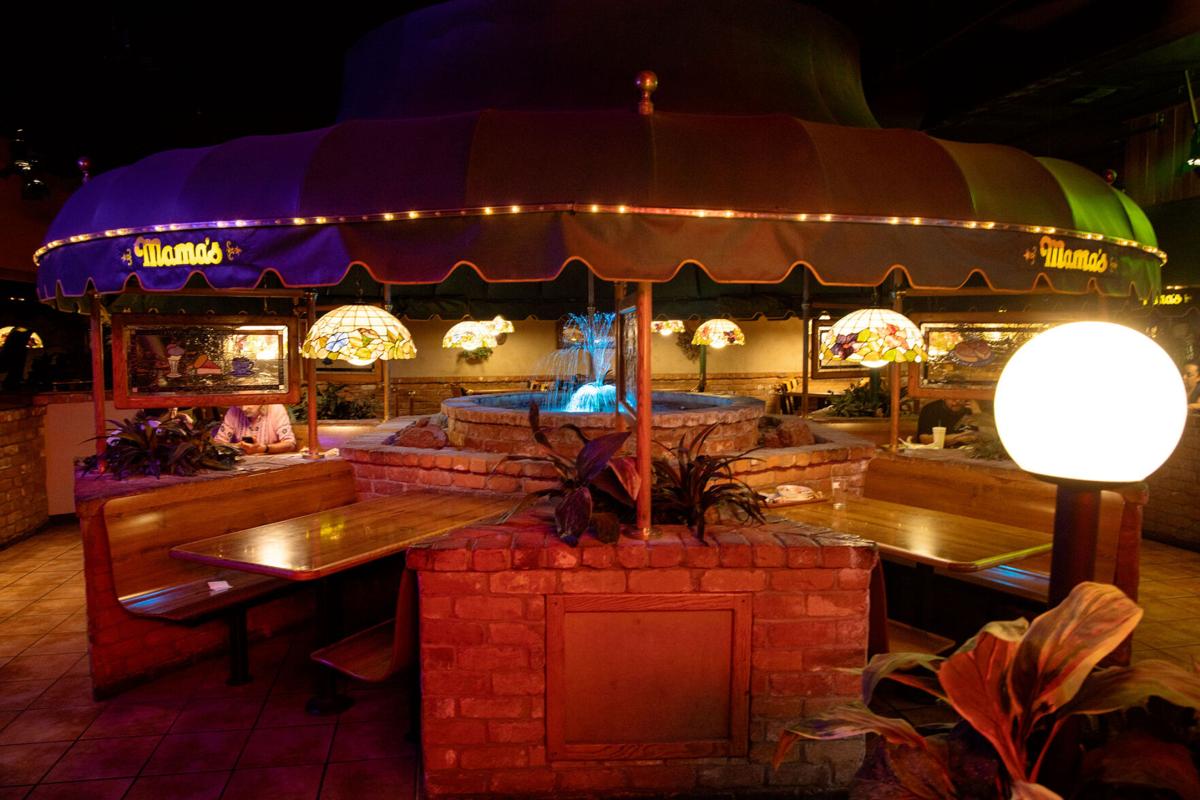 Mama's Famous Pizza has a dark, cavernous atmosphere that calms you into a cheesy pizza hypnosis. 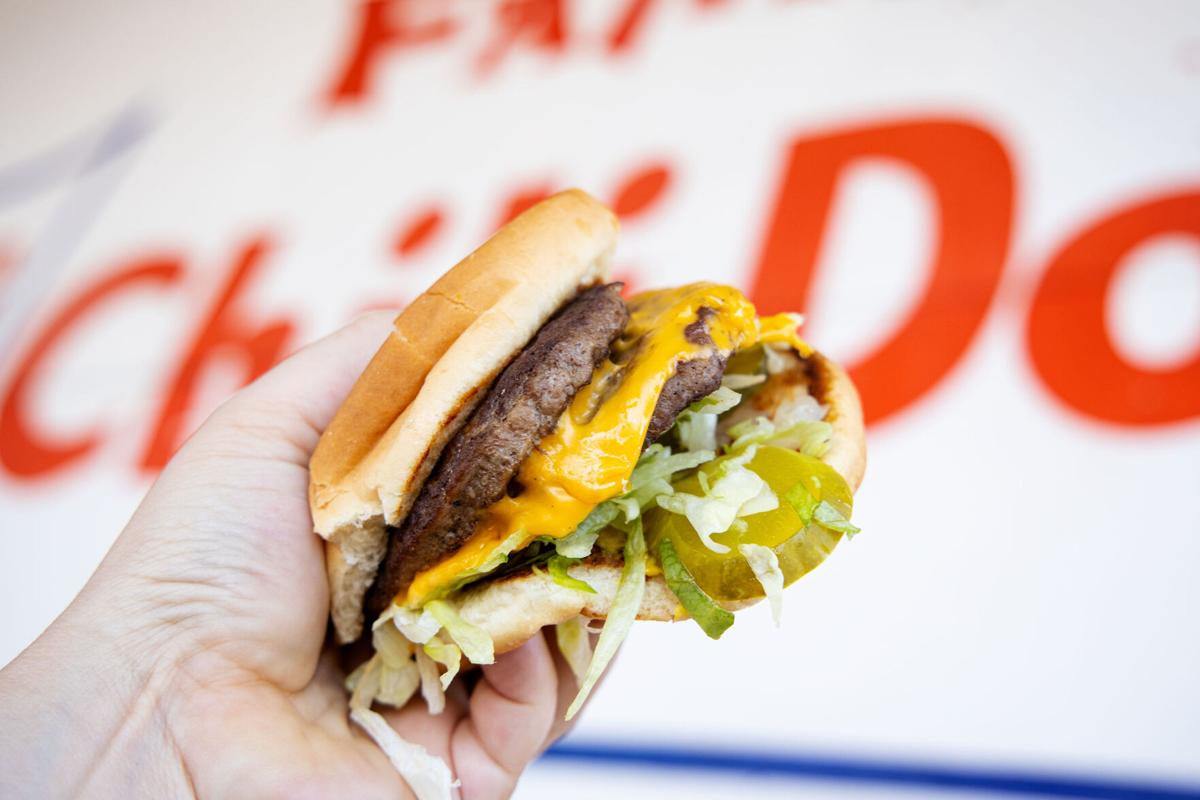 The Big Pat burger with cheese, $3.35, is my favorite item at Pat's Chili Dogs. 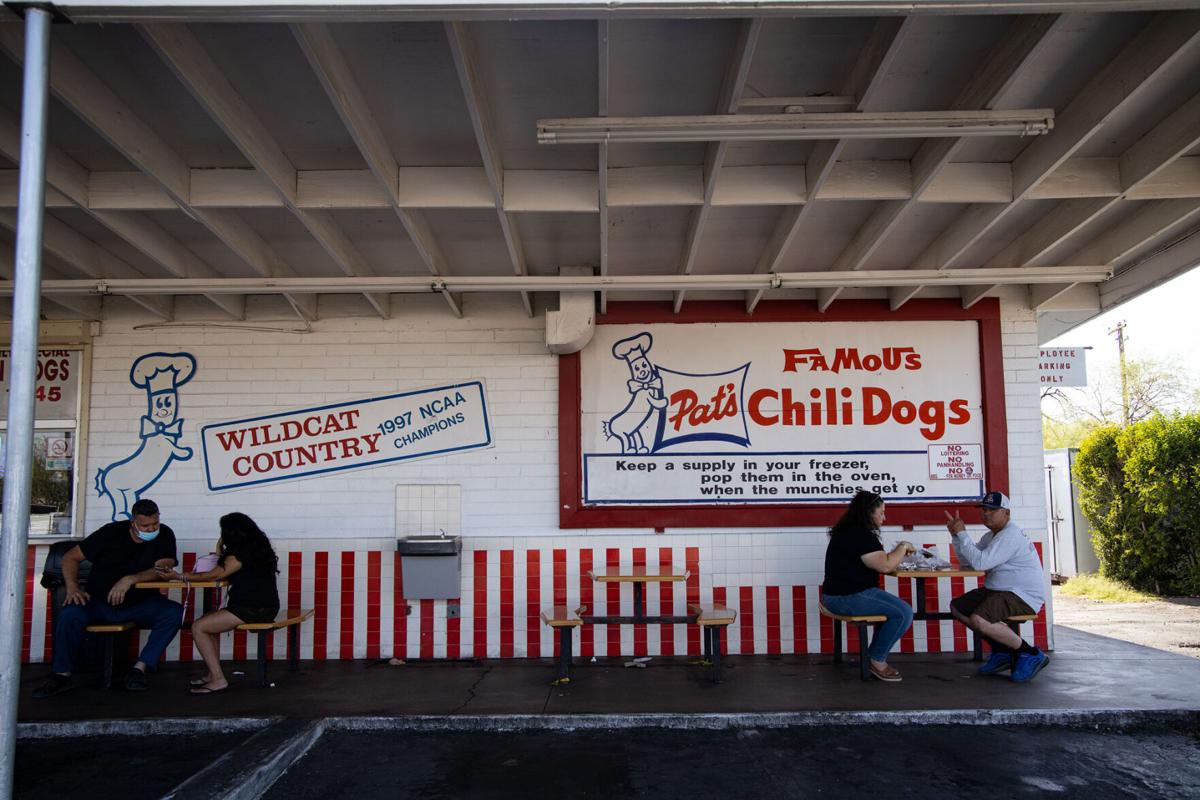 You know you're in for a treat when you see that hot dog wearing a chef's hat. 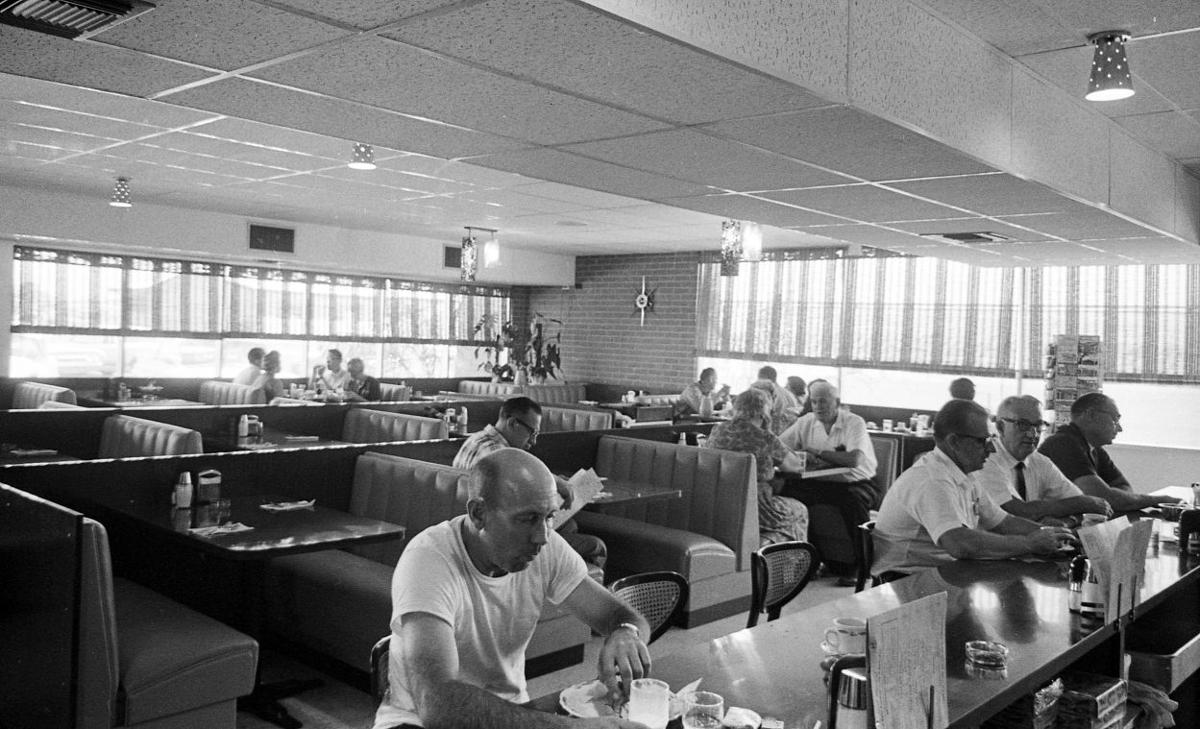 Looking the part: A trucker in a T-shirt eats a sandwich in the restaurant at the TTT Truck Terminal at Craycroft Road and Benson Highway in Tucson in June, 1966.

In Tucson we walk amongst old things and pretend that they're new. That's just what we do, living in a city threaded with relics of the past. Sometimes we forget the neon signs, the midcentury buildings and the weaving streets; They've been here for such a long time, even before we were! And that's what makes this place super duper slammin'.

I'm not trying to preach here, I just wrote that whole dramatic thing because I've eaten Eegee's like 30 times and just now realized that it's half a century old. Can you believe that? The local sandwich chain opened in 1971, the same year they ratified the 26th amendment and debuted Malibu Barbie. This historical tidbit made me realize I've been living in ignorance, and set me down a path of appreciation for Tucson's oldest restaurants.

Just doing a simple amount of internet research, I was stunned to find out that our city has dozens of historic businesses! Too many to list right here, and then I'd have to start talking about El Charro ... (Oops! Did it again.) So I'm narrowing this list down to five groovy spots. These places are the bee's knees! As a Tucsonan I've been going to them for years, but am just now starting to appreciate their history and what it can teach us about our city. I hope you enjoy, and eat a gizzard. I know that sounds like an old man's insult, but it's actually something that you can do. So get to it!

In 1953, gasoline cost 20 cents a gallon, the most popular TV show was "I Love Lucy" and people were deep-frying foods up and down the pyramid. I'm not going to pretend to be a historian, but these factors may have paved the way for Lucky Wishbone's entrance, on a hot July day at Irvington and South Sixth Avenue. At the time Lucky Wishbone was Tucson's first fast food restaurant, and served a menu of fried chicken, fried shrimp, French fries and fried steak fingers.

This original location doesn't exist today, but the second location at 4701 E. Broadway still sports an original blinking neon sign in the shape of an exploding sun. You know, the one that blinds you as you drive by and makes weird buzzing noises ... The building itself was replaced about 10 years ago, but the inside still has that vintage fast food look, complete with an old menu board featuring pictures of various fried food baskets. (There's also a wall of people posing with giant pigs and other livestock and fish, but I'm not sure if that's vintage?)

Stuffed in a white paper box emblazoned with a cartoon Pinocchio, my meal tasted like something I'd imagine people ate in the '50s. There was fried chicken and some buttery Texas toast, all paired with a special sauce that tasted very much like cocktail sauce. I also got a packet of chicken gizzards and livers, which were shaped into fried little balls that were chewy like squid. "The people's calamari," I declared.

Pat's Chili Dogs is a slice of classic Americana, and it's also a local landmark in the historic west-side neighborhood of Barrio Hollywood. The drive-in got its start in 1955, a couple years after Lucky Wishbone, and was owned by Henry "Pat" Patterson, who opened four of them across the city. The remaining location actually dates back to 1961 (the year they built the Berlin Wall!) and was transferred to longtime employee Carlos Hernandez in 1979.

In a town dominated by Sonoran hot dogs, the classic American chili dog doesn't seem to have much footing. That's why it's so interesting that Pat's is still around and such a beloved part of this community. But the folks here do give it a Tucson touch. The chili is actually a little bit spicy, because it's mixed with cumin and chiltepin peppers. My dog was still on the milder side, but it apparently differs from day to day.

I think my favorite thing on the menu is actually the Big Pat, a double cheeseburger with lettuce and pickles. It's definitely not gourmet — to be honest, none of this food is — but who doesn't love some melted American cheese on a burger. I ate it on the patio while people lined up to watch them slinging dogs through the window, and kids with masks on their heads ate French fries in the car.

You'll see the sign from the highway: Three red T's that are stuck so close together, they almost look like a pile of crosses from the Bible. But that may not be a coincidence, because the TTT is a pilgrimage of sorts. The vintage truck stop has been a fixture of Tucson's east side since 1966, and was quite the scene when it opened, as you can see from this old photo gallery. It had a clothing store, a laundromat, overnight accommodations, showers and even a barber shop.

The restaurant was renamed Omar's Hi-Way Chef in 1996 after its manager Omar Ramirez. The 24-hour diner still sports a bright midcentury vibe with some Southwestern accents. I made it the last stop of my breakfast burrito journey back in 2017, when I consumed a TTT burrito at 5 in the morning and felt like I was still literally asleep and in one of those dreams where you don't know where you are, but you got somewhere to go!

Otherwise, the place is known for its deep dish hot apple pie, which comes bedecked with a Matterhorn of vanilla soft serve. The website also says something about a Sallie Sue's Adult Beverage House, which has a "state-of-the-art computerized bartender that is capable of mixing 600 different drinks." I have not witnessed this in action but it is intriguing nonetheless.

Sullivan's Eatery and Creamery - Since 1977

I had to include this on the list because lots of us have nostalgia for Swensen's, the suburban chain of banana split joints with a vintage San Francisco atmosphere complete with frosted glass and Tiffany lamps. Apparently this chain is based in Canada now and has locations in Singapore and Pakistan?

Well the Tucson Swensen's opened in 1977, but was renamed Sullivan's in 2013 when the franchise owners, the Sullivan family, wanted to branch out. The place still looks the same though, and even has a little toy train that drives around the ceiling and goes "choo choo."

Sitting in the old timey parlor, I once watched a competitive eater consume 30 scoops of ice cream with 10 toppings in six minutes. (With scores of Instagram influencers clamoring for an up-close video.) But other than that, the menu sticks to the basics like shakes and malts, ice cream sodas and one new creation that's basically sweet potato waffle fries topped with a scoop of vanilla ice cream. Sweet!

There is no other restaurant like this in Tucson, where you can eat fried raviolis under a giant umbrella next to a neon fountain. I'm not sure what time period this is supposed to resemble, but it reminds me of "Cheers?"

Mama's Pizza has roots in Long Island and New York, where Italian Americans the Spina family are from. The family uprooted to Tucson and opened their first pizzeria by the university in 1981. That location is no longer here, but the one at 4500 E. Speedway still feels like a time warp, complete with old arcade games and a claw machine.

I went big this week and ordered a large pizza with sausage, mushrooms and peppers. Although the sauce could have been a little more flavorful, the texture was classic New York and reminded me of some of the better pies I've had back east. I didn't grow up with this place, but it felt nostalgic nevertheless. And the leftovers have lasted me all week, reminding me once again, that old can become new ...

A traditional recipe, salsa macha or salsa de aceite, is gaining popularity at Tucson restaurants and food trucks. Here's where to get this spicy chile condiment.

Here's what to get from Flora's Market Run, a gourmet grocery wonderland

This is the most ambitious project yet from the team at Prep & Pastry. They're making fresh pasta and have an in-house charcuterie program where they're curing meats for you to eat on the patio.

On my last day, here are the Tucson food memories I'll cherish forever

Our food writer Andi Berlin is leaving for the Arizona Republic after seven years in Tucson at the Arizona Daily Star. She looks back on some of her favorite dishes and friends she met along the way.

Reilly Craft Pizza in downtown Tucson is getting rooftop dining 🍕🌃

For two Saturdays in June, Tucsonans can snap a photo with Hub Ice Cream's vintage truck and post it on social media. In exchange for a screenshot of the post, Hub is offering a free scoop of ice cream.