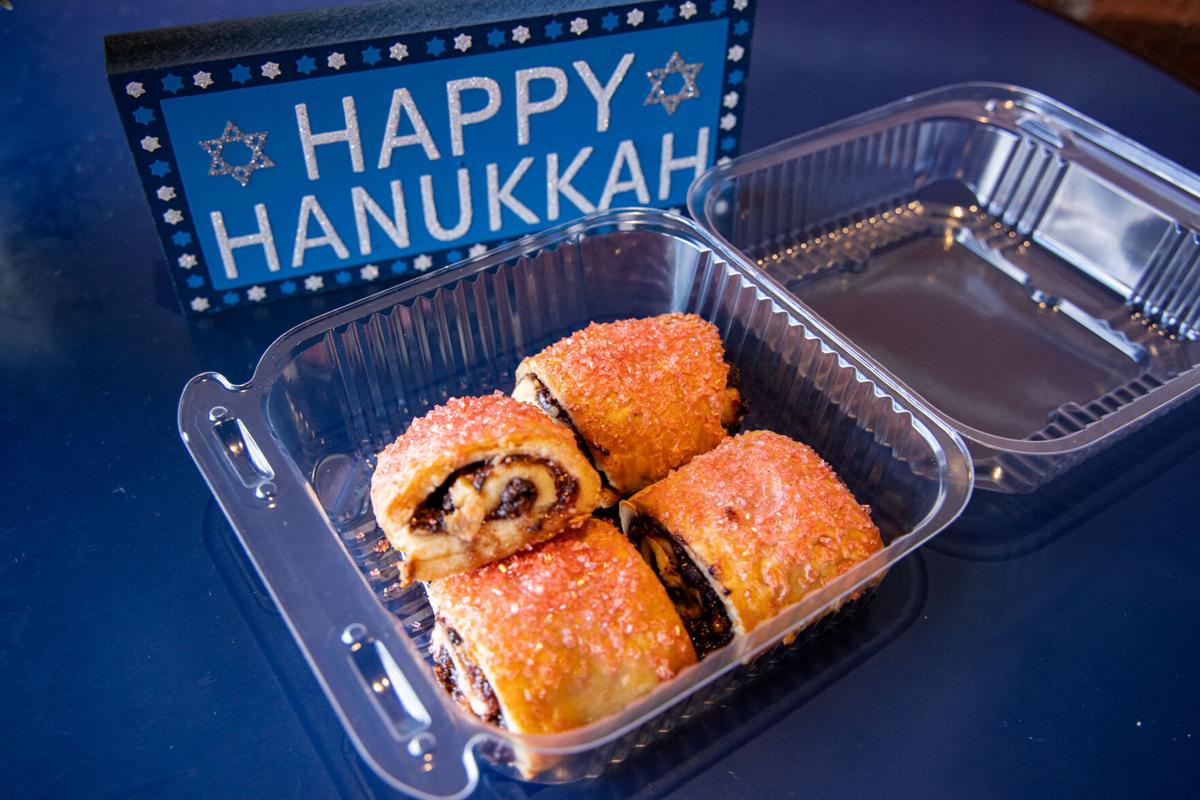 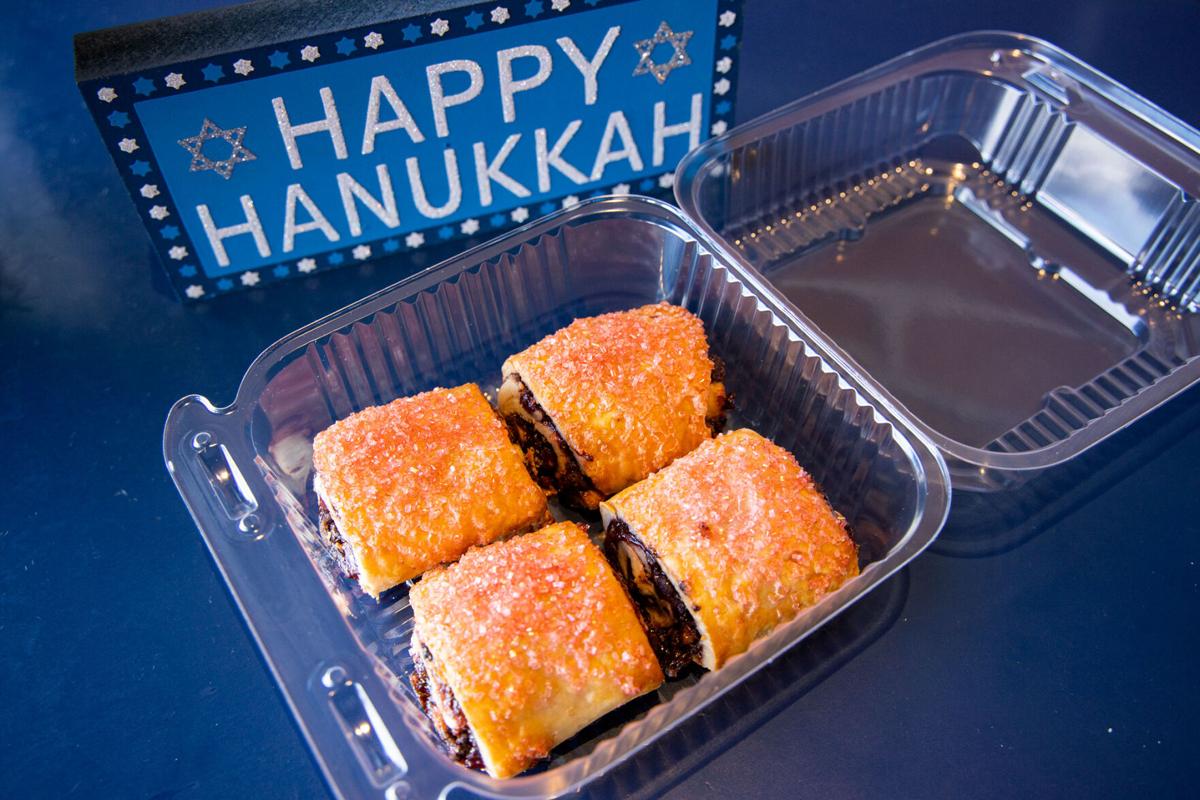 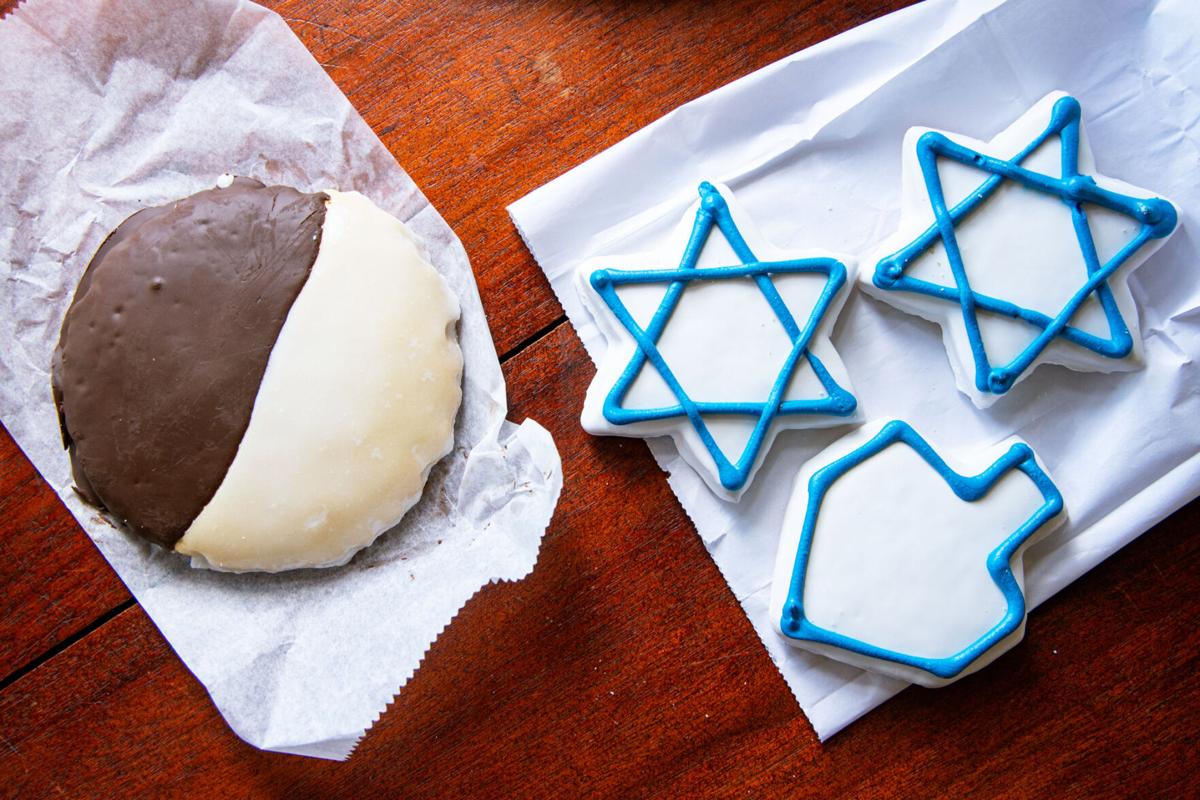 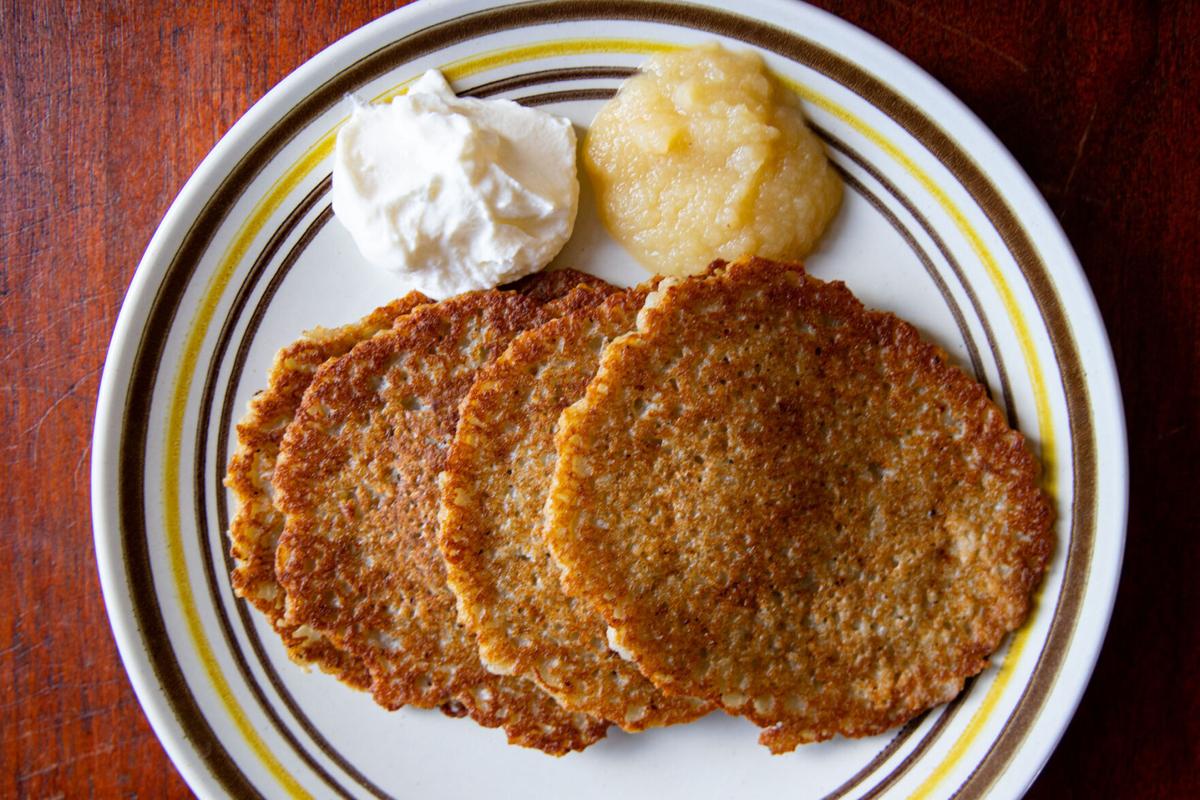 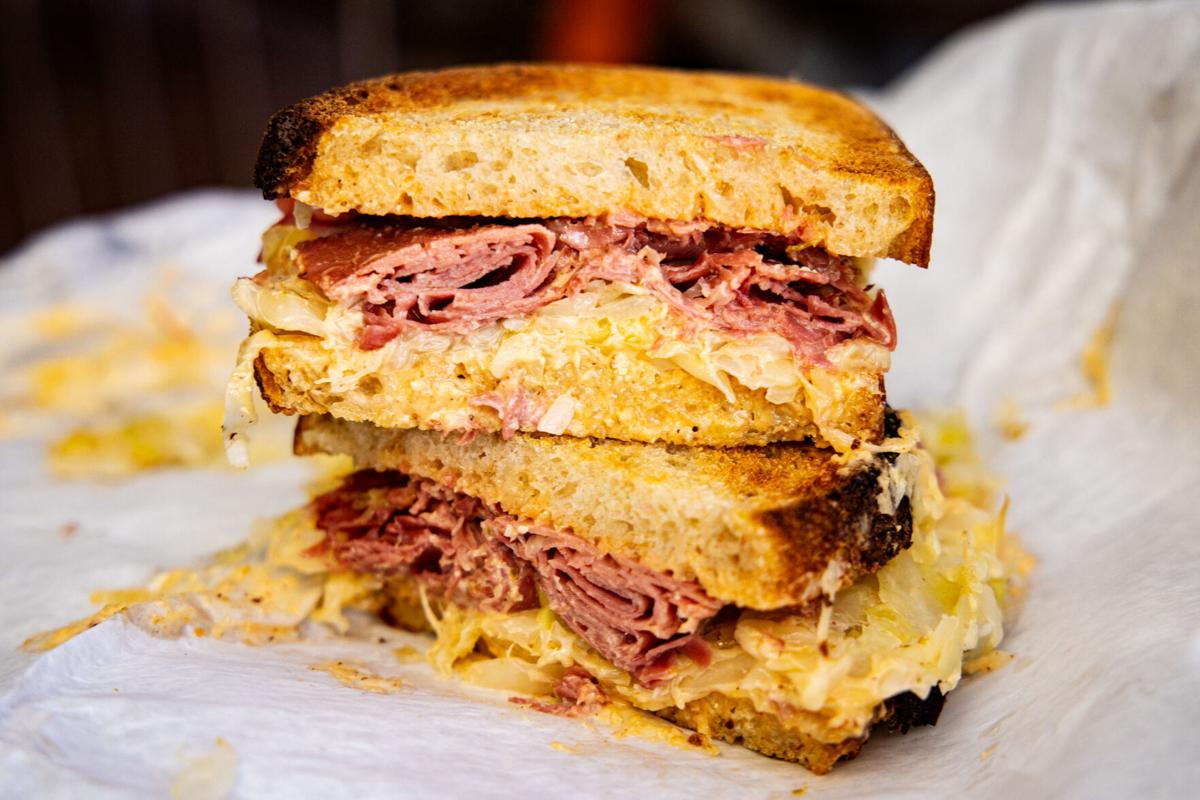 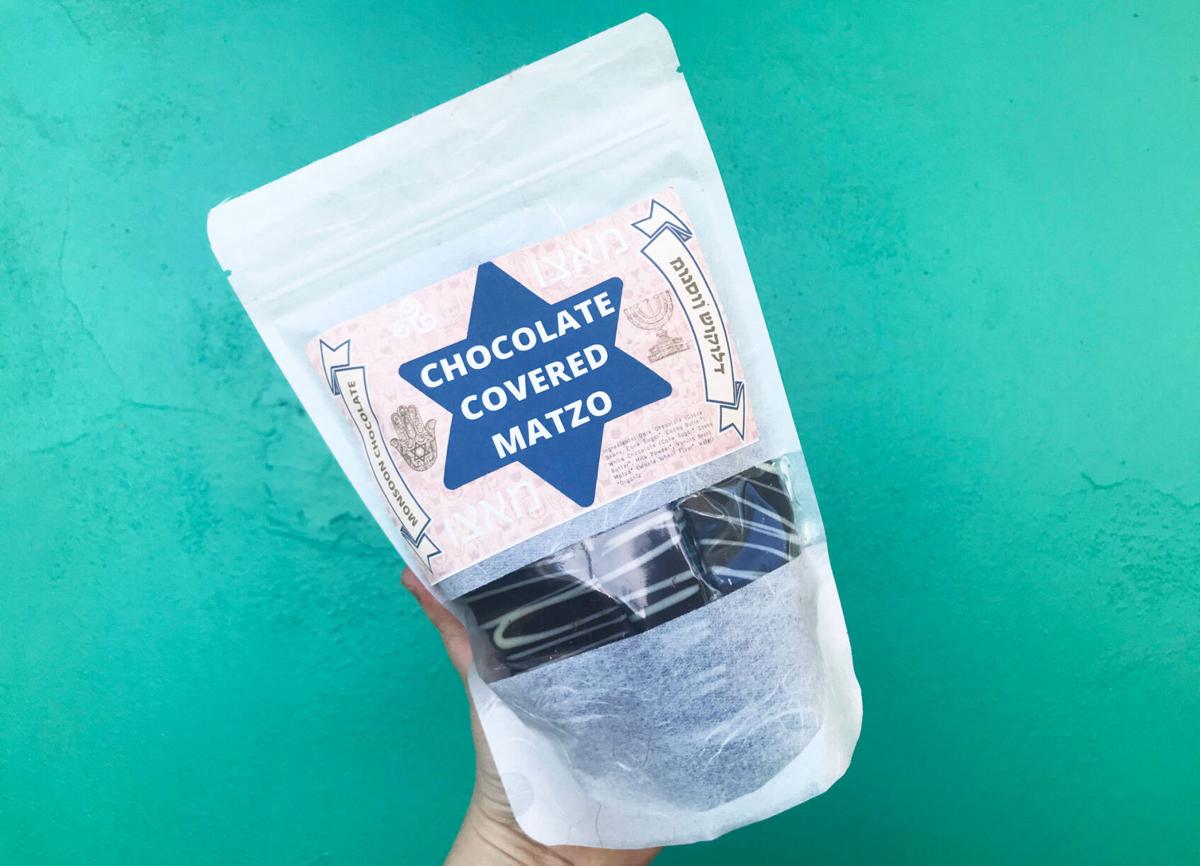 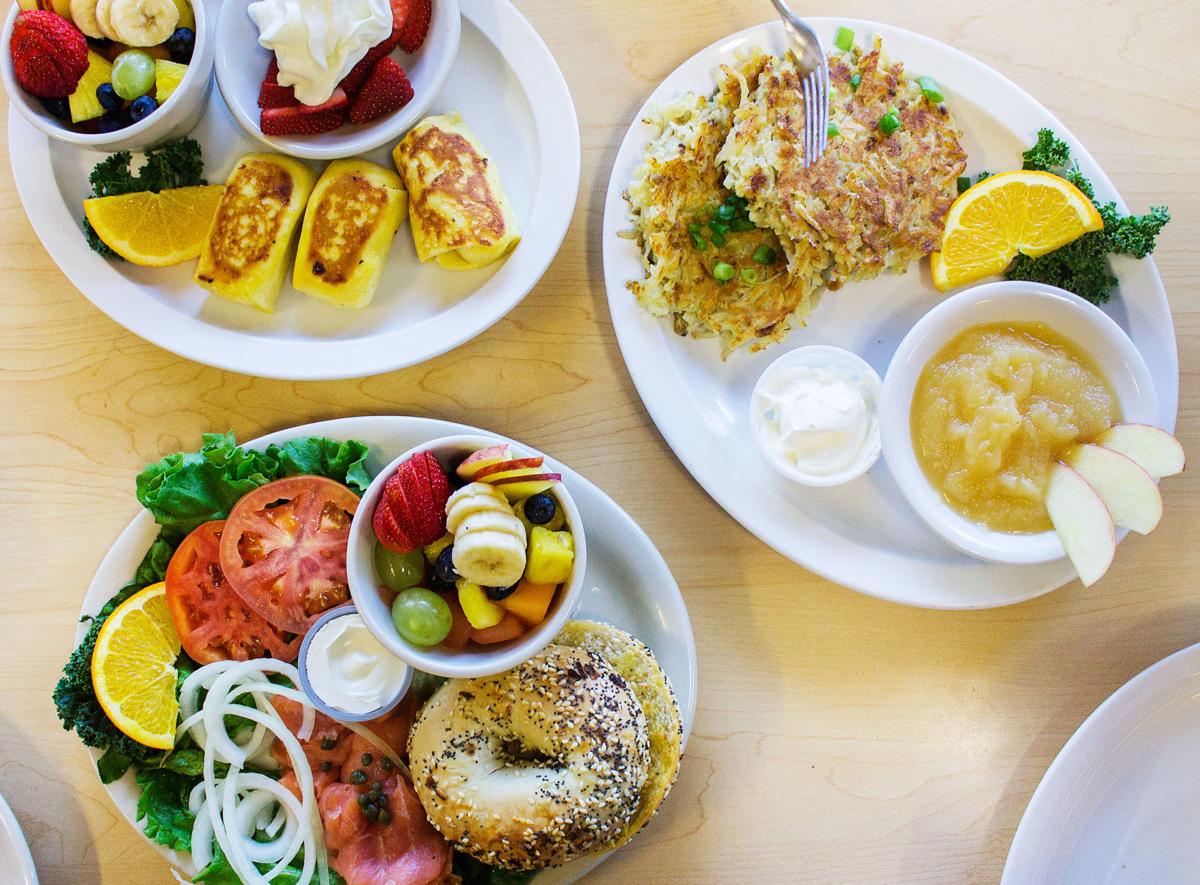 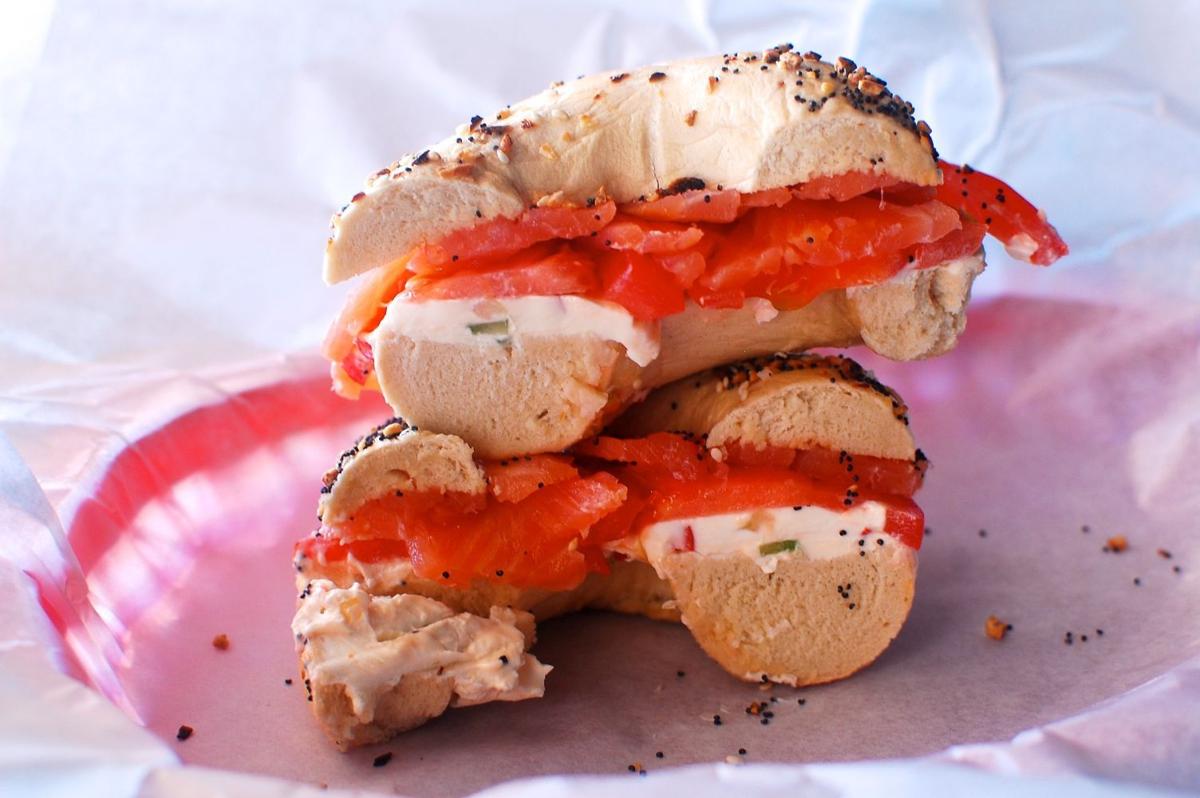 The Bagel Joint does an everything bagel and lox, with tomatoes and veggie cream cheese, for $6.50.

Tucson may have a vibrant Jewish community of thousands of people, but finding our food has always been a schlep. (Up to Phoenix, for the most part.)

If I could tell you how to get a decent bowl of matzah ball soup in this town, I would. But unfortunately I don't cater. 😛 So this list of Jewish foods doesn't have soup, sorry about that. But it does have chocolate covered matzah! And rugelach, and blintzes, and latkes ... We may not have a full Jewish deli or even a kosher market anymore, but we do have lots of dedicated chefs who are using their restaurants to serve traditional Jewish foods.

Here are some items I was able to track down over the past week. My list mostly sways toward Eastern European classics that you might see at a New York deli. But it's important to note that foods like falafel and Israeli couscous are also part of the Jewish repertoire. So consider this list a starting point, and if you have more suggestions make sure to email me at aberlin@tucson.com. Happy Hanukkah!

Much of the Jewish food we know derives from Eastern European countries like Russia and Poland. So it's no surprise that this midtown restaurant serves a lot of familiar comfort foods, like stuffed cabbage (although it's made with pork). The menu also has potato pancakes, which they call Placki Ziemniazcane ... but the dish is the same. Perhaps a little thinner than regular latkes, but still paired with sour cream and apple sauce like your mom would do.

Restaurants across Tucson serve this New York deli staple, but my favorite has always been the Classic Reuben at Time Market. Their housemade pain levain bread sets it apart from other versions, but I do love their sauerkraut, which is also housemade.

Nadines happens to be one of the finest bakeries around town, but it's also the only kosher-certified bakery in the city. I was able to purchase challah bread rolls for Thanksgiving, but the shop also has a large variety of Jewish sweets like rugelach and sufganiyot jelly doughnuts traditionally eaten during Hanukkah. You can also purchase the iconic black and white cookie, or these Jewish themed sugar cookies to celebrate the holiday.

Local chocolatier Adam Krantz does a lot of his business during the holidays, and this is a fun item that can double as a Hanukkah gift. He takes Manischewitz matzo crackers and coats them in their 69 percent dark chocolate blend and then drizzles on vanilla white bean chocolate made from Ugandan vanilla beans. It's like a chocolate covered pretzel but more nostalgic.

Bagel and lox from The Bagel Joint

Best bagels in town, hands down. Boston native Michael Rudner has been running this place since 2016 and boils his bagels every morning. The bagel and lox sandwich comes with Nova lox, capers, tomatoes and red onions, just like it should.

Challah bread and matzah brie from the Café at the J

Rugelach and challah bread from Beyond Bread

The bakery at this popular sandwich joint does some of the best rugelach I've had in recent memory. During my visit this week, the strudel-like pastry was stuffed with a sweet raspberry filling, with pink sugar crystals on top. Beyond Bread also does challah bread on Fridays.

Blintzes and latkes from Claire's Cafe in Catalina

Chicago-native Claire Johnson is a commanding presence who makes some killer potato latkes. But Claire's also has a full breakfast menu of omelets, pancakes, French toast and more for the non-kosher kinda folks. During my latest visit, I split an order of the cheese blintzes, a bagel and lox platter with some spectacular buttery salmon, and the crispy latkes.

Shakshuka from The Coronet

Forgive me for realizing this existed so close to deadline, and not giving myself enough time to try it. Because this looks amazing! Shakshuka is a Middle Eastern dish that has ties to the Jewish religion, and is just starting to get popular around these parts. Coronet's version, available for breakfast and lunch, has a spicy tomato sauce, chickpeas, Feta cheese and an egg on top. I can't wait to taste it with some fresh flatbread.

La Chingada is going into the former Alejandro's Cafe on Scott Avenue, which served casual burritos and more. the Mexican brunch spot will have Sonoran and American brunch dishes like chilaquiles, enchiladas and more.

Speedway has become a corridor for awesome Japanese and Korean food. And Fourth Avenue is waking back up after a six-month slumber, with three new restaurants this month. So many options in the Old Pueblo!

There's no place like HOME for the holidays. Here's what Pima County health officials are recommending.

With COVID-19 cases continuing to surge in Pima County, putting a strain on healthcare workers and hospital capacity, the Pima County Health Department and other healthcare providers and first responders are urging families to to avoid gathering with family and friends who are not part of your household.

Top 10 food list of 2020: the dishes, restaurants and people that made Tucson delicious

It was a hard year for Tucson's restaurant scene, but chefs and restaurant workers excelled and did some amazing things. This article celebrates them and their hard work throughout the year.

Celebrate Hanukkah in Tucson with these nine local events, including menorah lightings, a story time with the Tucson Jewish Community Center and a handful of virtual happenings.