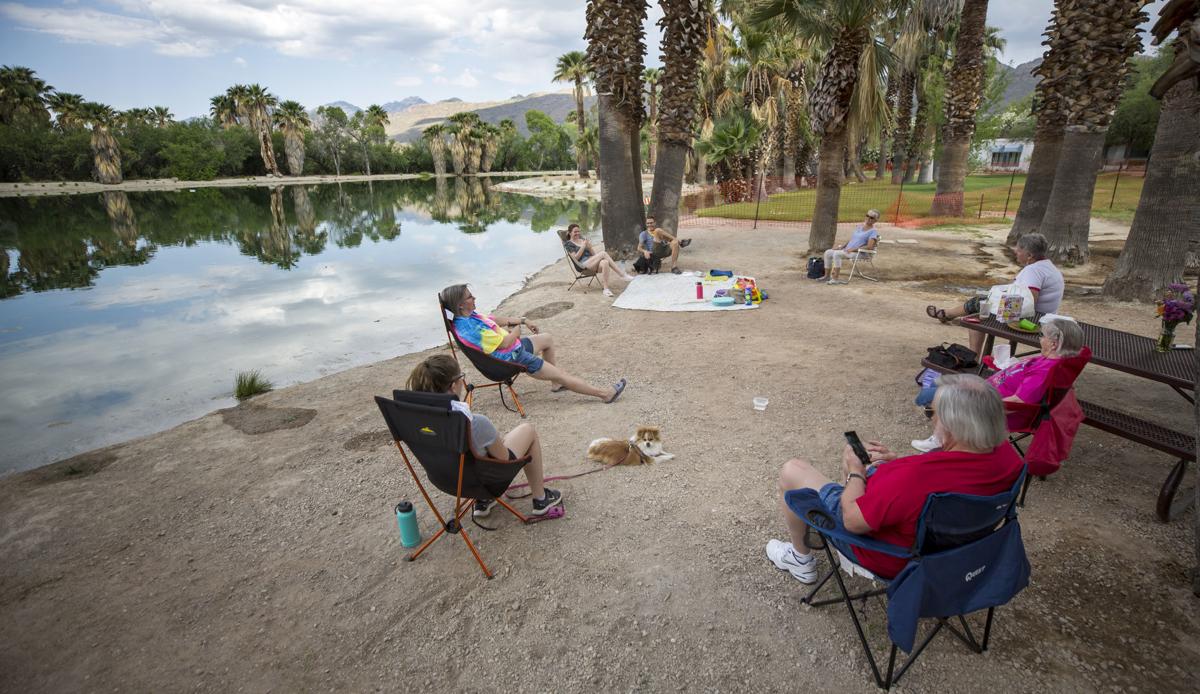 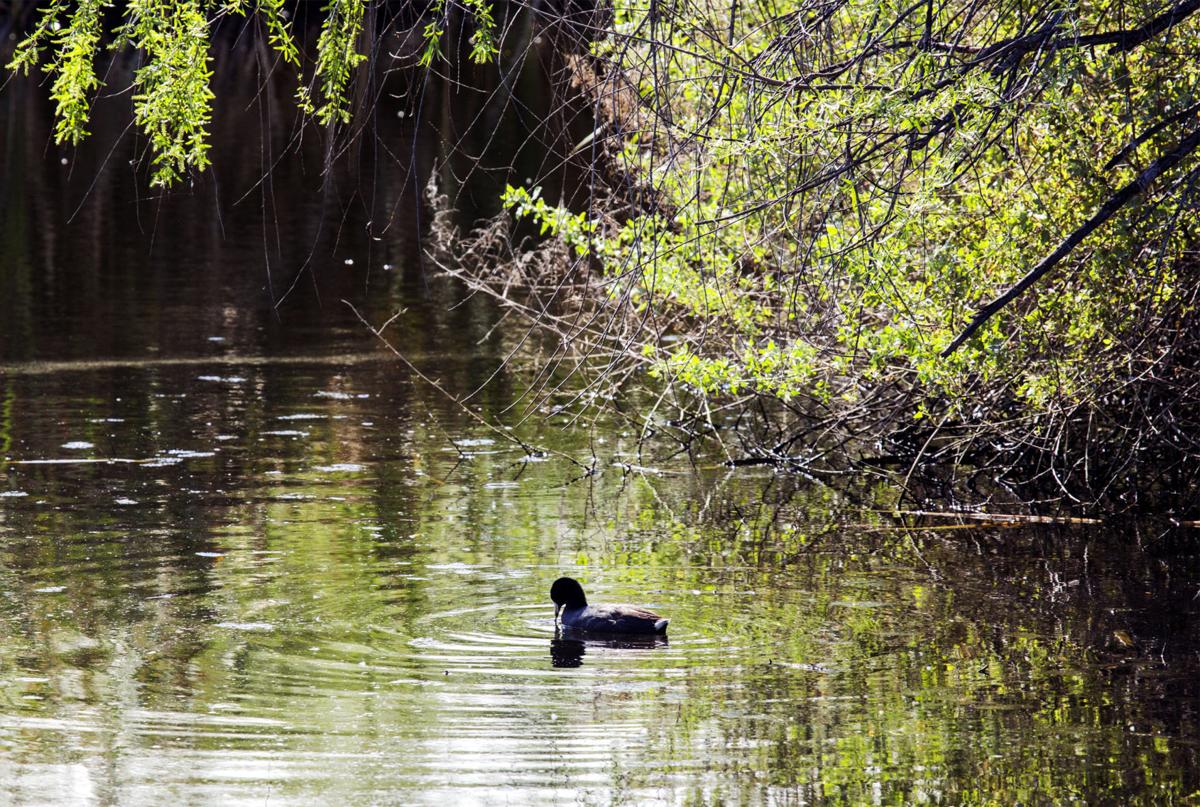 The 18-acre Sweetwater Wetlands, just off Interstate 10 at West Prince Road, are a haven for ducks and birds. You may even see a bobcat at the site, which is part of a water treatment facility. 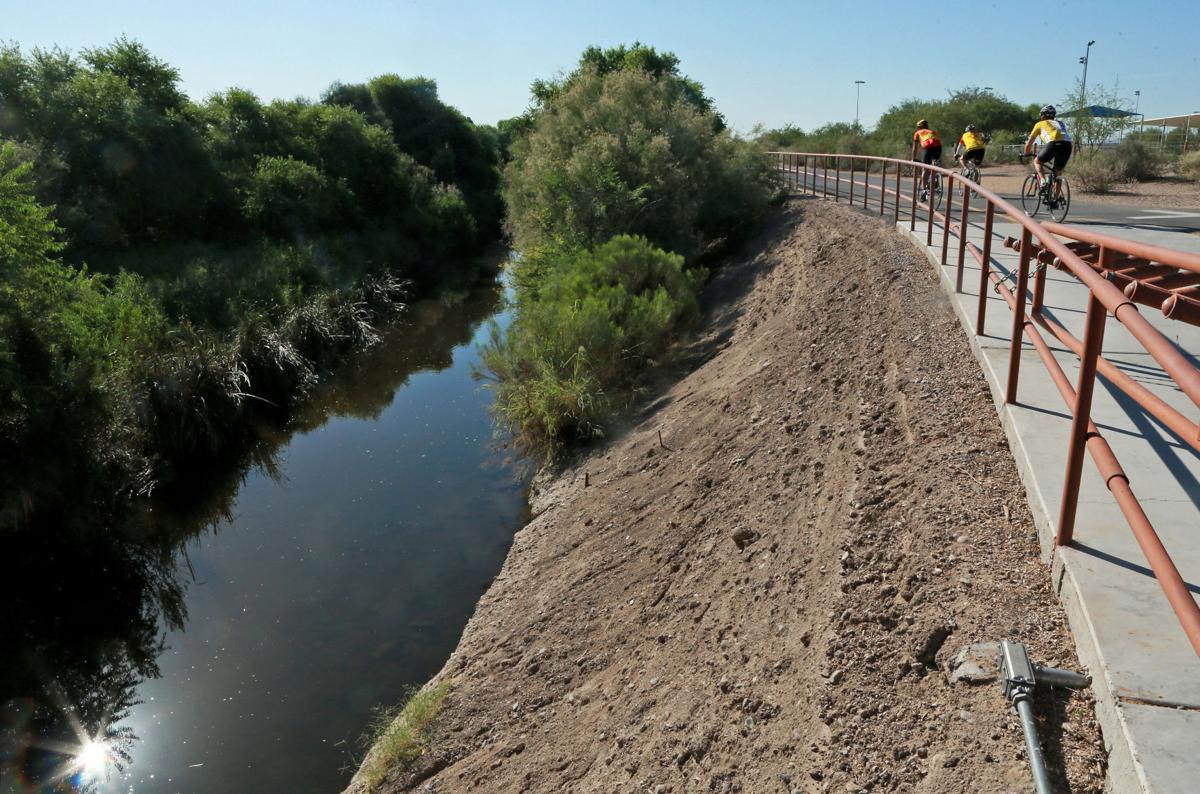 The ecology of the Santa Cruz River south of Cortaro Road in Tucson, AZ, has improved markedly since the completion of the Agua Nueva water treatments facility and improvements at the Tres Rios treatment facility according to a recent study of the Lower Santa Cruz River.

Here in the desert, we know water is precious — especially after a monsoon season that left much to be desired.

And while naturally-flowing sources of water are the most magical, they aren't always reliable during dry seasons.

Luckily, Tucson has a number of places where you can find water throughout the year. Take the picnic blanket or plan a stroll along these local lakes, rivers and ponds.

Because who couldn't use a tranquil change of scenery these days?

Accessible from the Loop, the city's Sweetwater Wetlands, 2511 W. Sweetwater Drive, has several observation decks and more than two miles of pathway winding through the facility.

The wetlands are sustained by reclaimed water and home to fish, birds, turtles, frogs and other critters. Tucson Water has created a digital guidebook with info about the wetlands and profiles of all the animals and plants you might spot on your visit. There's also a Sweetwater Wetlands Bird Checklist. Dogs and bike-riding are not allowed in the park.

Agua Caliente Park, 12325 E. Roger Road, is named for the warm spring that historically filled the area's manmade ponds. The main pond at this northeast-side park was recently restored, and you might even spot the endangered Gila topminnow flitting around its depths. The park has more than one pond, although the newly restored one is the main attraction.

There's no fishing, wading or swimming in the pond but there is wildlife to watch. There's an Agua Caliente Park Bird List if you want to wildlife watch with a purpose. Throughout the spring's history, the water has been channeled and directed into multiple ponds, but in recent years, as the spring went dry, the county has pumped well water to sustain the main pond, according to a history of the park.

Reid Park, 900 S. Randolph Way, is midtown's urban oasis. This massive park (and home of the Reid Park Zoo) has water features that include a giant pond, fountain, plenty of ducks and a waterfall to create that peaceful bubbling brook vibe.

There are also mature trees for shade, lots of grass and abundant walking paths to keep you active.

There are two stretches of the Santa Cruz River in Tucson where you're likely to see water. One is just south of downtown and the other is near Crossroads at Silverbell District Park in Marana. Both flow along stretches of the Loop thanks to the release of reclaimed water, or effluent.

Water releases in the downtown stretch of the river have fluctuated since Tucson Water began releasing effluent last summer, so you're likely to see a steadier flow in Marana. Whichever location you choose, we suggest taking a walk along the Loop to spot the dragonflies, birds and other wildlife the water supports.

Silverbell Lake, located at Christopher Columbus Park,  4600 N. Silverbell Road, is 13 acres and allows both fishing and non-motorized boating. Make sure you have the proper licensing and permits, as well as flotation devices. No swimming or wading is allowed at Silverbell Lake.

There is also a smaller lake at the park for model boats.

For more information, visit the website for Christopher Columbus Park.

Moving to Tucson: 10 insider things you should know

If you are moving to Tucson, Arizona, new to Tucson or have lived here for years. Learn about the weather, Santa Cruz River, our UNESCO City of Gastronomy, monsoon season and the ASU vs. UofA rivalry.

Water here is precious, absolutely, but it's also present — you just have to know where to look.

The Santa Cruz River is flowing again near Tucson's birthplace

4 nearby Arizona lakes for swimming this summer

Nothing says summer like a lazy day lounging around a lake while the kids play in the water.

Things to do this October 2020 in Tucson, Arizona including virtual events, drive-ins, drive-thrus, open-air events and Halloween and fall things to do, Oct. 21-25.

While festivities may look eerily different this year with the Pima County Health Department recommending that the community avoid door-to-door trick-or-treating, Halloween parties, haunted houses and festivals all events that can put you in close proxmity with others, Tucsonans are getting real creative to make sure kids and families can still enjoy some Halloween magic.

Chances are you've probably walked by or visited some these of these haunted Tucson places and felt some weird vibes or seen something you can't explain, you're definitely not alone. Muahaha!

Where to find local Tucson baby gifts for expecting parents

While you can't go wrong with giving essential baby gifts like diapers and wipes, if you're looking for something special, try some of these infant gifts from Tucson baby stores, makers and services.

31 creepy-fun things to do in Tucson this Halloween weekend, Oct. 28-Nov.1

Things to do this weekend in Tucson, including virtual events, open-air events, drive-ins, drive-thrus and fall things to do, Oct. 28-Nov. 1

Save your money and entertain your family and friends with free events, activities and things to do happening in the Tucson, Marana, Oro Valley and Sahuarita areas.

Things to do this November 2020 in Tucson, Arizona including virtual events, drive-ins, drive-thrus, open-air events, at-home things to do and things to do with kids.

5 Tucson hikes to take with your family Thanksgiving 2020 weekend

These hikes will take you into the desert to see towering saguaro cacti, beautiful views of Tucson, Arizona and even a stone house long deserted. These are mostly easy to moderate hikes you can do with family.

Many Tucson fitness studios and gyms are offering classes outdoors during the COVID-19 pandemic. Classes in Tucson parks and parking lots provide room for both social distancing and connection.