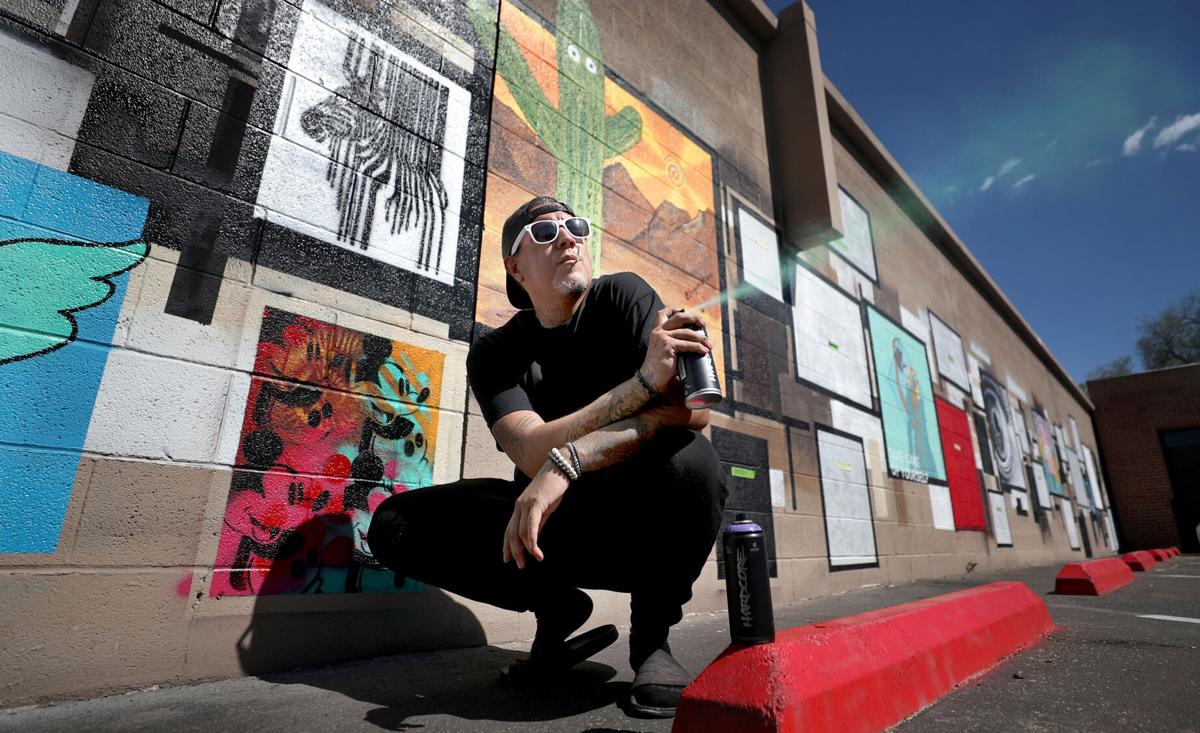 Jason Lee Nolan, posing for photo in front of his Living Mural in Tucson, Ariz., April 29, 2021. Nolan, a muralist himself, plans to rotate artists through designated spaces on the walls of the buildings on and around his Black Crow Tattoo and Gallery at 426 E. 7th Street to discourage tagging as well as to give artists a chance to show off their works. 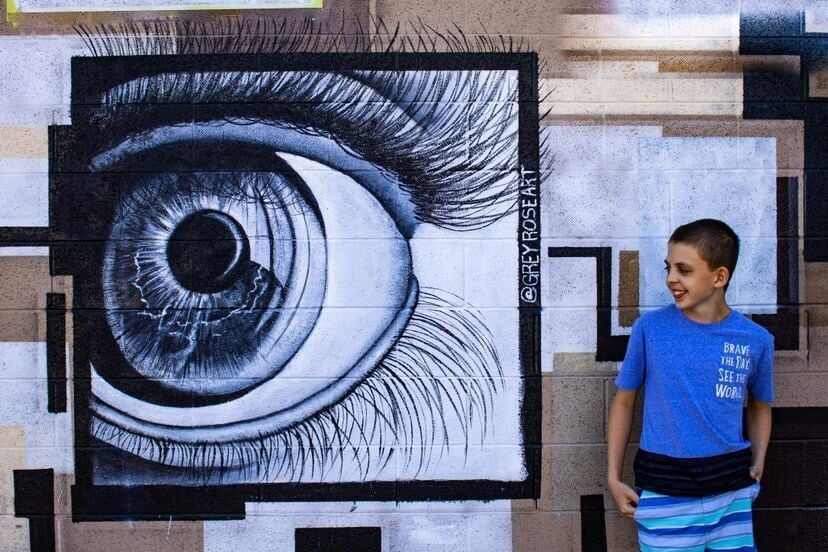 Amanda Hinton's son Greyson poses with the design she painted on the Living Mural. It's the first mural Hinton has painted. She paints detailed images on rocks and wanted to challenge herself to create a larger piece.

Jason Lee Nolan's the Living Mural, Tucson, Ariz., April 29, 2021. Nolan plans to rotate artists in spaces on the walls of the buildings on and around his Black Crow Tattoo and Gallery at 426 E. 7th Street.

A pop art Mickey Mouse, a Banksy-inspired stencil design, a whimsical popsicle, these are just a few of the many designs that are part of a brand new mural near Fourth Avenue.

The Living Mural, which went up two weeks ago on the 40-foot exterior wall of Black Crow Studio, 426 E. Seventh St., is meant to be an ever-evolving showcase of works created by artists of all skill levels and ages, particularly for emerging artists.

"They come down and pick a time slot and pick a place and they get to do what they're passionate about," says Jason Lee Nolan, a long-time artist and owner of Black Crow Studio. "You can see their personalities shine through on their mural and they get to leave with a sense of accomplishment and people get to view their artwork when normally they would have their house filled with art that no one ever gets to see."

Nolan has operated his tattoo studio from the building for several years and says the wall is constantly being tagged and sprayed over.

"My landlord got tired of seeing graffiti and asked if I would do something that was just nice to look at, so instead of just doing something for myself, I did something for everyone else," he says.

There are more than two dozen spaces on the wall ranging in size from 8-by-10-inches to as large as 5-by-5-feet for artists to fill with their designs. Nolan even added several spots toward the bottom of the wall at just the right height for kids who want to add their creations.

"We'll just continually move to more spaces or cover old spaces, so nothing will ever stay the same," he says. "The background is going to change colors and have things going on like a sunset or cool patterns or designs or stencils or graffiti. So all types of art is going to happen on this wall eventually."

As paint fades or paintings are defaced, they'll get a fresh coat of paint and will be a blank canvas for a new design.

So far about seven spaces have been filled and Nolan is updating the mural's Instagram page @thelivingmural every couple days as new works are added.

"All of the Instagram photos are the artists, and a little bit about their art and their user handles so that people, if they like it, they can book them to do art for them or they can sell one of their pieces," he says.

Rock artist Amanda Hinton, whose preferred canvasses — smooth and sparkly Santorini stones are usually no bigger than 8-by-10-inches — chose one of the larger spaces on the wall, a 4-by-4-foot spot for a black and white detailed painting of an eyeball with enviable long lashes.

"I see eyes as our ways of communicating," Hinton says. "My son didn’t speak until he was 4½ and even then I couldn’t understand him so a lot of the communication we had was just through eye contact."

Hinton picked up rock painting about four years ago and is completely self taught. This is the first time she's ever painted anything that large.

It took Hinton about 11 hours over the course of two weeks to finish her painting. She says she's now more confident in her ability to create a large-scale painting and says were it not for this opportunity she wouldn't otherwise have had the chance to create a mural.

"No one would have ever asked me to do that downtown, I'm not known," she says. "It's been really cool for my family (to see), they geeked about it."

Anyone can add a mural to the wall by reserving a space with Nolan and all skill levels and designs are welcome. Artists who reserve a spot are asked to complete their piece within two weeks and only work on it on Sundays and Mondays when the studio is closed and the parking lot is empty. Otherwise the sky's the limit and there's only two rules: no nudity and no profanity.

"It's going to be viewed by people of all ages so long as you stay in those guidelines, you're fine," he says.

Nolan hopes other business owners in the area will be inspired by the mural and offer up their walls for art.

"My goal is to have this catch on so that this type of mural can exist too amongst all these really fancy nice murals that get lots of media attention, which is nice for the business, and for that artist, but does nothing to perpetuate more murals to feature artists," he says.

Nolan, who used to do graffiti art as a teen in the mid-to-late '90s says at that time businesses downtown and on Fourth Avenue had something kind of similar, called legal walls.

"A legal wall means that as long as you have permission from the business owner, you could paint on their wall, and the cops couldn't harass you," he says. "Graffiti was pretty bad back in the day in Tucson so taggers would tag up everyone's wall, and people started hating us."

Then the city started a graffiti task force and a graffiti abatement program and the legal walls disappeared, he says.

If businesses wanted to have murals on their walls they had to apply for and pay for a permit and many didn't want to, Nolan says.

"Now murals are a big thing, Tucson just recently approved 20 murals by a bunch of artists that are kind of local and what it's doing is showing the rest of the nation that Tucson is one of the big cities, that we do keep up with all this," he says. "But the one thing that they're forgetting is that they keep hiring the same six or seven artists."

Nolan says it's hard for artists who are just starting out or aren't well known to get into a gallery or have other opportunities to share their art. The Living Mural provides a place for anyone who wants to create the chance to have their work seen.

107 amazing Tucson murals and where to find them

These summer camps provide kids with plenty of opportunities for creative expression through visual arts, drama and crafting. They'll have the chance to make wearable masterpieces, star in a play, or get a taste of all mediums and styles of art.

The newly opened Old Pueblo Cellars on Tucson's northwest side offers private tastings of six varieties of wine grown in a vineyard just steps from the tasting room. Owner Roger Pelton says it's the only tasting room and vineyard open to the public in Tucson.

Things to do this weekend May 5-9 2021 in Tucson, Arizona including virtual events, drive-ins, drive-thrus, open-air events, at-home things to do and things to do with kids.

MJnailz Academy was opened last fall by nail artist Miranda Richardson and is the only school in Tucson dedicated to educating nail technicians.

Life Under the Oaks Lavender Farm in Oracle, will host open farm days starting in May when the lavender starts to bloom in Arizona. Other events include a retreat, fairy festival, workshops and special dinners.

After being closed to the public for decades, the historic Teatro Carmen in Tucson, Arizona's Barrio Viejo will host a one-day sale of assorted fixtures, furniture, and antique items.