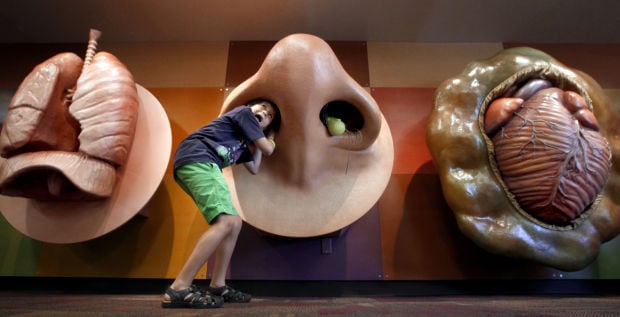 Carlos Espriella goes all in his investigation of a giant sized nose, part of the Bodyology exhibit at the Children's Museum Tucson.

Armory Park had little vegetation when the Carnegie Free library was opened in 1901. Tucson had a lot of readers, though. The library checked out 1,243 books in October 1902. 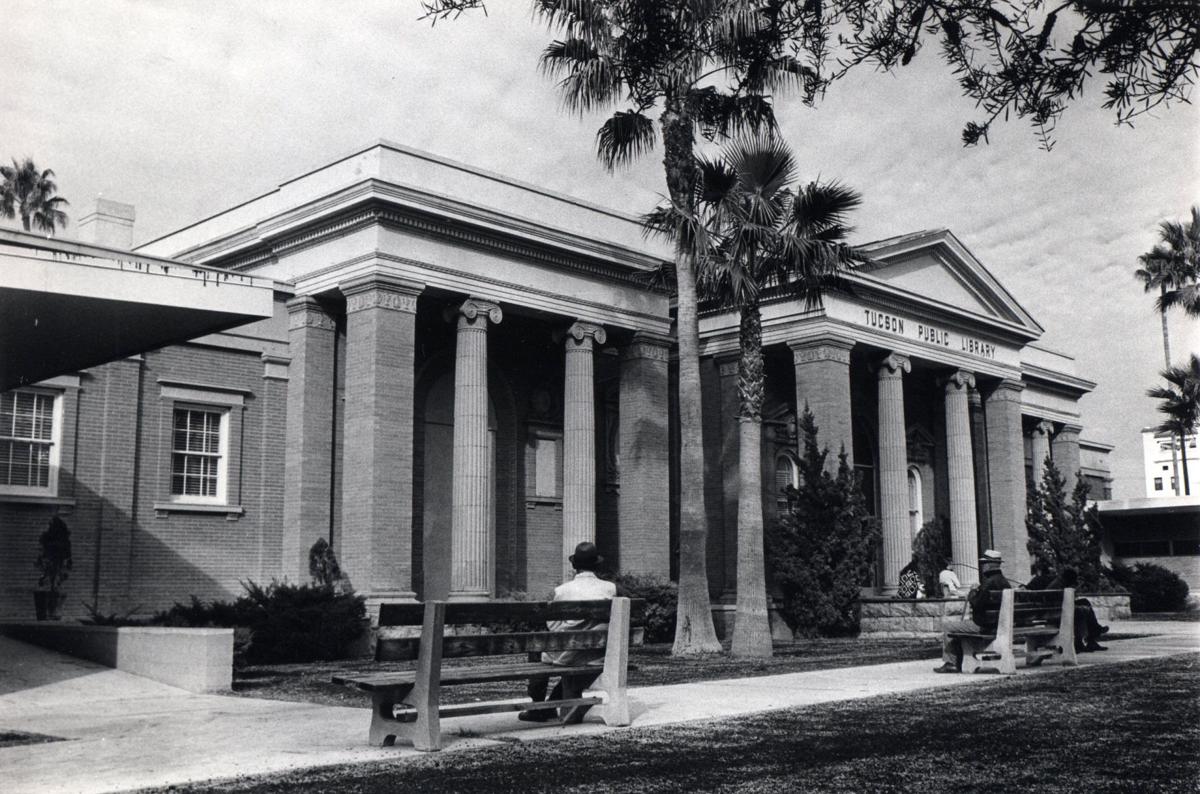 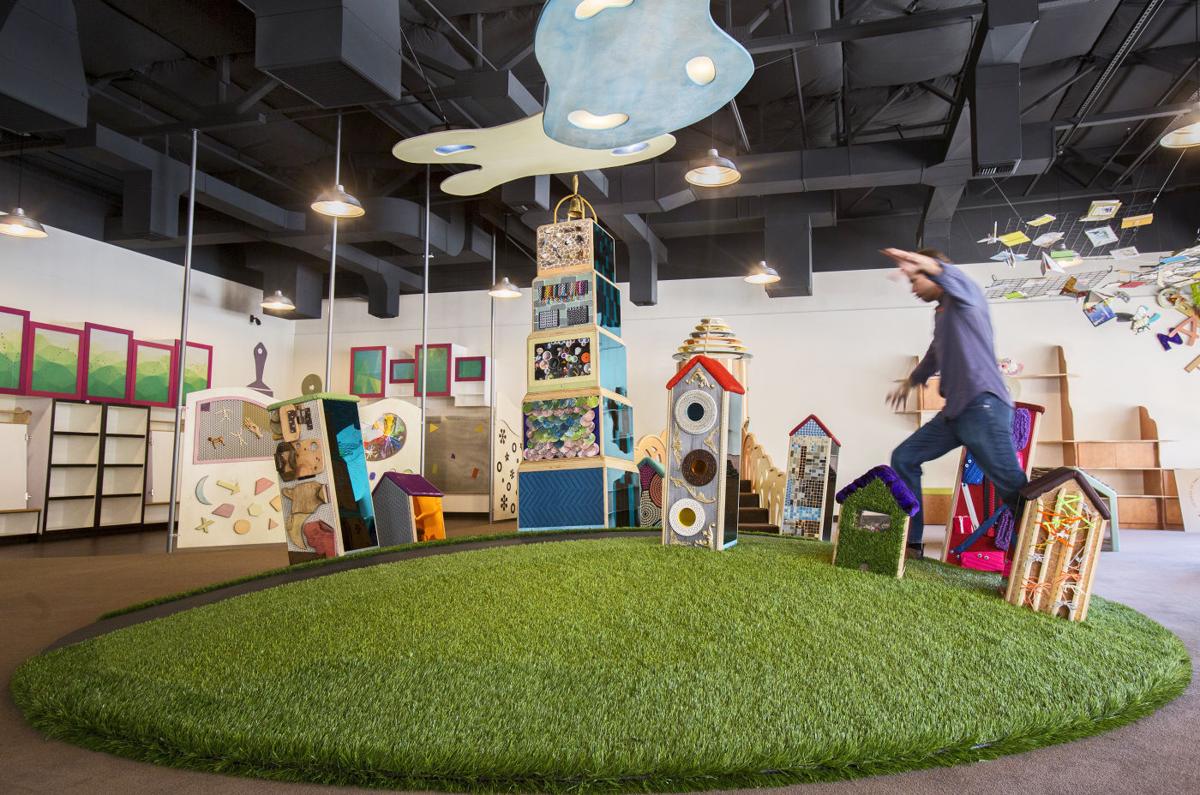 Kevin Mills, director of exhibits, runs through Toddler Town at the facility at 11015 N. Oracle Road. The facility has 3,300 square feet of space full of interactive exhibits. 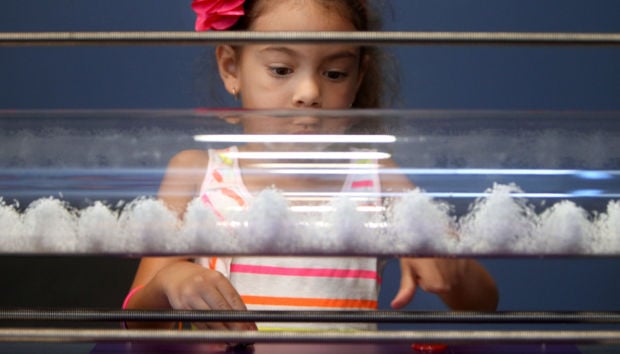 Chloe Atkins watches a physical representation of sound waves as she works one of the displays in the Investigation Station room at the museum. 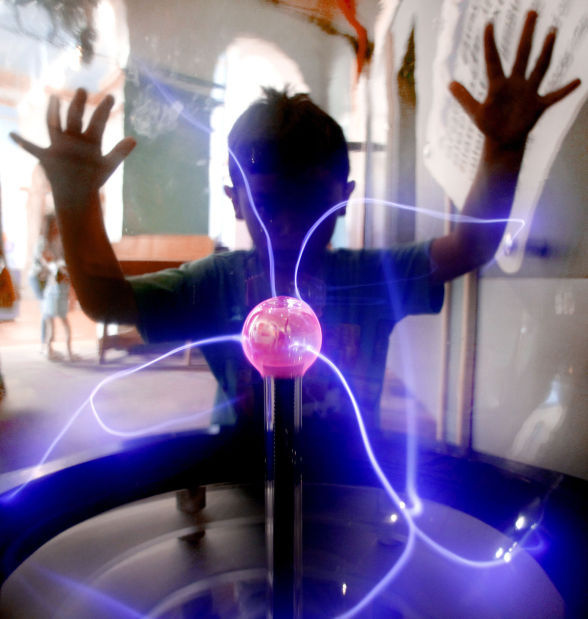 The Children's Museum Tucson is among 30 finalists for a national award that recognizes institutions that offer innovative approaches to public service. 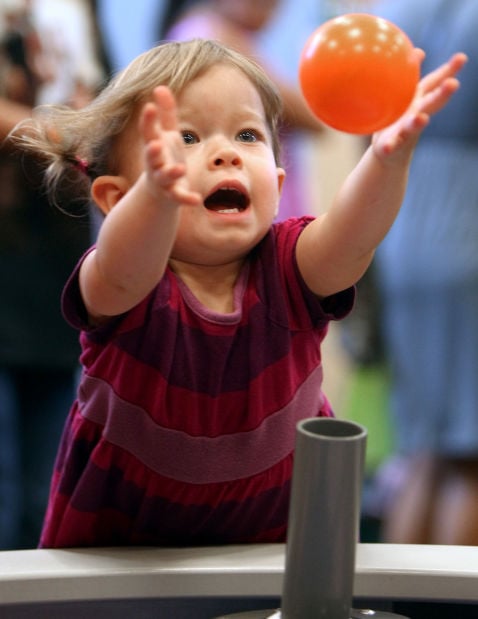 We don't know if she ever caught it, but Eleanor Corrigan put her whole self into the effort. This ball was floating on a column of jetted air in the Investigation Station room at the Children's Museum Tucson. 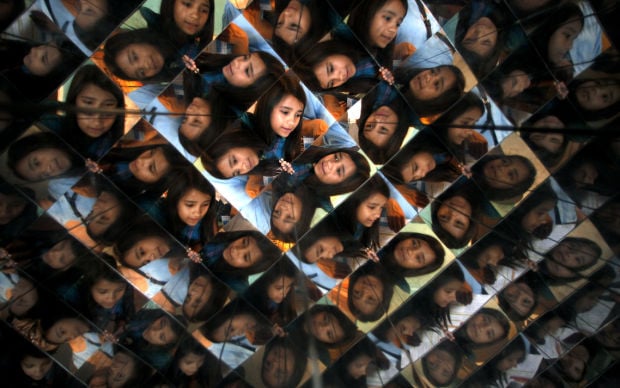 Take a look at the multiple, various and yet somehow identical Carmela Brienzas. Carmela was investigating a kaleidoscope on display in the Electri-City exhibit at the museum. 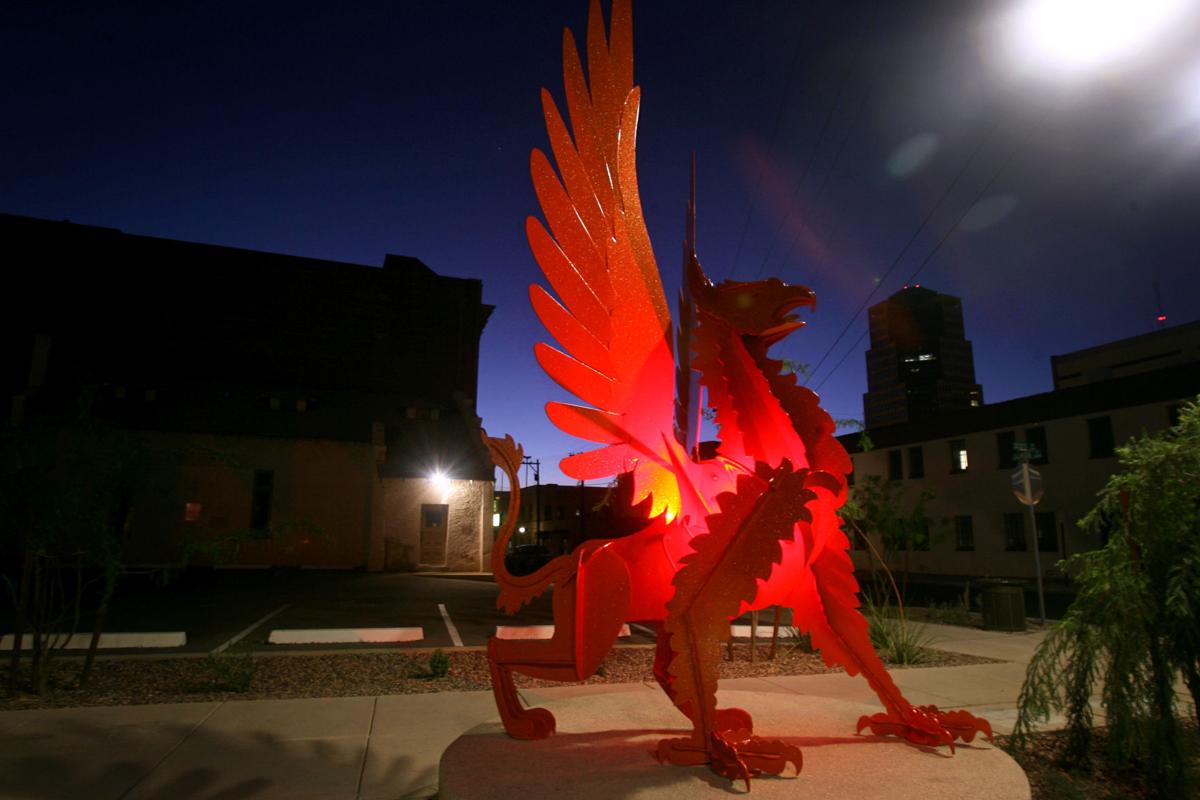 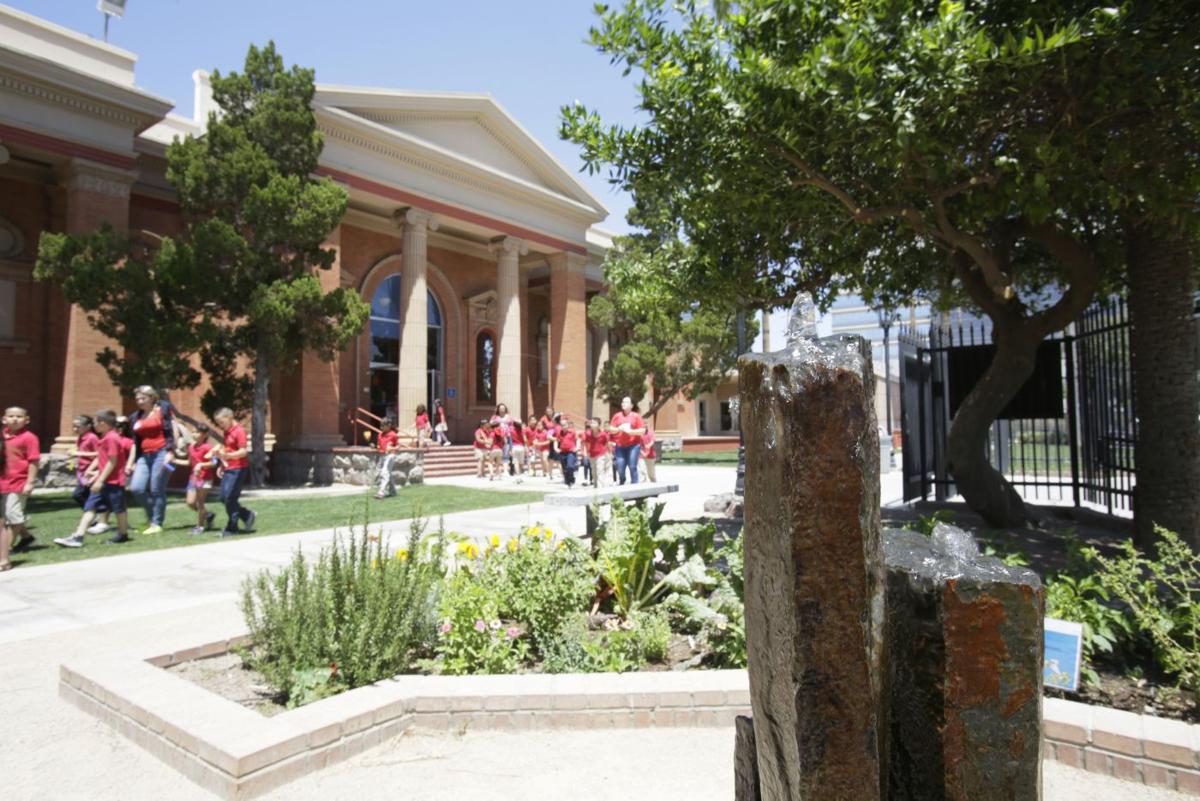 A water feature is just inside the fence of the courtyard at the Children's Museum Tucson. Photo taken Wednesday, May 21, 2014. Photo by Ron Medvescek / Arizona Daily Star. 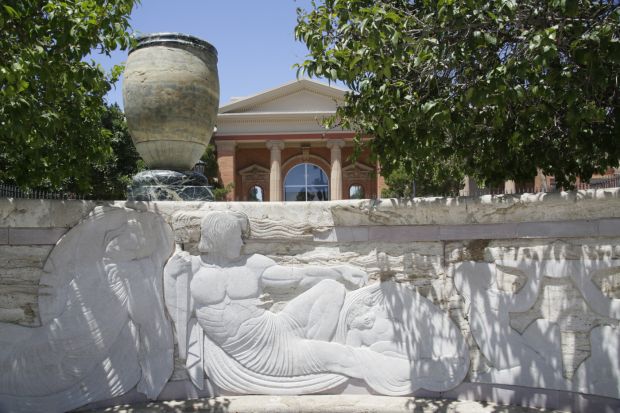 This is the bench in front of the Tucson Children's Museum. Photo taken Wednesday, May 21, 2014. Photo by Ron Medvescek / Arizona Daily Star. 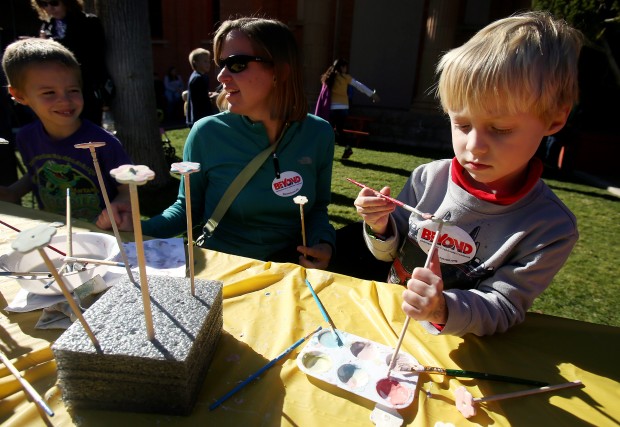 Owen Brosanders, right, 5, paints a piece of clay that will become part of a Ben's Bell during the BEYOND Tucson Main Event on Saturday, Jan. 5, 2013, at the Children's Museum Tucson in Tucson, Ariz. The museum hosts several free community events for families each year.

Carlos Espriella goes all in his investigation of a giant sized nose, part of the Bodyology exhibit at the Children's Museum Tucson.

The Children's Museum Tucson is among 30 finalists for a national award that recognizes institutions that offer innovative approaches to public service.

We don't know if she ever caught it, but Eleanor Corrigan put her whole self into the effort. This ball was floating on a column of jetted air in the Investigation Station room at the Children's Museum Tucson.

This is the bench in front of the Tucson Children's Museum. Photo taken Wednesday, May 21, 2014. Photo by Ron Medvescek / Arizona Daily Star.

From the welcoming green courtyard to the prestigious historic building, you know you're somewhere special before you even walk through the doors of the Children's Museum Tucson.

It's come a long way since its humble beginnings 30 years ago in a one-room building in Fort Lowell Park as the Southwest Children's Discovery Center.

The museum is the oldest in the state, said Teresa Truelsen, its director of marketing.

"We are happy to have been here 30 years and we hope to be here 30 more," Truelsen said.

During its 30 years, it has moved, renovated, rebranded and embraced new technology and exhibits, as well as hosted countless events.

"We offer a lot for families. Our goal is play based learning. Even if the kids don't realize they're learning," Truelsen said. "The important thing about us is that we are educators."

The board and staff are especially proud of the continued improvements to the exhibits and the expansion of its educational programming said Michael Luria, executive director of the museum.

"The museum is a relatively small organization, with respects to our budget and the number of staff we have, and what we have collectively been able to achieve on behalf of the children and families we serve is gratifying," Luria said.

A new exhibit will make its way to the "Techtopia" room in the near future, where kids will be able to jump and dance above a pattern as it's recorded. They'll be able to replay it and put it in slow motion to compare their tricks with their friends, Truelsen said.

A "Build It" area boasts stuff to build with and a rocket station where the kids turn a crank until enough pressure builds to launch the rocket made from a plastic bottle through a tube.

Two new exhibits have been added to the "Investigation Station" area — one on the distribution of weight and mass and the other on balance.

At one time, filled with animatronic dinosaurs, the area now hosts a slew of hands-on STEM based exhibits to get kids investigating in the categories of science, technology, engineering and mathematics.

"You always have to come up with new exhibits to stay fresh for families who come back regularly," Truelsen said.

Choosing a favorite exhibit is like being asked to pick a favorite child for Luria. But, he says the Imaginarium Art Studio and Wee World make the top of his list.

"The creativity that comes from the kids in the art studio always amazes me and I love seeing our youngest visitors — 4 and under — explore and discover in Wee world," Luria said. "You can literally see the wonderment and excitement in their eyes."

The museum is hosting an event to celebrate its 30th anniversary with $3 admission all day, hands-on activities and free ice cream — while supplies last — on September 30. Plus, Mr. Nature will be there with his instrument petting zoo from 10:30 a.m. to 1:30 p.m.

Click the link below to add the celebration event to your calendar:

10 things didn't know about the museum

While you may be familiar with the museum's many exhibits — especially the newer ones — you might not know everything about its history or what else it has to offer.

When we say this building is historic, we mean it. Here are some highlights:

If haven't noticed, there are footprints in the sidewalk, walking away from the museum to the Griffin sculpture, aka Toby, on Scott Ave. They represent a griffin that escaped and walked away during renovations in 1938, when the griffins that were originally perched on the corners of the Carnegie Library were removed.

Andra's Garden grows fresh vegetables that Janos Wilder uses at Downtown Kitchen + Cocktails. It includes a fountain and a bench. It is dedicated to Andra Dalrynple, who died of a heart condition when she was 12.

Hanging in the trees of the courtyard are wind chimes made of various recycled items, like kitchen utensils and pots and pans. There's a scavenger hunt that challenges you to find items within the chimes. Find the scavenger hunt sheet in the hallway by the train room.

A newly constructed music garden with drums, xylophones and a contra bass are also outside in the courtyard. Anyone is welcome to play the instruments.

"I have heard people out here who know how to play music," Truelsen said.

It's shaded, so don't worry about the sun.

Done in conjunction with Ben's Bells, the Butterfly Garden is an installation of tile butterflies and beads. It serves as a memorial to children who died during the Holocaust.

Each butterfly carries a child's name and were painted by the children and families who visit the museum, as well as Holocaust survivors in our community. It's part of the Butterfly Project, a global program that uses the Holocaust to teach tolerance.

6. You can volunteer there

Teens ages 15 and up and adults can volunteer at the museum. Volunteers help behind the scenes, prep hands-on arts and crafts and clean exhibits and museum spaces, as well as help facilitate activities, interact with visitors and help with guided tours and birthday party activities.

Students can use the experience for their required community service hours. The museum will work around school or work schedules. Click here for available volunteer positions and to fill out an application.

At 1:30 p.m. every Wednesday, there are experiments designed for the little ones. There's a different science based activity every week. On a recent week, the kids got to make "exploding paints." It's not as scary as it sounds. When you put paint and alka seltzer in an old film canister and seal it, it eventually explodes onto the paper, creating a fun painting.

Every Saturday at 1 p.m., the museum does a science project with families. "It encourages families to come together and see that science is every where," Truelsen said.

Past events include making robots and building roller coasters. It's done in a "very accessible level so everyone can learn something," Truelsen said.

Each Tuesday, Thursday and Sunday at 1 p.m. a "discovery guide" brings a science cart out for hands-on science experiments with the kids.

Part of the museum's focus is to be accessible to everyone. So, it offers free programs and discount days to help families who might not otherwise be able to go.

Current discounts are $3 admission on the 30th of every month for the rest of the year and $3 admission every Sunday through Sept. 4.

It also has free days for the community, such as the Love of Literacy day September 17 and Family SciFest February 4.

9. You can have your child's birthday party there

Who wouldn't love a birthday party at the children's museum? Packages start at $225 for non-members.

The basic package includes two hours in the birthday room, 20 guests included, an activity led by a discovery guide, balloons and table covers.

It features 3,300 square feet of interactive exhibits that focus on early childhood education and school readiness, geared toward little kids ages five and under.

There are daily activities planned, such as storytime and Wee Play, which includes a story, sensory activity and a craft.

Admission is $6. Children ages one and under get in free.

Click here for a daily calendar and more information.

The museum's birthday means fun for your family.

Get your plant on at the Monsoon Madness Plant Sale

Here are five reasons to go

If your kids love science, they won't want to miss this

You guys. It's free!